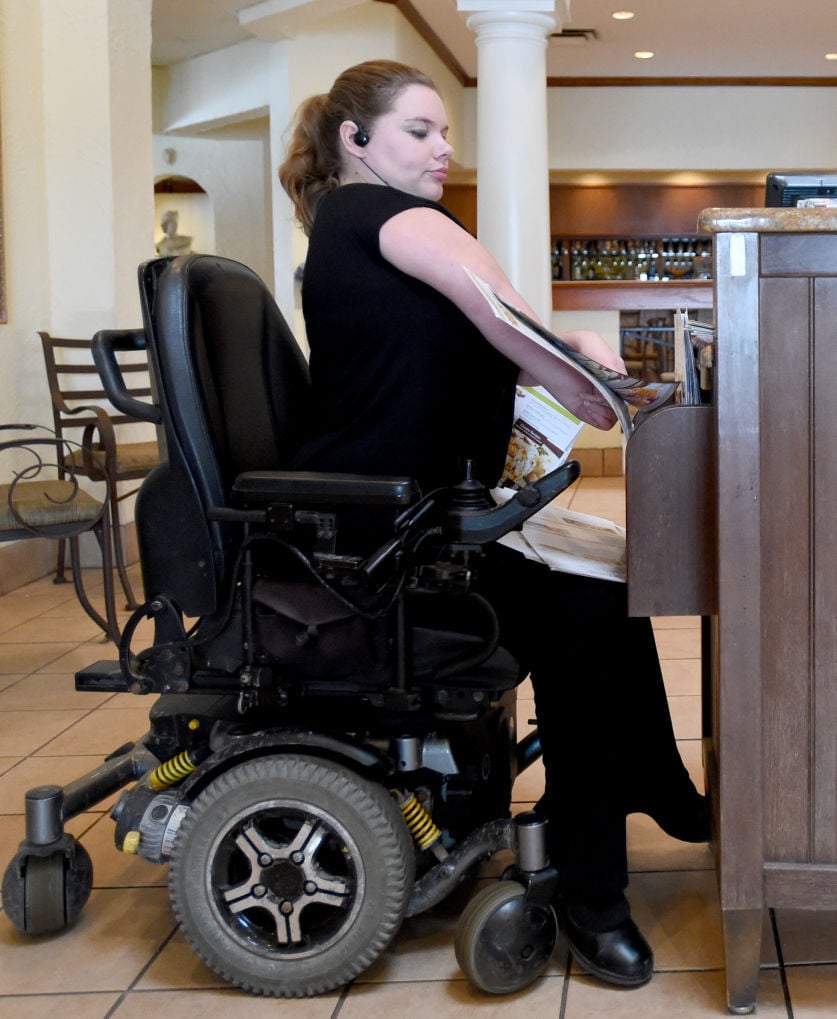 Gabrielle Clapp puts away menus on Wednesday at the Olive Garden restaurant at 6000 Durand Ave. 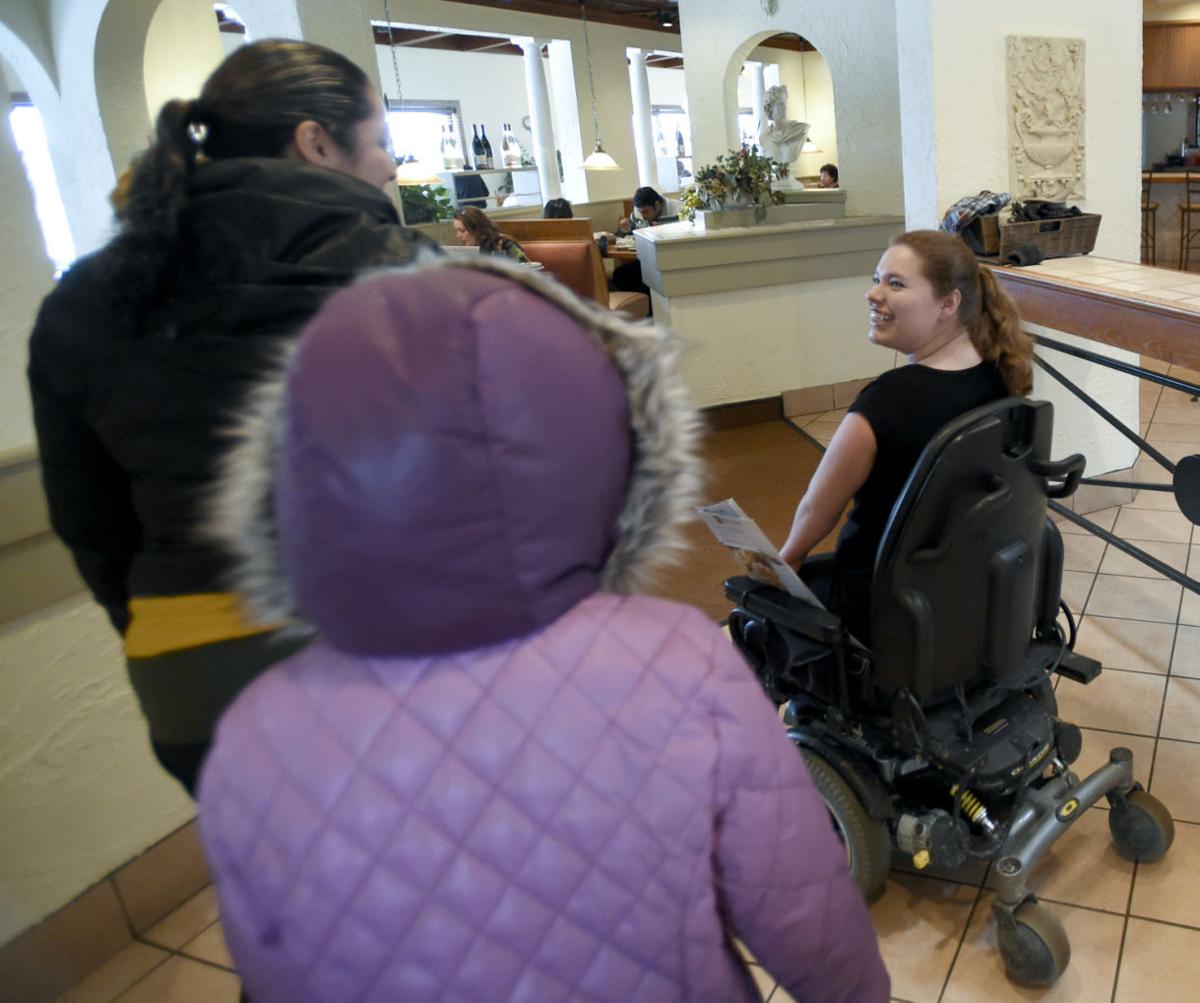 Gabrielle Clapp talks with customers as she shows them to their table on Wednesday at the Olive Garden restaurant at 6000 Durand Ave. 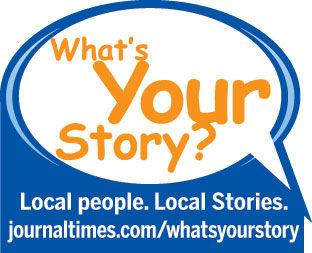 RACINE — Gabrielle Clapp, 24, was always encouraged to do things on her own when she was growing up.

It’s a philosophy she continues to live by and what led her to her job at Racine’s Olive Garden, 6000 Durand Ave., where she has been a hostess for nearly two years.

“I’m not the type of person to sit on my butt,” said Clapp, of Burlington. “I want to do something with my life.”

She was born with a condition called arthrogryposis, which prevented many of her muscles from properly developing and is the reason she uses a wheelchair.

It means she has never been able to walk unassisted. It causes her hands to bend inward at the wrist and limits her hand functions.

But that has never stopped Clapp, who has a bachelor’s degree in restaurant, hotel and tourism management from the University of Wisconsin-Stout and had an internship at Disney World while in college.

Ideally, Clapp said her dream job would be to travel around the country going to resorts to see if they are compliant with the Americans with Disabilities Act. She has been to a number of places that haven’t been compliant and she has been frustrated, she said.

Thankful for a job

After she graduated from UW-Stout in December 2012, she applied to jobs all over the region – resorts and restaurants. She had many interviews and received calls back, but then no job offer would come.

When Olive Garden called her with a job offer, she started crying, she said.

She was so relieved and excited, said Clapp, who works about 16 hours per week as a hostess at the restaurant during the lunch shift.

“I’m just thankful to have a job,” said Clapp, who uses a First Transit bus to get to and from work.

Jeff Zimmerman, the general manager at the Racine Olive Garden, said Clapp is held to the same standards as all employees. As a hostess she greets guests, seats them, provides menus, and enters information into the restaurant’s computer system about seating.

“They are literally responsible for the whole flow of the restaurant,” Zimmerman said.

He wishes he could have more employees with the positive attitude Clapp has.

“She is phenomenal and probably one of the most recognized team members we have,” Zimmerman said of Clapp.

Because she is a part-time employee, she still receives some Social Security disability assistance, but she hopes to eventually not have to receive any government assistance.

“I want to be fully independent,” she said.

She grew up in a two-story house until about age 6 and her room was upstairs. She had to get herself up the stairs by scooting, she said; no one carried her.

Also she had chores just like her two older sisters. She had to clean her room, dust and take turns cleaning the bathroom, said Clapp, who graduated from Burlington High School in 2008.

“They were always pushing me to be more independent,” Clapp said of her family. “For that I’m grateful.”

Tell Us a Story

“What’s Your Story?” is an occasional series highlighting the stories of people in Racine County. If you know someone whose story should be featured, write us at bridget.thoreson@journaltimes.com or What's Your Story?, Local Editor Bridget Thoreson, The Journal Times, 212 Fourth St., Racine, WI 53403.

Racine man’s journey from pianist to homeless and back again

RACINE — Walk into Living Faith Lutheran Church on a Saturday and you may think you have walked into a classical music venue.

RACINE — Michael Neal, 31, showed up for his job interview at Pick ‘n Save wearing a kilt.

RACINE — If you walk into Racine’s City Council chambers any first or third Tuesday night of the month, there are a few things you are guarant…

BURLINGTON — Sixteen-year-old Nehemiah Peterson of Burlington is only good at one sport.

BURLINGTON -- Anne Danko remembers being struck by a tall dapper gentleman when she walked into Old World Wisconsin 20 years ago.

Gabrielle Clapp puts away menus on Wednesday at the Olive Garden restaurant at 6000 Durand Ave.

Gabrielle Clapp talks with customers as she shows them to their table on Wednesday at the Olive Garden restaurant at 6000 Durand Ave.