RACINE — John Hoch was expecting a battle Tuesday night. And that’s exactly what he got from a rebuilt St. Catherine’s High School boys basketball team that appears to be exceeding all expectations.

While Hoch directed his talented Milwaukee Saint Thomas More to a 70-59 overtime victory in a Metro Classic Conference game in the John F. McGuire Gymnasium, he was downright impressed by what he saw from coach Ryan Thompson’s St. Catherine’s team.

Here the Angels graduated all five starters from their WIAA Division 3 championship team, yet they’re giving everyone on their schedule all they can handle. That includes 11-1 Saint Thomas More, which is ranked No. 4 among small schools in the first Associated Press poll of the season.

“After losing seven of their top eight guys, Ryan has found the right combination,” Hoch said. “He plays a lot of guys and they play with such energy. And he’s developed three great shooters.”

One of those shooters is 5-foot-11 senior guard Alijah Matthews, who saw sparse playing time last season behind the All-State backcourt of Tyrese Hunter and Kamari McGee.

Coming into the game averaging a team-high 13.8 points per game. Matthews scored 21 of his 26 points in the first half and went 5 for 6 from beyond the 3-point line.

“He ran the whole offense,” Davion Thomas-Kumpula said of Matthews. “He got people open, he created his own shot, he played good defense and he’s the one who got us going.”

When asked to assess his performance, Matthews said, “I’d say they face-guarded me more in the second half, but it was more me getting cold. My teammates stepped up for me when that happened, so I was happy to have them finish it off for me at the end.”

But it was Thomas More who had the final say on this night.

Doing most of the damage were the Cavaliers’ Mr. Inside and Mr. Outside — 6-5 sophomore forward Amari McCottry, who is already receiving NCAA Division I attention, and 6-0 senior guard Drew Reindl. They combined for 50 of Thomas More’s 70 points.

McCottry was especially a load, scoring 22 of his game-high 28 points in the second half and overtime. Nine of his points came in overtime, when Thomas More outscored St. Catherine’s 15-4. McCottry added 11 rebounds, four steals and two assists.

“I’m pleased with him because he had a real horrible faux pas early in the game when he got very excited and he got T’d after a dunk,” Hoch said. “He should have never done that and I hope he learns from it.

“That cost us when he got his second foul and then had to sit for like nine minutes in the first half. Earlier this year and especially his freshman year, that would have affected him mentally in the second half, and it didn’t this time.”

Still, St. Catherine’s appeared to be putting itself in position for the upset. Entering the second half with a 37-35 lead, the Angels took a 41-33 lead on a 3-pointer by Domonic Pitts with 16:02 to play.

But with Matthews cooling down and McCottry heating up, Thomas More (6-0 MCC) quickly rallied back and the score remained close throughout the rest of regulation.

St. Catherine’s defense held after Matthews made two free throws with 21.1 seconds left in regulation to tie the score at 55-55.

But once the game went into overtime, McCottry took over. St. Catherine’s only points came on a 3-pointer by Evan Moherek and a free throw by Matthews.

Still, it was another competitive performance by the Angels, who start just one senior in Matthews. Already this season, they knocked off state-ranked Kenosha St. Joseph and lost by one point to Division 1 Case.

In fact, when Thompson was asked for what he considers to be his team’s weakest performance this season, he mentioned a victory. That was Nov. 30, when St. Catherine’s led Elkhorn 35-20 at halftime and then hung on for a 76-71 victory.

The bottom line is, Thompson has taught his young team to expect success.

“The thing is, our kids really enjoy being around each other, they work really, really hard and they’re gym rats,” Thompson said. “When we practice, guys are here a half an hour early and then you’ve got to kick ‘em out of the gym when it’s time to go home.

“We’re a little better than what people expected, we’re a tough team and all our losses have been good losses.”

"After losing seven of their top eight guys, Ryan (Thompson) has found the right combination. He plays a lot of guys and they play with such energy. And he's developed three great shooters." 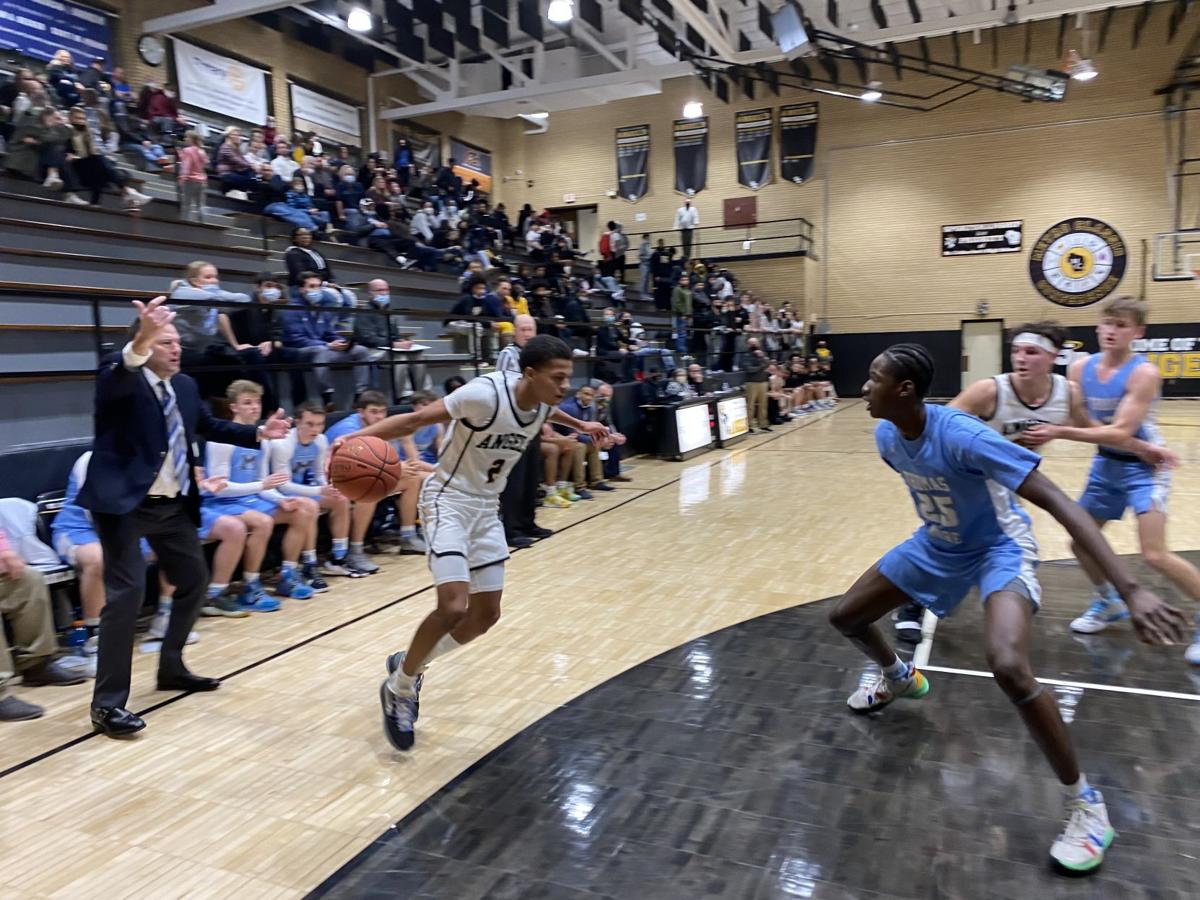 Alijah Matthews prepares to make a move on Saint Thomas More's Sekou Konneh Tuesday night in St. Catherine's John F, McGuire Gymnasium. Matthews scored 21 of his 26 points in the first half, but St. Catherine's went on to lose 70-59 in overtime. 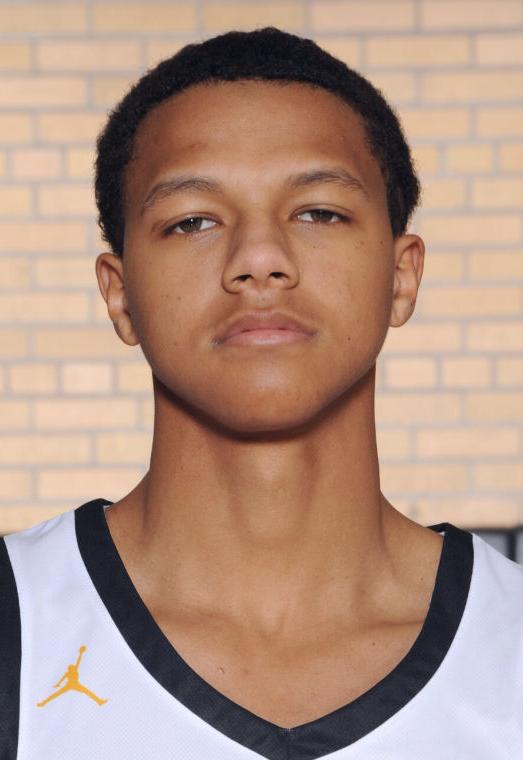 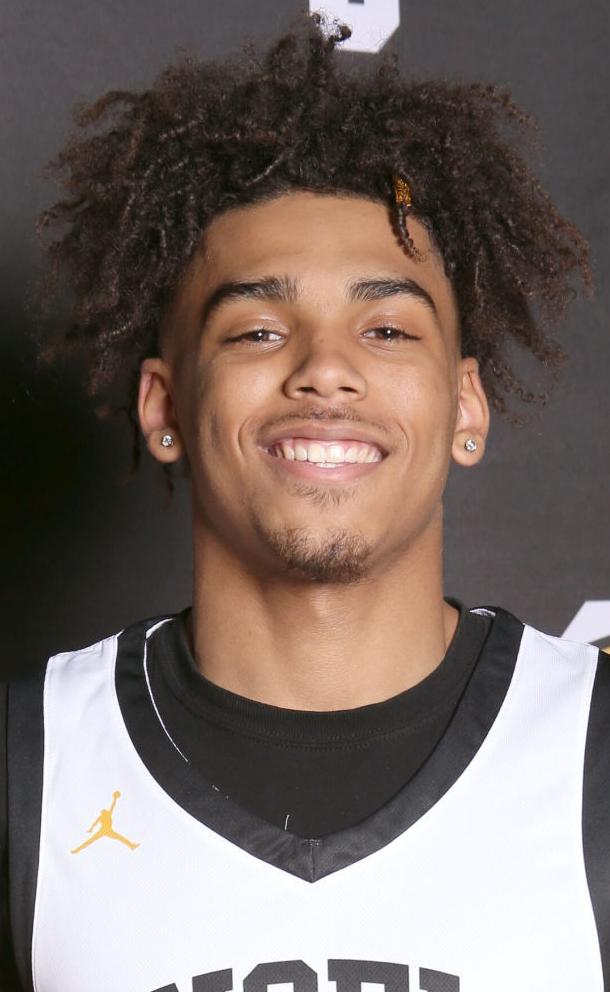