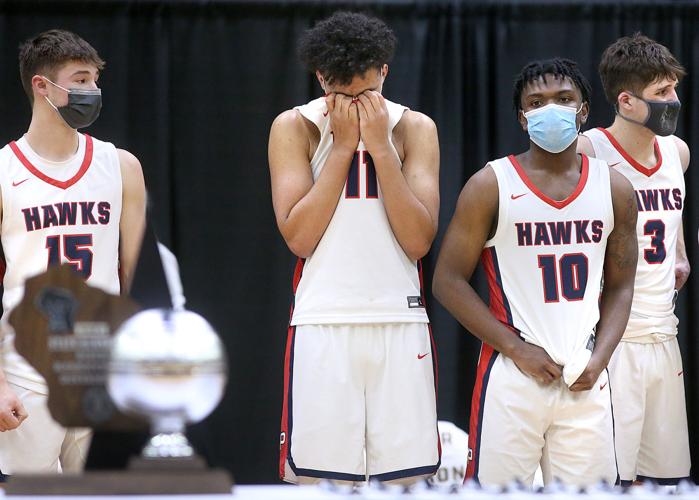 Prairie players Jayce Jaramillo, from left, Ashe Oglesby, Arjun Kumar and Kody Krekling react on Friday night after getting beat at the buzzer in the WIAA Division 4 state final to Oshkosh Lourdes, 43-41. 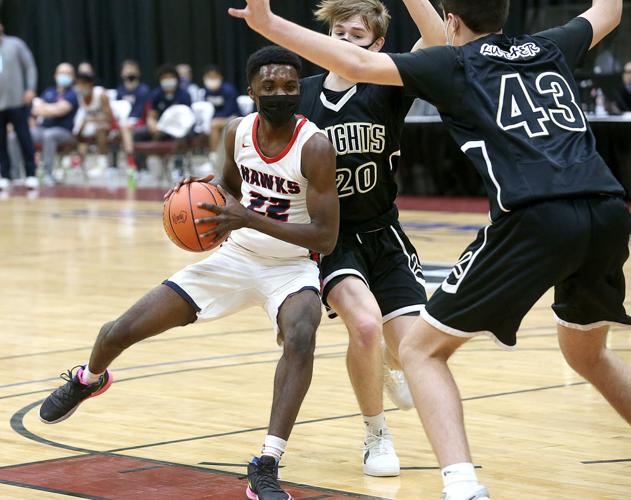 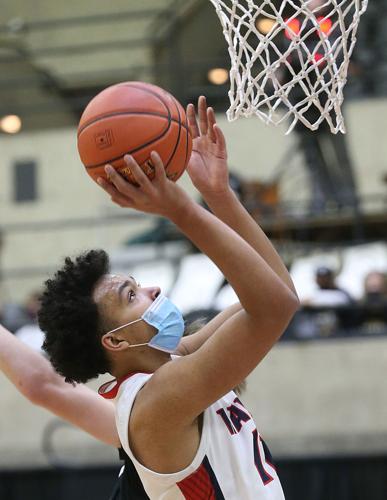 LA CROSSE — They gathered in the lane under the basket they shot at during the second half and put down a silver ball in front of them.

Seven dropped to knee as coaches and teammates stood behind them. Medals dangled around their necks as they started stone-faced at someone taking a team picture.

At that moment, all of them were still trying to figure out what had just happened on the La Crosse Center floor. The Prairie School boys basketball team was on its way to winning a WIAA Division 4 title less than 60 minutes ago, but it all fell apart during a 14-point second half.

The Hawks lost a big lead to Oshkosh Lourdes Academy and then the game when Nathan Slagter beat the buzzer with a shot under the basket to give the Knights a 43-41 championship victory.

“It happened slow,” Prairie coach Jason Atanasoff said of watching his team lose what peaked as a 19-point lead in the first half and reached 17 in the second. “They got it to 10, then they got it to three, then they hit a 3 to tie it up. We burned three timeouts during all of this, and then it went back and forth.”

“... You could kind of feel it (slipping away), but I wouldn’t say I ever lost confidence in my team. We’ve been in plenty of these situations this year and, more often than not, found a way to get it done.”

Second-seeded Lourdes (25-5) got it done in the end by converting offensive rebounds on their final two possessions after Jacob Fallico gave the top-seeded Hawks (24-4) a 41-39 lead on a 3-pointer with 2 minutes, 2 seconds remaining.

The Knights didn’t shoot the ball well at all in the first half, but picked things up in the second.

Senior Preston Ruedinger, however, missed a jump shot in an attempt to tie the game. Teammate Joshua Bauer was there for the rebound and easy basket with 1:45 to go as Lourdes forced the tie.

Prairie moved the ball and found Kody Krekling open for a 3-point attempt at the other end. Krekling, who made one earlier, missed the mark, and the Knights pulled down the rebound.

“Kody got a good look at a 3, and he’s been hitting them all year,” Atanasoff said. “Unfortunately, that one didn’t fall, and they held it.”

Bauer missed a 3-pointer from the left corner, but Ruedinger pulled down the rebound, and the Knights called a timeout with 39 seconds left.

Ruedinger fed Slagter with a bounce pass into the left side of the lane, and Slagter’s winning shot just eclipsed Antuan Nesbitt’s right hand as he went for the block.

“I felt like I was really close,” Nesbitt said of the attempted block. “I saw (Slagter) come off the screen and (Ruedinger) step up, so I decided to rotate over. He (shot) a really high floater, and I jumped. I was really close to the ball, but I wasn’t able to get it.”

Nesbitt scored a team-high 12 points for the Hawks, while Asanjai Hunter added 11 and Krekling 10. Ruedinger and Bauer scored 13 apiece to lead Lourdes.

It was an unlikely ending to a game that went the opposite way for the entire first half.

The Hawks scored the first 15 points by rebounding well, forcing turnovers and getting into transition. Prairie scored the 14th and 15th of those points on a Nesbitt slam dunk that was set up by Krekling off a rebound.

Nesbitt later set up Hunter and Krekling for easy baskets after rebounds and one-handed passes down the court for a 23-4 advantage with 9:14 left in the half.

But as soon as the Knights started making their second-half push, the Prairie offense became much more deliberate. Part of that was due to Nesbitt and Hunter picking up their fourth fouls within about 90 seconds of each other.

Ruedinger, who scored two points on 1-for-9 shooting with Hunter all over him in the first half, followed Hunter’s fourth foul with a 3-pointer and jump shot to give Lourdes its first lead at 35-33 with 5:38 left.

“I got them back in,” Atanasoff said of Hunter and Nesbitt. “But I think it really did take away some of our aggressiveness defensively.

“We also got a little stale on offense, but credit Lourdes for really getting after it defensively. They made some key shots at the end.”

Prairie got the championship game by beating Onalaska Luther 61-46 on Friday morning.

The Hawks prepared all week for the imposing size of Onalaska Luther’s pair of 6-foot-7 forwards.

The Hawks worked on shot fakes, head fakes, up-and-unders. Anything to get the Knights’ big men off balance. So when Prairie was able to find lanes into the paint during the semifinal, the team was confident in its ability to finish — and it showed.

Senior guard Antuan Nesbitt and junior guard Asanjai Hunter beat defenders off the dribble and scored inside, while the former dished off to sophomore forward Ashe Oglesby after multiple pick-and-rolls and used a smooth spin move into the lane for another bucket of his own.

The Hawks made the paint theirs, which helped them grab a 12-point halftime lead they wouldn’t let go of en route to a 61-46 win.

The Hawks had 42 points in the paint to the Knights’ 20. And 26 of those points came in the first half as Prairie built a 34-22 advantage.

But Luther held the lead a number of times early in the first half and was well within striking distance for much of the period.

After Nesbitt cleaned up his own miss midway through the first half, Knights senior guard Lyndon Byus made a 3-pointer from the right wing and senior Isaiah Loersch — one of Luther’s 6-7 forwards — followed with a bucket inside to put the Knights up 16-15 with 7 minutes, 44 seconds left in the half.

“I think Luther came out playing at an extremely high level,” Prairie coach Jason Atanasoff. “It was just size like we haven’t seen this year, with their smallest starter being 6-3.

“We knew we’d kind of have to weather that early storm with their size and physicality and it kind of being a home game for them.”

That’s what the Hawks did, and the dribble penetration that the Knights did well to limit early slowly opened up.

Oglesby used his long strides to blow by his defender on drive from the left wing after Loersch gave Luther the lead, and Hunter hung in the air and finished a take of his own. Senior guard KJ Williams then drove baseline and dumped the ball off to Nesbitt for an easy layup that put Prairie up 21-16 with 6:12 left in the half.

Hunter finished with 13 points on 5-of-8 shooting, while Oglesby added 11 points and eight rebounds.

The Knights got back within one point with about three minutes left in the half, but Nesbitt exploited another driving lane and converted a three-point play.

“He’s even better up close,” Luther coach Brad Schaper said of Nesbitt. “He is a great basketball player, but he’s got a great surrounding cast, too. But I’ll tell you what, that guy, he can shoot it, he can drive, he’s got one of the best spin moves that we’ve seen all season long.”

That three-point play sparked an 11-0 run to close the half, a run that was also aided by Prairie’s lethal transition play.

A few possessions after Nesbitt’s three-point play, Hunter grabbed a loose ball and outran a Knights defender and finished on the other end through contact. Oglesby then came away with a steal; he missed the breakaway layup, but Hunter was there to clean it up.

The Hawks continued to push the pace in the second half, and their guards hounded Luther on the perimeter. For the game, Prairie forced 17 turnovers and converted those into 19 points; the team also had 15 fast break points.

The Hawks’ lead grew to 15 points, then 19, then 23 with 7:21 to play when senior guard Malcolm Moses scored in transition after they broke the Knights’ press.

Prairie led by at least 13 points the rest of the way as its defense held strong.

The Hawks limited the Knights to 35% shooting from the floor and held junior Gavin Proudfoot — Luther’s leading scorer and its other 6-7 forward — to 13 points.

Prairie players Jayce Jaramillo, from left, Ashe Oglesby, Arjun Kumar and Kody Krekling react on Friday night after getting beat at the buzzer in the WIAA Division 4 state final to Oshkosh Lourdes, 43-41. 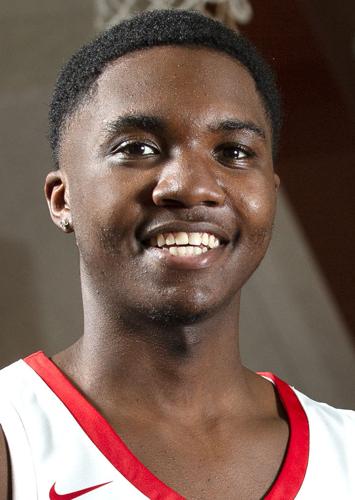 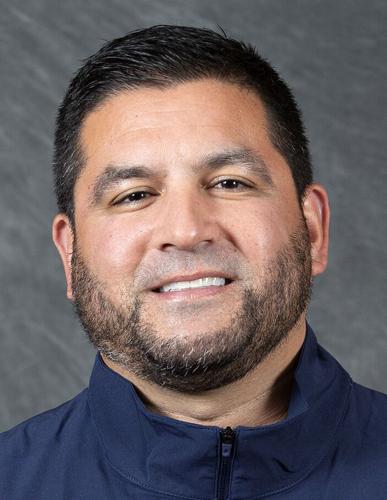 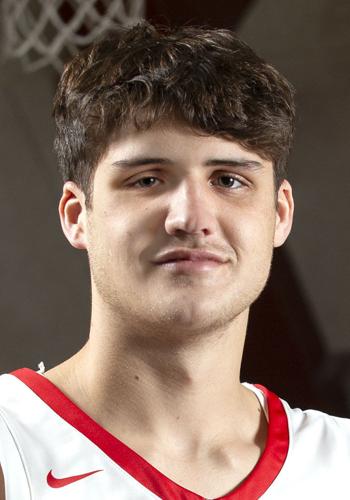 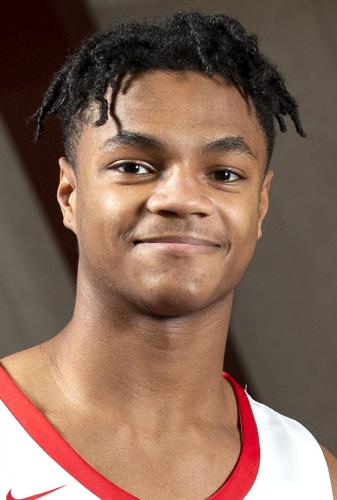 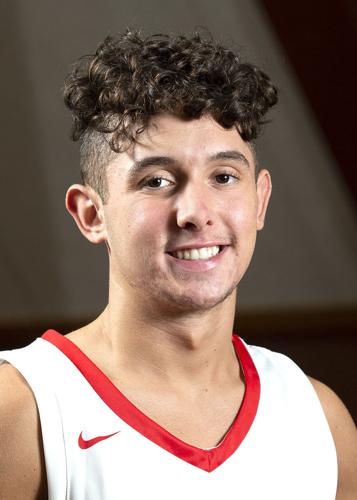