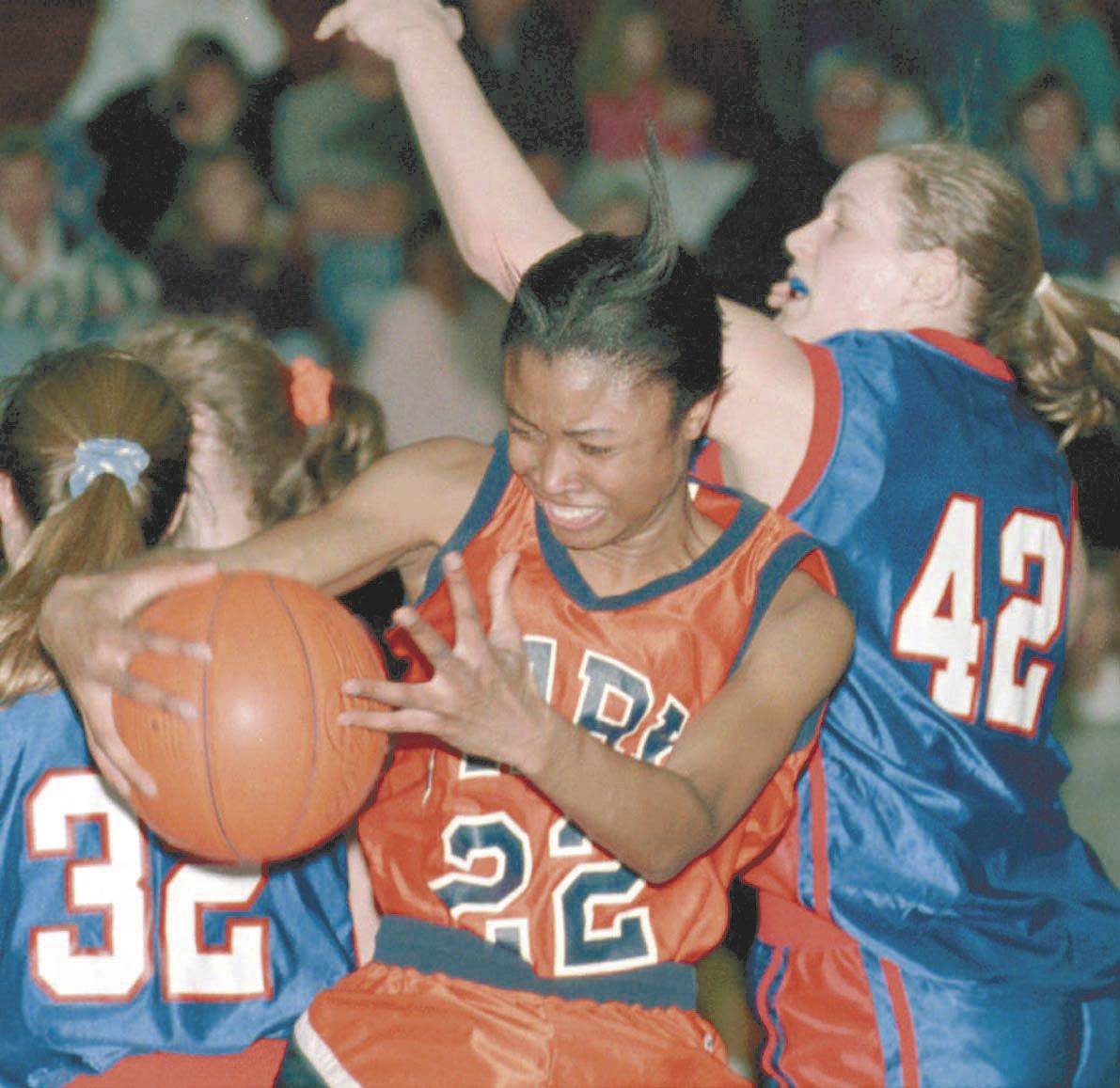 Center LaTonya Sims led Park to the 1997 WIAA Division 1 championship. She has been selected by Journal Times sportswriter Peter Jackel as the best girls basketball player from Racine County during the 1990s. 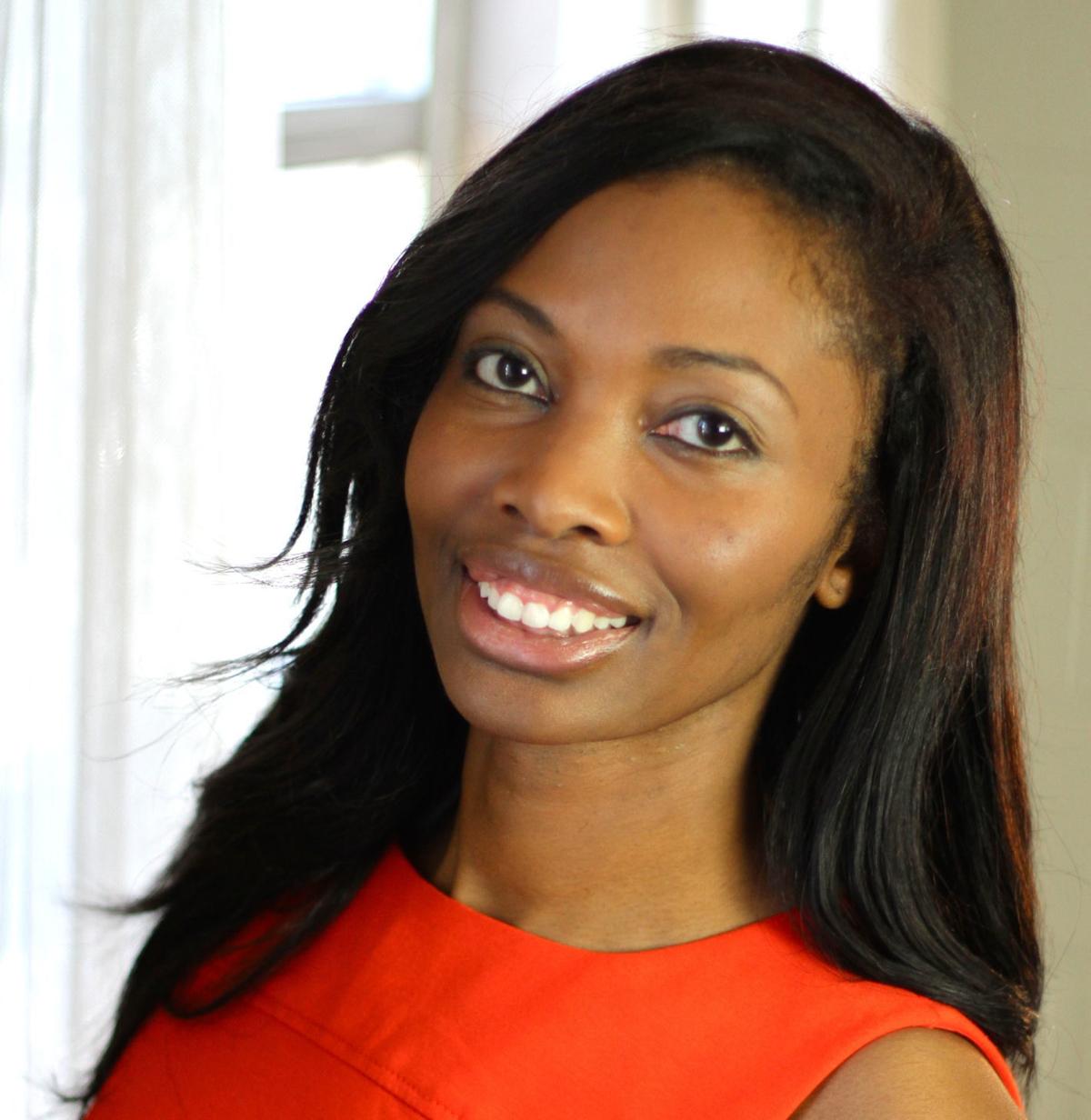 Playmaking guard Keisha Anderson started the Panthers’ run by being named the county’s player of the year in 1992. One year later, 6-foot-3 center LaTonya Sims joined the program and went on to be named the county’s player of the year three straight seasons from 1995-97 (a feat matched only by Case’s Samantha Logic from 2009-11). Matching that honor for Park in the decade were Amy Zelinger in 1998 and Julie Christensen in ‘99.

And, of course, the crowning achievement for this program was winning the 1997 WIAA Division 1 championship behind Sims, who was the unanimous AP Player of the Year in Wisconsin that season.

Just how strong was this decade? Horlick guard Arneda Yarbrough also was named the state’s player of the year, in 1991. And St. Catherine’s forward Abby Garchek, the fifth player chosen on the first team for this decade, also earned All-State honors.

Here is the best of the best from Racine County for the 1990s:

On the afternoon of March 15, 1997, Sims closed out her fabulous high school career with 26 points and eight rebounds at the University of Wisconsin Field House in Madison. And Park routed Milwaukee Washington 59-31 in the Division 1 championship game to complete a 25-1 season.

It marked the first WIAA championship by a Racine public school since the girls state tournament started in 1976. The only other state championship in basketball for Park during its 92-year history to date is the boys team in 1943.

Sims had been fourth-team All-State her freshman year and second team both as a sophomore and junior. But after Sims’ senior season, there was no question about it: She was the finest player in the state.

It was difficult to dispute that. She shot 55% from the floor and averaged 25.6 points, 10.1 rebounds and 3.4 steals. She scored 30 points or more in five games. And under the bright lights of the state tournament, she scored 78 points in three games — the third most by a Division 1 player at that time.

“However, the most impressive part of her season was the leadership and maturity she brought to the team. She became the ultimate team player.”

Sims, incidentally, gave Park two state players of the year in the same graduating class. The previous fall, offensive and defensive tackle Kevin Barry became the first football player from the county to earn that honor. Sims also was a first-team high school All-American and the fifth-rated prospect in the country.

And then she went off to play for Wisconsin, where she was the Big Ten Conference’s Freshman of the Year during the 1997-98 season. Playing power forward, Sims helped the Badgers to a 21-10 record after averaging 12.6 points and 6.9 rebounds per game.

She ranks sixth on UW’s all-time scoring list with 1,857 points and scored in double figures in 105 games, which second on the program’s all-time list. Sims earned first-team All-Big honors as a sophomore after averaging 18.0 points and 6.7 rebounds. She was second team as a junior and senior.

She was inducted into the Racine County Sports Hall of Fame in 2013.

It isn’t often when someone is named the AP Player of the Year in Wisconsin after not playing on the big stage of the state tournament that season. But that’s what this 5-5 point guard managed as a senior after averaging 16.7 points, 7.8 assists and 4.0 steals for the 19-3 Rebels.

Actually, Yarbrough was established by that point. She had played in the state tournament as a sophomore in 1989. And she earned second-team All-State honors and was the county’s player of the year her junior season after averaging 17.5 points, 6.5 assists and 4.3 steals in leading Horlick to a 22-2 record.

But her senior season was a trial. She dealt with a muscle pull in her calf the first few months of the season. She struggled with the pressure of recruiting before signing with Iowa in November 1990. But then she erupted for 33 points Dec. 29 in a 58-49 victory over Burlington and led the Rebels to a 16-game winning streak. Their season came to an end in a regional game against Park.

It was quite a career for Yarbrough, who entered high school in 1987, the same year Horlick legend Sonja Henning graduated. It might have been a great deal of pressure, but Yarbrough simply concentrated on being herself and forging her own identity.

“When I came here, people were expecting me to do everything Sonja did.” Yarbrough said in 1991. “But I just came here to be me.”

Yarbrough went on to play for one of the elite teams in the country at that time. She was a reserve as a sophomore for Iowa during the 1992-93 season that went 27-4 and advanced to the Final Four. The Hawkeyes lost to Ohio State 73-72 in overtime in a semifinal.

She started as a junior and senior and helped the Hawkeyes to records of 21-7 and 11-17.

It’s difficult to believe there were two better guards in the state early in the 1990s than Arneda Yarbrough at Horlick and Keisha Anderson at Park. The 5-7 Anderson was first-team AP All-State as a junior and senior and nearly followed Yarbrough as player of the year in the state. She lost by a 4-2 vote for that honor to Katie Voight, a 6-1 junior guard from Minocqua Lakeland.

But she was named “Miss Basketball” by the Wisconsin Basketball Coaches Association and was the Gatorade Circle of Champions Wisconsin High School Girls Basketball Player of the Year as a senior.

Anderson certainly earned those accolades. Despite being surrounded by young teammates, Anderson led Park to a 17-7 record after averaging 22.4 points, 9.3 rebounds, 8.6 steals and 6.5 assists. She was named the county’s player of the year after Yarbrough received the honor in 1990 and ‘91.

“She just has a big ‘W’ on her chest that stands for ‘win,’ “ Jefferson coach Wendy Kohler said that season. “She’s going to be a great Division I player.”

Anderson turned out to be just that. She signed with Arizona, but transferred to Wisconsin after one season despite making the all-Pac-10 Freshman team. Despite only playing three seasons for the Badgers, she ranks 17th in scoring with 1,279 points. She was second-team All-Big Ten as a sophomore and junior and first team as a senior in 1997 after averaging 19.7 points, 4.5 assists and 3.5 rebounds. Anderson left Wisconsin as the school’s all-time leader in assists (471) and steals (327).

And then Anderson played professionally in the Women’s National Basketball Association with the Washington Mystics and then Charlotte Sting. She helped the Sting advance to the WNBA Finals in 2001 but they lost to the Los Angeles Sparks.

She also played professionally in Israel and Turkey and was inducted into the Racine County Sports Hall of Fame in 2012.

What a senior year at St. Catherine’s it was for Garchek. The Angels were 1-1 when two starters abruptly quit. When two reserves suffered knee injuries, the roster was down to seven players by Christmas. And then, while trying to hold together this team, Garchek sprained an ankle in February.

Somehow, the 6-0 guard-forward got the Angels to a WISAA Division 1 quarterfinal, where they lost 54-39 to 12-time defending champion Milwaukee Pius XI.

St. Catherine’s managed a 13-10 record and it all started with Garchek. Playing whatever position she was needed at for a particular game, she earned second-team AP All-State honors after averaging 18.1 points, 9.9 rebounds, 4.5 assists, 2.5 steals and 1.7 blocks.

“Most of the time, we would double-team her in the backcourt and, once she gave up the ball, we tried to deny her getting it again,” said Joel Classsen, who coached Pius to a 419-37 record and 14 state championships. “I thought we had limited success against her.”

Garchek went on to New Mexico, where she was a three-time first-team Western Athletic Conference player who scored a program-record 1,836 points. When Jaramillo was a senior in 1998, the Lobos earned their first NCAA Tournament berth.

After playing professionally in Finland, Greece and Portugal, Garchek tried out with the Los Angeles Sparks and Detroit Shock of the WNBA. And then she left behind basketball in 2001 and married Lee Jaramillo, a former baseball standout at Case.

“I’m not sure we had a better player in my 16 years,” said Don Flanagan, Garchek’s coach at New Mexico. “She developed a good ‘3,’ she could put it on the floor and she worked on her skills. Once she accepted what I wanted to do, she just went off.”

She was inducted into the Racine County Sports Hall of Fame in 2015.

As a freshman in 1995-96, Christensen played for Racine Lutheran, where here father has been the boys basketball coach since 1988. She earned second-team All-County honors, but she wanted to take her game to a higher level.

A mile or so to the south of Lutheran, Park had an outstanding program going with center LaTonya Sims, who would become one of the most highly-recruited high school players in the nation. Christensen made the decision to join Park’s program for her sophomore season and it paid immediate dividends.

During her first season at Park, she was the floor leader when the Panthers won the 1997 WIAA Division 1 championship with a 59-31 victory over Milwaukee Washington. And she continued to improve during the next two seasons.

As a senior, she earned second-team AP All-State honors and was named the county’s player of the year after averaging 15.9 points (which led the county), 5.7 rebounds, 4.3 steals and 3.8 assists. In her three seasons at Park, the Panthers went 68-6.

After signing with Division I Wright State University in Dayton, Ohio, Christensen played there for two seasons before transferring to Wisconsin Lutheran,a Division III program in Milwaukee. She led the Warriors to the Lake Michigan Conference championship as a senior and to just the second Division III national tournament berth in the program’s history.

“She had raised the level of play on this team by her hard work day in and day out,” Wisconsin Lutheran coach Wayne Smith said that season.

Center LaTonya Sims led Park to the 1997 WIAA Division 1 championship. She has been selected by Journal Times sportswriter Peter Jackel as the best girls basketball player from Racine County during the 1990s. 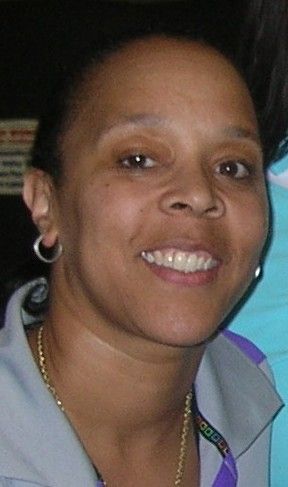 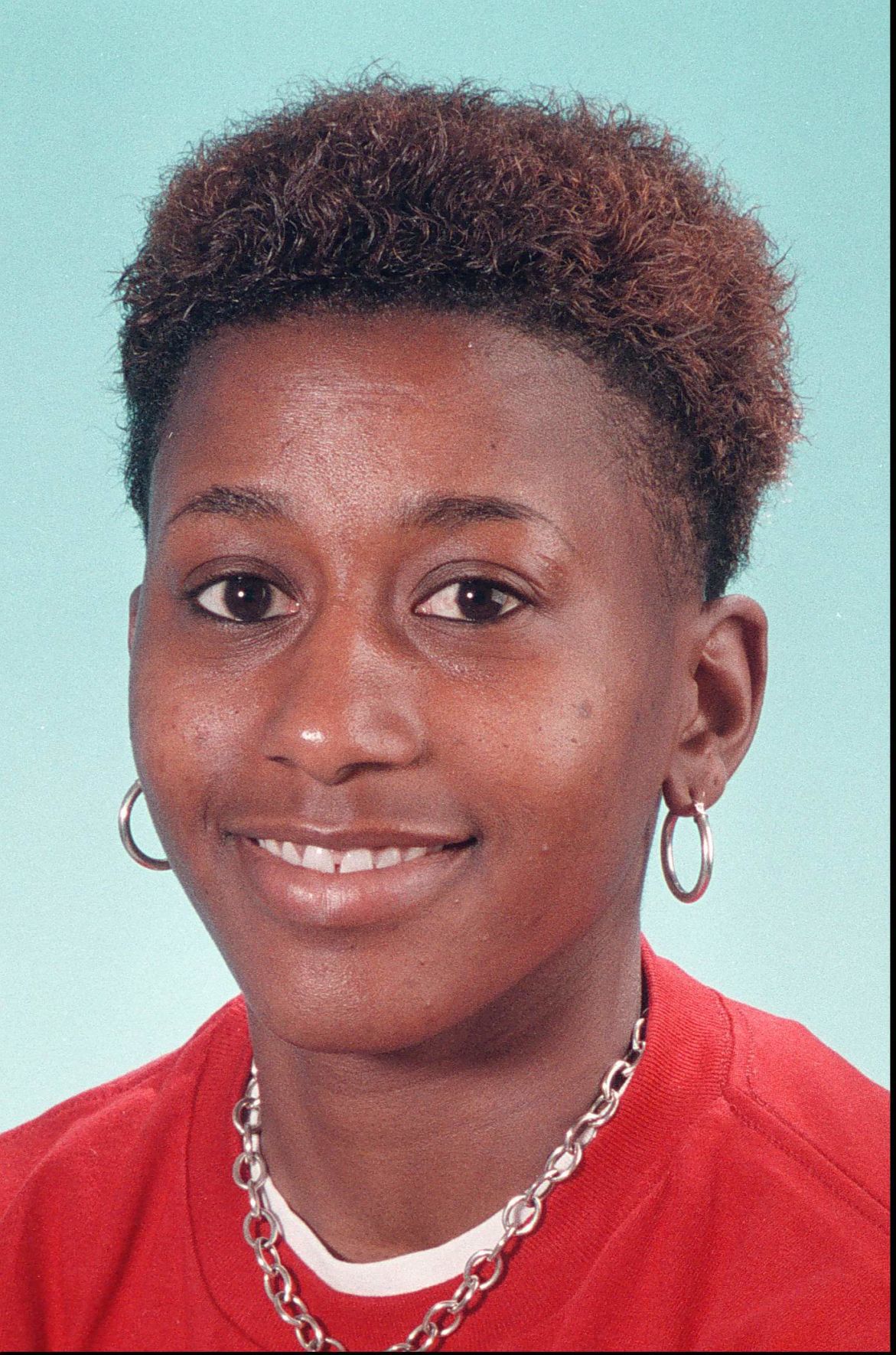 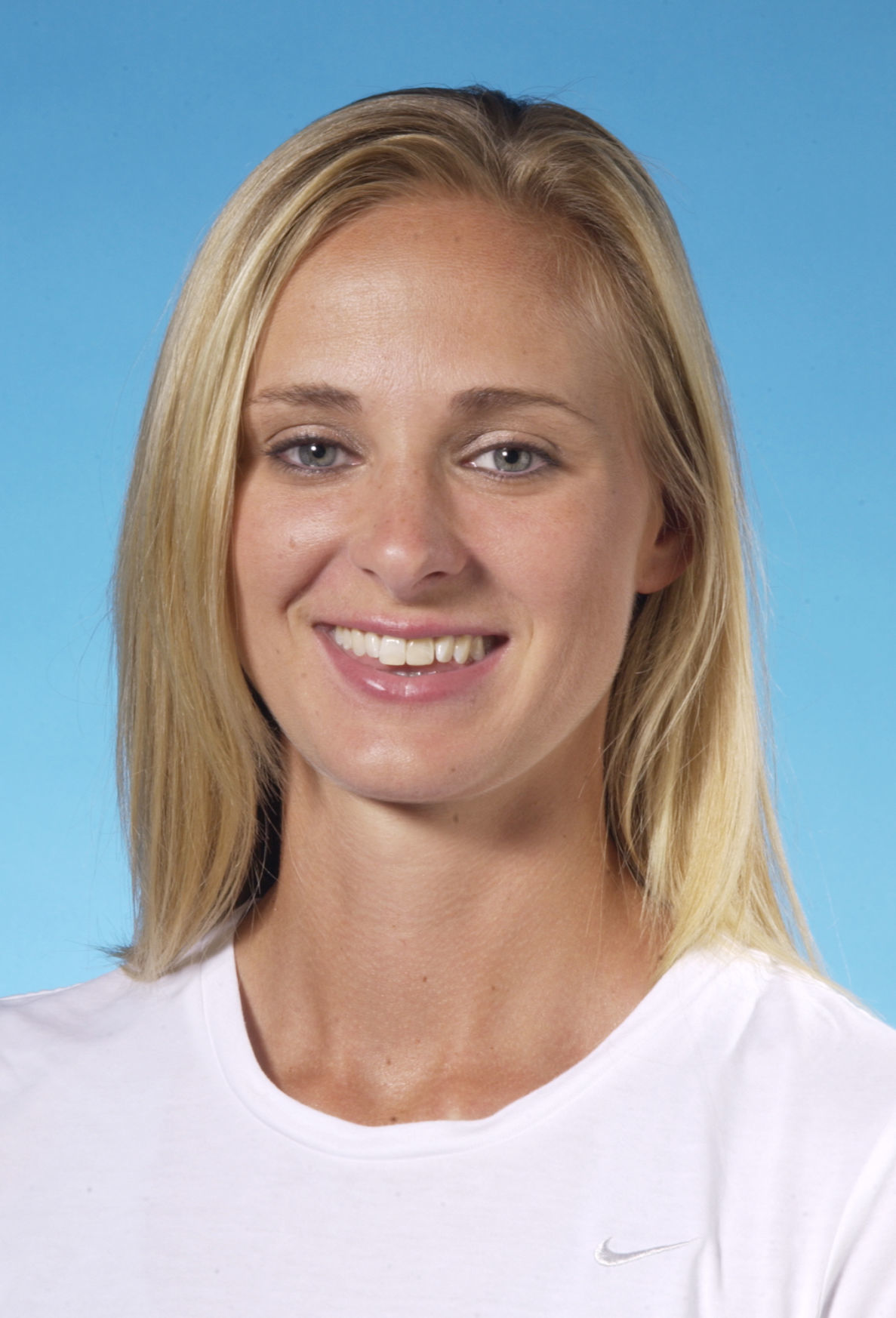