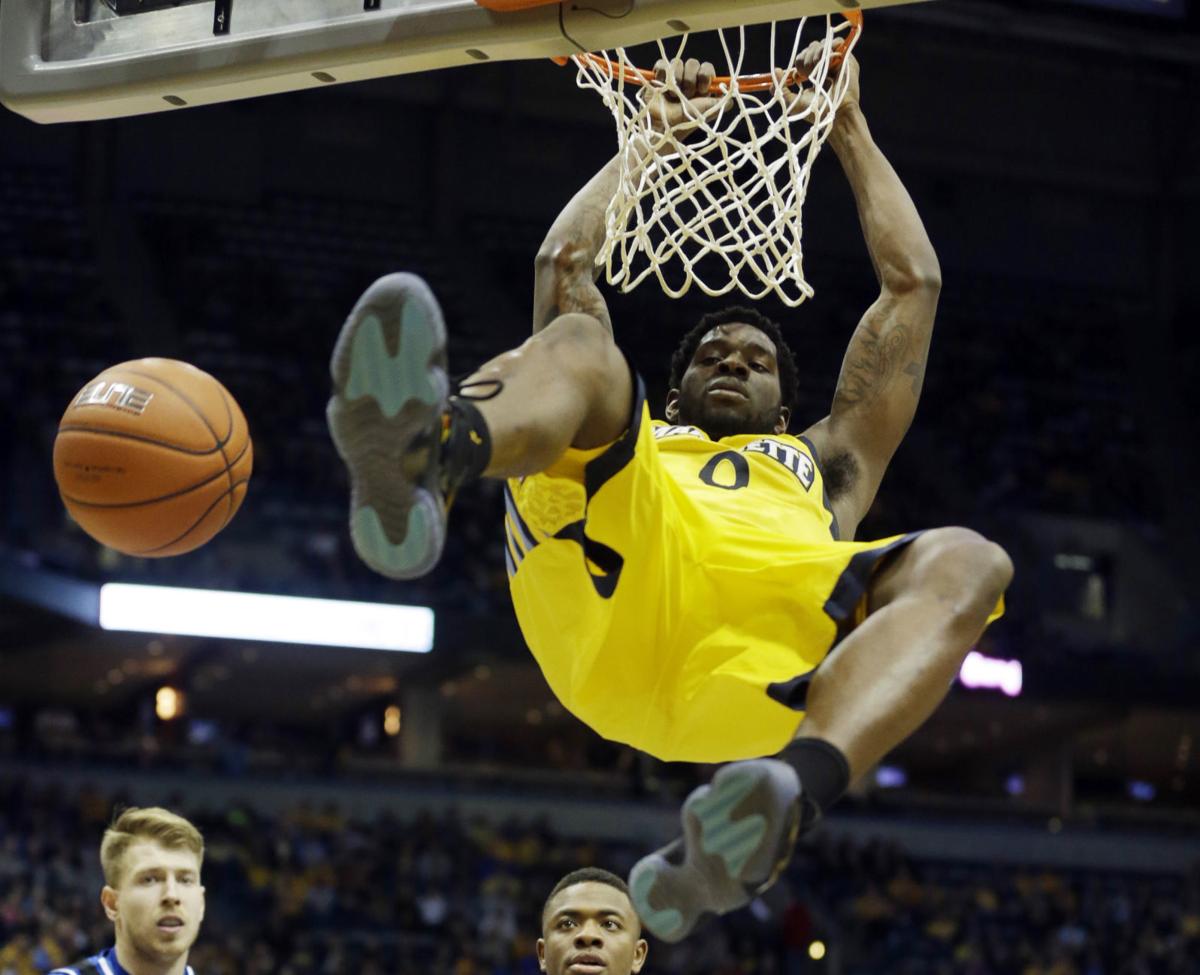 Jamil Wilson dunks for Marquette during a game against Seton Hall Jan. 11, 2014 in Milwaukee. Wilson has been selected by Journal Times sportswriter Peter Jackel as the best boys basketball player in Racine County during the 2000s. 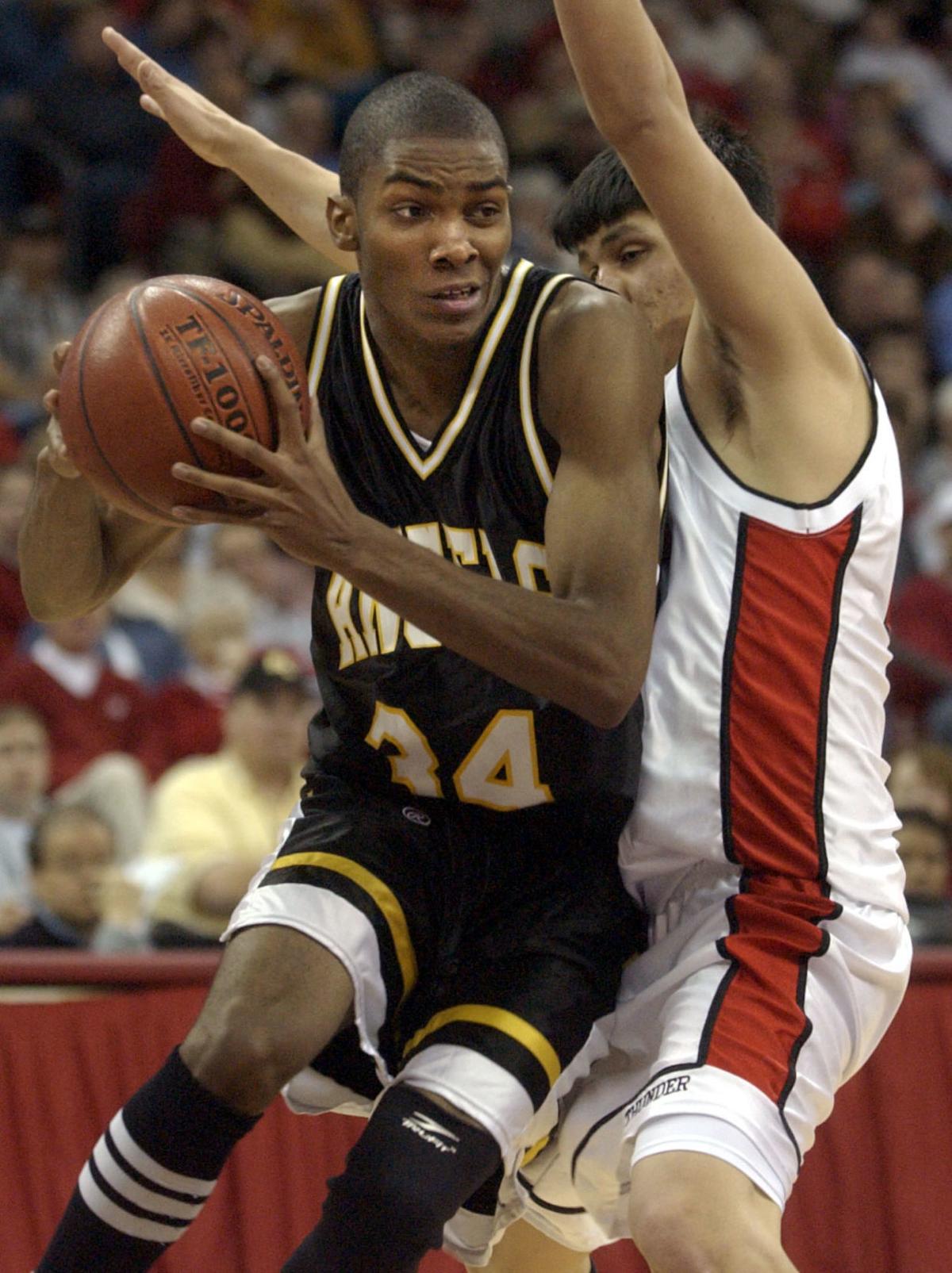 St. Catherine's Cordero Barkley passes in the post in the 2005 WIAA Division 2 state championship game at the Kohl Center in Madison. The Angels defeated Seymour 52-50 on a defensive stand in the final seconds following two dramatic free-throw makes by teammate Devron Bostick.

The 2000s belonged to St. Catherine’s, from a high school boys basketball perspective in Racine County.

Behind All-State guard Sharif Chambliss, the Angels opened the decade by taking a 23-0 record into the final Wisconsin Independent Schools Athletic Association state tournament before losing to Milwaukee Pius XI. Later in 2000, the private and public schools merged into one association.

And starting in 2005, St. Catherine’s started a run during which it won five state championships in six seasons, a feat that is unmatched in county high school basketball history. Five members of the program — Chambliss, LaVontay Fenderson, Cordero Barkley, Devron Bostick and James Haarsma — were named the All-Racine County Player of the Year during the decade.

But in my opinion, the Angels did not have the single most dominant player in the county during the 2000s. That distinction goes to Horlick forward Jamil Wilson.

Player of the Decade: Jamil Wilson, Horlick, 2009Wilson is the most recent county boys player to earn first-team Associated Press All-State honors in back-to-back seasons. Robert Berryhill, a 1986 Horlick graduate, is the only other county boy to achieve that feat in the last 50 years.

The 6-foot-7 forward was a unanimous choice as a senior in 2009 after leading the Rebels to a 24-2 record and just the program’s second appearance in the WIAA Division 1 state championship game (a 56-41 loss to Madison Memorial).

He signed with Oregon, but transferred to Marquette after one season. Wilson started 53 of 101 games in three seasons for the Golden Eagles and averaged

Wilson, a Milwaukee native who turns 30 in November, appeared in 15 games with 10 starts for the Los Angeles Clippers during the 2017-18 season, averaging 7.0 points and 2.1 rebounds per game. He played this season for Unics Kazan of the VTB United League and EuroCup in Kazan, Russia.

“Jamil is one of the most gifted and versatile athletes to come out of Racine,” Horlick coach Jason Treutelaar said in 2009. “He played all five positions on the floor throughout his career and did it successfully.”

The son of former Park standout Jameel Ghuari, Chambliss played at his father’s high school alma mater through his sophomore year. He was teammates at Park with future NBA All-Star Caron Butler.

And then he transferred to St. Catherine’s in 1998, where he would truly demonstrate just how exceptional of an athlete he was. He started at quarterback on the Angels’ football team as a junior in 1998 (Chambliss opted not to play football as a senior).

But Chambliss’ forte was basketball. He played shooting guard as a junior and averaged 19.1 points, 4.5 rebounds, 2.7 assists and 2.2 steals on the 16-6 Angels.

Chambliss was the Angels’ only returning starter as a senior and St. Catherine’s coach Bob Letsch capitalized on his leadership and playmaking skills by moving him to point guard. The result? Chambliss led his new teammates to a 23-0 record before they lost to Pius 68-51 in the historic final private schools state championship game.

Chambliss certainly did his part on that afternoon of March 11, 2000, scoring a game-high 33 points.

But as fine of a player that Chambliss was, he might be an even finer person. His player of the year story in 2000 included how he attended the memorial service in February 1999 of Wilmot basketball player Mark Barranco, who had collapsed and died on the court. Chambliss went to the trouble of driving to Wilmot even though he did not personally know Barranco.

“He’s that kind of person,” said legendary St. Catherine’s coach John McGuire, who served as Letsch’s assistant coach during the 1999-2000 season, a year before he died. “He’s just top shelf. Just a top-notcher.”

Chambliss is now an assistant coach for Wright State in Dayton, Ohio.

St. Catherine’s dynasty in the 2000s started with the 6-5 Barkley serving as the focal point on the ‘05 team. He earned second-team AP All-State honors that year and was the county’s player of the year, but there was a twist with Barkley: He only averaged 11.3 points per game as a senior.

So respected was Barkley as a leader, defensive specialist and a presence on the floor that he earned those honors despite not having gaudy statistics. As Barkley said in 2005, “I could shoot any time I wanted to, but that’s not what it was going to take to win. I saw that.”

Instead, Barkley willingly deferred to teammates the likes of Devron Bostick and Reggie Bunch while routinely making life miserable for top scorers on other teams. He also averaged 6.8 rebounds and 3.3 assists in leading St. Catherine’s to a 25-1 record and a 52-50 victory over Seymour in the Division 2 championship game.

Barkley gave a typical performance in that game with 12 points, 11 rebounds, three assists, two steals and a block.

He went on bring his intangibles for four seasons to UW-Green Bay’s program and is now involved in banking and broadcasting in Green Bay.

It was Jan. 24, 2006 when St. Catherine’s traveled to Waterford for a Lakeshore Conference showdown against the strong Wolverines. And then 6-5 senior forward Devron Bostick took matters into his own hands.

Bostick went 13 for 19 from the floor, had five dunks and finished with 29 points, seven rebounds, four assists, three blocks and a steal in St. Catherine’s 68-61 victory. Just what did Waterford coach Mickey Mala think of Bostick that night?

“He flat out won that game in my opinion,” Mala said in 2006. “He hit just incredible shot after incredible shot. We were running double teams at him and he would spin away and drop 15- and 16-foot jump shots down. After that game, I went up to Devron and I believe I used the word, ‘Man-child.’ “

That sums it up pretty well. After transferring from Park prior to his junior year, all Bostick did was lead St. Catherine’s to a 52-1 record, a 44-game winning streak and two state championship.

As a senior, he earned first-team AP All-State honors and became St. Catherine’s third straight player of the year in the county. He averaged 17.2 points, 6.4 rebounds, 1.9 assists, 1.5 steals and 1.4 blocks that season.

I struggled mightily with this last first-team selection before settling on Christensen.

Here is what I had to consider before making that choice: Fenderson was the county’s player of the year in 2004 and went on to become a first-team Division II All-American at UW-Parkside in 2009 after leading the nation in scoring. But St. Catherine’s was so loaded with talent in the 2000s that other exceptional talent in the program falls through the cracks, like Matt Lojeski, Reggie Bunch and Jeremy Manchester.

I also considered Case’s Bryan Bedford, a starter on Case’s 1999 state championship team who went on to play for Kent State. And also Haarsma, who was named the county’s player of the year as a senior in 2007 after leading St. Catherine’s to a third straight state championship.

I finally settled on Christensen, and this is not a cop out. He is Lutheran’s all-time leading scorer and started as a freshman on the program’s most recent state championship team in 1998. He also earned fourth-team AP All-State honors as a junior in 2000.

Were there more talented players in the county than this son of longtime Lutheran coach Jeff Christensen during the 2000s? Certainly. But there were likely none who were smarter than Kevin Christensen.

As a senior, he averaged 23.4 points, 6.5 rebounds, 3.9 assists and 2.8 steals in leading Lutheran to a 19-4 record. But his most remarkable statistic might have been his average of just 1.3 turnovers a game despite having the ball in his hands most of the time.

“Kevin Christensen, to me, epitomized the intelligent player on the court,” said the late Norb Wishowski, who led Catholic Central to the Division 4 state championship in 2001, the first season following the WIAA-WISAA merger. “He knew how to play the game with the ball, he knew how to play the game without the ball and he moved so well. He was deceiving on the court that when you were guarding him, you always had to worry. When he slowed down, look out, because he was going to turn it on.

“I admired him for the last three years where I said, ‘Man, this kid just knows how to play the game.’ You could tell he was the son of a coach because that’s usually who does that stuff.”

Christensen has been a longtime assistant for his father at Lutheran.

Jamil Wilson dunks for Marquette during a game against Seton Hall Jan. 11, 2014 in Milwaukee. Wilson has been selected by Journal Times sportswriter Peter Jackel as the best boys basketball player in Racine County during the 2000s.

St. Catherine's Cordero Barkley passes in the post in the 2005 WIAA Division 2 state championship game at the Kohl Center in Madison. The Angels defeated Seymour 52-50 on a defensive stand in the final seconds following two dramatic free-throw makes by teammate Devron Bostick. 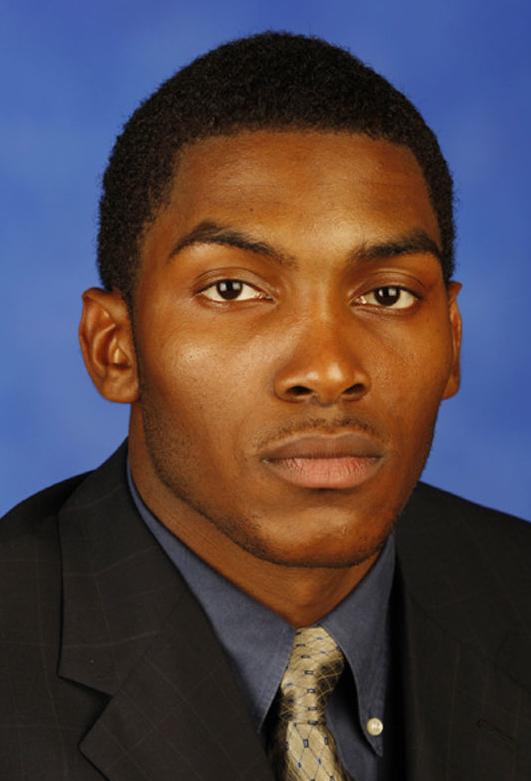 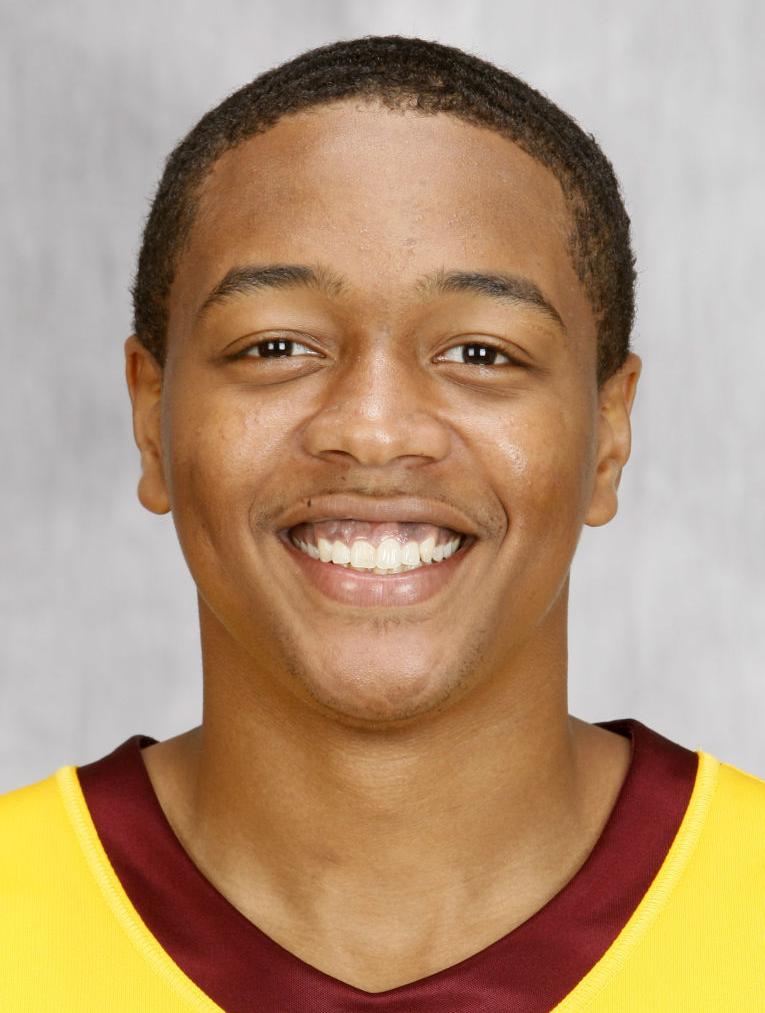 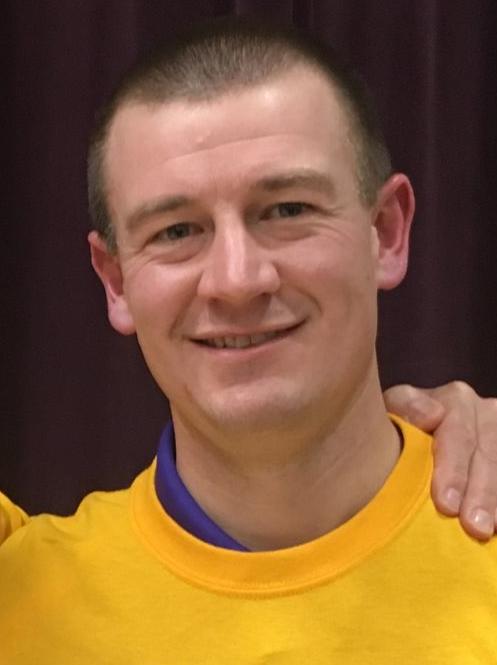