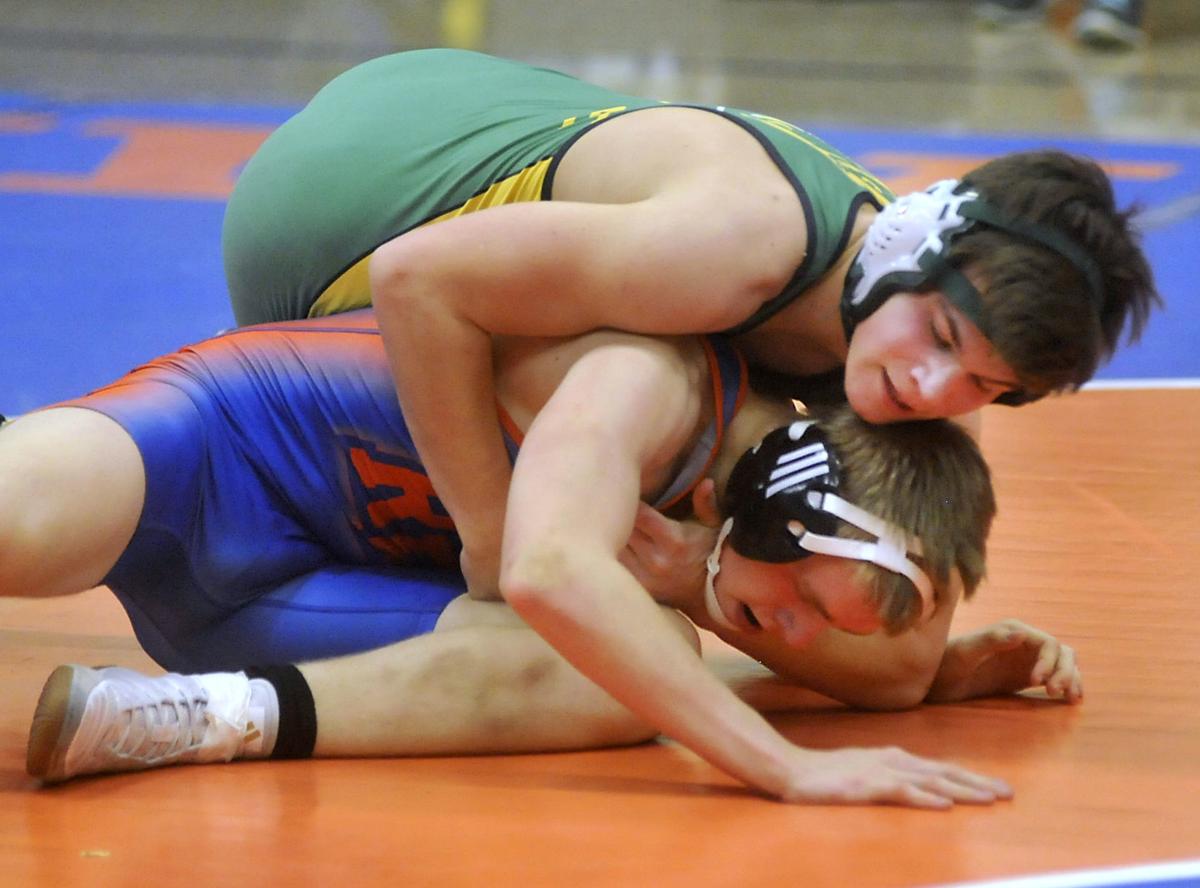 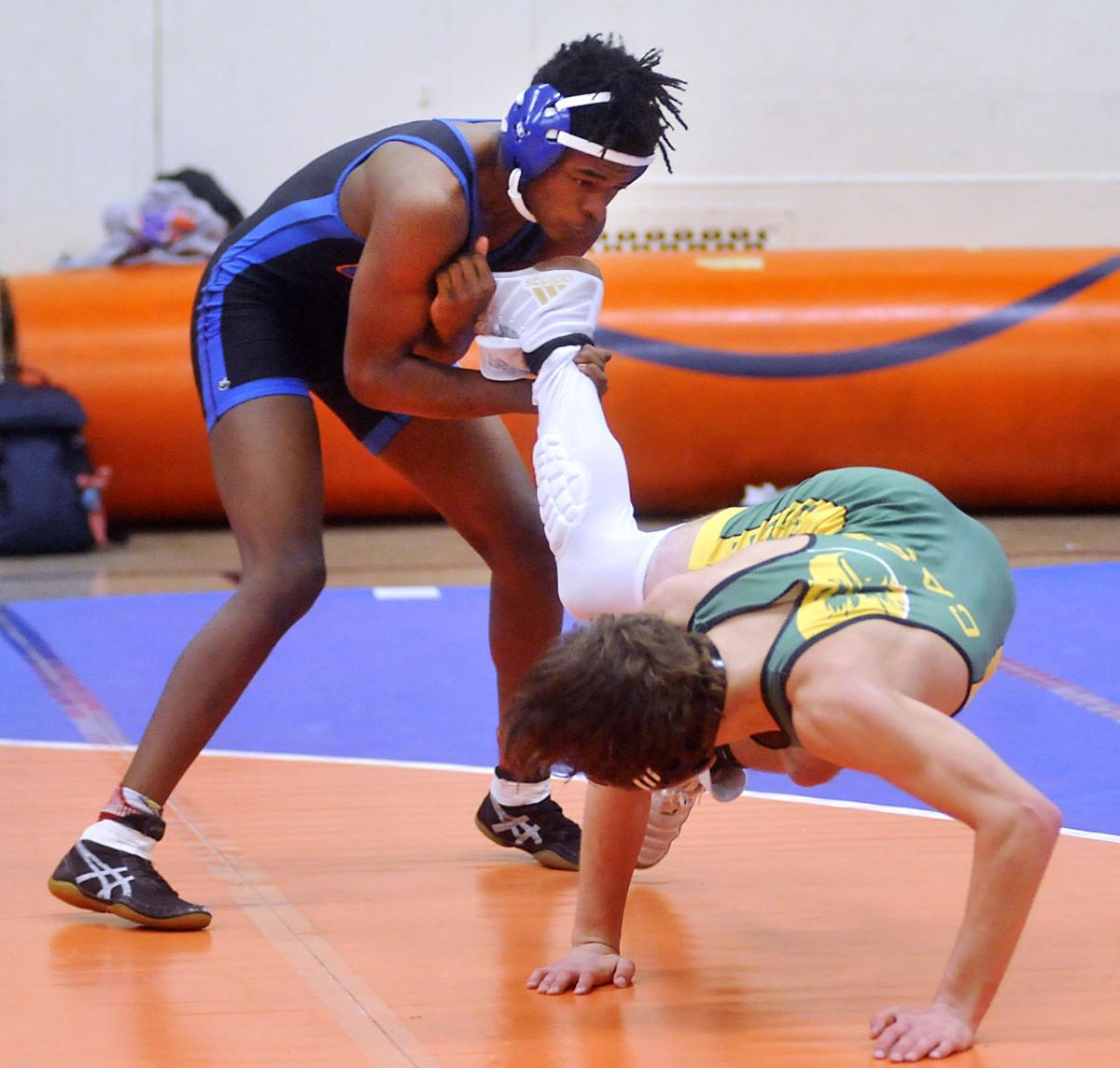 Park's Dartrell Joshua tries to take down Case's Lucas Jackson in the 145-pound match during a Southeast Conference wrestling meet Thursday at Park High School. The Panthers won the meet 57-12.

The Crusaders took their show to Kenosha and remained unbeaten, winning 89-73 over St. Joseph in a Metro Classic Conference game.

Strande finished with 43 points for Lutheran (14-0, 8-0 MCC) as she works her way toward being the all-time leading scorer in Racine County history and one of the top scorers of all time in Wisconsin.

Strande, a University of Minnesota recruit, got a majority of her points as the Crusaders broke St. Joseph’s press.

“She took advantage of their aggressive press to get layups in transition,” Lutheran coach Steve Shaffer said.

The Lancers’ aggressiveness cost them as they were whistled for 26 fouls and sent the Crusaders to the line for 36 free throws (making 28). Lutheran was called for just eight fouls and St. Joseph went 3 of 6 at the line.

Strande made 14 of 16 free throws as she fell just two points short of her career high.

Morgann Gardner had another strong game as well with 23 points (9 of 11 at the line) and Nevaiah Bell-Tenner added eight points.

St. Joseph had three players score in double figures — Mikayla Blanc-Washington had 16 points, Katie Matrise had 14 and Deja Rivers had 12.

ST. CATHERINE’S 75, ST. FRANCIS 32: The Angels had everything working offensively and defensively Thursday for a convincing nonconference victory at St. Catherine’s.

The 75 points was St. Catherine’s best offensive output of the season, despite missing two of its best players because of injury, and the 32 points the Mariners scored were the fewest the Angels (2-10) had given up.

To say the least. The Angels took a 48-13 halftime lead thanks to Jaidah Blunt (14 points) and Sophie Wentorf (16), who combined for 30 points in the first half.

Blunt, a junior, finished with a season-best 22 points. Blunt entered the game averaging 7.4 points per game. Wentorf, a senior, had 18 points, coming in with a scoring average of 11.8.

The Angels were without freshman Kennedee Clark, who injured her wrist in gym class two weeks ago, Kate Cafferty, who had a concussion, Tarkowski said.

PARK 58, CASE 12: The Panthers went on a pinning spree in the upper weights to secure a Southeast Conference dual meet victory over the Eagles at Park.

Meier is just 2-1, Case coach Dave Edwards said, but both victories have come on pins.

“Jaramillo filled in quite nicely,” Park coach Jon Burdick said. “He stayed in good position and he was relentless on the kid.”

Dasani Driver pinned Jesse Bailey-Prescott in 3:22 at 106 pounds before Park won the last four matches, three on pins. The fastest pin of the night was by senior Joseph Mendoza (27-1), who beat Nickolas Alanis in 1:07 at 132.

“It was a good meet for the crowd to watch,” Edwards said.

The meet was the last home meet for Joshua, Nielsen, Ford, Campbell and Mendoza.

FRANKLIN 66, HORLICK 18: The shorthanded Rebels battled well, coach Jerry Kupper said, but too many forfeits resulted in a Southeast Conference loss at Franklin.

“We wrestled well, but we just don’t have enough kids,” Kupper said.

Thomas Cook got things started for Union Grove (8-3, 5-1 SLC) at 126 pounds with an 11-4 decision over Jacob Greidanus. Broncos coach Andy Weis said that Cook wrestled a really smart and aggressive match in order to get the victory.

Four matches later, Jon Sackman started a seven-match winning streak that closed out the meet. Four of the final five matches were won with pins of less than one minute.

Connor Esch (285) had the quickest pin for either team to end the night, beating Diego Nova in 31 seconds.

Ty Kiesler got the night started for Burlington at 113 pounds with a 6-2 decision over Junior Urioste.

Later on, Nathaniel Cortez (132) won the first of four straight matches for the Demons with a 3-0 decision over Douglas Woyak. Burlington would go on to start another four match win streak when Jake Skrundz (170) won by technical fall over Aaron Taylor 17-2 in 4:29.

Qwade Gehring (182) had the quickest pin of the meet for Burlington, pinning Reid Ruth in 2:36. 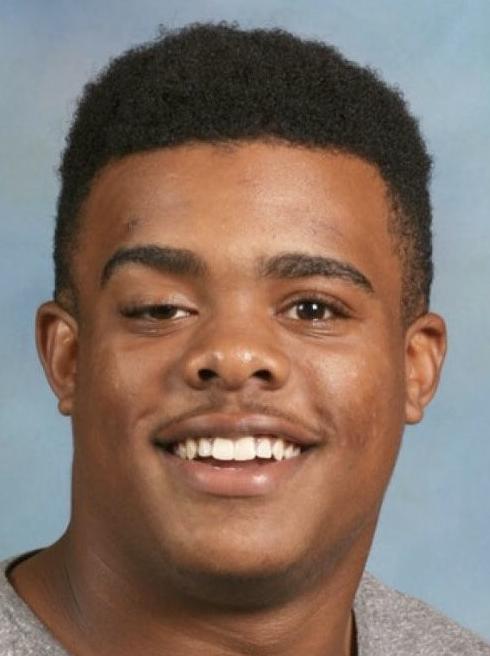 Park's Dartrell Joshua tries to take down Case's Lucas Jackson in the 145-pound match during a Southeast Conference wrestling meet Thursday at Park High School. The Panthers won the meet 57-12. 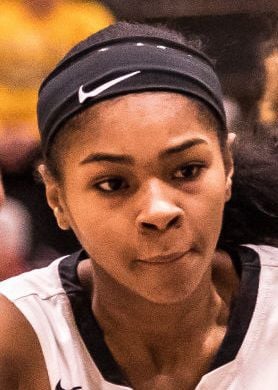 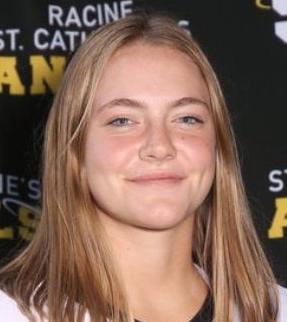 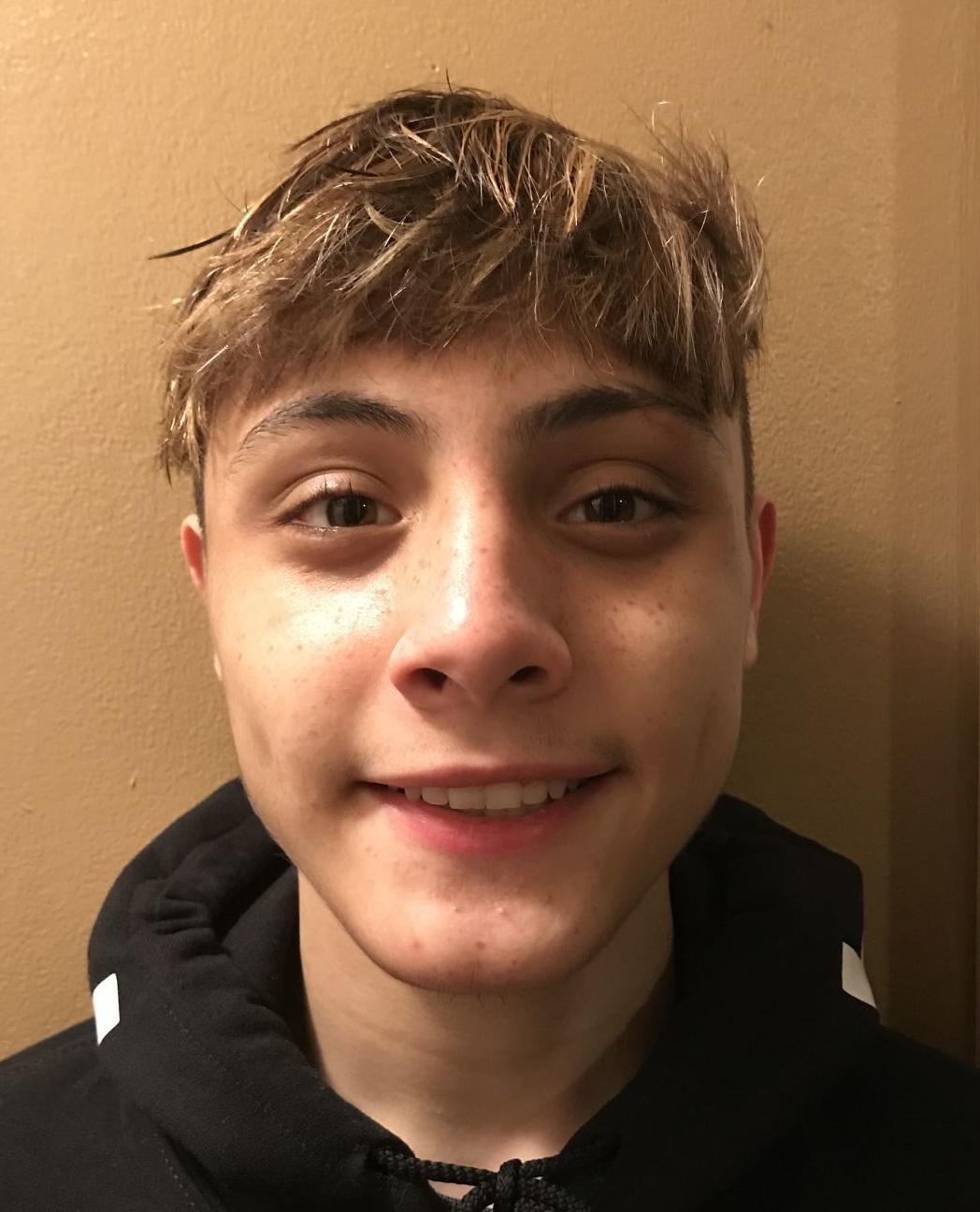 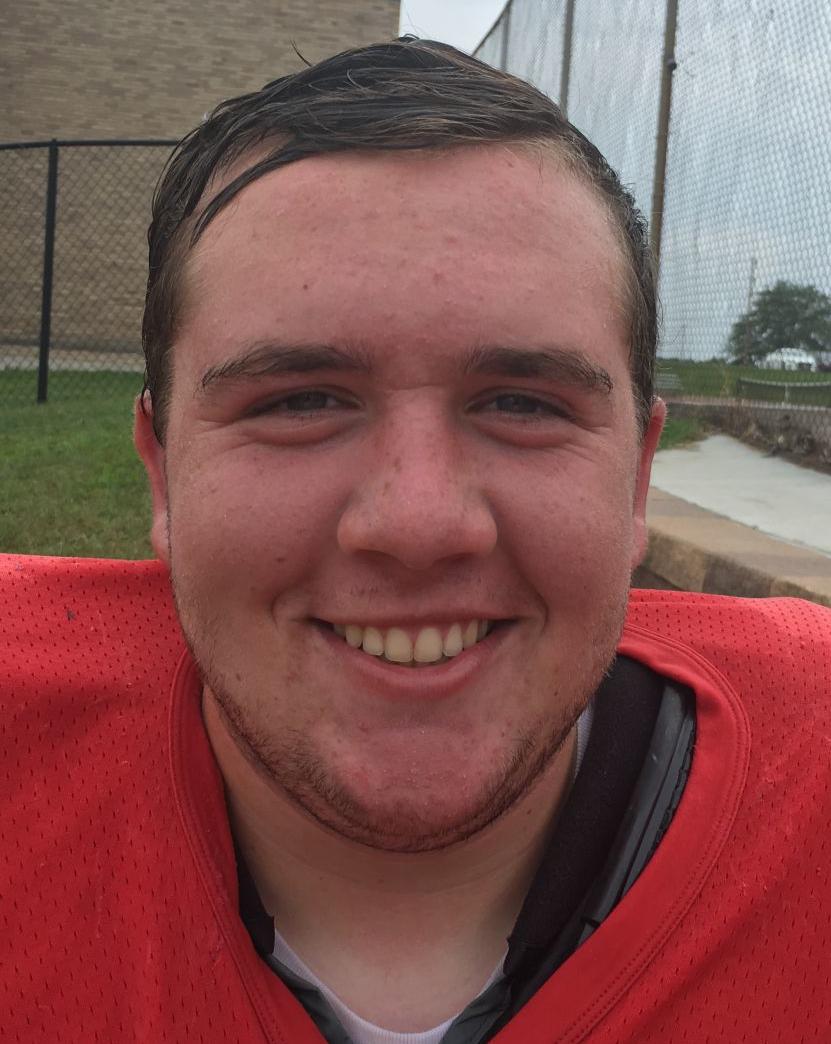 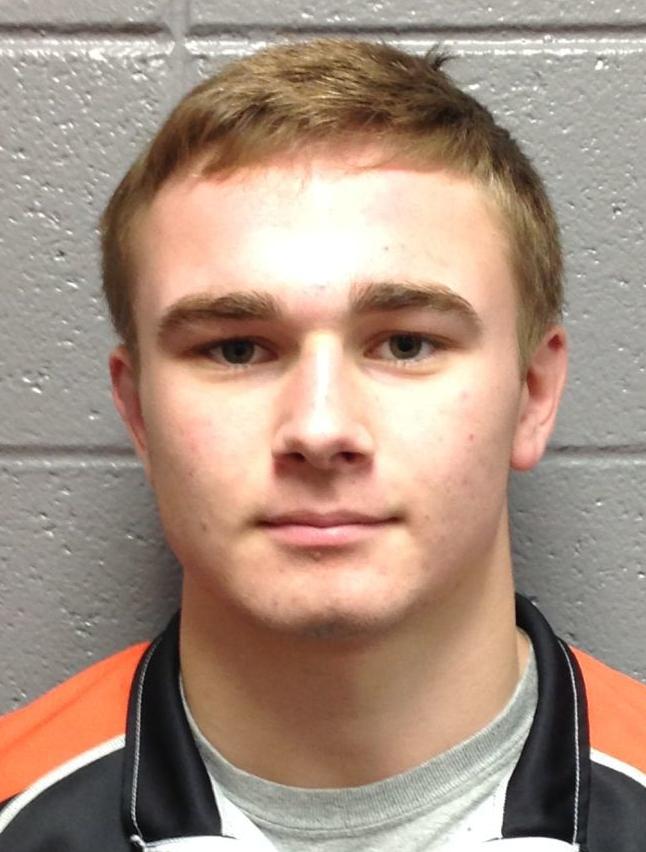