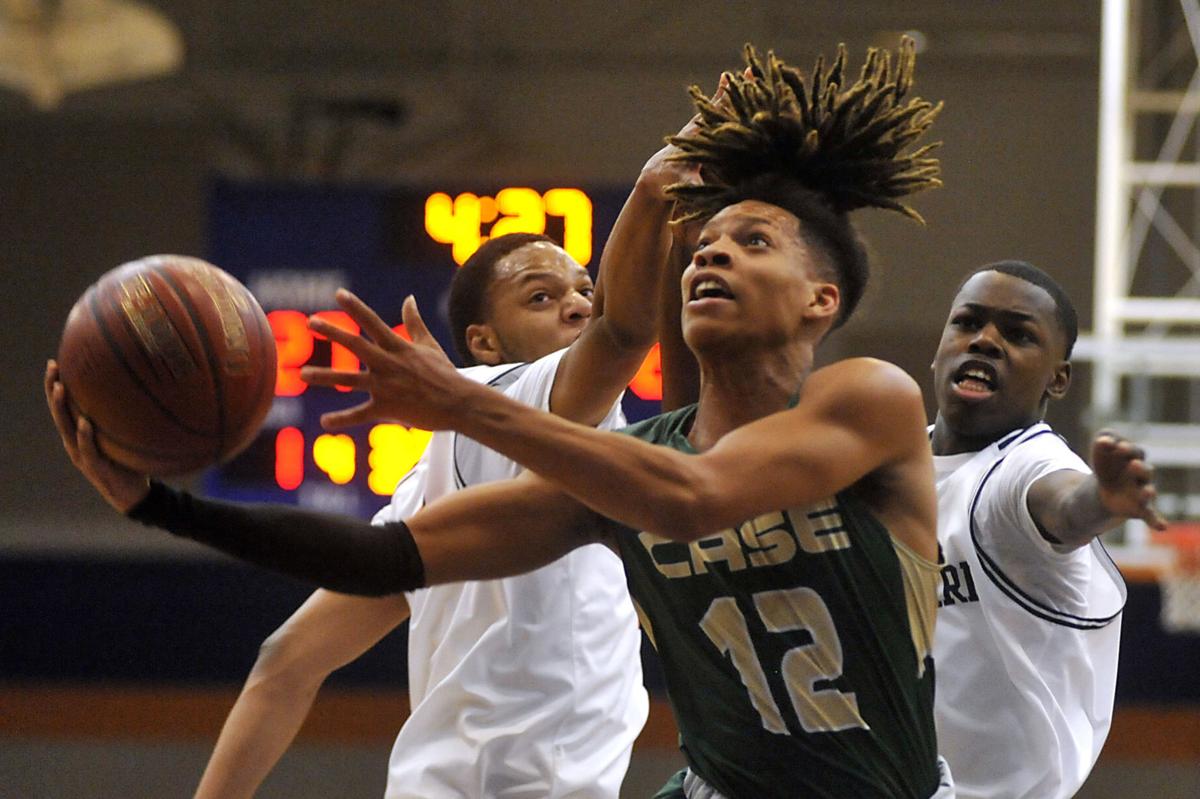 Case's Mylin Duffie drives to the basket between Park's Nobal Days, left, and Terry Gamble, right, during a Southeast Conference game Friday night in Park's fieldhouse. After getting cut from the team as a junior because of poor grades, Duffie has been a valuable defensive presence off the bench for the Eagles. 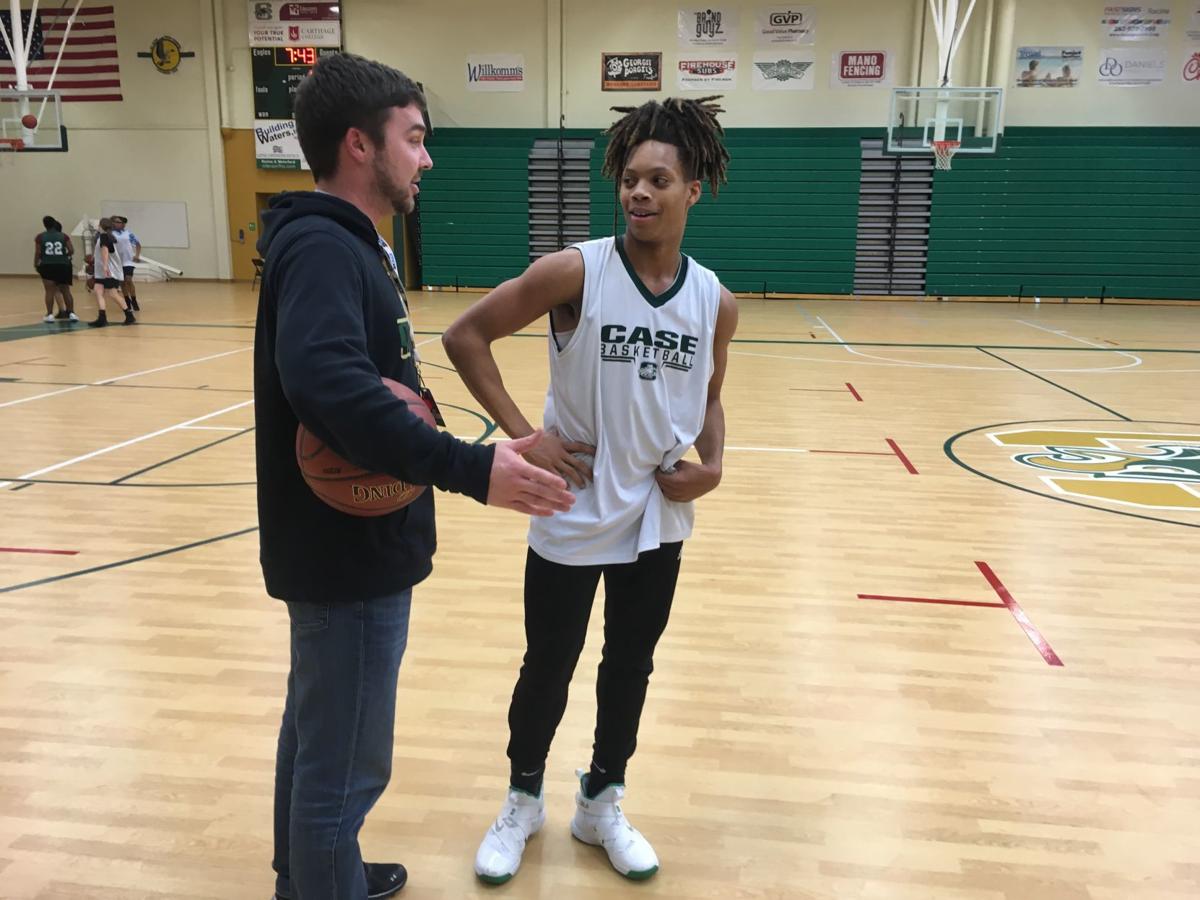 Case coach Jake Berce instructs senior guard Mylin Duffie during a practice on Jan. 24 in Case's fieldhouse. Berce has been one of the mentors who has helped Duffie develop into a productive student-athlete after Duffie experienced a horrific incident in 2011.

MOUNT PLEASANT — After a year away from basketball and a far longer stretch away from life, Mylin Duffie’s symbolic comeback arrived Dec. 7.

The Case High School boys basketball team was getting whipped by defending Southeast Conference champion Franklin and coach Jake Berce felt he had to find some kind of a spark. Why not give the kid on the bench with the determined look in his eyes a chance to get something done?

Duffie came in and almost immediately converted a three-point play on a reverse layup after a fast break. He followed with a pair of 3-pointers to get Case right back in the game.

“He saw we were in a bad situation, so he just stepped up to be a leader,” Case senior forward Cody Sardin said.

And what a comeback it has been for Duffie, who endured something so horrific as a 9-year-old boy during the late spring of 2011 that he declines to mention it to this day. He has never even discussed it with his mother, who speaks willingly of what happened, yet still struggles to recall the details because of the injuries she sustained.

What matters now is Duffie has checked back into life in such a big way. He returned to the football and basketball teams. His grades have recovered. He’s happy again. And he has earned a partial scholarship to play football for Minnesota West Community and Technical College in Worthington, Minn.

Call it a miracle because that’s what Duffie’s story is.

“Working in education as I have, and I’ve worked in a lot or urban settings, he’s one of the biggest success stories I’ve ever seen where a kid was experiencing adversity and he turned his life around,” Case athletic director Adam King said. “He’s a young man who really needs to be proud of himself.

“His family is proud of him and everybody here at Case is proud of him for how he turned it around. He goes through hallways and shakes teachers’ hands, he talks to any kid in the hallway and he picks kids up.

“He’s never used what he experienced as an excuse.”

What exactly did Duffie experience on June 7, 2011 — one week before his 10th birthday — in a Piggly Wiggly parking lot on Durand Avenue? How can he be expected to answer such a question after he’s been trying so hard to block it out of his mind for nearly eight years?

What happened is that Mylin and his older brother, Marlontae, were accompanying their parents, Marlon and Delicia, during a round of errands that Tuesday when routine suddenly spun out of control into sheer horror. According to the criminal complaint, it started when Marlon wanted his wife to take the kids to the Dollar Store, but she wanted to buy groceries.

Marlon, who would later concede in court that, “I chose to drink,” dragged his wife out of their car and onto the asphalt parking lot in broad daylight, beat on her and stomped on her head and face. So vicious was the assault that Marlontae and Mylon both ended up with their mother’s blood on them while trying to protect her. A tennis shoe imprint was left on Delicia’s face and forehead.

Delicia suffered facial and skull fractures among other injuries and was later placed in a medically-induced coma. To this day, she is sketchy when recalling the details and is overcome with emotion when she tries.

“I don’t know what happened,” said Delicia, who is on Social Security Disability Insurance. “I have no idea.”

What she does know if there was an enormous price to pay. Her now former husband is serving a 16½-year sentence at the Stanley Correctional Center in Wisconsin for a crime that moved Racine County Circuit Court Judge Wayne Marik to say, “I can’t imagine how these actions could have been any more aggravated and egregious, unless you killed her.”

As for Delicia and her two sons, their healing process continues — just as it may for the rest of their lives.

The same questions could have been asked of Mylin as he struggled for years to recover from this ordeal circumstances forced him to experience.

It was almost as if Duffie was walking on a tight rope with no safety net as he tried to navigate these last eight years. He was never a bad kid. But he was confused and traumatized and he made plenty of bad decisions.

“I used to hang out with the wrong crowd, sit in the hallways and talk to my guys and go out for lunch and be late coming back,” Duffie said. “Or sometimes I wouldn’t come back.”

Duffie’s grades suffered. Despite being a gifted athlete, he walked away from the school’s football program. He was cut from the basketball program as a junior because of poor grades. And for most of his high school career, he had no idea who was the motivated student-athlete he would eventually come.

But, all along, a dynamic support group was within the school Duffie often shunned. There was Wally Booker, the old-school taskmaster coach of the Case girls basketball program who is the uncle of Duffie’s mother. There was football coach Bryan Shredl, who convinced him to play football as a senior. There was Berce, who has been a strong mentor for a kid who is rapidly growing into a man.

It was just a matter of Duffie tuning into their message.

“I just think he didn’t have much direction,” Shredl said. “We tried to provide that for him, but he kept losing his way. Last year, when he got cut from the basketball team because of grades, I think he realized he wasn’t going down the path he wanted to go down.

“We got him out for football and the rest is history. He had a wonderful senior year as far as athletics, but, academically, during football season he was getting straight A’s.”

That was no coincidence.

“Last summer, I really dedicated myself to getting good grades and getting to class on time,” Duffie said. “That’s where it all started. And then the rest just fell into place.”

Sardin has experienced this transformation, saying, “His personality hasn’t really changed, but his demeanor has. His work ethic is getting higher and higher. He didn’t play last year, so I’m pretty sure he’s happy to be back on the team and producing.”

Indeed, he is. Next year, it will be onto Minnesota West, where Duffie plans to play football as a defensive back and pursue a career in athletic training. He has found himself after all these years and Duffie plans to never again let that guy get away again.

When asked what his scholarship means to him, Duffie said, “It gives me a new stage in life, a fresh start, a new beginning. I’m going to stay dedicated to what I want to do.”

Berce likes his chances to succeed.

“He’s a positive young man in general,” Berce said. “He’s constantly smiling. He’s emotional, but at the same time, he has lately been feeding that emotion into very positive things.

“He just means a lot to our whole program and our school with his turnaround story.”

Peter Jackel, a sportswriter for The Journal Times since 1979, took first place in the Associated Press Sports Editors national contest.

Case's Mylin Duffie drives to the basket between Park's Nobal Days, left, and Terry Gamble, right, during a Southeast Conference game Friday night in Park's fieldhouse. After getting cut from the team as a junior because of poor grades, Duffie has been a valuable defensive presence off the bench for the Eagles.

Case coach Jake Berce instructs senior guard Mylin Duffie during a practice on Jan. 24 in Case's fieldhouse. Berce has been one of the mentors who has helped Duffie develop into a productive student-athlete after Duffie experienced a horrific incident in 2011. 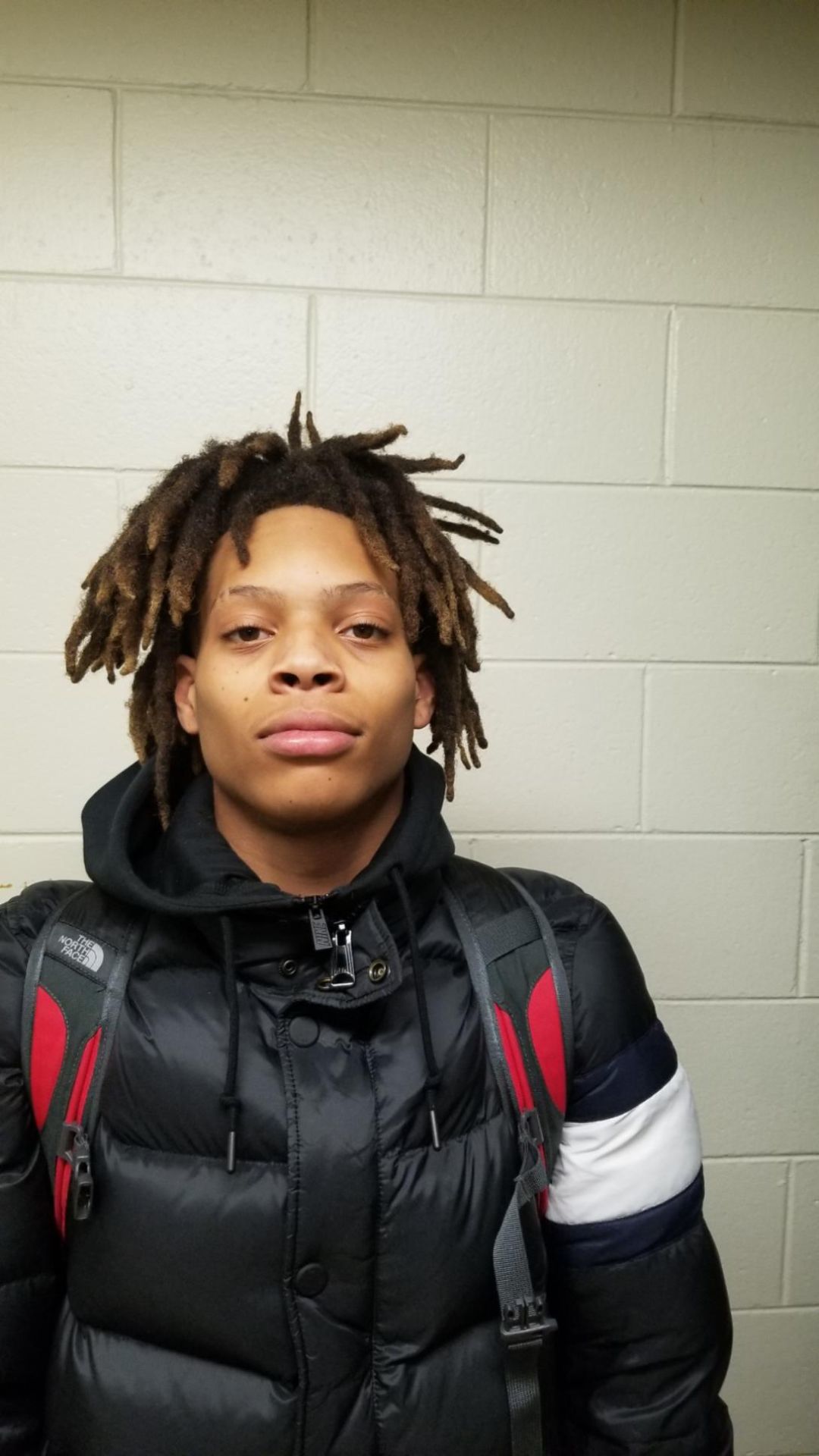 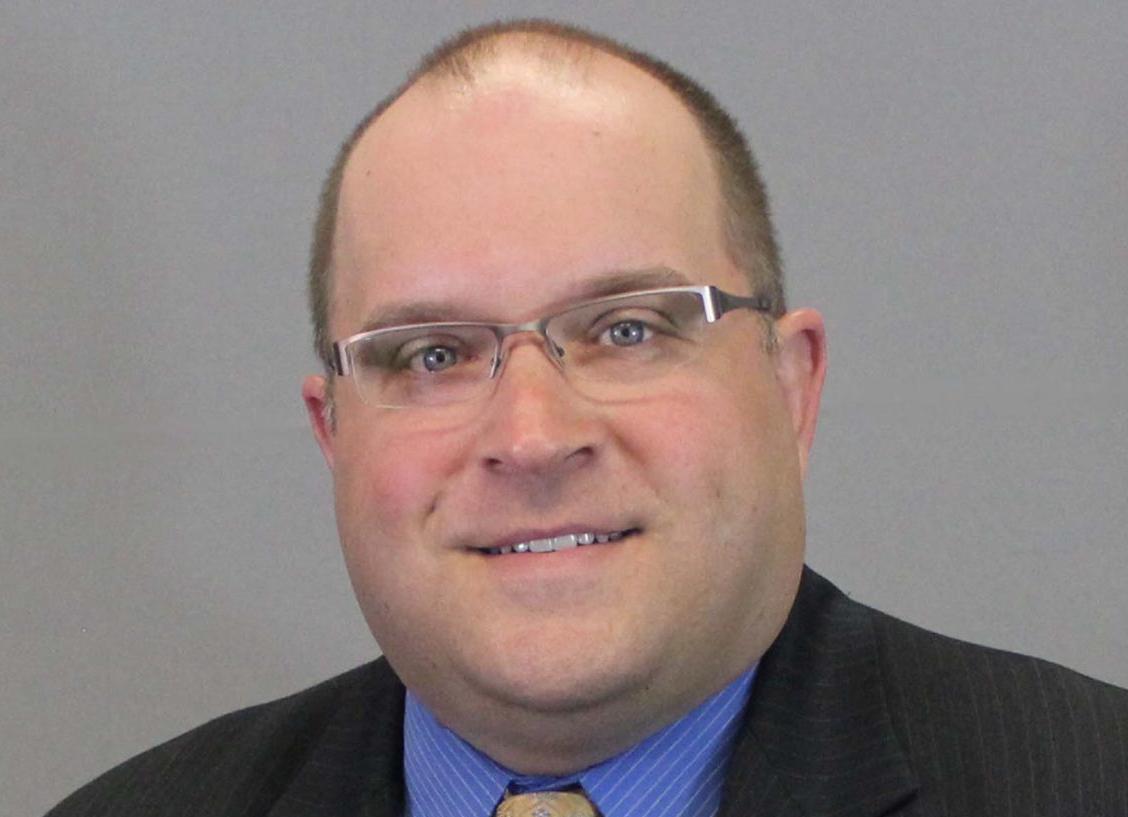 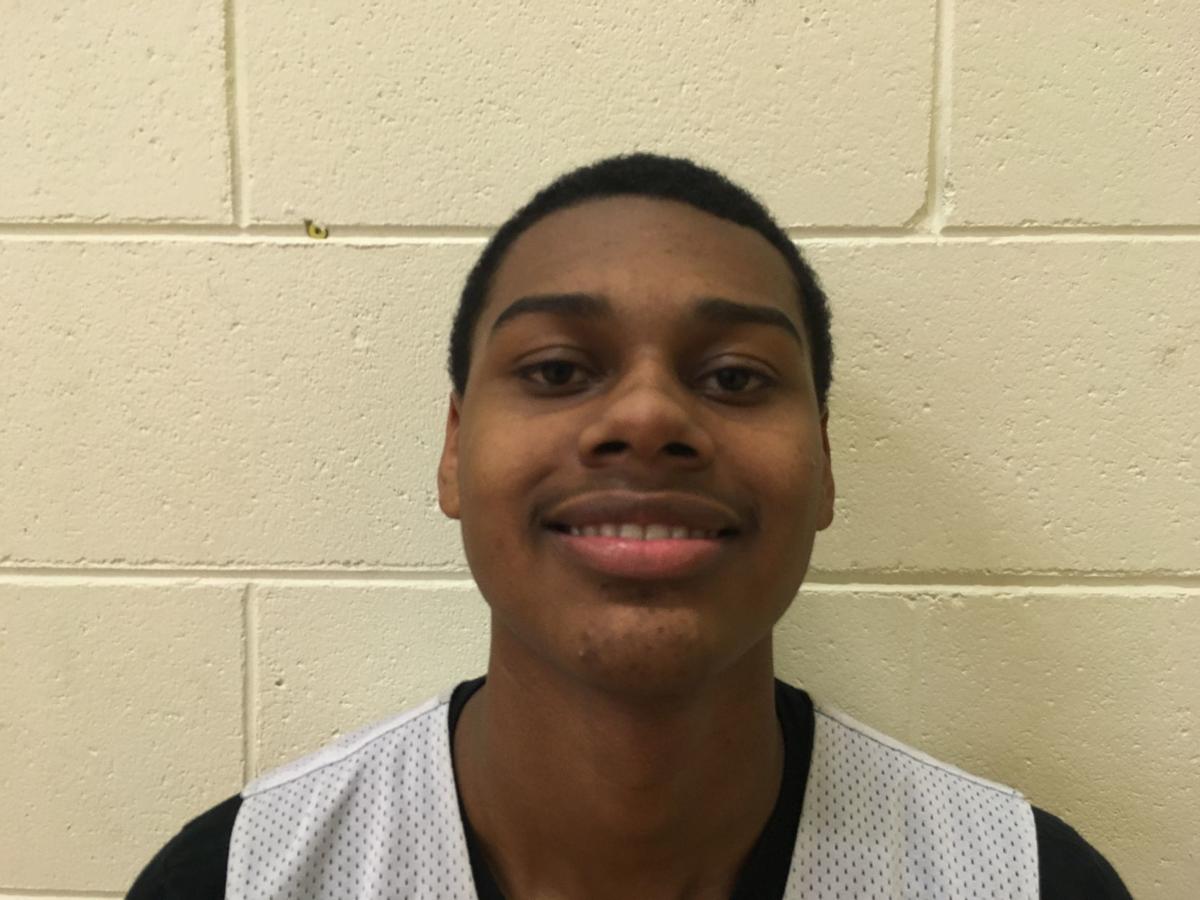 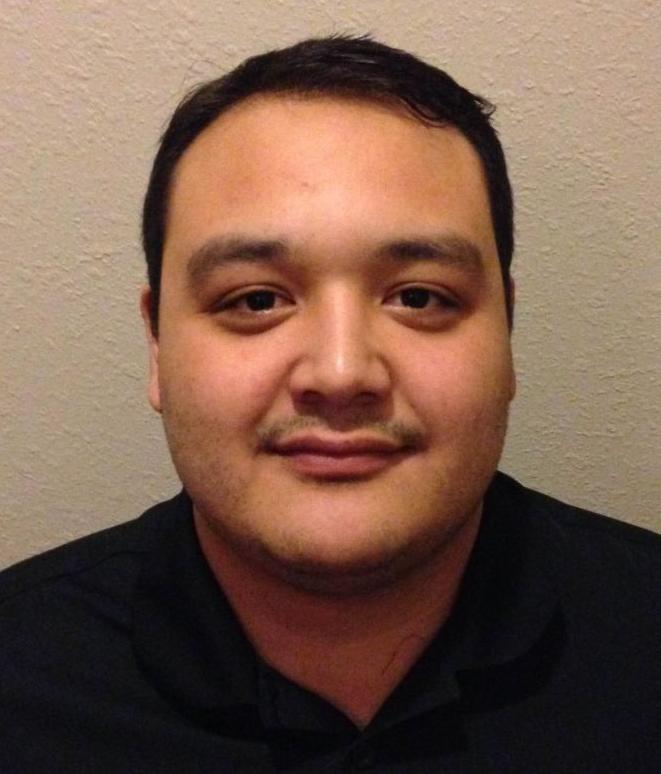