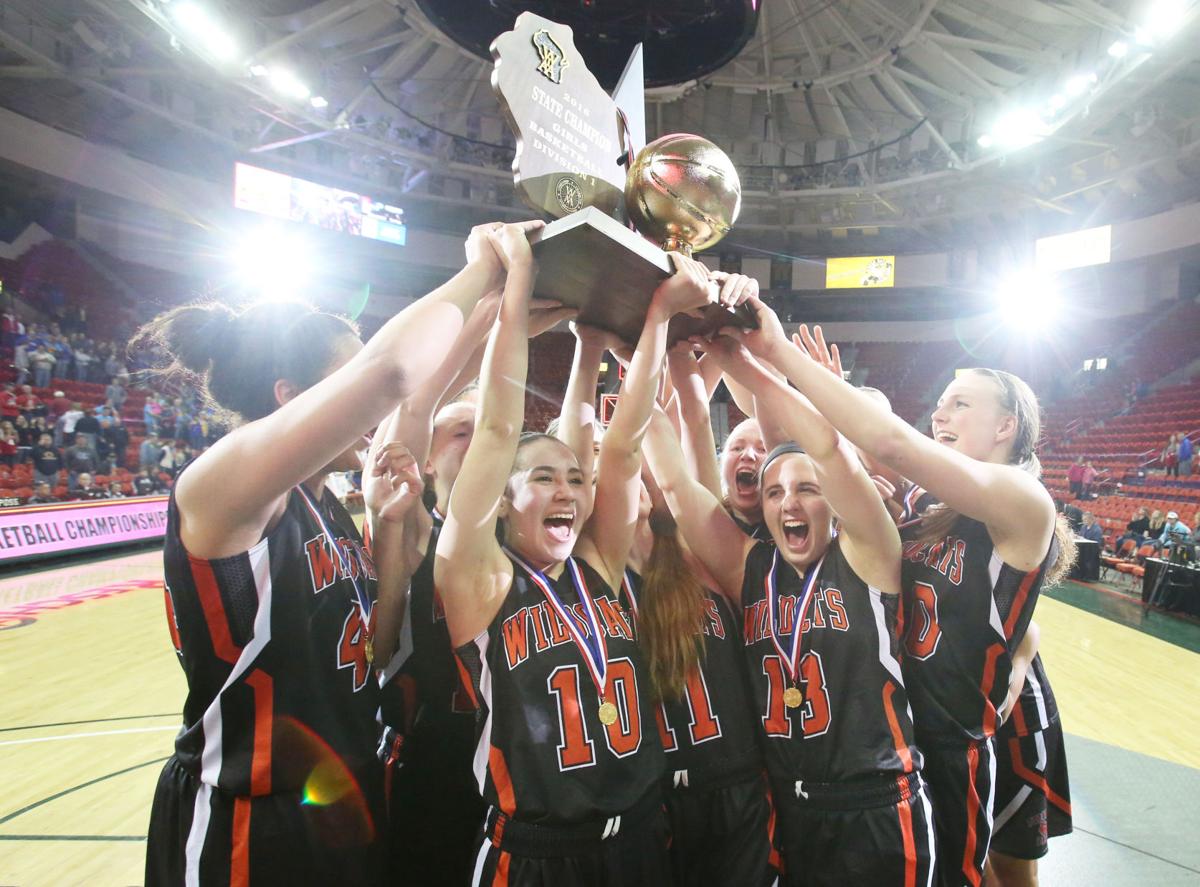 When: Thursday through Saturday.

Tickets: $10 per session at the Resch Center. Season passes available at www.ticketstaronline.com.

Parking: Available for a fee at nearby Lambeau Field.

On the air/streaming: Each game will be broadcast by a statewide network including Channel 27 in Madison, and will be live-streamed online at www.wkow.com and on mobile devices through the Magic of March app. The 3-Point Challenge and postgame media conferences will be shown live on the WIAA.tv portal of the NFHS Network. A subscription will be required to watch the 3-Point contest live. For details

Online: For schedules, box scores, details and tournament history, visit www.wiaawi.org/Sports/GirlsBasketball.aspx or follow @wiaawistate on Twitter with the hashtag #wiaagb.

Tournament history: The tournament moved to the Resch Center in 2013 after 38 years in Madison. The event started with three enrollment-based divisions, growing to four in 1991 and five in 2011. Cuba City has won a state-best 11 championships, followed by Barneveld with six and Milwaukee Washington with five. Cuba City has qualified for state 16 times, Janesville Parker 12 and Barneveld, Durand and Fall Creek 11 times each. 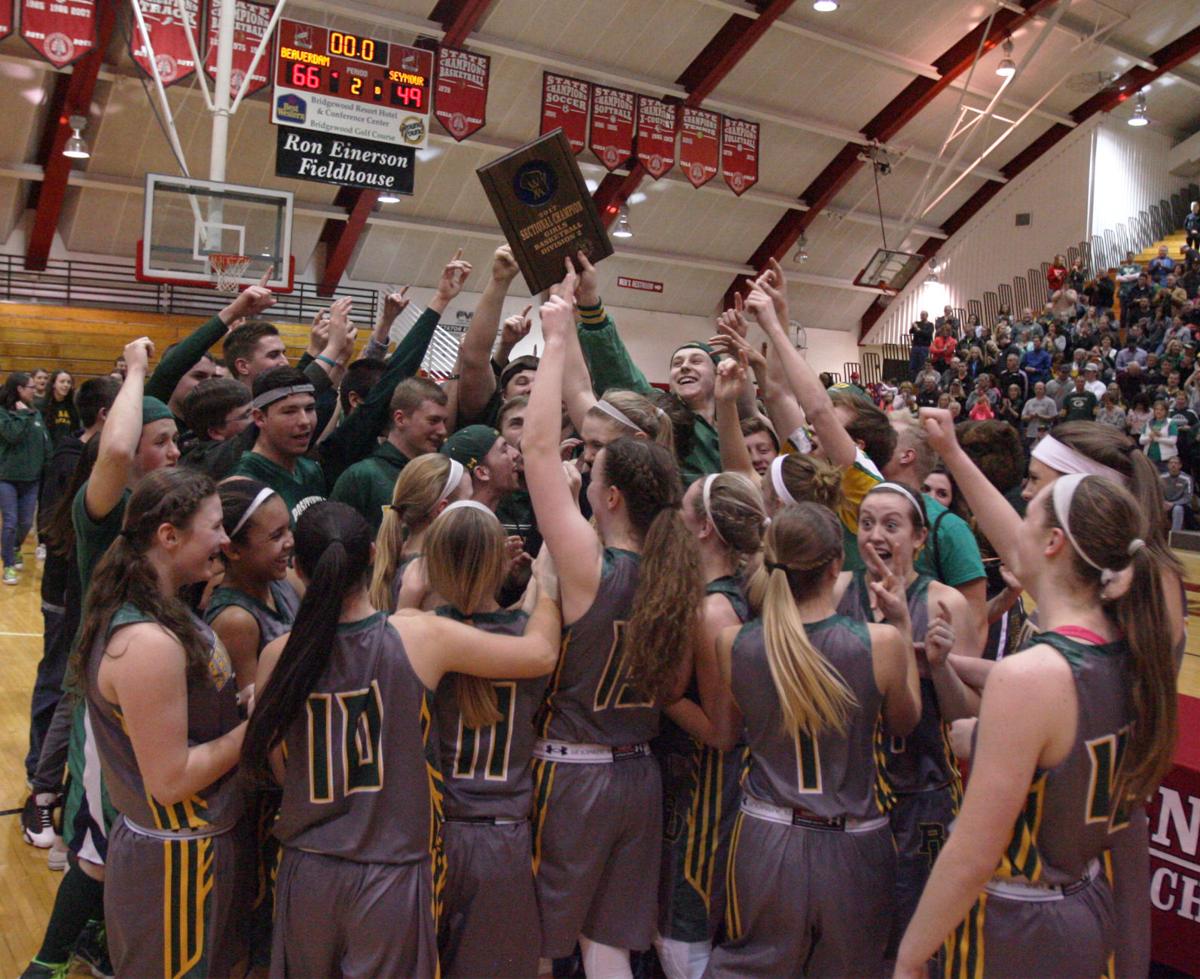 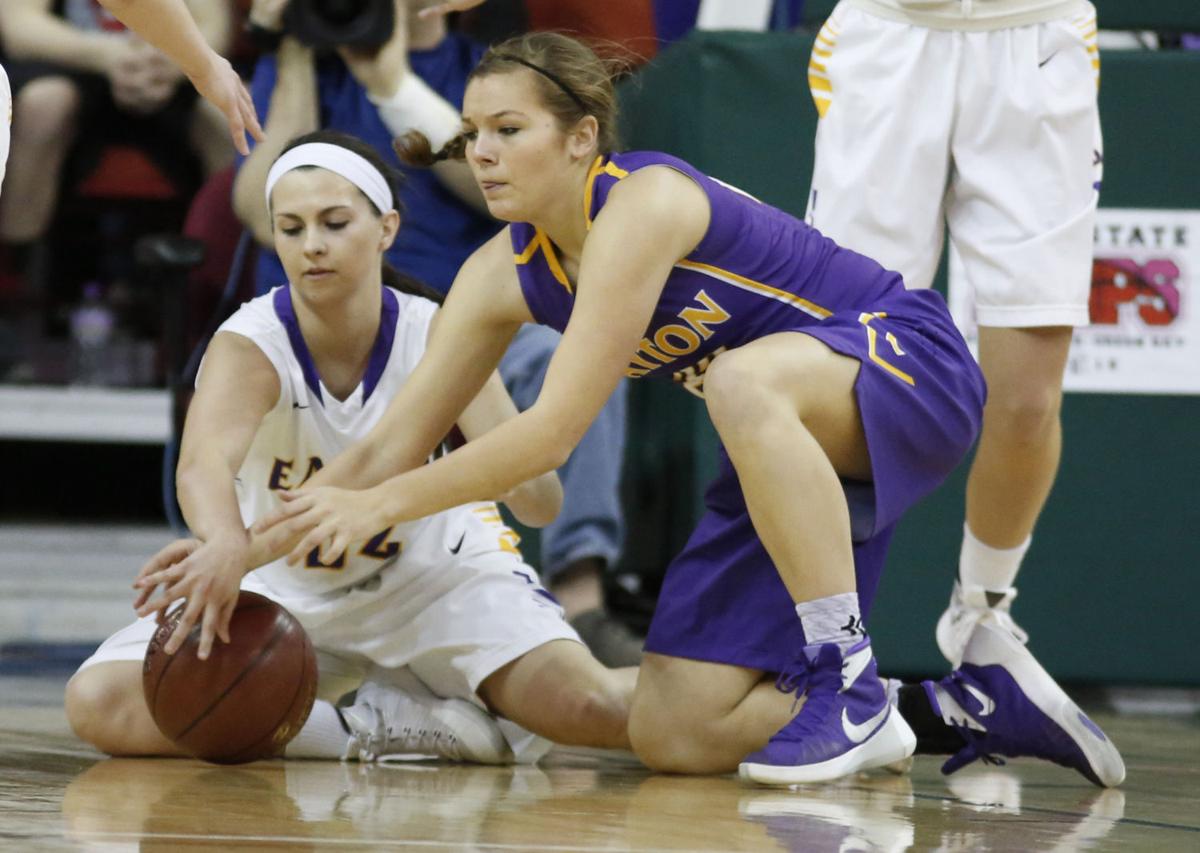 Top-ranked Clayton’s last loss was a 57-46 decision to Barneveld in last year’s state semifinal game. Coach Kevin Fall’s Bears are unbeaten champs of the Central Lakeland Conference and have won their games by an average of 61.5 points to 29.3 points. Their only single-digit victory margins came against Prairie Farm (53-47) and Prentice (53-50). However, Clayton has not played an opponent mentioned in the final state rankings. The Bears have only eight players on the varsity roster, seven of whom play regularly. Alison Leslie, a 5-9 sophomore, averages 16.1 ppg and 6.5 rpg. Sophomore Kailey Ketz, a 5-6 guard, averages 14.8 ppg with 82 assists.

Milwaukee Academy of Science has one of the most intriguing players in the state field in Shemera Williams, a 5-9 sophomore who received a scholarship offer from Marquette University when she was in eighth grade. Williams, who also holds offers from Wisconsin, Kansas State and Valparaiso, leads the state with a 31.1-ppg scoring average, including a 51-point performance in a 76-74 sectional final win over Fall River, and averages 11.3 rebounds, 4.3 steals and 8.4 assists per game. The ninth-ranked Novas, co-coached by Beth Goldstein and David Ziegelbauer, also get 15.2 ppg from 5-9 senior center Tatianya Evans and 10.7 ppg from 5-5 junior guard Tamarra PughTorres. 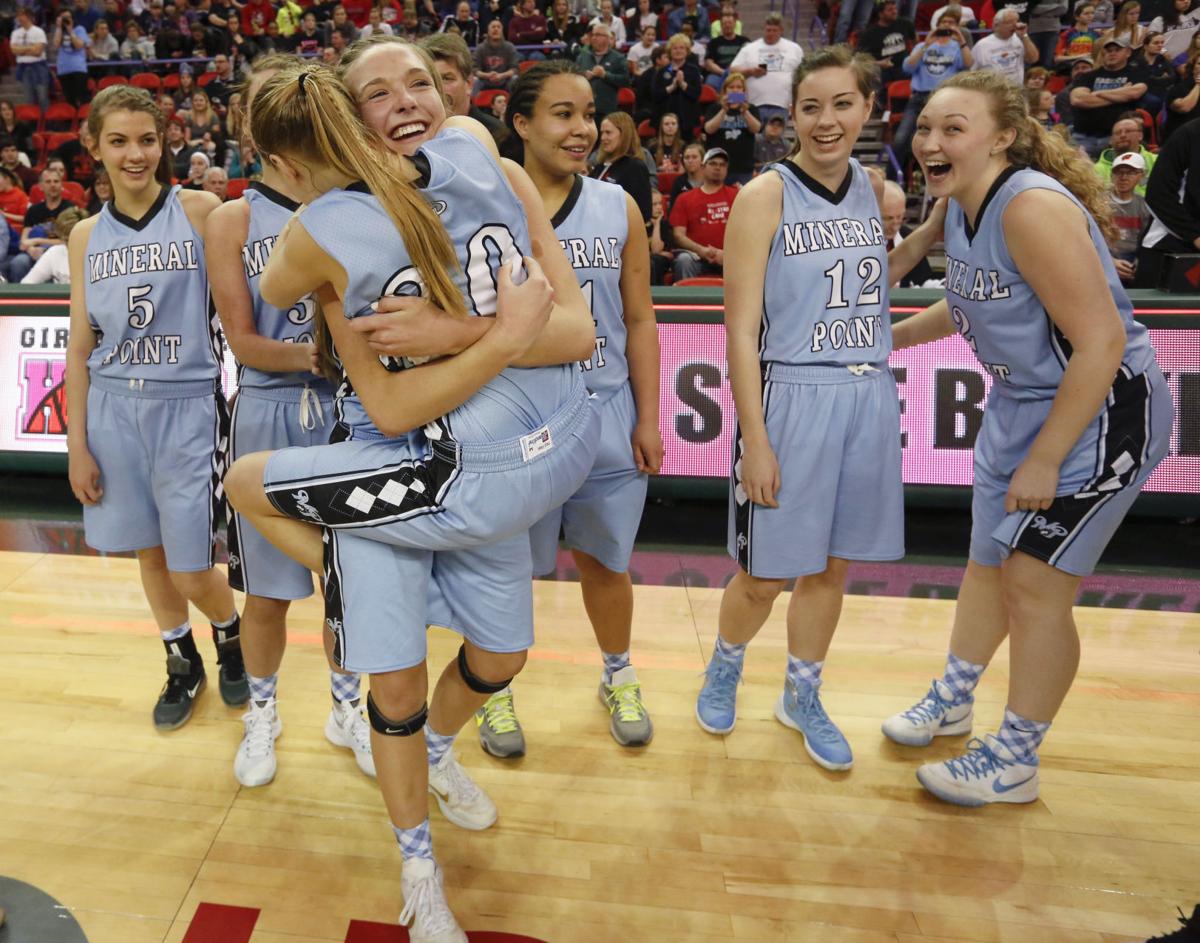 Unranked Shiocton has the most losses (eight) of any team in the state field, but earned its first-ever state trip by winning won eight straight and avenged two losses to Wittenberg-Birnamwood with a 61-36 romp in the sectional final. Coach Rob Hendrickson’s Chiefs, third in the Central Wisconsin 8 Conference, have gotten 13.7 ppg, 7.8 rpg and a team-best 54 assists, 87 steals and 30 blocks from 5-9 junior forward Tina Ubl. Madisyn Morack, a 5-7 senior guard, averages 9.0 ppg. 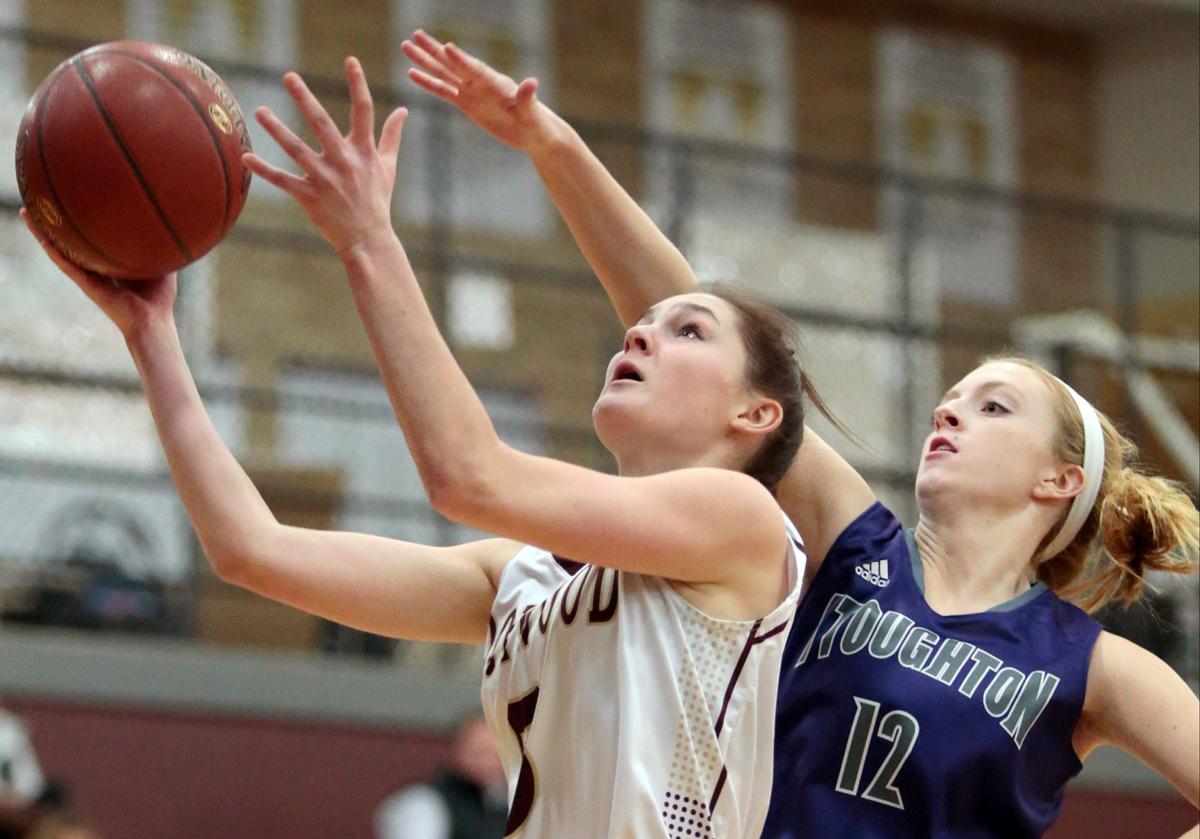 Second-ranked Greendale Martin Luther earned its first state trip with a 63-59 victory over Waupun in the sectional final. Coach Corey Scheel’s Metro Classic Conference champs lost their second game of the year to Division 1 top-ranked Beaver Dam, 74-57, and haven’t lost since. Nine of their victories have been by single-digit margins. Senior Emily Hafemann, a 5-8 wing, averages 12.0 ppg and 2.8 rpg, with 62 assists, and 5-10 sophomore wing Emma Kallas comes off the bench to average 10.4 ppg. Sophomore Bonnie Jensen, a 5-10 guard, leads the rebounders with 5.7 per game.

Bloomer advanced from a No. 5 sectional seeding to earn a state berth, beating Elk Mound in overtime and Somerset by a 72-57 score in sectional play. Coach Nikki Seibel’s 10th-ranked Blackhawks have won 11 of their last 12, avenging losses to Altoona and Elk Mound in tournament play. Chandler Zwiefelhofer, a 5-9 senior guard, averages 11.1 points and 4.1 rebounds, and 6-2 sophomore forward Sierra Raine averages 9.7 ppg and 5.8 rpg. 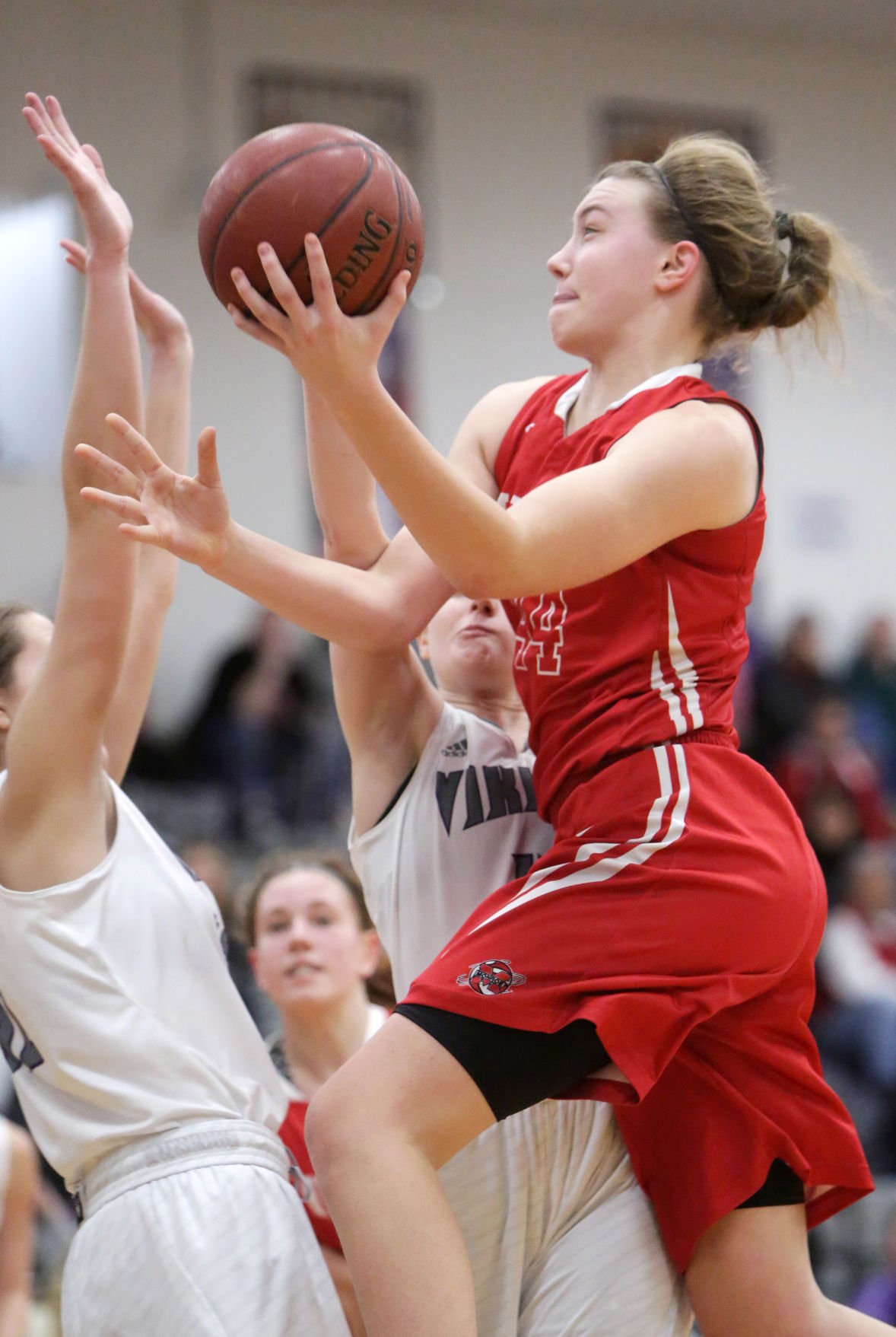 Monroe rebounded from a regular season-ending loss to Madison Edgewood (a Division 3 state qualifier) to storm past four Badger Conference teams, including 2016 state runner-up and third-ranked Stoughton, to earn its first state trip since 2010. Coach Sam Mathiason’s Cheesemakers were ranked eighth in the final AP poll, and has played ranked teams six times — including a 70-49 loss to top-ranked Beaver Dam on Dec. 10. The Badger South tri-champions are led by 5-9 sophomore Sydney Hilliard (19 ppg, 8.3 steals, 4.1 rebounds, .602 field-goal percentage), who has drawn interest from every Division I program in Wisconsin, among others. Emily Benzschawel (5-8 sophomore guard) averages 12.4 ppg and coach’s daughter Sydney Mathiason (6-0 junior) averages 11.3.

Beaver Dam cruised through an undefeated regular season, with its closest games a 13-point win over Milwaukee Pius XI, a 14-point win over Wisconsin Little Ten Conference foe Slinger and a 16-point win over defending Division 2 champ New Berlin Eisenhower. Coach Tim Chase’s Beavers won their four postseason games by an average of 25 points. Senior Cassidy Trotter, a 5-8 guard who has signed with Division II Michigan Tech, averages 15.4 ppg, 3.4 rpg, 2.5 assists and 4.0 steals per game. Sophomore Tara Stauffacher, a 5-11 forward, averages 11.5 ppg and 4.7 rpg. As a team, the Beavers shoot 47.1 percent from the field and 70 percent from the line.

Cudahy may be the Cinderella story of the entire state tournament, and a source of redemption for first-year coach Bob Maronde. Maronde coached at Grafton for 23 years (19 with the girls and four with the boys), winning state titles in 2007 and 2009, but was dismissed from his teaching and coaching positions last April following two classroom disciplinary incidents. So Maronde came to Cudahy and led the Packers to the Woodland East title and their first state tournament berth, thanks to a 47-45 sectional semifinal victory over defending state champ New Berlin Eisenhower and an overtime win over New Berlin West in a regional final. Cudahy started 3-5, but avenged three of those losses (plus one to Eisenhower) while winning 16 of their last 18 games. Junior Hannah Kulas, a 5-11 junior, averages 16.3 ppg and 7.7 rpg, with 61 blocks and 70 steals. Senior Bailey Eichner, a 6-1 guard who will play at Division I William and Mary, averages 12.5 ppg and 6.9 assists with 70 steals.

Hortonville is at state for the second time; its last appearance was a one-and-done trip in 1987. First-year coach Celeste Ratka, a product of the Hortonville program, led the Polar Bears to a second-place finish (behind Division 1 qualifier Appleton North) in the Fox Valley Association. They have won five in a row and 12 of their last 14. The team has two Division I commits in Valparaiso-bound junior Shay Frederick (5-5 guard, 17.1 ppg, 3.5 rpg, 82 assists, 57 steals, .739 free-throw percentage) and Indiana University-Purdue University-Indianapolis commit Morgan Allen (6-1 senior center, 15.5 ppg, 7.8 rpg, 22 blocks, .558 field goal percentage). 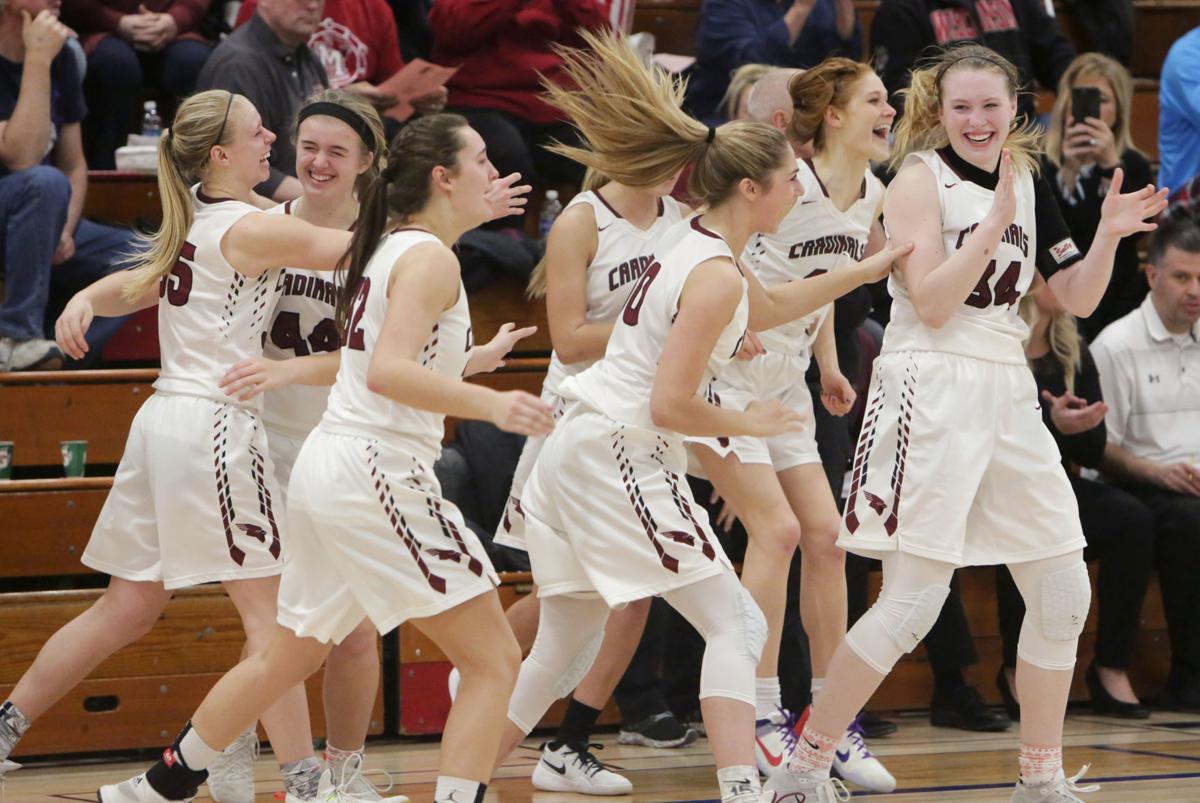 De Pere is back at state for the eighth time and its first since winning the 2012 title. Coach Jeremy Boileau’s Fox River Classic Conference champion Redbirds, ranked third, have won 16 straight games and 23 of 24, interrupted by a 47-38 loss to Bay Port on Dec. 29. They beat fourth-ranked Germantown 67-59 in a sectional final. Senior Lizzie Miller, a 5-7 guard named the league player of the year, averages 15.4 ppg and 3.9 rpg with 62 assists. Point guard Olivia DeCleene (5-2 senior guard) averages 8.9 points and 3.8 assists. Both average better than 51 percent shooting from the field. Liz Nies (6-0 senior center) averages 8.7 ppg and 6.3 rpg.

Appleton North has held the No. 1 spot in the state rankings from wire to wire, building a 26-0 season with only four games decided by 10 or fewer points. The Lightning’s only ranked opponents (in the final poll) were Appleton West (honorable mention in Division 1) and Division 2 state qualifier Hortonville (honorable mention). Junior Sydney Levy (5-8 guard), a UW-Milwaukee commit, has averaged 18.9 ppg and 8.8 rpg with 42 steals and 61 3-point baskets. Coach Joe Russom’s team also gets double-digit scoring from 5-6 junior guard Kari Brekke (10.8 ppg, 102 assists) and 5-10 sophomore forward Paige Schabo (10.7 ppg, 23 blocks).

The Crusaders will face Wrightstown in a WIAA Division 3 semifinal on Thursday afternoon.

WIAA state girls basketball: It's as easy as A-B-C for Middleton's Lemirande triplets

Seniors Alyssa, Bria and Carlee Lemirande lead the Cardinals (23-3) into Friday night's Division 1 semifinal vs. De Pere (24-2) at the Resch Center in Ashwaubenon.

Super Sunday -- Test yourself with our Big Game Trivia Quiz!

Get exclusive local and national political news in your inbox.