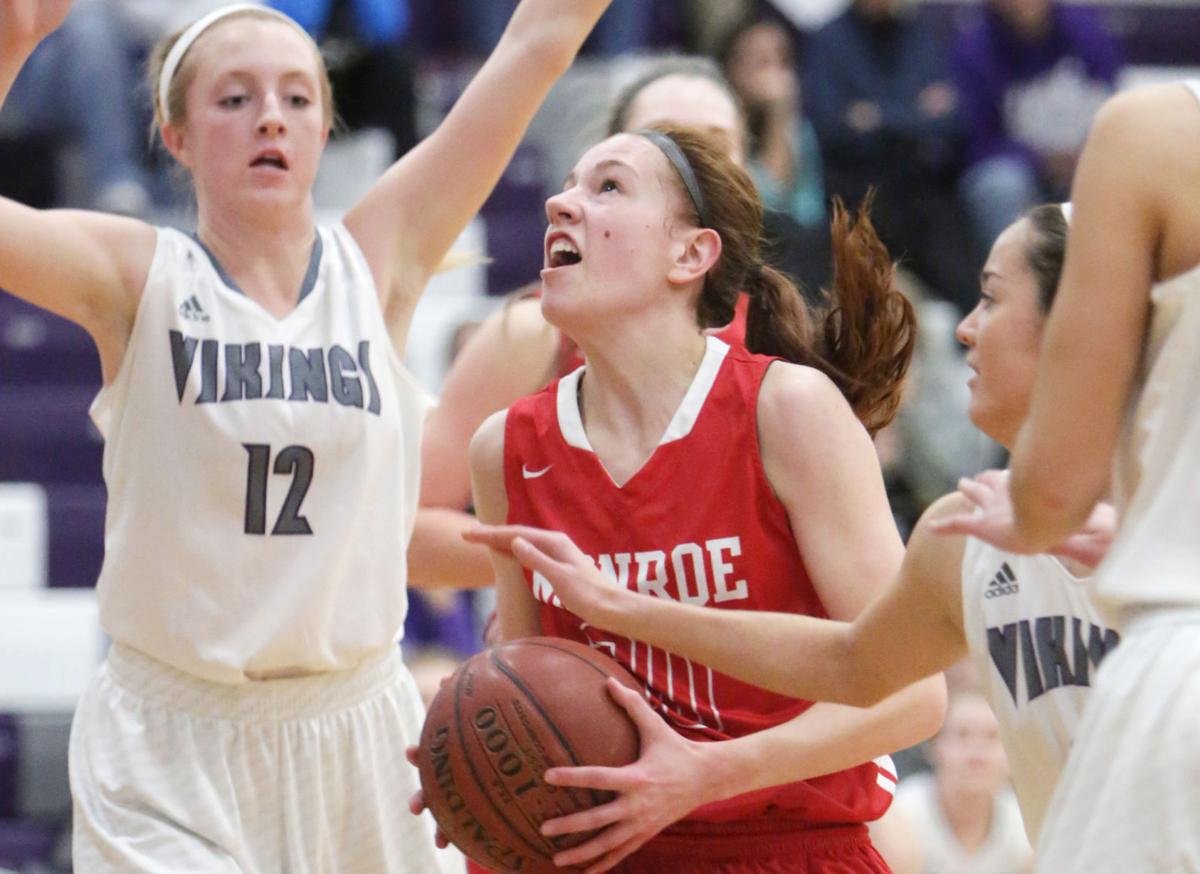 Monroe's Sydney Hilliard (30) goes for a shot against the defense of Stoughton's Kendra Halverson (12) and Peighton Trieloff (20) in the first half of a Badger South Conference game at Stoughton High School in Stoughton, Wis., Tuesday, Jan. 31, 2017. AMBER ARNOLD, STATE JOURNAL 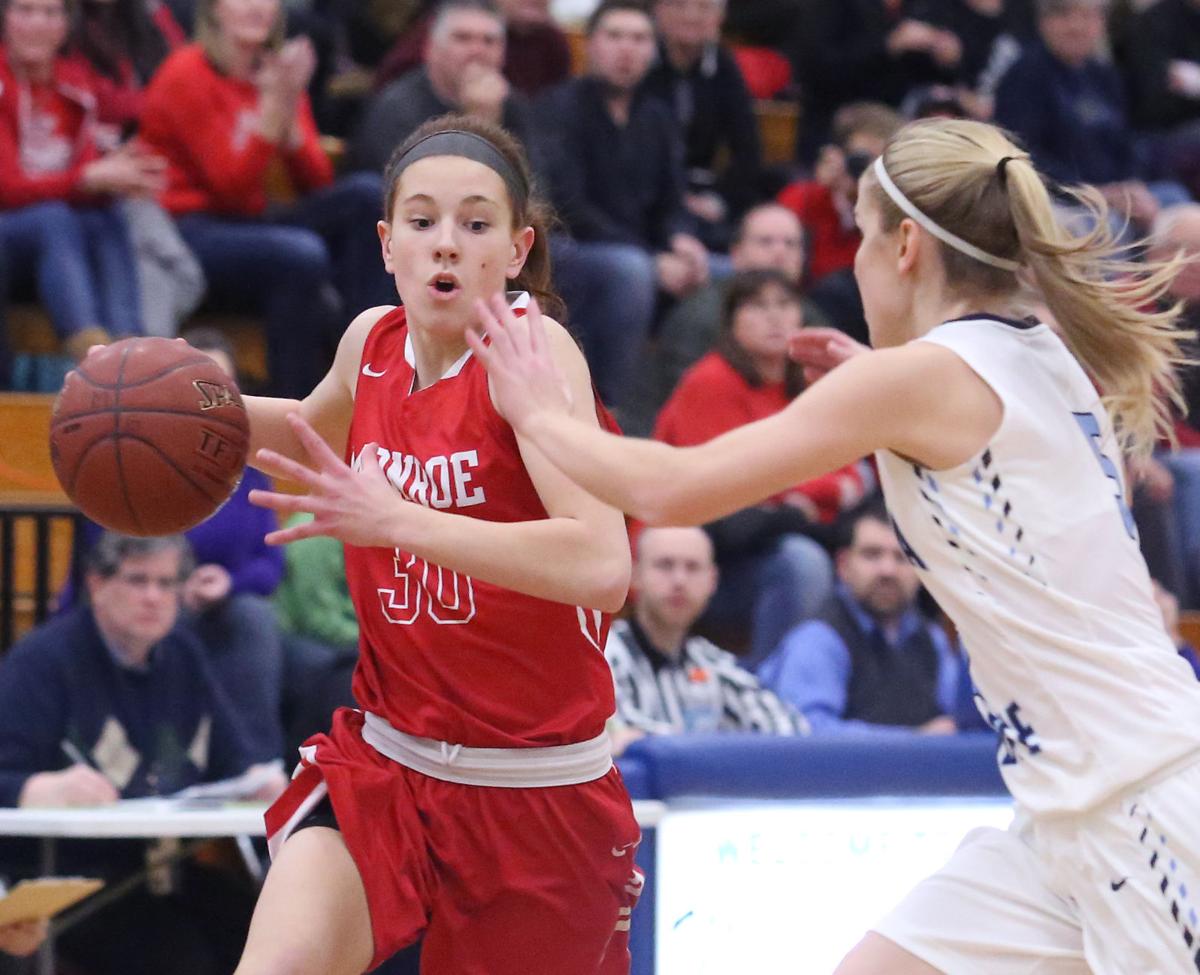 Monroe's Sydney Hilliard brings the ball up past the defense of Monona Grove's Peyton Blang during the first half of the Cheesemakers' 60-59 victory on Friday night.

MONROE — Sydney Hilliard, not unlike many kids her age, would prefer to use her phone for its original intended purpose only as a last resort.

But she’s willing to make exceptions.

Like the two or three or four or five times a week when she breaks down and agrees to call people at least twice her age that in most cases she barely knows.

Such is the price of being a highly recruited basketball player. That is what Hilliard, a 5-foot-9 sophomore guard for Monroe High School, has become over the past year as she’s attracted attention from a growing number of college coaches.

NCAA rules prohibit college coaches from directly contacting recruits until the start of their junior years. Instead, they pass along requests to high school or AAU coaches to have the player call them.

Which has led to some angst-filled days for Hilliard.

“I’ve never really liked phone calls,” she said. “I remember my first phone call to an assistant at South Dakota State. I was nervous the whole day to call.”

Then there was her first call to new University of Wisconsin coach Jonathan Tsipis last April after an AAU tournament in Stoughton. She made her dad pull over on the way home and ordered everyone out of the car so she could converse in private.

“Any big-name schools are really intimidating,” Hilliard said. “I just hope I don’t sound like an idiot talking to them.”

Not to worry because whatever phone skills she may be lacking, she more than makes up for it on the basketball court.

Hilliard is averaging 18.5 points and 8.3 rebounds for the sixth-ranked Cheesemakers (17-3, 10-2 Badger South), who will begin WIAA Division 2 tournament play Friday night against the winner of tonight’s game between Portage and Oregon.

“We’ve had a very nice season and she’s a big part of it,” said Monroe coach Sam Mathiason, whose team shared the conference title with Madison Edgewood and Stoughton. “There’s a special chemistry where she really has no ego and is looking for other people’s success before her own. For as good a basketball player she is, she’s probably a better kid in all the ways possible.”

Mathiason’s earliest remembrances of Hilliard are of her playing T-ball and softball along with her sister Lexi, who is two years older and now a basketball teammate.

“I think some of the hand-eye skills she has that you see on the basketball court go back to that time,” Mathiason said.

But while her dad, Greg, was a pitcher for two seasons at UW and was a member of the team when the sport was dropped in 1991, Sydney’s passion was for basketball. After attending a basketball camp at Stoughton’s Wisconsin Academy in fourth grade, she was hooked.

“She’s a kid that has always wanted to be the best,” said Kristin Krueger, who has coached her with the AAU program since sixth grade. “She was really short and she wanted to figure out how to score as a smaller kid, so she put in a ton of time to find different ways to score against bigger kids. Since then she’s grown six or seven inches, so she’s definitely raised her game.

“She was one of those kids where you walk in the gym and she just stands out with how hard she works. She kind of has that swagger. As a sixth-grader she could handle the basketball better than a lot of very good high school players I’ve worked with.”

Hilliard became an instant starter as a freshman, leading the Cheesemakers in scoring at 15.1 points per game. And she’s taken it to another level this season, shooting 60 percent from the field and contributing 3.3 assists and 4.4 steals per game.

“The way she can handle the ball, especially in tight situations, is unlike anybody that I’ve seen in my time,” Mathiason said. “She has that ability to change speed and leverage people to get to the area she wants to unlike anyone I’ve seen.

“And she has the ability to finish. Her offensive skill set is just incredible with her ability to make plays around the basket with some of those teardrop shots, and those pull-ups she has.”

So far, Hilliard has received six scholarship offers — from South Dakota State, Northern Colorado and each of the state’s Division I programs, UW, Marquette, UW-Green Bay and UW-Milwaukee.

Numerous other schools have expressed interest, leading to a steady stream of college coaches to Monroe games and her AAU contests with Wisconsin Academy. Mathiason and Krueger share the contact duties and let Hilliard know when someone will be watching her.

“I always tease her that I’m just an underpaid glorified secretary for her,” Krueger said.

Hilliard has attended several UW games this season and has visited each of the other in-state schools. But she’s in no big hurry to make a decision.

“It’s exciting going to different colleges and seeing how certain teams play,” she said. “Going to their practices is really fun to just watch them compete and how the coaches react to players. If the team feels right and the coach feels right, I think that will be a big impact. I don’t really know when I want to decide. It will all just sort of happen.”

While Hilliard’s game already is diverse, one area she has room for improvement is her perimeter shooting.

“That’s definitely something I need to work on,” said Hilliard, who is just 8 of 29 from 3-point range this season. “I know I can do it but the confidence level is not quite there yet in games.”

When that happens, Mathiason said, good luck trying to defend her.

“Right now you have to lay off her just because she’s so good with the ball,” he said. “As Sydney becomes more consistent at that outside shot, that’s the next layer of her game. The next two-plus years she’s going to be a tough guard.”

And after that she will join a list of Monroe alums to go on to play in Division I, following players such as Peggy Shreve (UW), Kelsey Hendrickson (North Dakota State) and Ellie Radke (Canisius).

“We’ve actually had more than our share for a small town,” Mathiason said. “Clearly, Sydney is taking it to a completely other level to have the major Division I offers that she has. They don’t just give those out and they obviously see that her game is very good and has the potential to be played at another level.

Monroe's Sydney Hilliard (30) goes for a shot against the defense of Stoughton's Kendra Halverson (12) and Peighton Trieloff (20) in the first half of a Badger South Conference game at Stoughton High School in Stoughton, Wis., Tuesday, Jan. 31, 2017. AMBER ARNOLD, STATE JOURNAL

Monroe's Sydney Hilliard brings the ball up past the defense of Monona Grove's Peyton Blang during the first half of the Cheesemakers' 60-59 victory on Friday night.