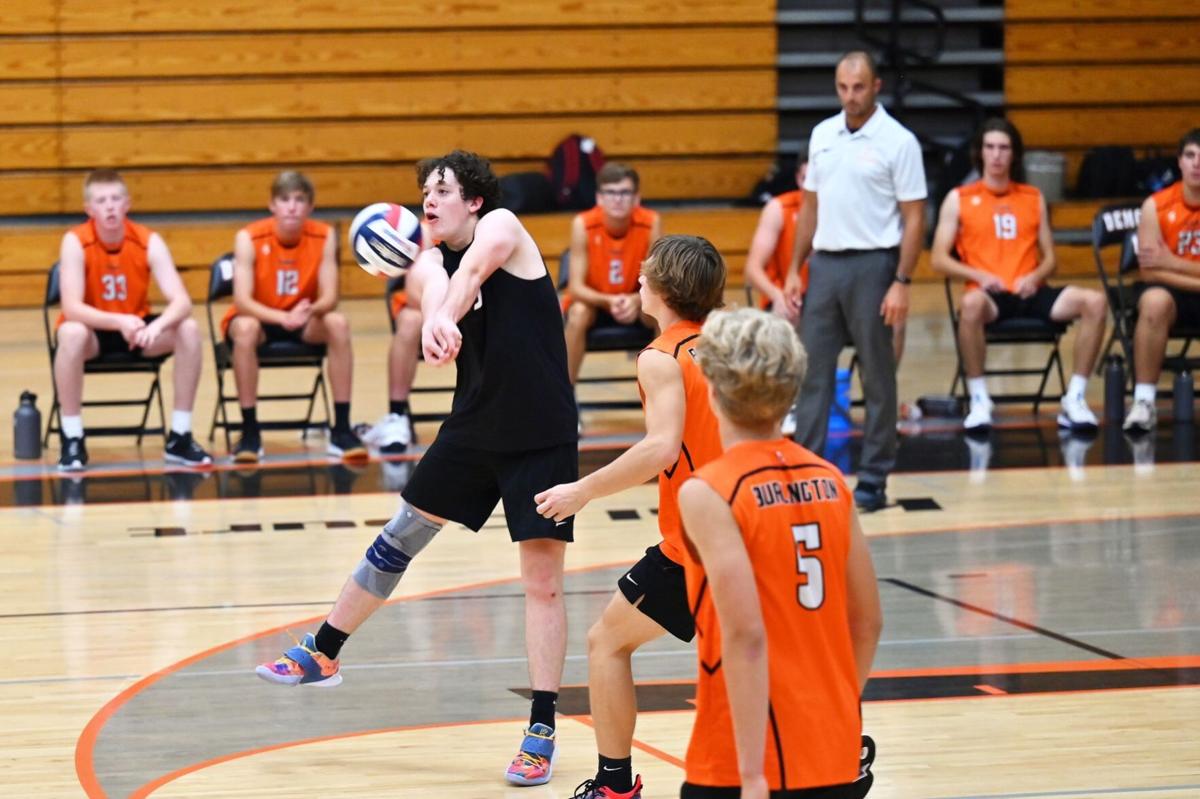 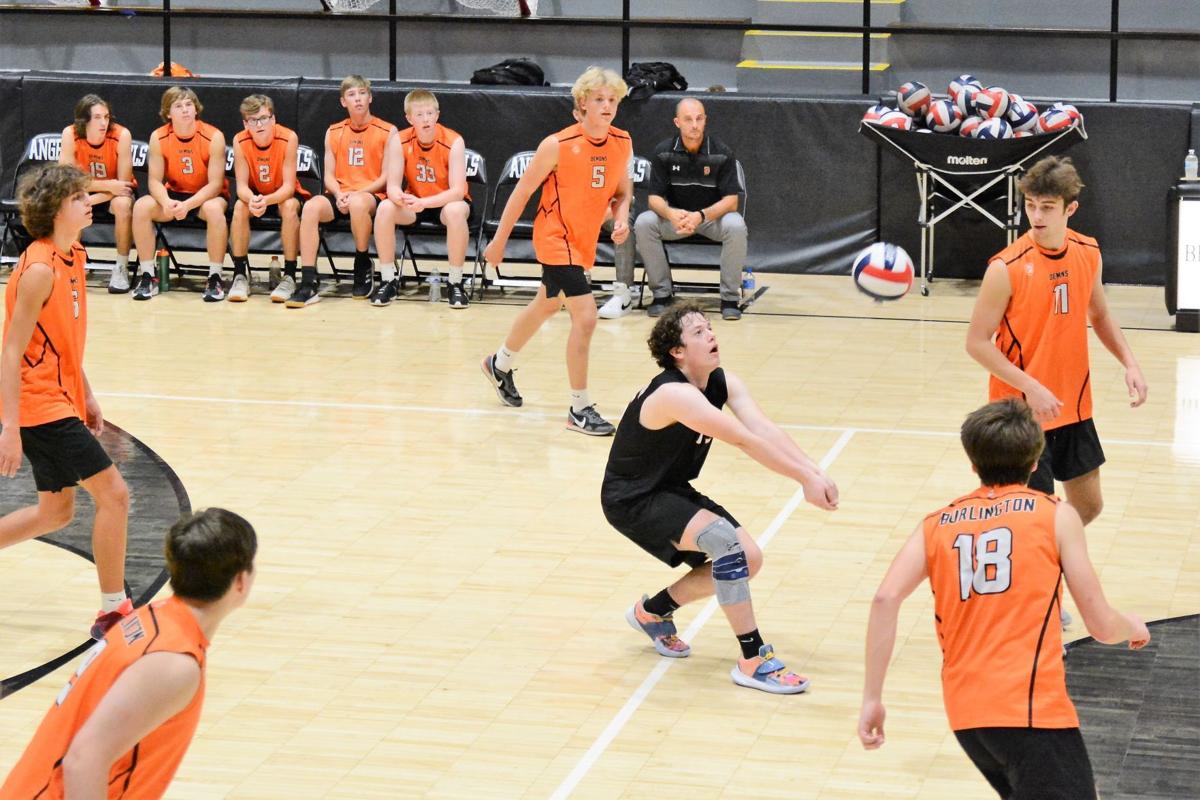 Jackson Phillips (dark jersey) made the difficult decision to transfer from Catholic Central after his freshman year so he could play high school volleyball. Within two years of joining Burlington's program, he led Burlington to an 16-13 record and berth in a WIAA sectional tournament.

As difficult as the choice was, Jackson Phillips felt it was one he had to make.

After his freshman year at Catholic Central High School in 2020, Phillips decided to transfer a few miles to the southeast to Burlington High School. As much as he loved Catholic Central, as welcome as he felt there, the school doesn’t offer a boys volleyball program and Phillips lives for that sport.

“It was really difficult because my mom (Theresa) was teaching there at the time and all of my family has gone through Catholic Central,” Phillips said.

That included sister Izzy, his only sibling who was a member of Catholic Central’s state power girls volleyball team.

But Phillips wanted to create an identity for himself and he did just that. Sixteen months after he transferred, Phillips was named the All-Racine County Player of the Year by the county’s coaches.

“I’m grateful for everyone who voted for me,” Phillips said. “And I’m also grateful to my team, who just pushed me to get better at practice. I think it’s a big honor to be named this and I’m glad I was able to do it, but I can’t take all the credit.”

“It was really different, because I had never done anything like that (cross country),” Phillips said. “It was a much different experience, but I met a lot of really good friends through cross country.

“But at Catholic Central, I really wanted to play volleyball. I really look forward to playing volleyball in college and I knew that playing in high school was something that would really help me play in college.”

He decided to transfer, even though his parents and only sibling had attended Catholic Central. As difficult as it was, it worked out well for Phillips.

Stepping in at Burlington. Phillips made an immediate impact on a team that went 4-6 during a season that was shortened by the COVID-19 pandemic in 2020.

One year later, he led the Demons to a 16-13 record and a WIAA sectional appearance. Phillips led the Demons in several categories, including digs (363) and aces (38).

“Jackson has been an amazing addition to the Burlington lineup over these past two years,” Burlington coach Mike Jones said. “As a Catholic Central transfer, Jackson came in and worked hard to prove he should be on the court.

“With Catholic Central being in town, Jackson came in knowing a lot of the guys through club volleyball. The transition was very smooth and, right away, his teammates welcomed him to the team and supported him as if he’d always been with the team since his freshman year. I think it could have been tougher if he’d come in his junior or senior year, but he came in young and established himself as an outstanding backrow player.”

Union Grove coach Jamie Anderson was among those who admired what Phillips brought to the table.

“What impressed me the most about Jackson was his ability to take up such a large amount of space on the court and to extend plays for his teams,” Anderson said. “At times, I felt we could use a cannon to send the ball his way and he would just smile and add another dig to his totals for the day.”

While Phillips’ junior season is over, he remains consumed with volleyball. When the University of Wisconsin women’s volleyball team defeated Nebraska Dec. 18 to win with NCAA championship, for instance, Phillips was watching the broadcast.

“I have really started focusing on volleyball so much more,” he said. “I watch volleyball constantly and I’m constantly trying to pick up new things and I really try to implement that into my game and find different ways of getting better.

“And my coaching staff at Burlington has been helping me so much, especially over this last year. They’re talking to me about defense and serve-receive and always helping me out. They’re giving me pointers that are useful.”

More pointers came from being a devoted fan of the Wisconsin women’s team.

“I’ve been watching the Badgers this entire season and I’ve gone to a couple of games,” he said. “I was hoping to get to Columbus (site of the national tournament in Ohio), but just with COVID, it didn’t line up.

“And I watch a lot of professional volleyball on YouTube, My social media is filled with volleyball and it’s just something I really enjoy watching.”

With one more season remaining at Burlington, Phillips expects to be better than ever. Jones is expecting the same from his team with Phillips leading the way.

“I couldn’t be more excited that he made the transition and I look forward to an amazing season next year,” Jones said. “We are going to be even stronger than we were this year just due to depth and team chemistry and we had a great year this year, so we’re hoping for bigger things this season.

Jackson Phillips (dark jersey) made the difficult decision to transfer from Catholic Central after his freshman year so he could play high school volleyball. Within two years of joining Burlington's program, he led Burlington to an 16-13 record and berth in a WIAA sectional tournament.