The calculations run through Chris Orr’s mind quickly, like a computer processing information and predicting an outcome.

Orr, a senior middle linebacker for the University of Wisconsin football team, takes in all the available data in front of him to make a sound, educated assumption on what an opposing offense might try on a particular play.

“But at the end of the day, it’s lining up, reading your keys, and making a play when it happens. You don’t really know, but you can have an idea.”

Orr and his defensive teammates have had a pretty good idea of what’s coming on third down this season. The eighth-ranked Badgers boast the Football Bowl Subdivision’s second-best third-down conversion rate allowed at 15.9 percent (11 of 69).

Northwestern had the best day against UW on third down this season with four conversions on 20 tries. Between the second half of their game against Central Michigan and the first half against the Wildcats, the Badgers had a string of 28 consecutive third-down stops, including stopping all 10 of Michigan’s attempts. Opponents have needed an average of 8.5 yards on third down — UW has allowed just one conversion of 9 yards or more, and that play came in the opener against South Florida.

One caveat to mention — UW has allowed four third-down conversions via penalty, but those plays don’t go against third-down statistics.

UW (5-0, 2-0 Big Ten Conference) puts these numbers on the line when it hosts Michigan State (4-2, 1-1) in its Homecoming game Saturday at Camp Randall Stadium.

“We just go in and follow the game plan. We know on third down, we want to challenge and we want to get after those guys. It’s paying off. That’s something that we’ve had to work on from last year. That was a really big emphasis — third downs, and getting off the field and getting the offense back on the field,” sophomore cornerback Faion Hicks said.

“I think we’ve done a good job so far, and I think we will continue to do a good job throughout the season.”

Becoming a strong third-down defense starts with being successful on first and second down. UW defensive coordinator Jim Leonhard has been able to dial up pressure on third down when he wants to, and those chances present themselves more when the distances to gain are longer.

All three levels of the defense have played a role in the success on third down.

UW has 21 sacks through five games, two more than it had all of last season. All but two of those sacks have come from defensive linemen or linebackers. Leonhard feeling comfortable sending pressure shows confidence in the secondary, which is bouncing back after a shaky 2018.

Badgers’ coach Paul Chryst said senior leaders like Orr and Zack Baun are playing at a high level, and are challenging the defense to continue its stellar play.

“Certainly there’s been a good plan, and a plan I think that’s favorable to our guys, understanding who our players are. They’re believing in it. Our players know it, they believe it, which allows you to cut it loose,” he said. “And that’s what’s also fun about it, you know you’re going to be tested each week differently.”

Keeping this third-down pace will be difficult in the coming weeks. Playing Michigan State, Ohio State and Iowa’s offenses in the span of five weeks will test all aspects of the defense. But if the Badgers can somehow continue their play on third downs, they could threaten the program’s third-down percentage record of 27.9 percent set in 2016.

Hicks said controlling third down is a way to control momentum throughout a game, and has become a point of pride for the defense.

Wisconsin linebacker Chris Orr (54) recovers a fumble against Michigan running back Hassan Haskins (25) during the Badgers' 35-14 win on Sept. 21 at Madison. 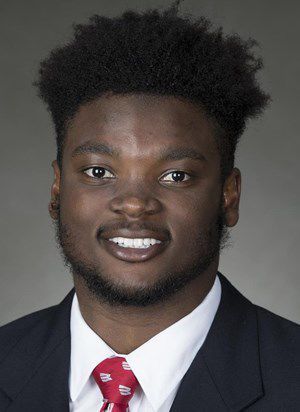