Packers vs. 49ers: Follow updates from the NFC Championship game

It comes to life every fall Sunday inside a broadcast center in Marina del Rey, where Andrew Siciliano hosts DirecTV's Red Zone, simultaneously monitoring every football game during the day and narrating the most exciting and interesting moments.

Flanked by two on-stage researchers in headsets, Siciliano never stops pacing the studio's glossy black floor - a place about the size of half a tennis court - and his eyes seldom stray from a wall of 10 high-definition screens showing the games. Red stage lights bathe everything in a ruby hue.

It's Week 13 of the regular season, the Sunday after Thanksgiving, and the playoff picture is coming into focus. There are eight games in the morning - none bigger than San Francisco at Baltimore - and three in the afternoon, virtually all with postseason implications.

Red Zone shows two, three, even four screens at once, ideal for fantasy football, and catering to an audience with an ever-dwindling attention span.

"We've raised a generation of young fans that has a hard time sitting still for one game at a time," said Siciliano, 45. "We didn't create America's short attention span, but we came along at the right time."

Siciliano works with Bill Wagner, the producer in his ear, to direct the show on the fly and choose which games to cut to at a given moment. Siciliano seldom trips over names or statistics. When he does, he jokes about it as if he's sharing the living-room couch with the viewers.

At times, he speaks as quickly as an auctioneer, relaying information with the urgency of a quarterback running a two-minute offense. Frequently, his glib irreverence shows through.

Fueled by an endless supply of coffee and chocolate chip cookies, he doesn't sit for seven hours, until the final game of the day finishes. He wraps up before the Sunday night game begins on NBC. On this Sunday, he has a plate of chicken and rice but checks with Wagner each time he's about to take a bite to make sure there's sufficient time to chew. The job is truly nonstop.

"If someone's going to be talking about the moment in the game, whether it's a wow play, a pivotal down, a key challenge, a coaching blunder, someone in a wacky costume in the stands ... we want to show that," Siciliano said. "We want to show it as quickly as possible without missing anything else in the game.

"It's impossible, honestly, with eight games. You're going to see things on tape. But the one thing we will never do is show you something and act as if it's live."

There are actually two such channels, one launched by DirecTV in 2005 and an NFL Network version, NFL RedZone, hosted by Scott Hanson, that started four years later. Both have the same aim: football without the fluff. No punts, unless they're blocked or run back for touchdowns. No waiting around for replay reviews. No commercials.

"I equate the job to Indiana Jones running across a suspension bridge, and the enemy has cut one side of it loose and the bridge is collapsing behind him," Hanson said. "You can't slow down. You can't stop. You can't turn your head back and wonder what's going on back there. Because if you stop for a moment, you're lost. It is constant action going forward. You have to keep it going no matter what. And it's like that for seven hours."

Siciliano and Hanson, onetime classmates at Syracuse, are the NFL's answer to air-traffic controllers - and Hanson even uses the corresponding terminology.

NFL Red Zone host Andrew Siciliano discusses how he and channel's production team approach football coverage every Sunday during the season while speaking to The Times' Sam Farmer.

The NFL declined to release its actual number of red-zone viewers, except to say that audience comprises less than 10% of the entire viewership. By the league's count, more than 170 million people have watched games this season.

"What we see in the red zone viewing is that, relative to game viewership on a Sunday afternoon, it's a small number and it hasn't substantially grown, which is fine with us," said Brian Rolapp, chief executive of NFL Network and the league's executive vice president of media. "It's such a wonderful product that people who watch it talk about it religiously and love it."

Rather than being a threat to the NFL's broadcast partners airing games in a particular market, red zone complements the over-the-air games and gives viewers an alternative that holds their attention on football.

"What happens is people watch the games in their market, and if the game's not that good, maybe years and years ago they would sit through it because there weren't a lot of alternatives," Rolapp said. "Today, you're one click away from a million Netflix shows and YouTube and whatever you want. This gives them an alternative to watch more football, and we like to keep them in the NFL ecosystem."

The seeds for a channel with full coverage of the NFL were planted in the early 1990s, when Chase Carey and David Hill were starting Fox Sports. They wanted to find a way to incorporate all the games under one umbrella.

In 2001, Eric Shanks was in Italy creating Sky Italia's sports networks for NewsCorp. Hill would make frequent trips there to check in, and liked the way La Liga soccer games were covered in whip-around fashion on the radio. So when NewsCorp's Rupert Murdoch bought DirecTV, which had all the "Sunday Ticket" games, that provided the inventory for Red Zone Channel.

"One day, David Hill came into my office and said, 'I've got something for you. We're going to call it the Red Zone,' " recalled James Crittenden, a former Fox Sports producer who's now vice president of sports production at AT&T, parent company of DirecTV. "I said, 'Red Zone? What's that?' He said, 'You'll figure it out.' "

And Crittenden did. He and Siciliano have worked on the show since its inception.

Siciliano starts his Sundays at 5:45 a.m., watches a few segments of NFL Network's "Game Day Morning," then leaves his Hermosa Beach home for Starbucks, where he orders a five-shot Americano and an oatmeal, and touches base with his parents in Virginia. Then, he's off to the studio for makeup and rehearsals on his introduction before the first games kick off.

Soon enough, the action is underway.

"We came along at the right time," he said. "We came along as everyone was getting a smartphone and a tablet, and can't keep focused on just one thing. Every week, I get fans and viewers tweeting at me, saying, 'We need more games. Two games isn't enough. Three games isn't enough.' They need seven, eight, nine, 10, as many games as they can get. That's what we're giving them." 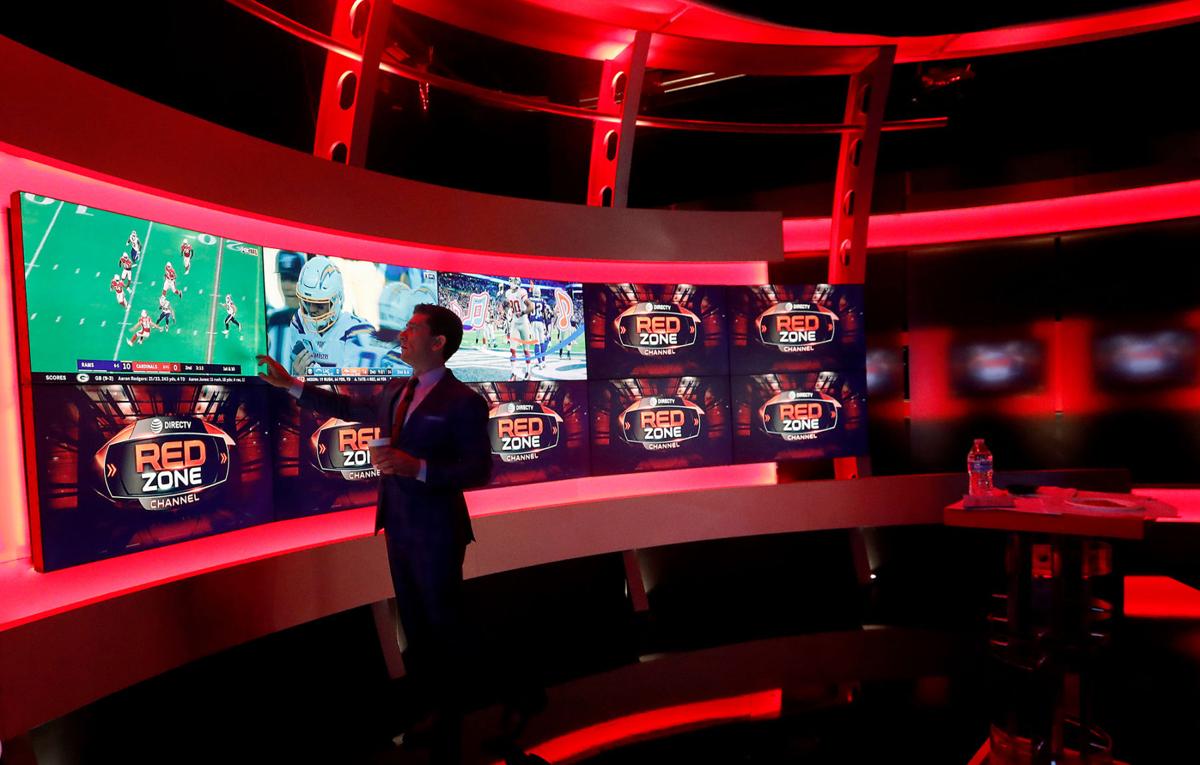 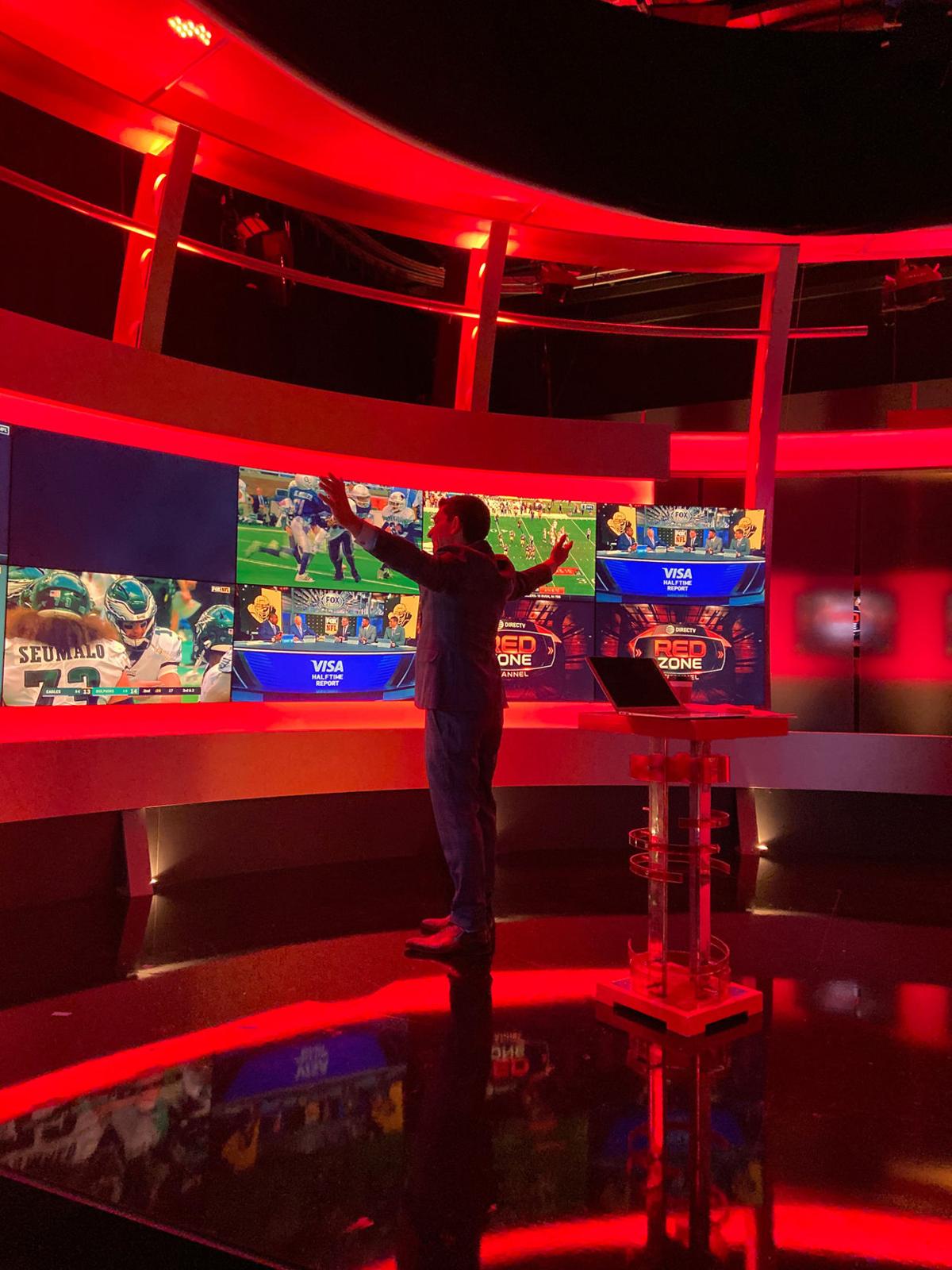