Bengals vs. Titans: Updates and scores from the NFL playoffs 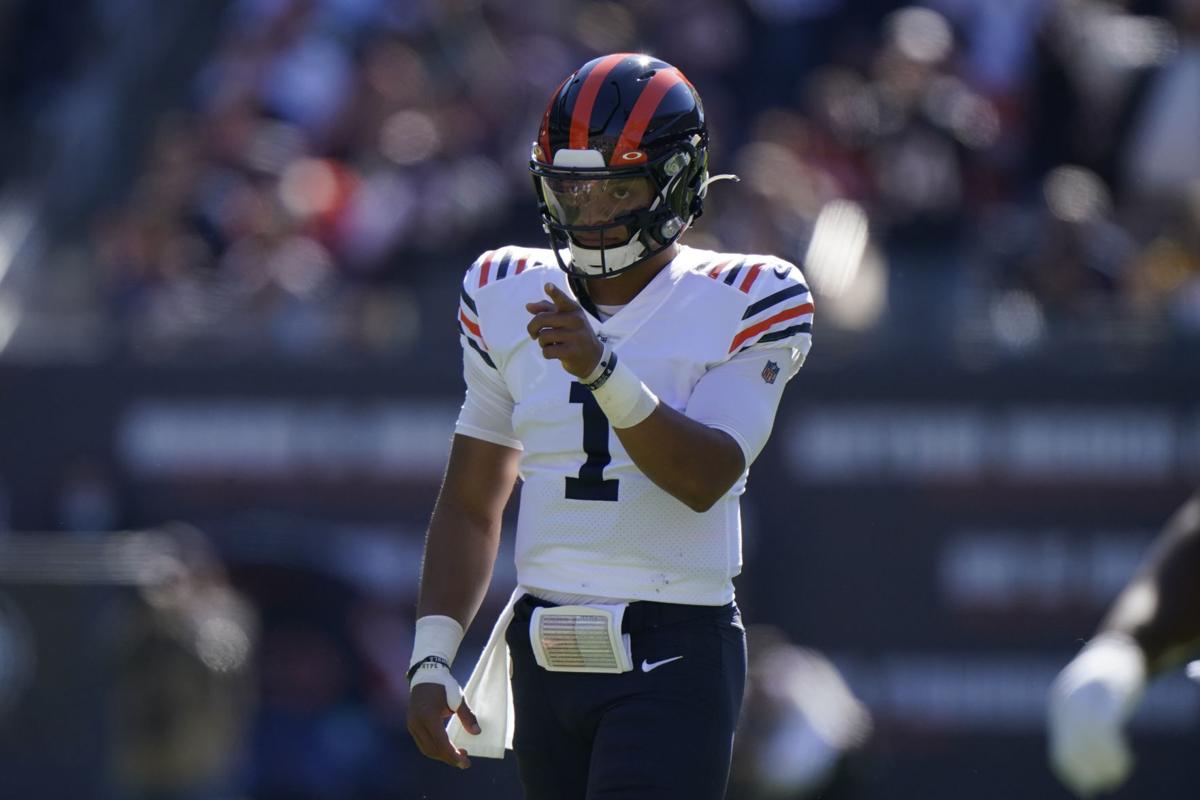 Chicago Bears quarterback Justin Fields points to a teammate during the first half of an NFL football game against the Green Bay Packers Sunday, Oct. 17, 2021, in Chicago. 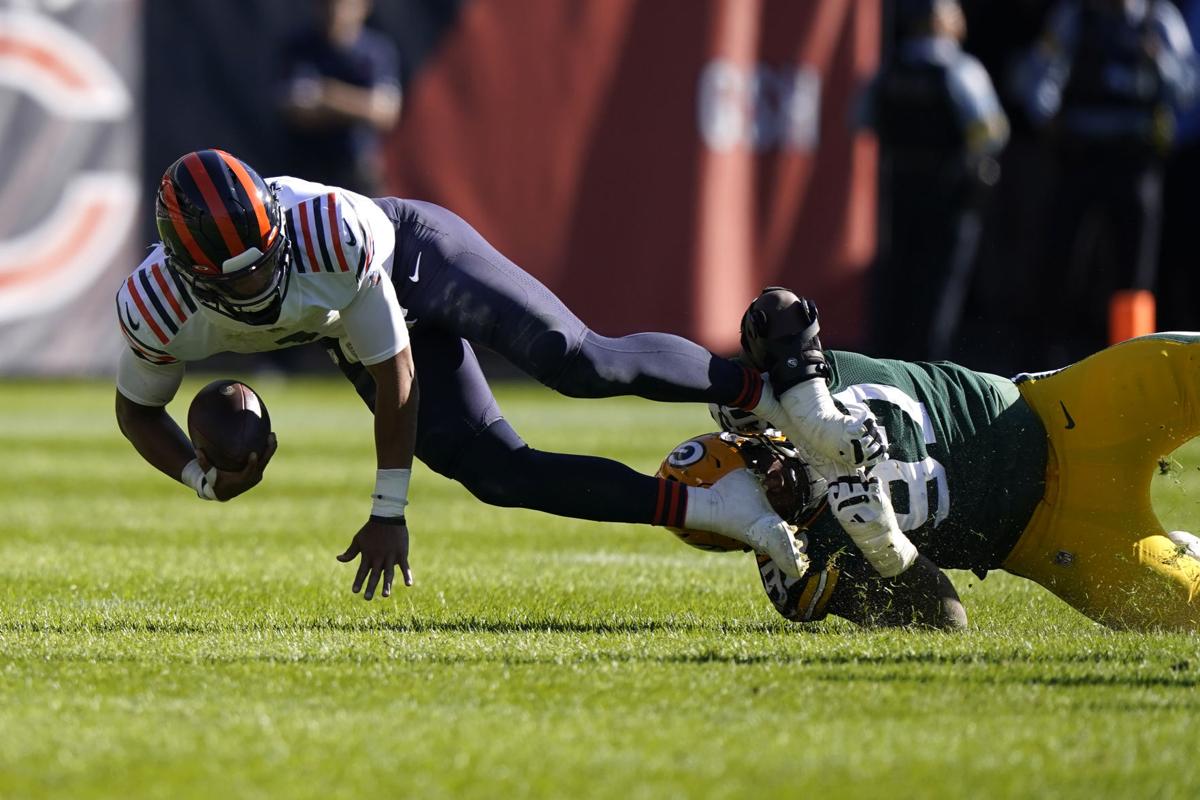 CHICAGO — Justin Fields was terrific on Chicago's first possession. He showed off his arm and legs on another impressive drive for the Bears in the fourth quarter.

Other than that, he looked like just another rookie quarterback.

Fields showed off his promise and his inexperience during a 24-14 loss to Aaron Rodgers and the Green Bay Packers on Sunday. He passed for 174 yards and a touchdown, but he also threw a costly interception in the first quarter.

"I think I should have played better," Fields said. "I didn't play as well as I wanted to."

Fields had directed the Bears (3-3) to two straight wins since he managed just 68 yards passing in his first career start Sept. 26, an ugly 26-6 loss at Cleveland. He threw a 2-yard TD pass to Jesper Horsted on the first of four scoring drives during last weekend's 20-9 victory at Las Vegas.

The matchup with Rodgers — part of the NFL's gold standard when it comes to QBs — provided an opportunity for Fields to measure his progress against the king of the NFC North.

While Rodgers accounted for three touchdowns in Green Bay's fifth straight victory, Fields showed where the next level is for the No. 11 pick in the draft.

"Consistency, that's it," Fields said. "I mean once you come out, get a stop on defense, score first drive, it's 7-0. I mean we got to keep putting the points on them, especially with a quarterback like Aaron. We got to just capitalize on every possession we get."

Chicago forced Green Bay to punt on each of its first two drives. Fields was 3 for 3 for 46 yards on the Bears' first possession, an eight-play, 80-yard drive that Khalil Herbert finished with a 1-yard run for the rookie's first career TD.

After the Packers' second punt, the Bears drove to the Green Bay 47. On third-and-7, it looked as if the Packers might have jumped offside, but there was no flag and Fields was intercepted by Darnell Savage in the end zone.

"When he picked it off, I was confused on why there weren't any flags on the ground," Fields said. "I don't know if the refs just missed that or he didn't go offsides or what."

Bears coach Matt Nagy said the officials felt the player was not in the neutral zone. He said it was a learning lesson for all of them.

"You can look for the flag. It's not easy. It's not easy," Nagy said, "and so, again, I think that Justin, the game that we went through today and where we were offensively ... this is a really good one for him to be able to learn from, and for all of us. That's a moment right there, it's a coachable moment that he's going to grow from."

Chicago stalled on another potential scoring drive late in the first half when it was flagged for delay of game and Fields was sacked by Dean Lowry. Fields tried to call timeout before the play clock ran out, but it wasn't granted before the flag was thrown.

"I don't know what was up with that," Fields said.

Fields marched Chicago to another touchdown in the fourth period, throwing a 5-yard touchdown pass to Darnell Mooney to trim Green Bay's lead to 17-14 with 8:44 left. But Rodgers responded with a 6-yard TD run for the Packers (5-1).

"Unfortunately I just didn't play how I needed to play for us to get the win," Fields said. "Again, I just got to be better."

The 22-year-old Fields set season highs with 16 completions and 27 attempts. He also had six carries for a season-high 43 yards, but it wasn't enough against Rodgers and company.

"I'm really proud of where he's at," Nagy said of his QB. "Again, every day he's going to keep growing. Every single day, in practice, these games, he's going to grow."

Get to know all nine players taken by the Green Bay Packers in the 2021 NFL Draft.

Check out photo galleries from every game of 2021 from the preseason through the end of the regular season and the playoffs.

Green Bay bound: Get to know all 9 players picked by Packers in 2021 NFL Draft

With news of the rift between Aaron Rodgers and the Packers breaking just before the 2021 NFL Draft kicked off, Green Bay fans can be forgiven…

Defining moments: Packers’ 5 most consequential trades since the team’s renaissance began in 1992

Chicago Bears quarterback Justin Fields points to a teammate during the first half of an NFL football game against the Green Bay Packers Sunday, Oct. 17, 2021, in Chicago.