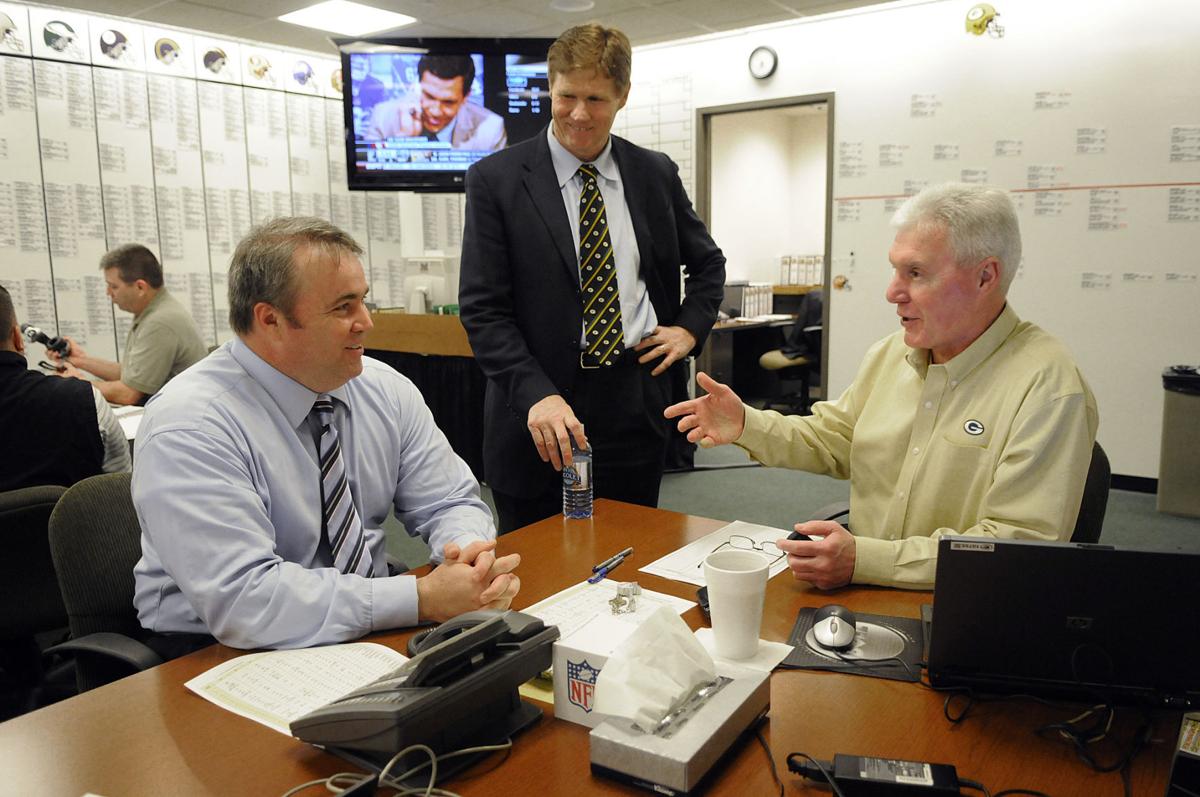 April 22, 2010: Thompson talks to coach Mike McCarthy, left, and Murphy in the war room during the NFL draft at Lambeau Field. 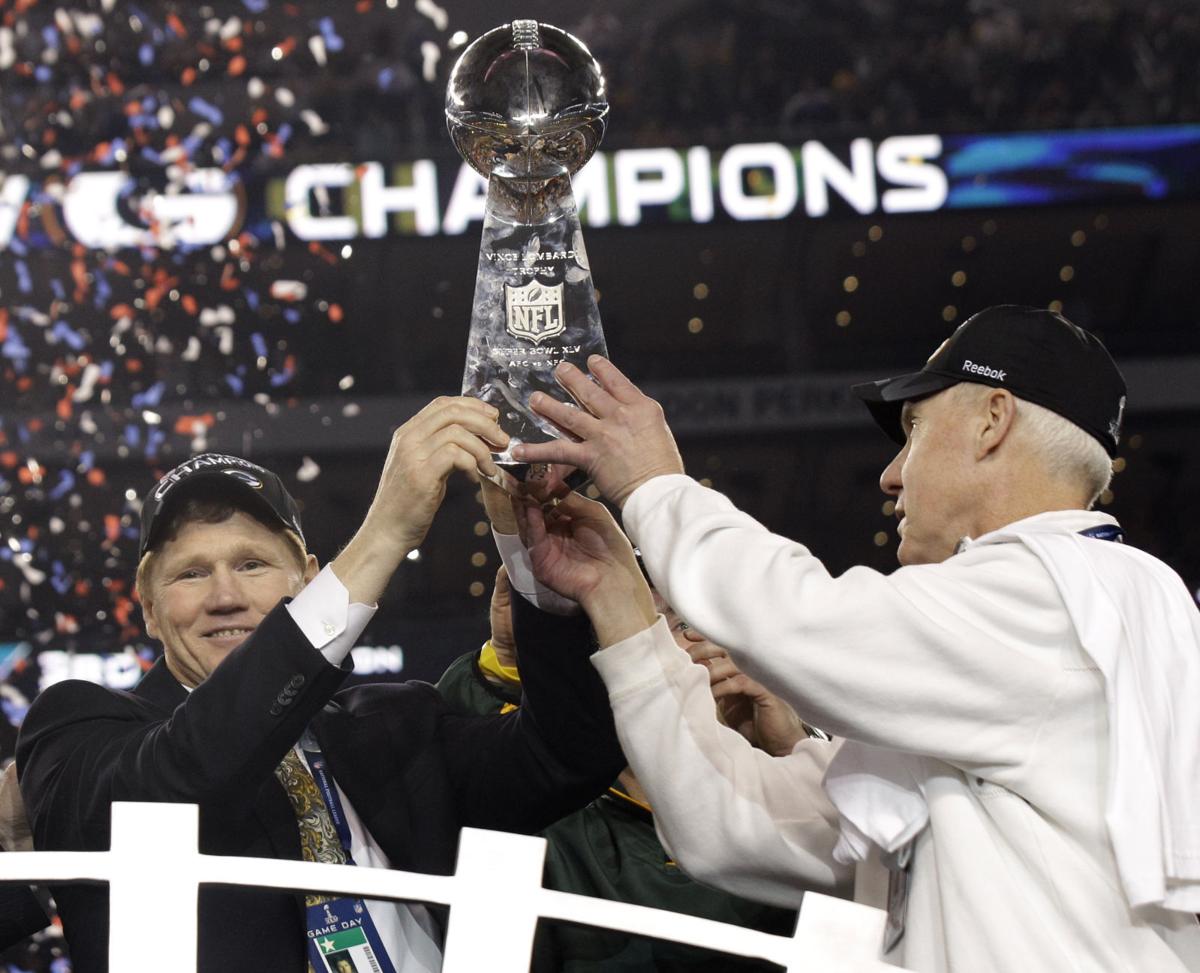 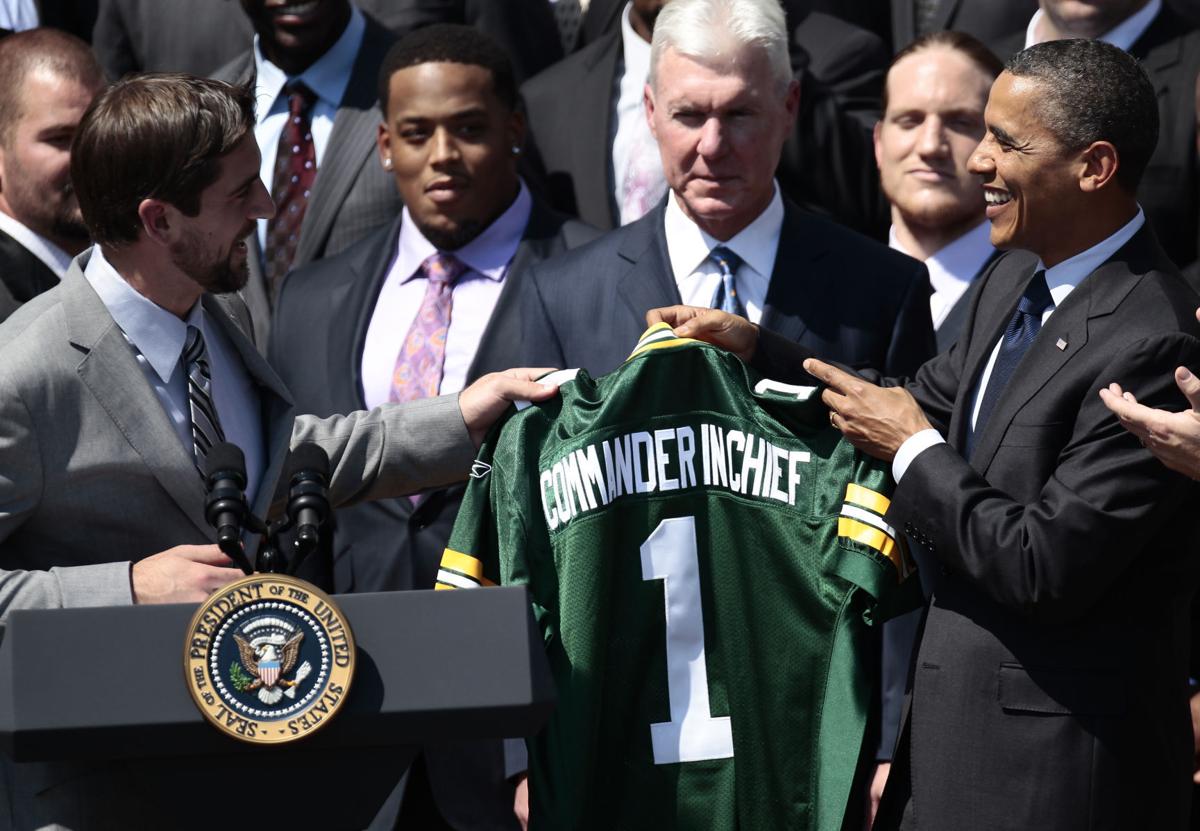 President Barack Obama is presented with a team jersey by quarterback Aaron Rodgers, left, during an Aug. 12, 2011, ceremony honoring the Super Bowl XLV Champion Packers on the South Lawn of the White House. Looking on is team general manager Ted Thompson.

Twice during the 2019 season, Ted Thompson — the man who launched Rodgers’ NFL career by selecting him with the 24th overall pick in the 2005 draft after his disappointing draft-day tumble — had visited Lambeau Field, checking in on Rodgers, the team, and general manager Brian Gutekunst, one of Thompson’s protégés.

Thompson, the architect of the Green Bay Packers’ Super Bowl XLV championship team, had spent 13 years as the team’s GM (2005 through 2017) before transitioning in January 2018 from the team’s general manager to an advisory role and quasi-retirement. He’d been inducted into the Packers Hall of Fame in May 2019, and had announced a few days after the ceremony he was suffering from what he termed an “autonomic disorder.” Intensely private, Thompson did not share any details of his condition, when he began experiencing symptoms or how the disorder specifically impacted him and his work near the end of his tenure as GM.

But both times Rodgers saw Thompson thereafter, he left their conversations wondering if he had delivered his last goodbye to the man who’d not only drafted him but stood by him during the summer of 2008 when Thompson traded away iconic quarterback Brett Favre to make way for Rodgers to become the starter.

Rodgers, now in his 13th year as the Packers’ starting quarterback and a future Pro Football Hall of Famer, will lead the team into that game, one of a host of key players who remain on the Green Bay roster after being acquired by Thompson.

“I knew he wasn’t doing great,” Rodgers said in a phone interview late Thursday afternoon. “That was really hard, to see him like that — for sure.

“I still got to spend a couple lunch times with him, and I hugged him, and I told him I loved him. I wasn’t sure either time that I saw him last year if it was going to be the last time that I saw him. So, I wanted to make sure I got a chance to tell him how much I appreciated him. I really wanted to let him know how much I appreciated him and how thankful I was for him taking me, and believing in me, and giving me an opportunity.”

“He's had a tremendous impact,” LaFleur said. “Not only on people in this building — obviously ‘Gutey’ and a lot of our personnel people — but people in other departments as well. His impact is still felt to this day when you look at our roster, but I think he's had a tremendous impact amongst many people across the league when you look at all the other GMs that have learned under him. Certainly, we're sitting here with heavy hearts today.”

Team president/CEO Mark Murphy later announced that, to honor Thompson, the team will install his name on the Lambeau Field façade before next season — something Murphy had recently shared with the Thompson family.

“I feel so blessed that I had the opportunity to work with him,” Murphy said. “Just a humble man, but so smart. We all owe a debt of gratitude to him. Look at his stamp; it’s on our team now. … Obviously, he was willing to make difficult decisions. He knew that was part of his job. (But) he was always looking for the good in people. I think we all just learned so much being around him.”

Added Gutekunst, who rose from college scout to being one of Thompson’s top personnel lieutenants before taking over for him: “This is a very competitive business, and everybody wants to win badly. But his ethics were at the top of the charts. There was no compromise there. He wasn’t one that had a very big circle that he let people into. Over time, I was lucky enough to be one of those guys. Selfishly, I wish he was still around because what we’re doing right now with this football team, I think he’d really enjoy.”

Thompson, who played 10 NFL seasons (1975 through 1984) as a linebacker and special teams standout for the Houston Oilers, was working in the financial sector in Houston when Packers general manager Ron Wolf hired him in 1992. One of the first tasks Wolf gave Thompson was to evaluate film of the Atlanta Falcons’ wild, third-string quarterback — Favre. Days later, Wolf traded a first-round pick for Favre, the pivotal moment that fueled the downtrodden franchise’s renaissance, set the stage for the 1996 team’s Super Bowl XXXI championship and eventually led to Wolf being inducted into the Pro Football Hall of Fame.

Thompson worked for the Packers until 2000, when he left to join ex-Packers head coach Mike Holmgren in Seattle, where Thompson was in charge of the Seahawks’ scouting department while Holmgren held the dual role of coach and GM. With Thompson’s keen scouting acumen, the Seahawks built a roster that led to a berth in Super Bowl XL.

Thompson returned to Green Bay in 2005, after then-head coach/GM Mike Sherman was stripped of his personnel duties by then-team president/CEO Bob Harlan, who had hired Wolf to resurrect the franchise in 1992. With his very first draft pick as GM, he took Rodgers, who is expected to win his third NFL MVP and has the Packers one victory away from a Super Bowl return a decade after their last appearance.

Even Rodgers acknowledged that Thompson’s reserved, humble approach meant many players never got to know him well. A scout at heart — even while running one of the league’s signature franchises — Thompson traveled frequently and rarely addressed the team. Believing the locker room was the players’ sanctuary, he seldom ventured inside, other than to deliver postgame congratulations.

“Knowing Ted for so long, he was always such a mystery almost. He loved scouting, so he was gone doing that a good amount of time,” Rodgers recalled. “We saw him at the beginning of training camp every year, he would give us a few words, but there wasn’t a ton of dialogue over the years. But I always appreciated the handshakes after the game and when we would share words.

“He was a really, really humble man, and I definitely appreciated that humility.”

Watch now: Ty Pelton-Byce talks about his time playing for the Badgers

Watch now: Ty Pelton-Byce talks about his time playing for the Badgers

With Kevin King questionable, Tramon Williams’ return to Packers may turn into more than just a feel-good story

Exclusive: Aaron Rodgers — in his own words — on his ‘journey of self-actualization,’ why he’s kinder now, and why he’s not worried about how many more Super Bowl chances he has left

Packers quarterback Aaron Rodgers, who again has his team a win away from the Super Bowl, explains how he’s a different man than he was when he led Green Bay to the title after the 2010 season.

Get the latest postgame updates after Aaron Rodgers and the Packers fell to Tom Brady and the Buccaneers 31-26 in the NFC Championship Game at Lambeau Field.

Corey Linsley grapples with finality of playoff loss, uncertain future as Packers clean out their lockers

“I feel like I put out some good film and did the best that I could this year," Packers center Corey Linsley said. "Hopefully if the Packers don’t re-sign me, hopefully another team will."

A buzz surrounded and filled Lambeau Field, but the Packers fall to the Tampa Bay Buccaneers in Sunday’s NFC championship game.

April 22, 2010: Thompson talks to coach Mike McCarthy, left, and Murphy in the war room during the NFL draft at Lambeau Field.

President Barack Obama is presented with a team jersey by quarterback Aaron Rodgers, left, during an Aug. 12, 2011, ceremony honoring the Super Bowl XLV Champion Packers on the South Lawn of the White House. Looking on is team general manager Ted Thompson.