LIVE: Family of victim speaks after Buffalo shooting that killed 10 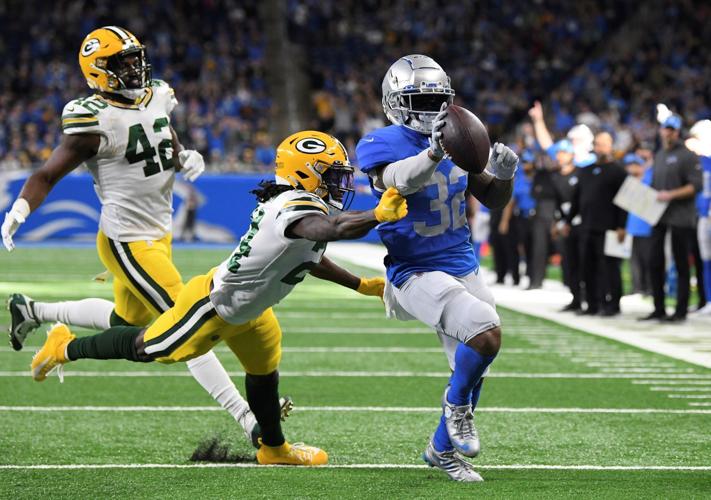 Lions running back D'Andre Swift avoids Packers cornerback Isaac Yiadom on his way to a 14-yard touchdown run during the fourth quarter Sunday in Detroit. 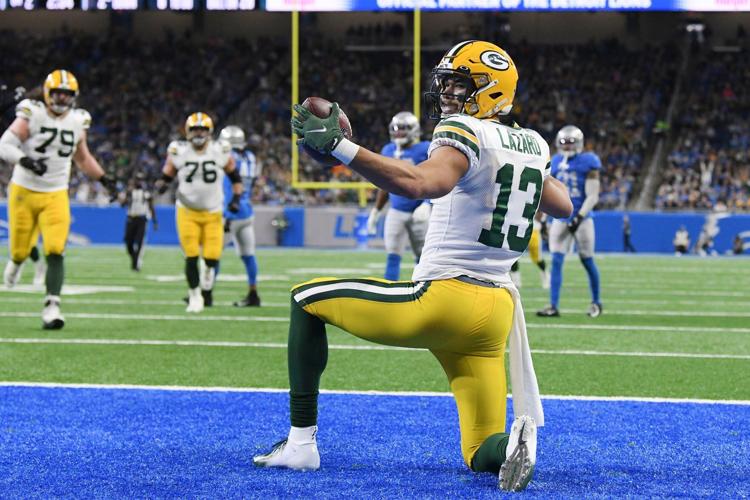 Packers wide receiver Allen Lazard reacts after catching a 29-yard touchdown pass during the first half.

Everything — except the final score, of course — seemed to work out just fine for the Green Bay Packers in their don’t-call-it-meaningless (but still meaningless) regular-season finale against the Detroit Lions on Sunday at Ford Field.

The No. 1 offense — led by quarterback Aaron Rodgers and wide receiver Davante Adams, who had insisted on playing in the game to keep their offensive momentum going — scored two touchdowns in four possessions, accomplishing their goal.

Adams got the 22 yards (and more) he needed to break Jordy Nelson’s 2014 franchise single-season record for most receiving yards, surpassing Nelson on a 13-yard catch before the end of the first quarter and finishing with six receptions for 55 yards to end the season with 123 receptions for 1,553 yards and 11 touchdowns.

Left tackle David Bakhtiari, making his season debut 374 days after suffering a torn ACL in his left knee, played 27 snaps before calling it a day, giving him some work before the playoffs begin. Rookie center Josh Myers, out since suffering a knee injury of his own on Oct. 17 at Chicago, played 32 snaps as well.

And, most importantly, after getting their wish to suit up, Rodgers and Adams avoided injury, while two other players who’ll have vital roles in any Packers playoff run — inside linebacker De’Vondre Campbell (elbow) and running back Aaron Jones (knee) — were inactive and able to nurse their injuries so they can be 100% for the NFC Divisional round game at Lambeau Field on Jan. 22 or 23.

Sure, 2020 first-round draft pick Jordan Love struggled when he took over at quarterback, which wasn’t ideal. But that’s a future issue, not a present one.

As for the here and now, the defense didn’t play particularly well, so if there was anything to be annoyed with, it might’ve been on that side of the ball.

But for a team that had the NFC’s No. 1 seed — and the lone conference first-round playoff bye that came with it — already secured, Sunday’s 37-30 loss still checked most of the let’s-avoid-catastrophe boxes the Packers surely had in the back of their minds.

That wasn’t quite enough for Packers coach Matt LaFleur, though.

“I might have a better perspective tomorrow,” LaFleur replied when asked if his team had gotten what it wanted out of the Week 18 finale. “Right now, I think we’re all competitors and we don’t like losing. It doesn’t feel like any other game — when you lose, you’re pissed off. (But) I am happy in the fact that we got out fairly healthy.”

LaFleur seemed especially bothered by a defensive performance that saw the Lions (3-13-1) rack up 404 net yards of offense, score touchdowns on trick plays not once but twice, reclaim the lead with under 2 minutes to play and add a field goal in the final minute to seal the victory.

LaFleur’s irritation notwithstanding, even falling to 13-4 wasn’t enough to put a damper on Rodgers’ or Adams’ happiness with where the Packers stand entering postseason play.

“The win obviously would be nice, but the most important thing was to get out there (healthy),” said Rodgers, who completed 14 of 18 passes for 138 yards with two touchdowns, no interceptions and one sack (135.6 passer rating) and likely locking up his fourth NFL MVP award. “We talked about momentum, and that was important, but I really wanted to get out there with Dave and Josh. That was my main focus.

“Obviously (I) wanted to get Davante his record, but get some rhythm within the offense, get some rhythm with those two guys especially. We’ve got to figure out what our best five (offensive linemen) is and what our healthiest five is. … I like where we’re at offensively up front and I think that’s what today was most about.”

Grading the Packers: Defense marked down for getting tricked twice; coaches lauded for balancing rest, rust

Added Adams: “There’s never a game that doesn’t mean anything in this league, especially (with) where we’re headed right now. We just got to understand and embrace every moment and get something out of every opportunity — every game, every play — because you’re playing for the name on the front and the name on the back. It’s really about pride, if nothing else. I was talking to the defense and saying the same thing to them. Like, ‘Yeah, we lose this game, it’s not going to matter — but it will.’ … We want to get something out of every game because they all matter.”

The Packers took the opening kickoff and drove 74 yards in 13 plays, ending the drive on a 1-yard Rodgers-to-Allen Lazard touchdown pass and a 7-0 lead. Green Bay’s next two series ended in a punt and a failed fourth-down attempt, allowing the Lions to take a 14-7 lead on a Tom Kennedy-to-Kalif Raymond touchdown on a trick play followed by a more traditional 2-yard Amon-Ra St. Brown touchdown catch from Jared Goff.

But the Packers offense got another touchdown on its final possession as a full unit, with Rodgers and Lazard connecting again on a 29-yarder. Kicker Mason Crosby’s extra point was wide right, leaving the Lions ahead 14-13.

“Obviously we wish we would’ve came away with the ‘W,’” said Lazard, who caught five passes for 75 yards overall. “I think the biggest thing was for us to go out there and be able to play in rhythm. I think we did a great job in the first half of coming out there with the starters and being able to kind of put some points up on the board. It’s going to be another two weeks before we play again. If we didn’t play today, it would’ve been three weeks. And I don’t think anyone wants to do that.”

Love took over for Rodgers for the kneel-down at the end of the first half, and the Packers rallied from a 24-13 deficit to take a 30-27 lead with 4:49 to play when Josiah Deguara took a tight end screen from Love and went 62 yards for a touchdown. But the defense allowed the Lions to answer with a D’Andre Swift touchdown with 1:54 to go, and Love threw interceptions on the Packers’ final two possessions, allowing the Lions to end the season with their third victory.

“I was proud of our guys. We went out and finished on a high note,” Lions first-year head coach Dan Campbell said. “In some regards, I did think we played some of our best football. There’s still a lot that we always want to be able to correct, and it will never be perfect. But they came out and competed and earned that win. I was proud of them.”

LaFleur, meanwhile, was clearly irritated by the defense’s performance, especially with the way Campbell’s trick plays worked. Asked about those plays, LaFleur replied, forcefully, “Defense, football in general, comes down to discipline, and people owning their roles. And when you aren’t disciplined or you go outside the scheme, bad stuff happens. We cannot have that. We need all 11 doing their damn job. And if they don’t, stuff like that happens.”

What happens in the playoffs, of course, is all that matters. The Packers, as the No. 1 seed, will face the NFC’s lowest-remaining seed once next weekend’s wild card weekend games are over. And with Rodgers and Adams healthy, Bakhtiari and Myers back in the mix, and cornerback Jaire Alexander, wide receiver Randall Cobb and others poised to return from their injuries, the Packers have to like their chances.

Even if LaFleur was perturbed in the moment.

“No matter who’s out there, the expectations don’t change. We’re about winning with the Green Bay Packers. We’ll never just celebrate the effort,” LaFleur said. “We’ve got to win, and we’ll never accept losing. That’s just the mindset, the mentality.

“We’ll take this week to stay sharp mentally and hopefully heal up, rest up and just keep our mind on ball. Because we’re at the point in the season where you get one crack at it, and we’ve got to make every play count. We need everybody’s best effort every day, we know nothing’s going to be given to you, you have to earn everything you get. We’ll lick our wounds from this one and move forward.”

The lawsuit says the defendants “squandered" more than $20 million in money from the Temporary Assistance for Needy Families anti-poverty program.

It marks the fourth straight year the Packers have started on the road, including 2020, when they beat the Vikings 43-34 at U.S. Bank Stadium — albeit without any fans in the stands because of the COVID-19 pandemic.

Mike McCarthy to return to Lambeau to face Packers on Nov. 13

The NFL announced when Mike McCarthy will return to Lambeau Field next season to lead the Cowboys against his former team in a meeting of Super Bowl hopefuls.

Observations on the Packers’ 11 draft picks from rookie minicamp

“It’s always exciting when you get these guys in the building. It’s like getting a bunch of new toys,” said coach Matt LaFleur, who limited the practice work to drills and 7-on-7 periods, eschewing any 11-on-11 work.

How will Aaron Rodgers connect with his new rookie wideouts? They’re eager to find out

“I know he’s going to be tough on me — and that’s exactly what I want,” Christian Watson said after the Packers picked him in the second round of last week's NFL draft.

Lions running back D'Andre Swift avoids Packers cornerback Isaac Yiadom on his way to a 14-yard touchdown run during the fourth quarter Sunday in Detroit.

Packers wide receiver Allen Lazard reacts after catching a 29-yard touchdown pass during the first half.