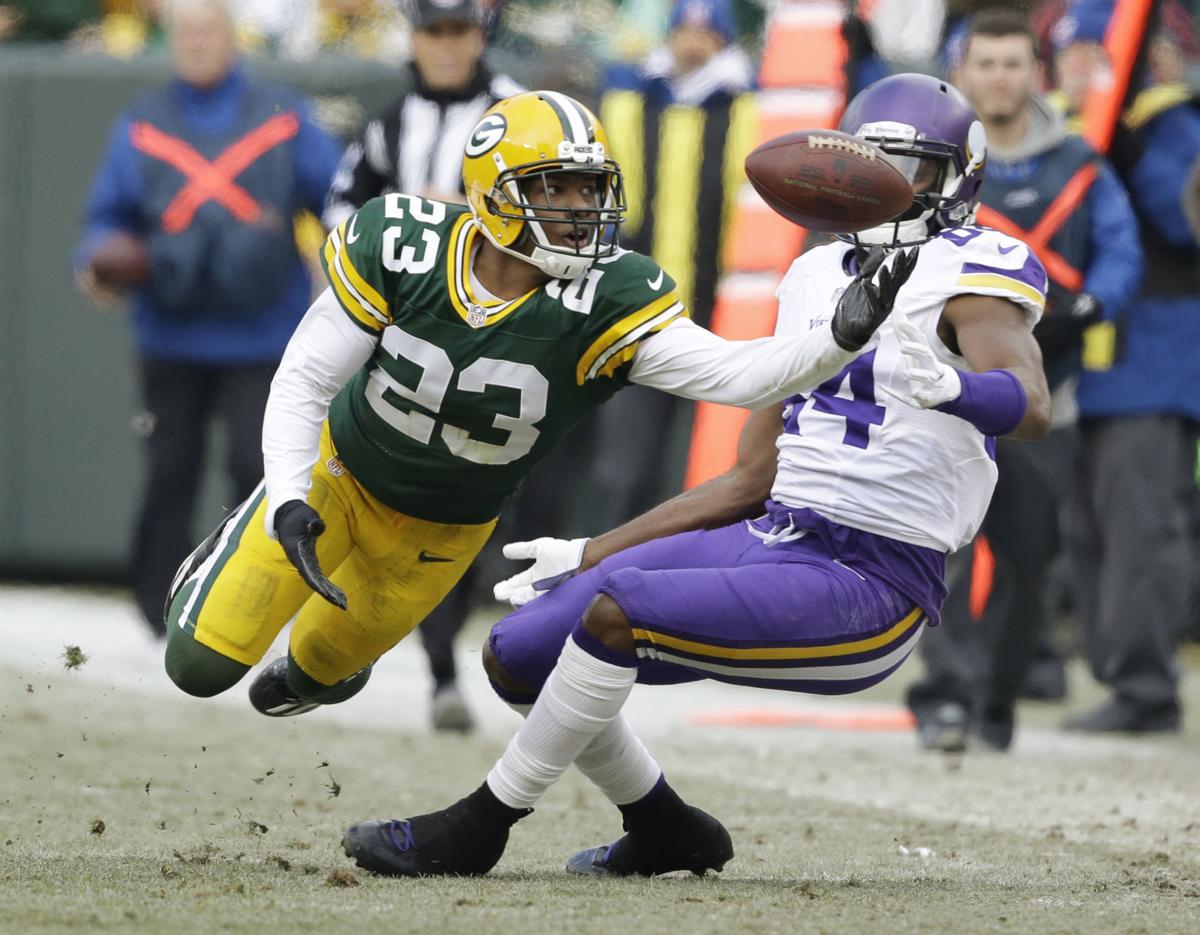 Green Bay Packers cornerback Damarious Randall, here breaking up a pass intended for Minnesota Vikings receiver Cordarrelle Patterson last season, figures to play a key role on a secondary that could be formidable this season. 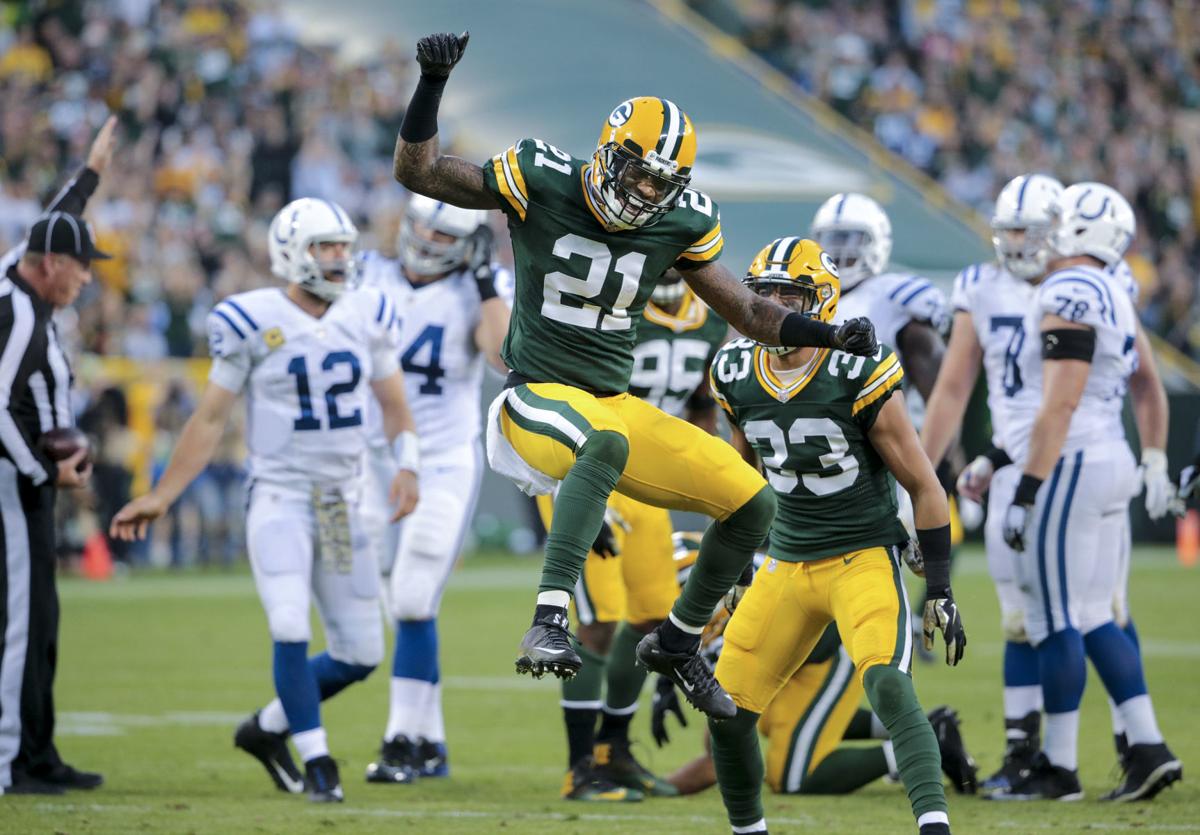 Green Bay Packers free safety Ha Ha Clinton-Dix celebrates a sack against the Indianapolis Colts in 2016. Clinton-Dix missed the voluntary portion of organized team activities this month, but will return for mandatory minicamp that starts next Tuesday.

GREEN BAY — Joe Whitt has a very simple rule when it comes to his guys’ playing time. The best players, the Green Bay Packers cornerbacks coach has long said, will play. The others, he says, will watch.

Figuring out who’s who during training camp should be an interesting pursuit, for Whitt, defensive coordinator Dom Capers and head coach Mike McCarthy.

Atop the depth chart are veteran Davon House, back after two years in Jacksonville; 2015 top picks Damarious Randall and Quinten Rollins, looking to rebound from inconsistent and injury-filled sophomore seasons; third-year man LaDarius Gunter, who was the team’s highest-graded cover man last season following Sam Shields’ season-ending concussion in Week 1; and rookie Kevin King, the No. 33 overall pick in April who could be an opening-day starter if he overcomes the time he missed during the offseason program while classes were still in session at the University of Washington.

“I’m excited about what we can be. Now, we need to get there,” Whitt said. “I knew going into last year there were going to be some growing pains that we’d have to work through. I didn’t think it was going to be as hard as it was.

“But I’m expecting much better. I’ve seen good practices before and good groups and this group here had those type of practices (throughout the offseason).”

At safety, meanwhile, things are more cut-and-dried. Ascending Ha Ha Clinton-Dix, coming off the first of what figures to be multiple Pro Bowl selections, will line up alongside veteran Morgan Burnett, who is expected to play a hybrid linebacker role in some situations. That’s the plan for rookie second-round pick Josh Jones, who figures to see snaps in sub packages, along with hard-hitting second-year safety Kentrell Brice.

“Morgan and Ha, I’m telling you, those are two studs right there. I’m talking about both on and off the field,” safeties coach Darren Perry said. “Some of the foolishness and some of the things that don’t correlate and help you win ballgames, they don’t really partake in. When the guys come here, it’s pretty much all business.”

Here’s a closer look at the defensive backs as the Packers prepare for training camp, which kicks off with its first practice on Thursday morning:

Will Damarious Randall prove why he was a first-round pick?

Randall, who battled groin, hamstring, knee and shoulder injuries last season and missed five games after surgery for the groin injury, was talking confidently throughout the offseason about his ability and vowed to show all doubters just what he is capable of.

Based on how he was used throughout the offseason, Randall will be doing so from the slot position, or as the coaches call it, the “star.” That means he likely won’t be one of the two outside starters but will have a chance to play nearly 80 percent of the snaps if he is indeed the “star” when the season opens Sept. 10 against Seattle.

“There’s a lot of variables that we’re going to have to see as we go through training camp,” said defensive coordinator Dom Capers, pointing out how top pick Kevin King missed all of organized team activity practices while classes at the University of Washington were still in session. “But we’ve always felt like the more guys you have that can play multiple positions, you know you’re going to need it as you go through the course of a season.’’

There was a distinct feeling around the Packers entering last season that Clinton-Dix, their 2014 first-round pick, was on the cusp of a breakout season. That turned out to be exactly what happened.

He led the NFL in interceptions by a safety (five) and did it while spending much of the year having to compensate for the secondary’s coverage issues at cornerback. If that group improves the way cornerbacks coach Joe Whitt expects it to, Clinton-Dix should have more freedom to make plays rather than preventing his compadres from allowing too many.

“He does have some unique ability,” safeties coach Darren Perry said. “But it’s still early (in his career). I know he’s played a lot of snaps for us in his short career (that) you’d think he’s been here a little longer. But I think Ha Ha can be as good as he wants to be. I really do believe that.”

While safeties coach Darren Perry and the rest of the coaches cautioned that the workouts were just in shorts and helmets, it was hard for any observer – coaches included – not to be intrigued and impressed by Jones, the rookie second-round pick from North Carolina State whom the team sees as a hybrid safety/linebacker because his rare combination of speed (4.41-second 40-yard dash) and size (6-foot-2, 220 pounds).

How quickly he gets up to speed with the scheme and can play without thinking will dictate how much time he sees on defense.

“I’ve never been a good evaluator of guys in shorts,” Perry said. “He (was) able to make some splash plays and do some things that catch your eye —he’s a talented individual —but we’re asking him to do a lot. And I told him to just be patient. But we like him and like what he’s done to this point.”

Who plays, who doesn’t at corner?

When cornerbacks coach Joe Whitt looked at all his options, he couldn’t help himself. Suddenly, he was excitedly talking about this group in the same breath as some of the Charles Woodson-led units from 2006 through 2012. For instance, LaDarius Gunter, who graded out as the team’s best cover man last year and matched up with opposing teams’ No. 1 receivers down the stretch, may not even be one of the six defensive backs on the field for the top dime unit on opening day.

“I’m not going to get ahead of myself, but if we play to our potential, we have a chance to be as good as any group that we might’ve had here,” Whitt said. “

Who has the edge in the NL Wildcard race?

What to expect with Justin Fields at the helm

What to expect with Justin Fields at the helm

Grading the Packers: Offense takes care of business but defense still a concern after an uneven showing

Jim Polzin grades the Green Bay Packers’ performance Monday night in their 35-17 win over the Detroit Lions at Lambeau Field.

The tight end drafted in 2019 caught only 12 passes for 114 yards during his short tenure.

Jim Polzin: Packers continue their NFC North dominance by pummeling the Lions in the second half

“We always emphasize the division,” Packers coach Matt LaFleur said last week. “I think that’s always the starting point is your division. I mean those games almost count as two because while you’re getting one leg up, somebody’s going backwards.”

At halftime Monday night, the former general manager's name was unveiled on the facade of the stadium in the northeast corner.

So far in the third-year coach's tenure, Green Bay has yet to lose back-to-back games.

Green Bay Packers cornerback Damarious Randall, here breaking up a pass intended for Minnesota Vikings receiver Cordarrelle Patterson last season, figures to play a key role on a secondary that could be formidable this season.

Green Bay Packers free safety Ha Ha Clinton-Dix celebrates a sack against the Indianapolis Colts in 2016. Clinton-Dix missed the voluntary portion of organized team activities this month, but will return for mandatory minicamp that starts next Tuesday.