GREEN BAY — Aaron Rodgers acknowledged the obvious Friday afternoon: That after 15 seasons, two NFL MVP awards, nine playoff berths and a Super Bowl XLV title, his Pro Football Hall of Fame career most likely will not end the way it began: With the Green Bay Packers.

But it was the way the Packers star quarterback said it — in his final answer of a nearly 40-minute conference call with Wisconsin reporters, one that focused on but was not exclusively about general manager Brian Gutekunst’s and head coach Matt LaFleur’s decision to trade up and pick Love in the first round of last month’s NFL Draft — that was noticeable: With a tinge of resignation, and clear disappointment that despite all the times he said he wanted to play into his 40s and beyond his current contract, that the team’s brain trust isn’t planning for it to end that way.

It won’t end now, given the salary-cap ramifications of moving on from Rodgers in the short term and the not-quite-NFL-ready Love’s need to develop, and might not happen until 2022 or later. But the 36-year-old Rodgers said it best: It feels like it’ll be harder for him to make his desire a reality.

Having said earlier in the call that his first emotion on draft night had been “surprise” and that he had been not “thrilled by the pick, necessarily,” Rodgers was asked in the final query of the Q&A session whether his disappointment had been rooted in the team’s decision to pick his expected successor at quarterback, or in Gutekunst and LaFleur opting not to add a weapon who could help the Packers in 2020 after they came within one victory of a berth in Super Bowl LIV last season.

“I think it was more the surprise of the pick, based on my own feelings of wanting to play into my 40s, and really the realization that it does change the controllables a little bit,” Rodgers replied. “Because as much as I feel confident in my abilities and what I can accomplish and what we can accomplish, there are some new factors that are out of my control. And so my sincere desire to start and finish with the same organization, just as it has with many other players over the years, may not be a reality at this point.

“And as much as I understand the organization’s future outlook and wanting to make sure they’re thinking about the team now and down the line — and I respect that — at the same time, I still believe in myself and have a strong desire to play into my 40s. And I’m just not sure how that all works together at this point.”

Rodgers, who signed a four-year, $134 million extension in August 2018 when he had two years remaining on his existing deal, is still under contract for four more years. The Packers could move on from him after the 2020 season and realize a small salary-cap savings of $4.76 million even with $31.556 million in dead money left from Rodgers’ contract. If they moved on from him — by trading or cutting him — after the 2021 season, they’d save $22.648 million in salary-cap space while counting $17.204 million in dead money.

Of course, Rodgers could make it much harder for the Packers to go another direction by staying healthy and playing well. Unlike Brett Favre, behind whom Rodgers sat for three seasons after being the No. 24 overall pick in the 2005 NFL Draft, Rodgers has never once publicly ruminated about retirement. Favre, meanwhile, made those contemplations an annual rite of spring and in March 2008, did in fact announce his retirement, giving the Packers the opening their needed to move on to Rodgers.

Favre admitted during an ESPN Wisconsin interview last week that telling then-coach Mike McCarthy and then-GM Ted Thompson that he was retiring so soon after the season ended was a mistake.

“If I could go back and do things differently, I certainly would,” Favre said. “I would much rather have not said anything and just bought a little time. Of course, everyone knew by that time I couldn’t make up my mind two months removed from the season anyway. We had been down that road before. But I knew, and I have no ill feelings about this, but I knew they were sort of ready to go in a different direction. And at some point you’ve got to make that transition, and Ted felt like that was probably the best time. It turned out to be a great move. And I’d tell Ted that to his face right now.

“It was a great move drafting Aaron Rodgers, and it was a great time to make that transition. And it’s worked out well for them. The jury is out whether or not the same will happen with Jordan and his transition. We will see.”

Favre, of course, unretired a few months later, wound up being traded to the New York Jets that summer and finished his career by playing two seasons with the rival Minnesota Vikings.

“I think what it does is just reinforce kind of the adage that you can only control what you can control,” Rodgers said. “It’s always been a mantra for myself, but I think with any great athlete there’s things that are just out of our control. That obviously is something that’s very important to me, but I think is definitely telling at this point that is truly something that’s out of my control. What I can control is how I play and making that decision at some point a very hard one. You know, if I were to retire in the organization’s timetable, then it’s an easy decision. But if there comes a time where I feel like I can still play at a high level and my body feels great, you know, then there’s other guys that have gone on and played elsewhere.”

Speaking in a conference call shortly after Rodgers’ session wrapped up, LaFleur acknowledged that Rodgers’ feelings were natural.

“I totally understand where he’s coming from,” LaFleur said. “I think he’s very motivated, and he doesn’t need external motivation. He’s one of the most competitive people I’ve ever been around. And you can see that competitiveness every time we step out on that field. So I don’t think it’s going to drive him any more than if we would’ve drafted somebody else. I just think that’s who he is, that’s how he’s wired, that’s why he’s achieved the things that he’s done throughout his career.”

Rodgers, meanwhile, said he plans to do with Love what he’s done with his previous backups: Be a good mentor and teammate. Rodgers went out of his way to point out that it’s not Love’s fault that he’s been thrust into this scenario – just as it wasn’t Rodgers’ fault 15 years ago when he was drafted and sat behind Favre, who was less than thrilled himself at the time.

“I feel great about those relationships that I developed over the years. Many of them are still really close friends,” Rodgers said. “I consider Matt Flynn a very close friend. I still have great contact with a lot of guys I played with over the years (such as) Deshone (Kizer) and Manny (Wilkins). Tim (Boyle) and I are really close. Brett Hundley and I keep in touch all the time. Scotty Tolzien and I talk from time to time.

“I’ve had great relationships over the years with those guys, and I’d expect that same type of relationship with Jordan. Again, he didn’t get asked to be drafted by the Packers. He’s not to blame at all. He’s just coming in excited about his opportunity.

“We had a great conversation the day after the draft and I’m excited to work with him. He seems like a really good kid with a good head on his shoulders. Similar story (to mine), not heavily recruited out of college, kind of made his way at Utah State. And we’ve had some great conversations.”

More inside: Rodgers temperament with teammates is compared to that of Michael Jordan, Page B4.

"We had a great conversation the day after the draft and I’m excited to work with him. He seems like a really good kid with a good head on his shoulders."

The NFL plans to play the Black national anthem before Week 1 games. Hear the anthem here.

Additionally, the league is working collaboratively with players to recognize victims of systemic racism throughout the season.

GREEN BAY — The message surely came as no surprise to Green Bay Packers season ticketholders. Nevertheless, the reality of the COVID-19 pandem…

UW's recruiting class among best in the nation

Paul Chryst insists that he and his coaching staff’s approach to recruiting hasn’t changed.

How much Willie Tyler ends up playing this fall for one of the most storied college football programs in the nation remains to be seen.

Packers: For once, former WR Nelson content to be on sidelines 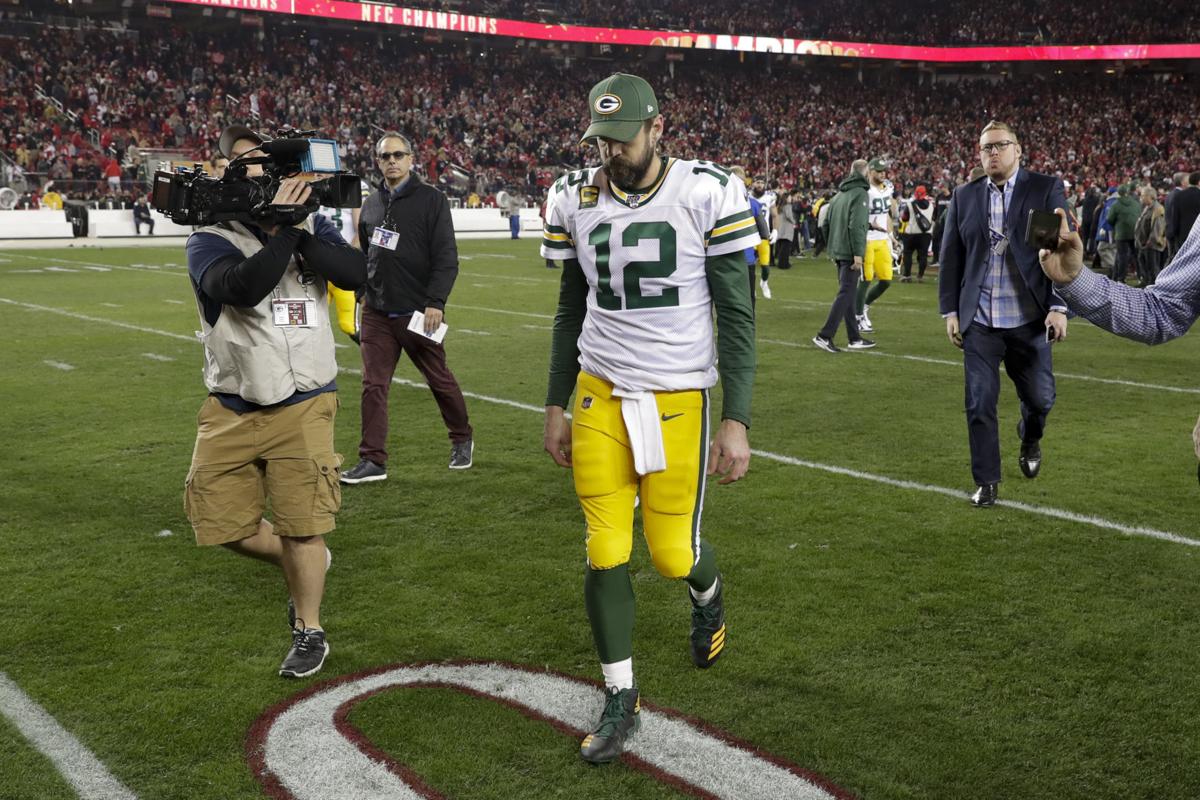 Green Bay Packers quarterback Aaron Rodgers leaves the field after their loss against the San Francisco 49ers in the NFC Championship game Jan. 19 in Santa Clara, Calif. Rodgers realizes he may not finish his career in Green Bay now that the Packers have drafted Jordan Love.