GREEN BAY — Mason Crosby has tried to explain it many, many times over his 13 years as the Green Bay Packers kicker. It’s just difficult for people – even those close to him sometimes – to understand.

Crosby has always maintained that his high-pressure job is as much mental as physical – if not more mental.

It’s how he managed to make the game-winning kick – twice – during the Packers’ 2016 NFC Divisional playoff victory over the Dallas Cowboys at AT&T Stadium. It’s how he can bounce back from a crucial miss and put his next kick through the uprights. It’s how he came back from the worst season of his career back in 2012 to have his best year in 2013.

And it’s how Crosby withstood Sam Ficken’s challenge during training camp to keep the kicking job – all while his wife, Molly, was battling a rare form of lung cancer.

“It’s just kind of how I’ve trained my mind – forever,” Crosby explained. “I’ve just been able to compartmentalize and be able to go in and out of situations (mentally). I’m able to make sure whenever I’m at home I’m fully focused on that, and whenever I’m at work, I’m locked in here.

“It’s taken experience and training and being able to handle that. Sometimes, it makes me a little less emotional in certain situations. But I definitely had emotions with this – and yet I was able to definitely come into work, be with my teammates, feel the support here and use this space as my little escape through that time.”

Molly Crosby’s diagnosis came on the eve training camp in late July. The 32-year-old mother of five is a former cheerleader at the University of Colorado, where she met her future husband and developed a passion for fitness. But throughout the summer, she’d been experiencing bouts of coughing and congestion, which she initially thought was because of a lingering sinus infection. Finally, when her condition didn’t improve, the Crosbys consulted with Dr. James Ebben, one of the Packers’ team physicians.

When an x-ray showed a blurry spot on her right lung, the Crosbys traveled to the Mayo Clinic in Rochester, Minn., for further tests and to develop a treatment plan once the final diagnosis was made: A carcinoid endocrine tumor – a shock for Molly, a non-smoker.

After initially planning immediate surgery, further tests showed Molly had an additional blood clot in her stomach. The Crosbys’ medical team decided to do the surgery after camp – such tumors are unlikely to spread, and Molly’s condition didn’t require chemotherapy or radiation – leaving Mason to battle Ficken for the kicking job while supporting Molly before her surgery on Aug. 31, the day after the preseason finale against Kansas City.

The day of her surgery, Mason learned he’d held off Ficken to keep his job.

“It was a lot for him, but I think he was great. He still remained a leader like he always has been in our locker room,” special teams coordinator Shawn Mennenga said at midweek. “He’s one of the most respected players on our team for a reason. So, he handled it like a true professional.

“We would talk about it – not every day – but he would keep me updated on what was going on. I don’t think he let it affect him (football-wise). He still had to battle and win the job and I didn’t see any ill effects from it. I know there was a lot weighing on him, obviously, but he was great through it all.

“He’s played so long at such a high level because he’s mentally strong, so I think it’s definitely a tribute to him and his mental toughness to go through all those things. He’s got five young children, and with the schedule you keep during training camp and the pressure of battling for a job, it says a lot about him.”

Added head coach Matt LaFleur: “Anytime somebody goes through something like that, it really puts everything in perspective. But I think it speaks to what type of guy Mason is. He’s a tough-minded guy. He’s all about the team. To be able to focus on his job and do an outstanding job facing a circumstance like that, I think it really speaks to who he is.”

Crosby said he told a few of his teammates personally – quarterback Aaron Rodgers, punter JK Scott and long-snapper Hunter Bradley were the first to know – and that the organization let the rest of the players, coaches and wives know after that. Crosby said the club was understanding, and that he chose to kick against the Chiefs before traveling to the Mayo Clinic the next morning for Molly’s surgery.

“Being with my teammates, that’s important, too,” Crosby replied when asked why he chose to kick in that game. “Her family, her parents were there, and we knew with the timing that I could get there by the next morning.”

Crosby, a longtime supporter of the Vince Lombardi Cancer Foundation, has been the face of the team’s annual Packers vs. Cancer initiative, having lost his grandmother to breast cancer and with his sister-in-law Brittany still battling ovarian cancer. Throughout October, the Packers are selling a Packers vs. Cancer knit hat in the Packers Pro Shop, with $5 of every purchase going to the Lombardi Foundation. The team will also recognize cancer survivors prior to next week’s game against the Detroit Lions on Monday Night Football.

“It was intense – especially early on,” Crosby said. “As I look back now, as we’re in the thick of the season and she’s recovering, I’m thankful for (how) my family, her family, friends, the community that surrounded us to help with our kids and take as much of our plate as possible. That was special. I’m thankful to be here in Green Bay with such amazing people that just show up and they’re there to help however they can.”

Now, while Molly recovers, Crosby is able to put more of his focus on football again. AT&T Stadium remains a special place for him. Not only did the 2010 team win Super Bowl XLV there, but Crosby was part of one of the most dramatic postseason victories in the team’s storied history in that 2016 divisional game.

In that game, Crosby hit a 56-yard field goal with 1 minute, 33 seconds left in regulation to snap a 28-28 tie and give the Packers a 31-28 lead. After the Cowboys re-tied the game at 31-31 and Rodgers hit tight end Jared Cook for a 35-yard gain on third-and-20 with 3 seconds left, Crosby nailed the 51-yard game-winner as time expired – and had to do it twice after his first attempt left his foot after the Cowboys had called timeout.

“That one is definitely at the top of my list,” Crosby said. “The two minutes in that game were the most exciting two minutes I think I’ve ever had in a game. To be able to execute it twice in that situation was awesome.”

And another example of Crosby’s ability to focus and compartmentalize – just as he did throughout the summer.

“I love doing what I’m doing, but the importance of taking care of family and being there for Molly and the kids, when I look back on it, it was a special camp. I was able to really fully immerse in both things,” he said. “It was nerve-wracking, too. Day in and day out, it was coming in, having to work and compete at a high level, and then going home and flowing back into a normal routine. Then, we’d sit down at night and you’d remember that surgery was coming and Molly had cancer. Those things were heavy.

MOBILE, Ala. — It is difficult to declare someone the “winner” of the media portion of the Senior Bowl. Not only are there some new faces being introduced to the world, such as OL Ben Bartch from Division III school St. John’s (more on him later in t… 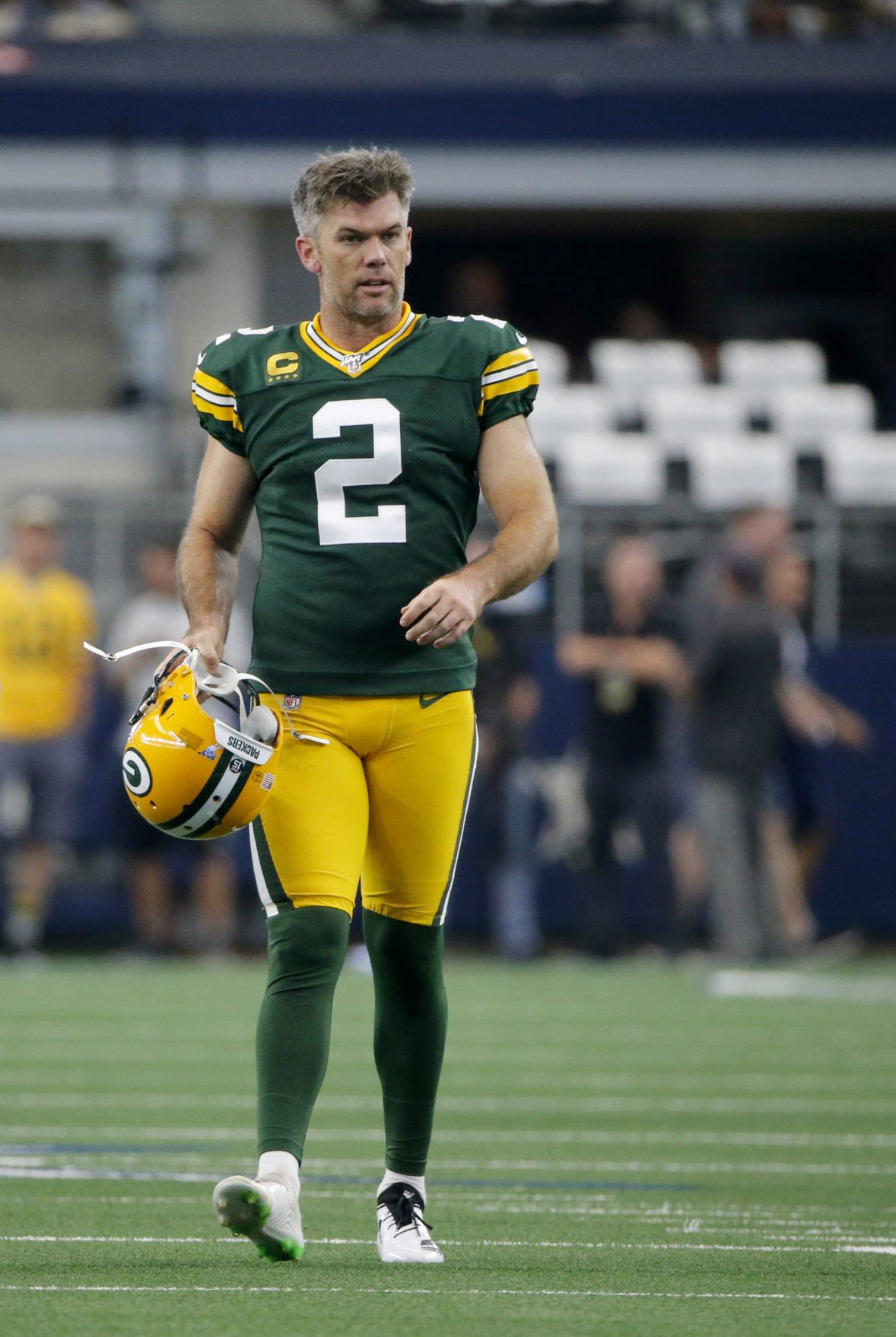 Green Bay kicker Mason Crosby walks off the field during the Packers' 34-24 win over the Dallas Cowboys on Oct. 6 at Arlington, Texas.