Chris McIntosh highlighted his experience in off-the-field programs for players at the University of Wisconsin in his cover letter to apply for the athletic director position in April.

McIntosh, who was hired in June to replace retiring AD Barry Alvarez, wrote that those results made him more proud than competitive outcomes during his time as deputy athletic director since 2017.

He also took credit for the athletic department's financial stability through the COVID-19 pandemic in a cover letter dated April 15, nine days after Alvarez's pending retirement was officially announced. The Badgers slashed expenses and reduced their workforce as revenue streams were disrupted.

McIntosh called himself a "visionary leader" in a resume submitted as part of his application, one of 21 released Friday by UW through a public records request.

None of the other 20 listed applicants appeared to be working in college athletics. Wisconsin law allows applicants to remain anonymous, so it's uncertain whether any others who were seeking the position ever will be identified.

Sean Frazier and Beth Goetz, athletic directors at Northern Illinois and Ball State, respectively, were believed to be among the finalists before McIntosh was announced in early June. They were not included in the list of 21 applicants who didn't request anonymity.

McIntosh's resume included a stretch from 2010 to 2014 — before Alvarez hired the former Badgers and NFL offensive lineman to work in athletics development — where he was co-founder and managing partner of 100 LLC. That company staged running events for women called the Dirty Girl Mud Run that drew complaints for cancellations.

Threats of lawsuits against the company in West Virginia led to an agreement with the state's attorney general in 2014 to refund registration fees for canceled events. 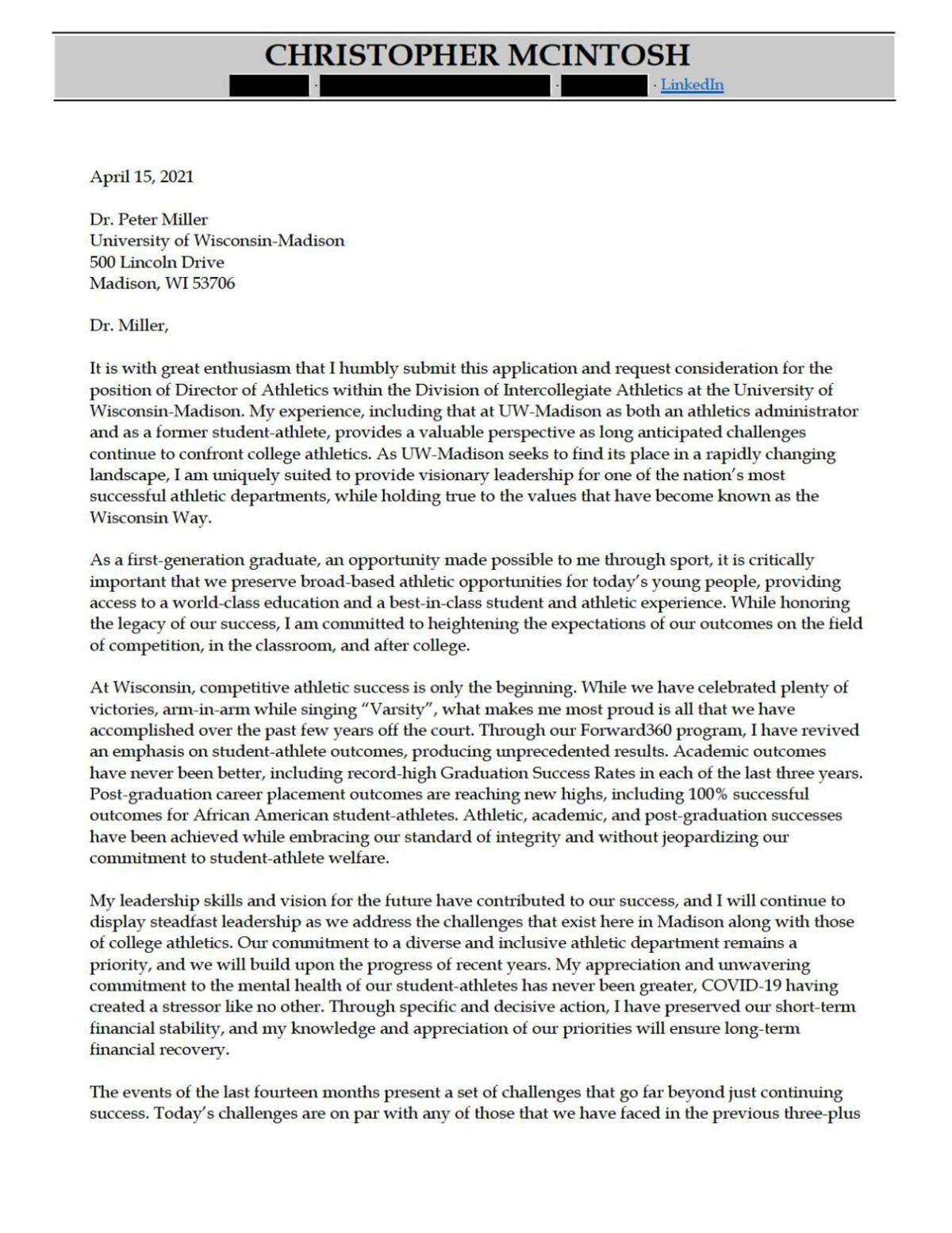 Wisconsin is a unique place and I think having someone who is a member of the family, provides needed stability in an unstable time in sports where loyalty is rare

He was always going to be the next man up. He needs to have the athletic department spend money on facilities and assistants.

I’d love to know his thoughts on philanthropy :)

It has the potential to bring incredible stability to the department -- Chryst, Gard and Mac could be there together for the next 10-15 years if everything goes right.

Introductory presser was a solid start. Honestly, make good hires, keep boosters involved, maintain on keeping the football and basketball programs in the spotlight, and the rest will fall in line from a revenue standpoint.

Pretty clear this was what Alvarez wanted. He's always had a pretty good batting average, so there's little reason to doubt the wisdom of this hire.

Time will tell. Really like Mac, but Sean Frazier intrigued me.

Smacks of a closed shop deal. I think the application process and interviews were a sham. Maybe he wants to bring back baseball

Is Sean Payton an early frontrunner for Coach of the Year?

Open Jim: Should the Packers press the panic button and start unloading Aaron Rodgers and other key players?

Danielle Hart was putting up the best numbers of her volleyball career before suffering a season-ending injury in practice this week.

The Badgers land a commit from Connor Essegian, the nation’s No. 45 ranked shooting guard and No. 7 ranked member of Indiana’s class of 2022.

Kyle Blackbourn will serve as the Badgers men's basketball team's new director of recruiting and scouting.

The three-star running back was suspended on Aug. 31 by Badgers coach Paul Chryst after an altercation with a teammate in a residence hall.

Milwaukee native Ralph Kurek fondly recalls scoring the winning touchdown in the closing minutes of the Badgers' last win over Notre Dame in football, which came in 1963.

Badgers volleyball coach Kelly Sheffield says freshman Lauren Jardine is "as talented as anybody we’ve got on our roster." But there's a ton of competition for playing time.

The freshman has six kills on six swings during a three-set victory over UW-Green Bay.