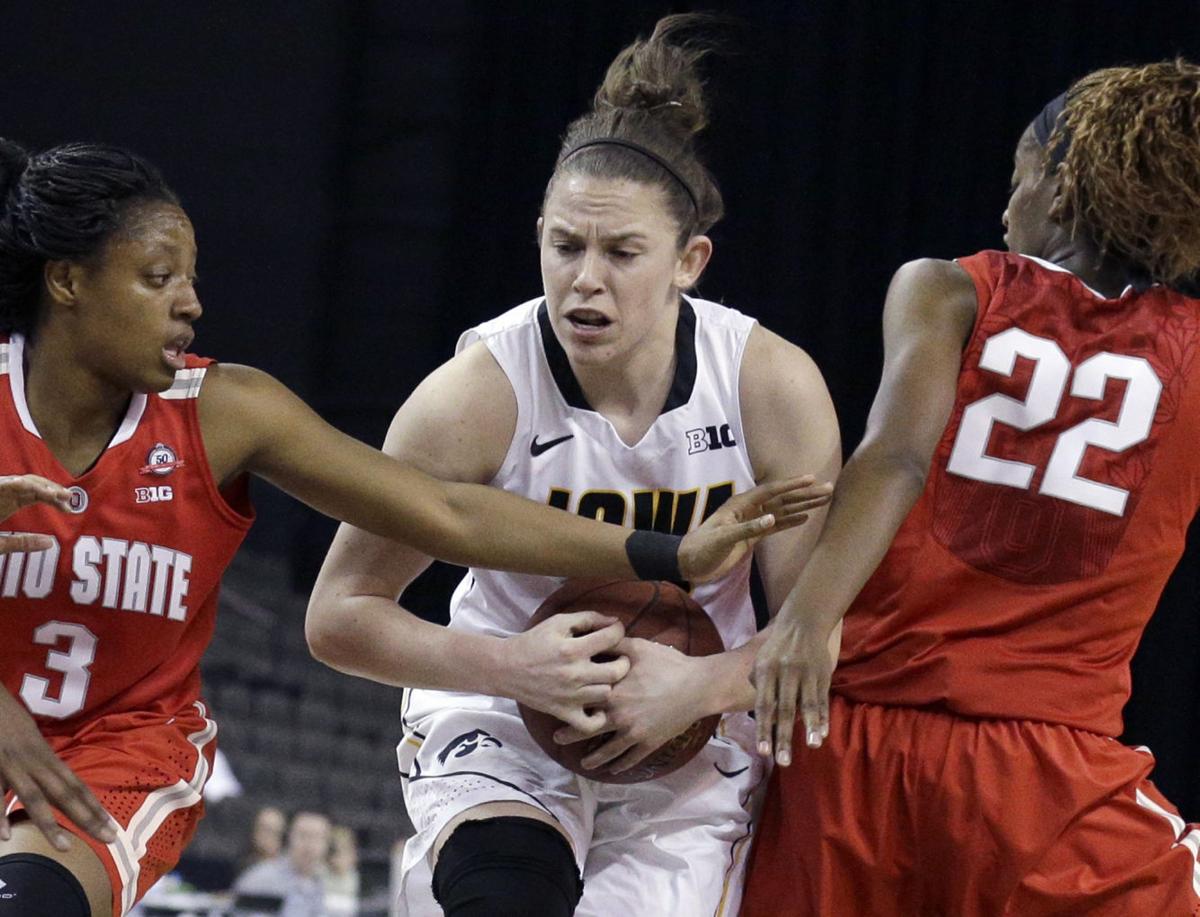 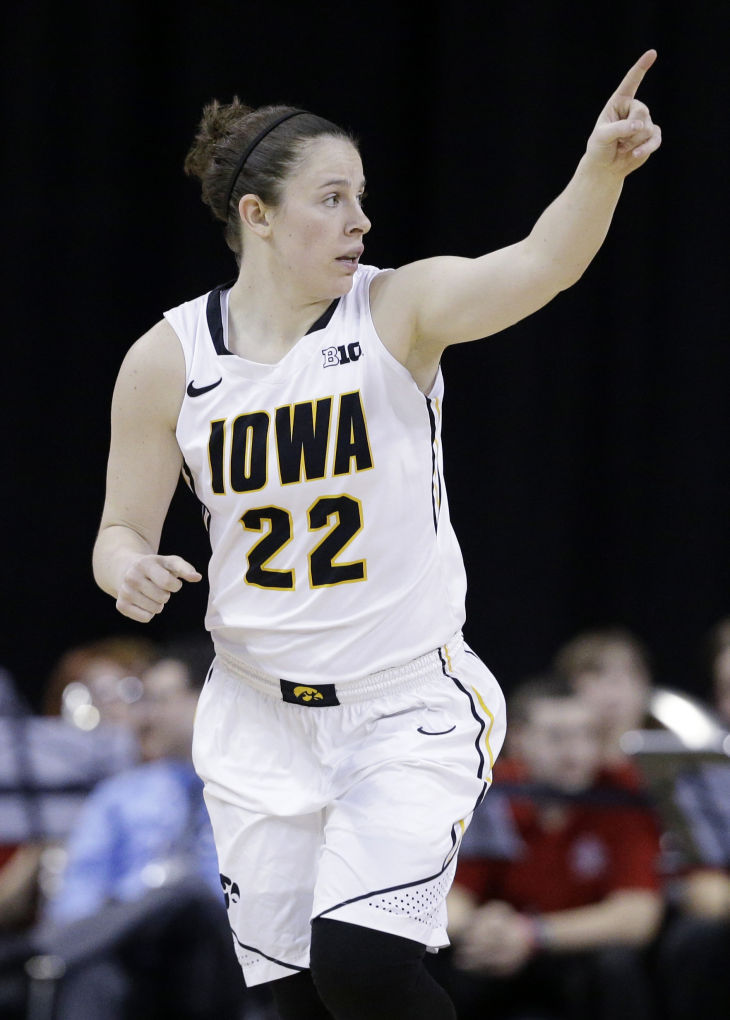 Iowa guard Samantha Logic was the 10th pick Thursday in the WNBA Draft. Logic, a Case High School graduate, was selected by the Atlanta Dream in the draft held at Uncasville, Conn. 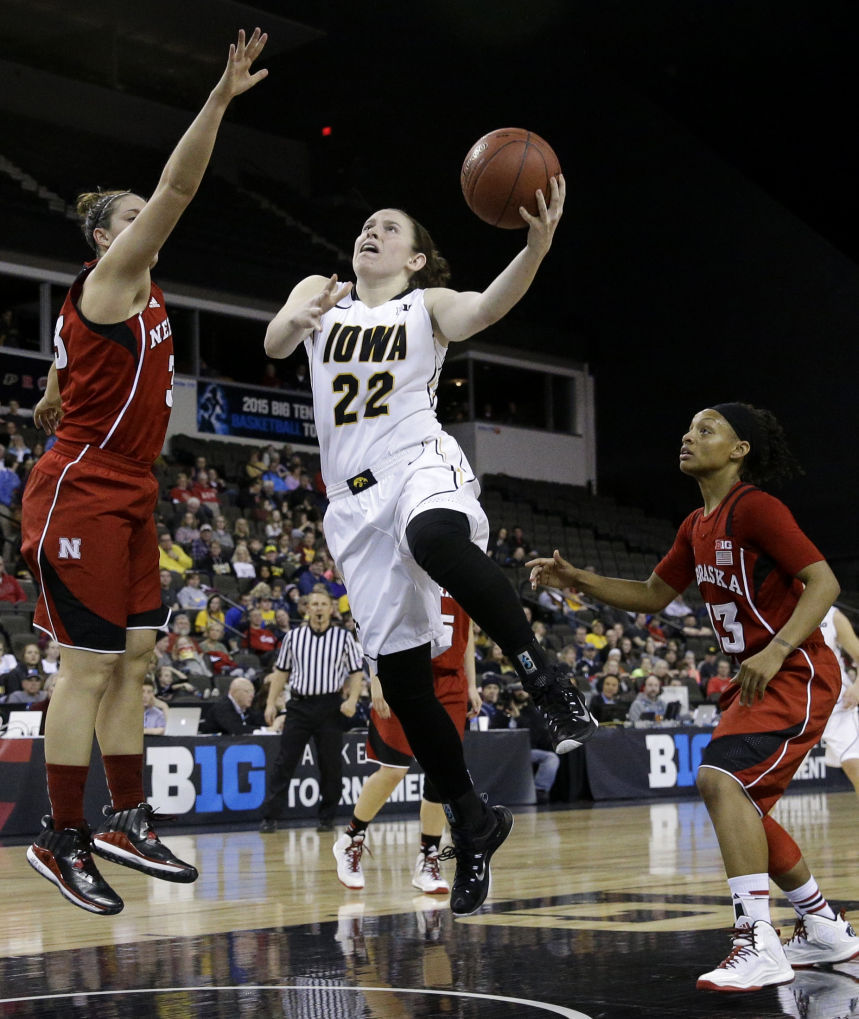 Iowa guard Samantha Logic, a Case High School graduate, goes in for a lay up against Nebraska forward Hailie Sample, left, and guard Brandi Jeffery during the second half of a Big Ten quarterfinal game March 6 in Hoffman Estates, Ill. Logic is the only player in NCAA history with at least 1,400 points, 800 rebounds, 800 assists and 200 steals in her career.

The details are a little sketchy after all these years, but the overall impact from this story goes a long way in explaining the greatness of Samantha Logic.

Logic remembers being in the fourth grade at Jefferson Lighthouse — this would be during the winter of 2002-03 — and she was playing for a team she recalls having purple T-shirts for uniforms. One of her teammates was a bench-warmer with minimal skills and Logic recalls one game when that player had an opportunity to score her first points of the season.

“I can’t remember what her name was,” said Logic, a 2011 Case High School graduate. “I think it was our last game of the season and she had not scored all year. She was in the game the whole fourth quarter and she got two, three or four shots at it.

“She finally got one in and that’s just how my teams have always played.”

Working to set up that player was Logic, who recalls the joy of seeing that girl score a basket. It’s a mindset that has stuck and, through that unselfishness, the 5-foot-9 guard is receiving the acclaim she insists means little to her.

Her latest honor came Friday, when she was named second-team All-American by ESPN. That came on the heels of Logic earning unanimous first-team All-Big Ten Conference honors for the second consecutive season.

Not that longtime Iowa coach Lisa Bluder has been surprised by all of this. After all, Logic is the only player in NCAA history with at least 1,400 points, 800 rebounds, 800 assists and 200 steals in her career.

“I just know that she’s probably the best all-around player I’ve ever coached,” said Bluder, who is expected to lead the 24-7 Hawkeyes, ranked 15th, into the NCAA Tournament March 20 against a team to be announced. “I’ve coached better shooters, I’ve coached better rebounders, I probably haven’t coached a better passer, I’ve had quicker players than her, but I’ve never had a player who does all those things as well as she does.

“I think that’s what makes her so special because she is a jack of all trades. Nobody in history has the numbers she has and in my mind that qualifies her as one of the best well-rounded players in the history of our game.”

One would never realize that from walking into Logic’s apartment. Her numerous trophies and awards “are in a closet some place,” Logic said and her Iowa City living quarters are dominated by motivational posters. Her mantra is to push her limits for the future, not toast herself for achievements.

One of the top players in women’s college basketball is also starting to loosen up. Logic has long maintained a business-like seriousness outside the confines of Iowa’s locker room, where Bluder and her teammates claim she is one of the funniest members of the Hawkeyes. But Logic is starting to reveal that side of herself outside the locker room.

“She’s a goofball,” senior center Bethany Doolittle said. “People have called her ‘Nails,’ on the court because she’s so tough on the court, but she’s a goofball. She’s into things that might surprise you, like Justin Bieber or The Golden Girls and stuff like that.”

Hey, Samantha, are you really a “Belieber” in Bieber, that 21-year-old Canadian teen sensation who is in the news as much for his scrapes with the law as he is for his singing?

“It was maybe moreso being stubborn because everyone just hated him when he came up,” Logic said. “He didn’t really do anything wrong when he first came up, but now I can’t defend him anymore. So it’s annoying.”

There’s nothing stubborn about Logic’s game. She is the NCAA’s active assists leader with 869, ranks third in Big Ten history and 14th in NCAA history.

And she has continued to produce even after suffering an MCL injury to her left knee Dec. 4 during a game against Louisville. She truly lived up to her “Nails” moniker, playing through intense pain for at least a month.

“I didn’t practice that much,” Logic said. “I got a lot of treatment, a lot of ice and probably for the first two weeks, I didn’t do a full practice. I was wearing a brace and it limited my mobility. It was just something I wasn’t used to.”

Nevertheless, Logic has continued to make a maximum impact, even if her statistics suffered for the next several games. Even a compromised Logic still finds a way to make a difference.

“She is the most unselfish player on the court at all times,” said senior guard Melissa Dixon, who made 10 3-pointers in a 100-98 victory over Drake Dec. 21. “Her goal is to make everyone around her better and she does every single day.

“But if we need to make something happen, she’s going to be the one who makes it happen for us. And that’s just been a common theme for her not only this year, but in her entire career here.”

That career will be over within the next few weeks or so. Logic, who is majoring in Health and Human Physiology, is on track to graduate in May. Where does she see herself in the next year?

“Hopefully, I’ll be playing in the WNBA or overseas — one of those two,” Logic said. “I’d like to do both just because I think it’s such a cool idea to travel and live in another country. That’s not something many people get to do. But for now, all my focus is being with my team and seeing how far we can go.”

Bluder expects that Logic will get picked in the WNBA draft. “It will depend on the type of team that drafts her whether she makes it or not,” Bluder said. “A lot of times, people get drafted and they don’t make it the first year, but they go overseas, learn more about the professional game and they come back and make it the next year.”

For now, though, there will certainly be more awards coming her way, not that she’s planning any monuments to herself.

After all, this has never been about Logic — even if the success of her teams has always indicated otherwise.

COLLEGE: Logic has been a four-year starter for Iowa, earning unanimous first-team All-Big Ten Conference honors as a junior and senior. She has been named a second-team All-American by EPSN for this season. Logic is averaging 13.5 points, 7.9 assists, 6.8 rebounds and 1.8 steals for the Hawkeyes, who are 24-7 and ranked 15th in the nation by AP. Iowa lost to Ohio State 91-85 in overtime March 7 in the Big Ten Conference championship game at Hoffman Estates, Ill.

Video: Racine native Samantha Logic 'wants to win a ring' in her senior year at Iowa

Samantha Logic heads into her senior season as Iowa's all-time assists leader. She talks about her time at Iowa and what she hopes to accompli…

Iowa guard Samantha Logic was the 10th pick Thursday in the WNBA Draft. Logic, a Case High School graduate, was selected by the Atlanta Dream in the draft held at Uncasville, Conn.

Iowa guard Samantha Logic, a Case High School graduate, goes in for a lay up against Nebraska forward Hailie Sample, left, and guard Brandi Jeffery during the second half of a Big Ten quarterfinal game March 6 in Hoffman Estates, Ill. Logic is the only player in NCAA history with at least 1,400 points, 800 rebounds, 800 assists and 200 steals in her career.