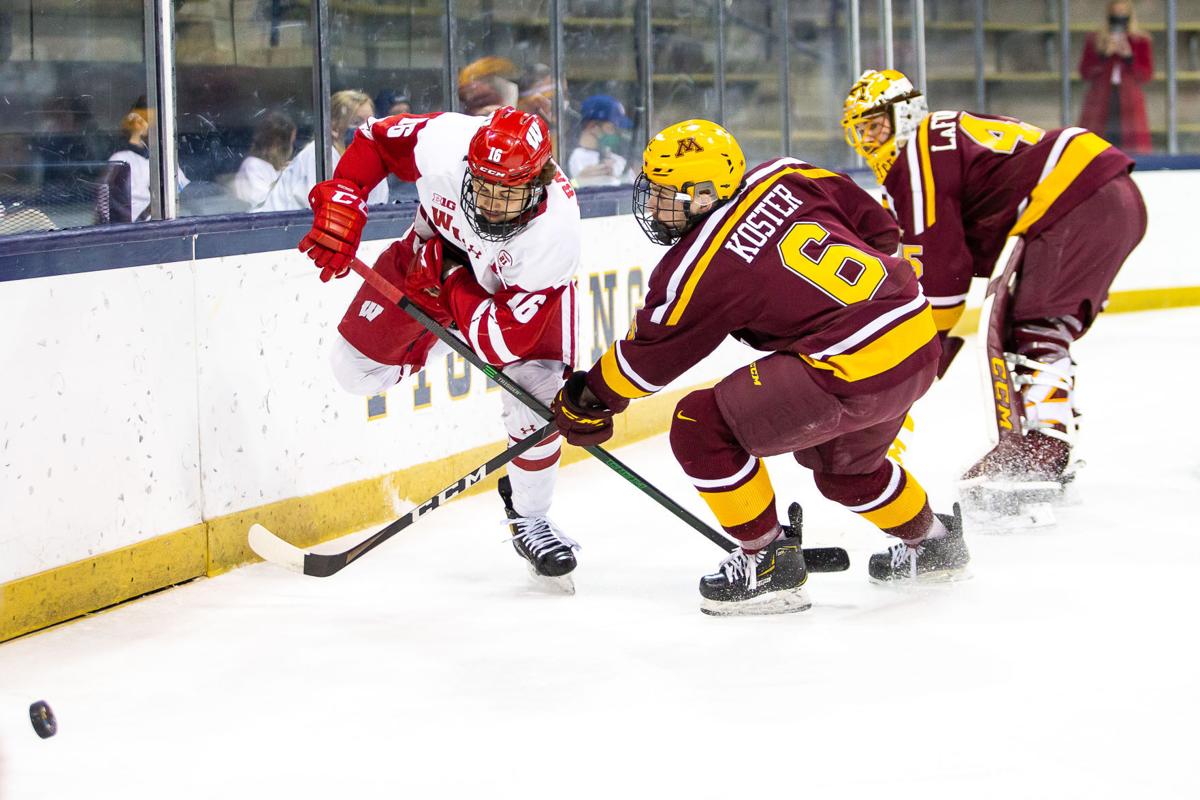 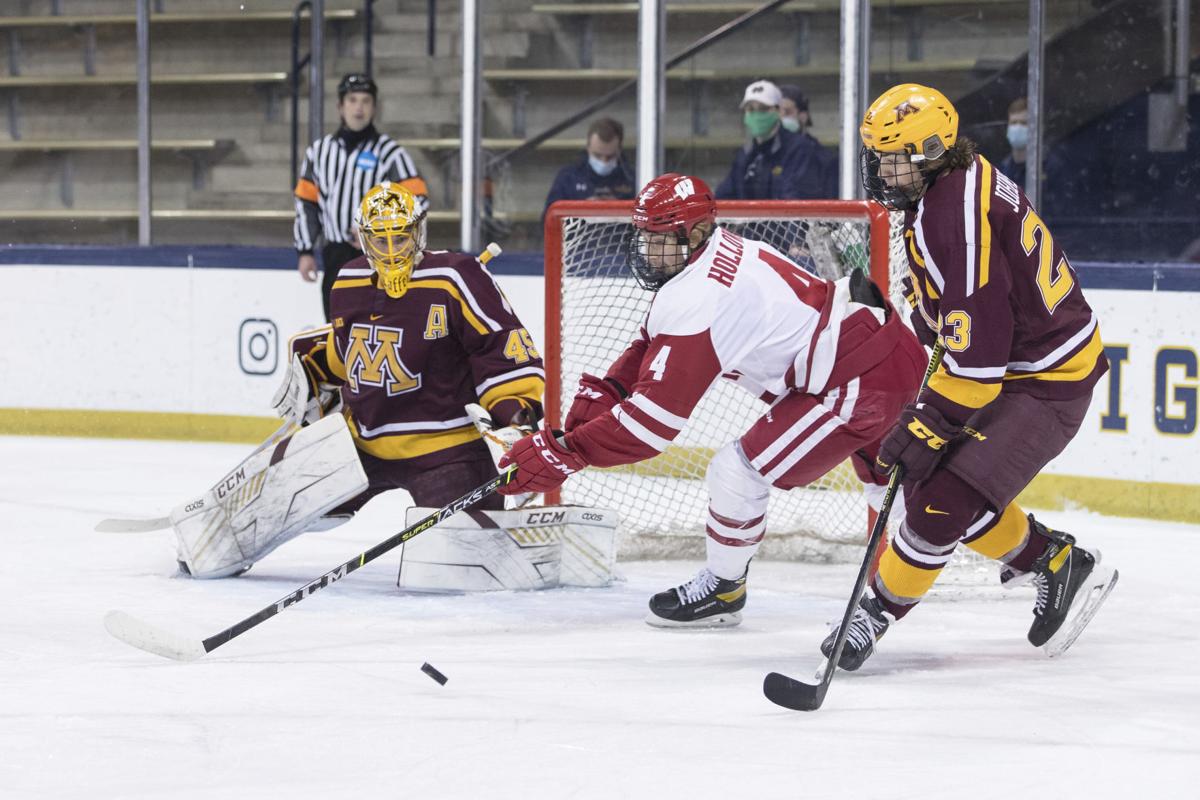 Minnesota goaltender Jack LaFontaine makes the save as Badgers forward Dylan Holloway looks for the rebound during the championship game of the Big Ten hockey tournament Tuesday night in South Bend, Ind. 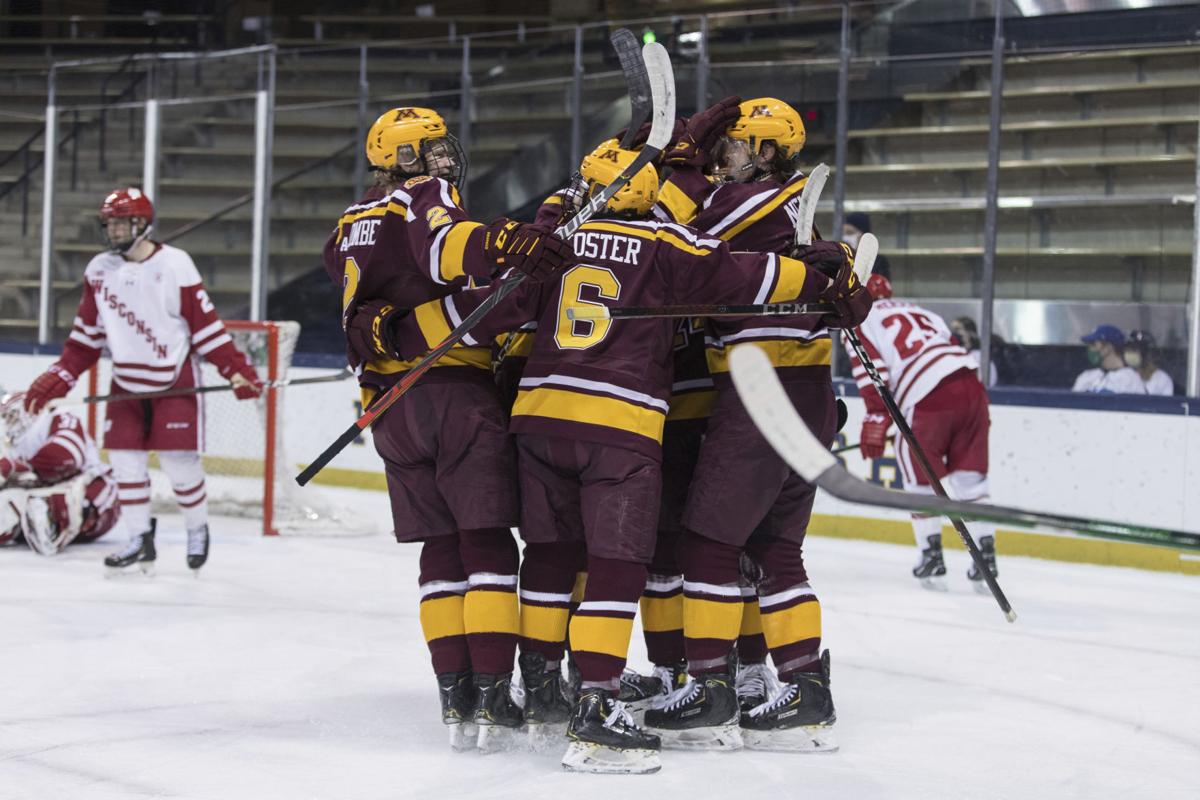 Minnesota players celebrate a goal against the Badgers on Tuesday. The Gophers won the Big Ten playoff championship 6-4.

SOUTH BEND, Ind. — The surge came too late for the University of Wisconsin men’s hockey team in the Big Ten Conference championship game.

The hole was too deep.

It was too deep because No. 4 Minnesota scored four times in the second period to open up a big lead.

It was too deep because the Golden Gophers, the team that should have been more tired, outraced the Badgers and won little competitions that added up.

“They wanted the puck more than us,” UW forward Roman Ahcan said. “That hasn’t been our team all year. It shows what happens when we don’t compete.”

A big rally in the third period couldn’t close the gap enough and Minnesota won the Big Ten playoff title with a 6-4 victory against the fifth-ranked Badgers at Compton Family Ice Arena.

The Gophers were hanging on by their fingernails after Cole Caufield scored his NCAA-best 28th goal of the season with 2:11 to play to pull the Badgers within one. Blake McLaughlin put his second goal of the game into an empty net to secure the Big Ten trophy’s destination as Minneapolis.

Ahcan scored his second goal after Vorlicky started the third-period comeback. The Badgers found success in mixing up their normally productive top two lines. But UW ultimately paid for a lackluster middle frame and sloppy coverage in its defensive zone.

Brannon McManus, Scott Reedy and Jaxon Nelson scored in a 2:42 span of the second period to put the Gophers into a 5-1 lead.

Minnesota, playing its third game in as many days, appeared to be the fresher group against a UW team that had a quarterfinal bye. Badgers coach Tony Granato pointed toward UW sweeping the Gophers in Minneapolis by a combined score of 12-2 in February as a point to remember.

“We just didn’t have it going,” said Granato, who earlier Tuesday was named the Big Ten’s coach of the year for a second time. “Minnesota, we kicked their butts a month ago. They wanted payback and they took advantage when we weren’t real sharp.”

UW’s eight-game unbeaten streak crumbled with an uneven effort against a team that had to play overtime Sunday and Monday to reach the final.

Instead of going into the NCAA tournament for the first time in seven years with a great deal of momentum, the Badgers have to regroup.

It was their first loss to the Gophers (23-6) in a conference or NCAA championship-round game; Minnesota won for the first time in six such meetings.

Ahcan scored to cut Minnesota’s lead to 2-1 in the second period but the Badgers (20-9-1) got caught watching over the final five minutes to enter the second intermission in a 5-1 hole that left UW embarrassed.

McManus restored Minnesota’s two-goal lead with a tap-in after a Sampo Ranta chance. Reedy beat Cameron Rowe with a wrist shot to make it 4-1. And Nelson was left open in front for a pass from behind the net.

The quick strikes ended the night for Rowe (19 saves), who was pulled for the second time in his freshman season. The other was a loss at Penn State on Jan. 22 in which he allowed three goals in less than 16 minutes.

“We were as flat-footed there for that 10 minutes as we’ve been for a long time,” Granato said. “They played like it was a championship game.”

Minnesota made its case to be a No. 1 seed in the NCAA tournament. The Gophers, who spent time at No. 1 in the polls at midseason, finished second to the Badgers by .002 in winning percentage for the regular-season title.

The Gophers got a goal from McLaughlin midway through the first period and one by Mike Koster early in the second. Minnesota’s Jack LaFontaine made 46 saves and was named the tournament’s most outstanding player.

Caufield scored for the fifth straight game after being named the first unanimous Big Ten player of the year earlier Tuesday. Minnesota did a good job pushing his chances to the outside for most of the game but he got free off a faceoff win late.

“We shut him down for about 50 minutes and then he’s going to find his way,” Gophers coach Bob Motzko said.

Caufield had eight shots on goal but finished minus-3 along with center Ty Pelton-Byce and showed some frustration in the second period, banging his stick on the boards when he went back to the bench.

The wayward second period cost the Badgers a chance at celebrating a second Big Ten title in 11 days.

“Ultimately, it came down to not wanting it enough,” Pelton-Byce said.

Minnesota goaltender Jack LaFontaine makes the save as Badgers forward Dylan Holloway looks for the rebound during the championship game of the Big Ten hockey tournament Tuesday night in South Bend, Ind.

Minnesota players celebrate a goal against the Badgers on Tuesday. The Gophers won the Big Ten playoff championship 6-4.