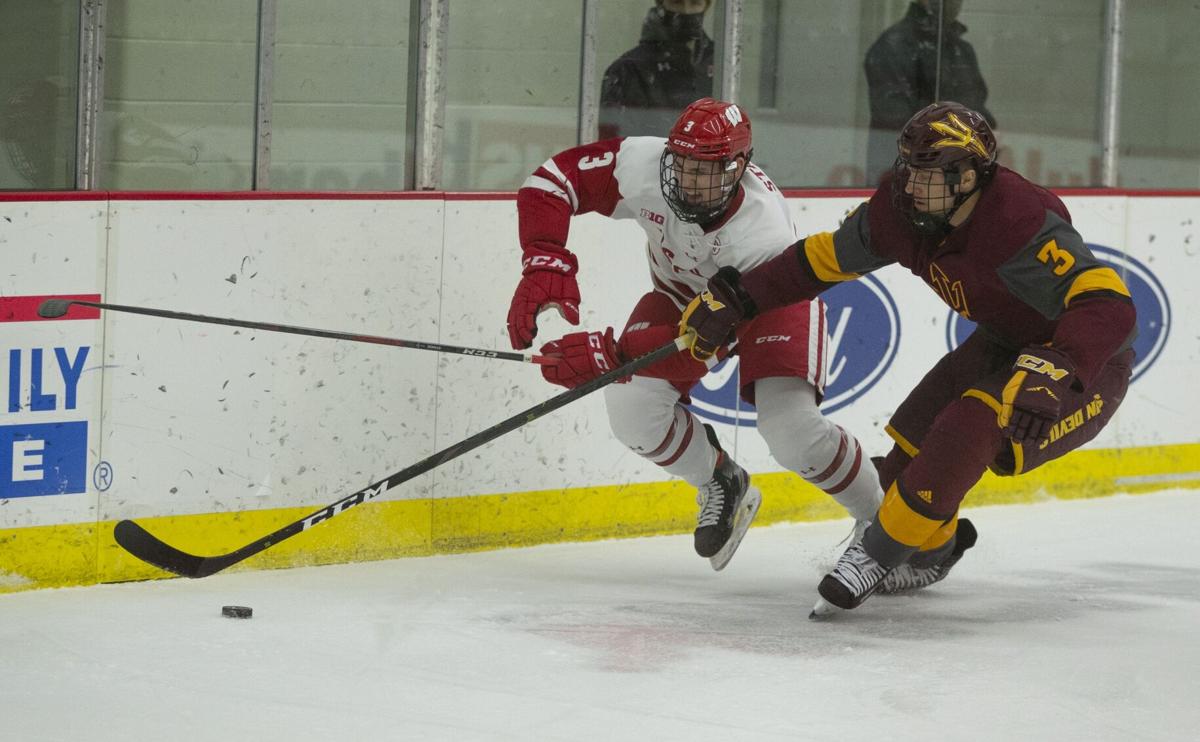 UW's Sam Stange chases the puck alongside Arizona State's Gvideo Jansons on Sunday at LaBahn Arena. Stange was credited with the Badgers' goal. 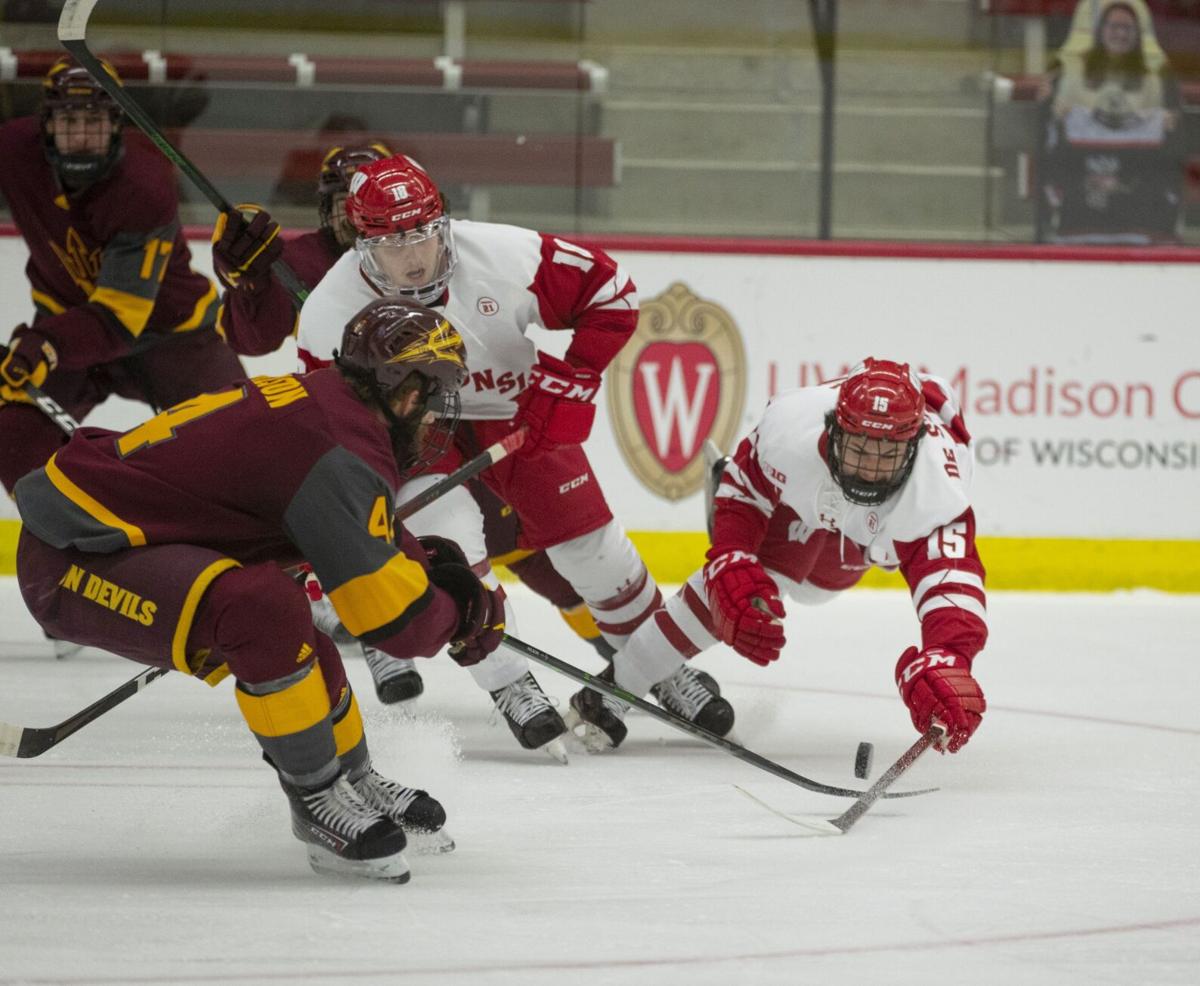 That’s how it has gone early this season for the University of Wisconsin men’s hockey team.

The latest regression was a 3-1 loss to Arizona State on Sunday at LaBahn Arena, completing a series sweep for the previously winless Sun Devils.

“There’s adversity built into the season,” Badgers captain Ty Emberson said. “We’re not going to win every game. There’s always been adversity in hockey and it’s not going to change this year.”

The fourth line did most of the damage for Arizona State, with sophomore Jax Murray scoring his first two collegiate goals.

The 14th-ranked Badgers, meanwhile, don’t have a fourth line. They played a second straight game without four forwards who are in COVID-19 protocol for either testing positive or being in close contact.

Forwards Roman Ahcan, Tarek Baker, Dominick Mersch and Ty Pelton-Byce could be out for the rest of the games the Badgers will play through Dec. 9.

Trying to mount a comeback in the third period, the Badgers didn’t have much left in the tank, coach Tony Granato said, from having to reduce their rotation to two forward lines at some points.

“This was a challenging week for us because of the shortened bench because of all of the players that weren’t able to play,” he said. “We asked a lot of the guys the last two nights and we came up short.”

Over the first four series, UW (4-4) has followed two wins with two losses in two rotations. It lost both ends of a non-conference home series for only the third time in the last 12 seasons. The others were against North Dakota in November 2014 and Denver in January 2019.

Arizona State (2-3-1) doesn’t have the pedigree of those programs but it was aggressive as it neared the tail end of a 22-day road trip to start the season. The Sun Devils also have games at Notre Dame on Thursday and Friday before heading back to the desert.

Their two first-period goals both had deflections involved. Matthew Kopperud’s wrist shot off a rush ticked off the left leg of Badgers defenseman Jesper Peltonen and handcuffed goaltender Robbie Beydoun.

Jarrod Gourley’s shot from the left point late in the period got caught up in three pairs of skates in front of Beydoun and bounced out to Murray, who deposited it past the goalie.

Combined with two-, three- and three-goal periods for the Sun Devils on Saturday, it was the first time in at least the last 22 seasons that the Badgers allowed multiple goals in each of the first four periods of a series.

UW’s Mathieu De St. Phalle and Jack Gorniak had good looks at the net, the first after a Sun Devils turnover and the second on a 2-on-1. Goaltender Evan DeBrouwer (28 saves) shut down De St. Phalle’s try to tuck the puck inside the right post, while Gorniak shot wide.

Granato went back with Beydoun (25 saves) after he pulled the goalie midway through Saturday’s game; five goals had gone past him.

“I did want to get him back in there and get him back in a rhythm,” Granato said. “I think he’s established himself as being a guy that we’re going to rely on and count on a lot this year.”

The Badgers got a gift from a former teammate in the opening four minutes of the second period to get within a goal. Sean Dhooghe, who transferred to Arizona State in the offseason, sent a pass from below the goal line to the left of the net directly into Sam Stange’s left skate, and it caromed through DeBrouwer’s legs.

But the Badgers weren’t able to build on the fortunate bounce and the Sun Devils took a two-goal lead again midway through the period. Murray redirected Jacob Wilson’s shot into the top left corner of the net for his second goal of the game.

Limited by the number of bodies they had at forward, the Badgers tried different combinations as the game wore on but didn’t find much success.

The Sun Devils kept top-line right wing Cole Caufield off the score sheet again but it wasn’t for a lack of chances. Caufield, who had four goals in two games against Penn State on Monday and Tuesday, had 13 shots on goal in the two outings against Arizona State. He was minus-5 for the series.

“It was a tough weekend,” Emberson said. “I think everyone just has to bounce back. This is the team we have right now so everyone needs to step up and find ways to win.”

Badgers men's hockey coach Tony Granato is among those who are believed to have interviewed for the position with the NHL expansion team.

An OT assist Monday made Cole Caufield just the second player to win the Hobey Baker Award and advance past the second round of the NHL playoffs in the same season.

UW's Sam Stange chases the puck alongside Arizona State's Gvideo Jansons on Sunday at LaBahn Arena. Stange was credited with the Badgers' goal.