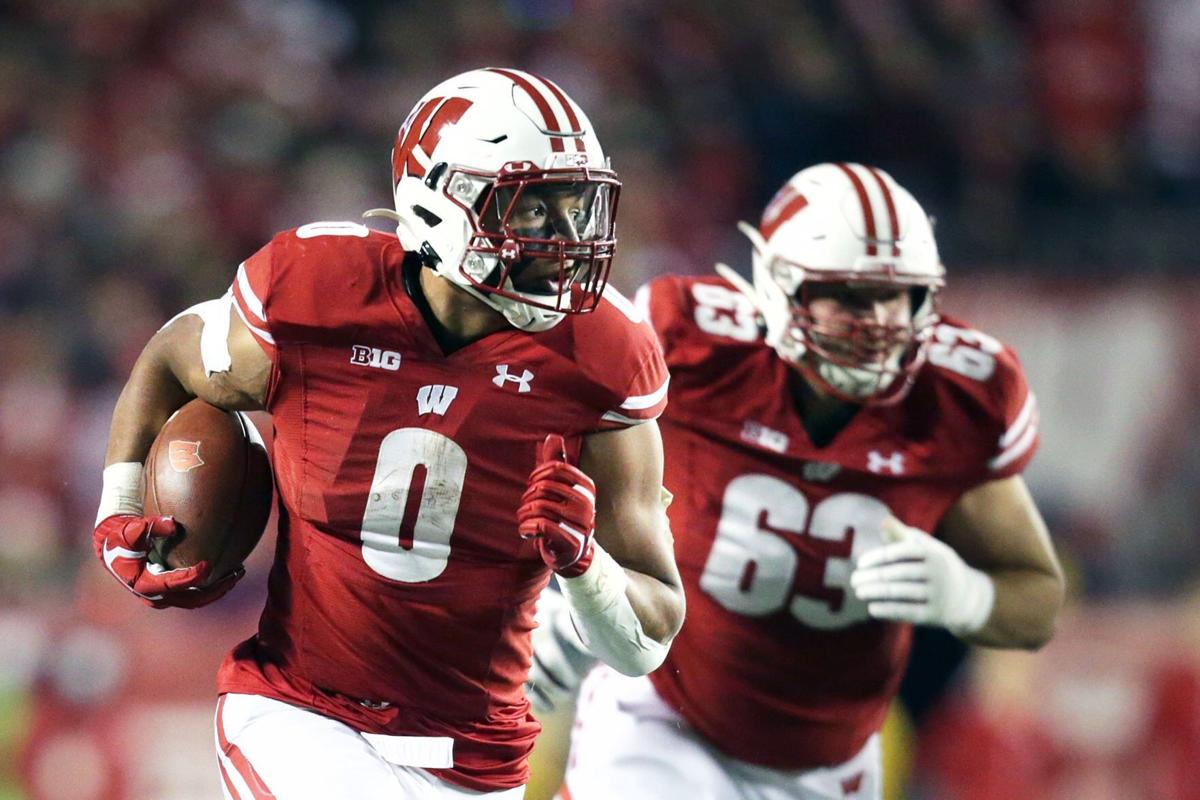 Wisconsin running back Braelon Allen (0) runs the ball for a 53-yard touchdown against Nebraska during the second half at Camp Randall Stadium in Madison, Wis., Saturday, Nov. 20, 2021. KAYLA WOLF, STATE JOURNAL 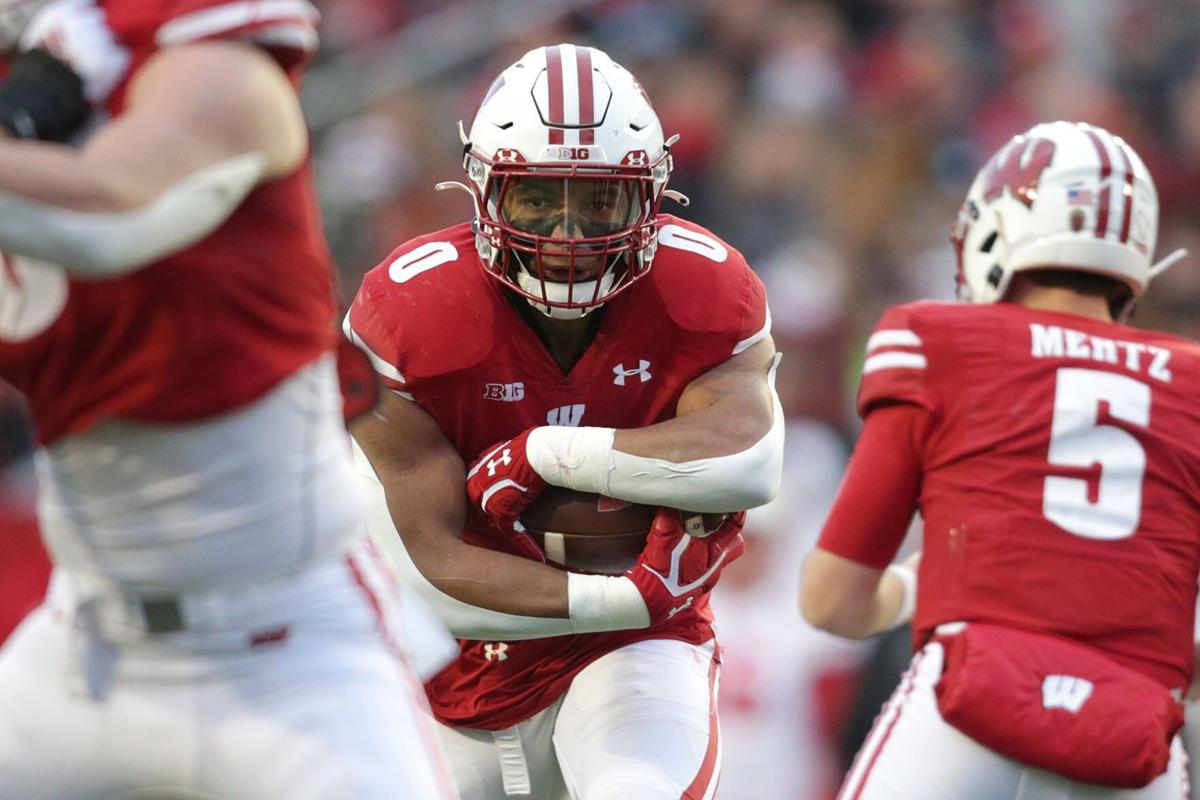 UW running back Braelon Allen had rushing touchdowns of 71, 3 and 53 yards against Nebraska.

Braelon Allen wasn’t sure if he liked playing football when he was in fifth grade.

As his youth football season wound down in 2014, he watched University of Wisconsin running back Melvin Gordon eviscerate Nebraska for a then-FBS record 408 yards rushing.

“I saw that game and that’s kind of what sparked it all for me,” Allen said. “I was trying to be like him one day.”

Allen had his Gordon moment Saturday at Camp Randall Stadium against those same Cornhuskers, leading UW to a 35-28 win as he shredded Nebraska for 228 yards and three touchdowns on 22 carries. And he did it in front of the man he grew up idolizing.

“With him being there, I felt like I had to do something today, and my team did a great job helping me do that,” Allen said.

“Today was a big day for him getting a chance to meet Melvin — that’s his hero,” UW coach Paul Chryst said. “I thought it was pretty cool just seeing those two together.”

Gordon was the Badgers’ honorary captain for the pregame coin toss. The former UW star chatted briefly with the current star before the opening kickoff.

“Just told me to do my thing,” Allen said.

He broke off a 70-yard touchdown, his first of the game, which is the second-longest run by a Badgers back this season. He won the game with 2 minutes, 37 seconds left with a 53-yarder that featured his signature blend of patience, physicality and decisiveness.

And he’s now in rarified air.

Allen is the sixth freshman in school history to crack 1,000 yards. He sits at 1,062 for the season with at least two games to play. That puts him fifth all-time among UW freshmen — 10 more than James White, who ran for 1,052 in 2010. Allen has a ways to go until he catches Anthony Davis’ 2001 mark of 1,466 yards. But that number might be in danger at the rate Allen’s going.

Grading the Badgers: Defense turns in a stinker but Braelon Allen gets the job done

Allen was buried on the depth chart at the start of the season. But a series of departures from the program and injuries to the backs ahead of him opened one opportunity after the other.

Allen battled fumbling issues early as his chances grew, but he learned week by week and cut down on his mistakes. His patience and decision-making grew at the same time.

“I think him just finding holes when as an offensive line I knew we weren’t on point with stuff,” senior left tackle Tyler Beach said when asked what impressed him most this time.

And Allen now stands among some elite company.

“It’s definitely cool, especially to be mentioned again with those guys and guys that I looked up to and watched growing up,” he said.

Analysis: What Nebraska did to put up the most yards of the season on Wisconsin's defense

Grading the Badgers: Defense turns in a stinker but Braelon Allen gets the job done

Jim Polzin: Wisconsin football's failure against rival Minnesota 'a disgrace to the program'

The Badgers started the season talking about making history and completing unfinished business. They ended it by getting pushed around by a rival they've dominated.

Badgers gameday primer: TV, tickets and everything else fans need to know as Wisconsin battles Minnesota

Whether you're watching from the comfort of your couch or making the trip to Minnesota, the State Journal has Badgers fans covered with a complete breakdown of everything they need to know as the Badgers battle the Golden Gophers for the rights to Paul Bunyan's Axe in Minneapolis.

Odd rule proves costly in Wisconsin's loss to Minnesota. Here's why it was correctly applied

With the Badgers in the red zone on their first drive of the game, a defensive holding call on second-and-9 appeared to bail out UW, but the penalty didn't result in a first down.

Jim Polzin: The changes Paul Chryst needs to consider to get Wisconsin football headed back in the right direction

Offensive line and special teams were two weaknesses on an 8-4 team. But would the Badgers coach deliver pink slips to two of his longtime assistants?

Reasons for the Badgers' poor rushing attack, special teams issues and accuracy struggles from Graham Mertz are included in this week's rewatch of the Badgers.

Green-May finishes his Badgers career with 20 games played, eight tackles and a sack.

Grading the Badgers: Head-scratching decisions cause coaching mark to plummet

Ineptitude on offense leads to awful grade as columnist Jim Polzin grades Wisconsin's loss to Minnesota and the end of the Badgers' push to reach the Big Ten title game.

No single sequence showed the Badgers’ disarray more than what happened when they faced fourth-and-1 at their 21-yard line down by 10 with 4 minutes, 26 seconds remaining.

State playoffs are winding down across the country. But a couple of incoming Wisconsin players still had big games, including a recruit from Pennsylvania and two incoming receivers.

Jim Polzin: Wisconsin football can win a 4th Big Ten West title in 7 seasons. Here’s why it would be the most impressive

A win over Minnesota would give the Badgers a 6-0 record in what arguably is the third-best division in the country.

Wisconsin running back Braelon Allen (0) runs the ball for a 53-yard touchdown against Nebraska during the second half at Camp Randall Stadium in Madison, Wis., Saturday, Nov. 20, 2021. KAYLA WOLF, STATE JOURNAL

UW running back Braelon Allen had rushing touchdowns of 71, 3 and 53 yards against Nebraska.