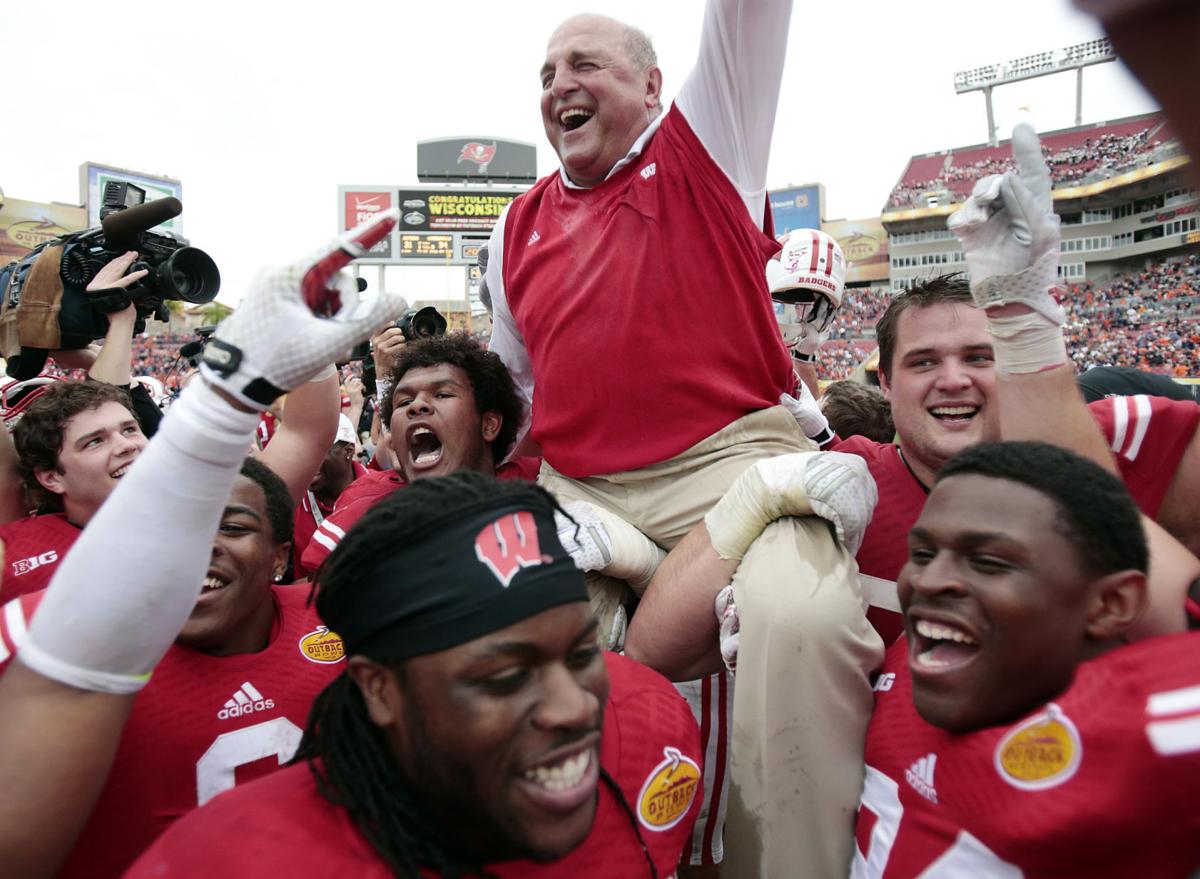 Players lift interim head coach Barry Alvarez onto their shoulders after their victory over Auburn in the Outback Bowl on Jan. 1, 2015, in Tampa, Fla. Alvarez, then UW's athletic director, agreed to coach in the game after Gary Andersen quit a month earlier. 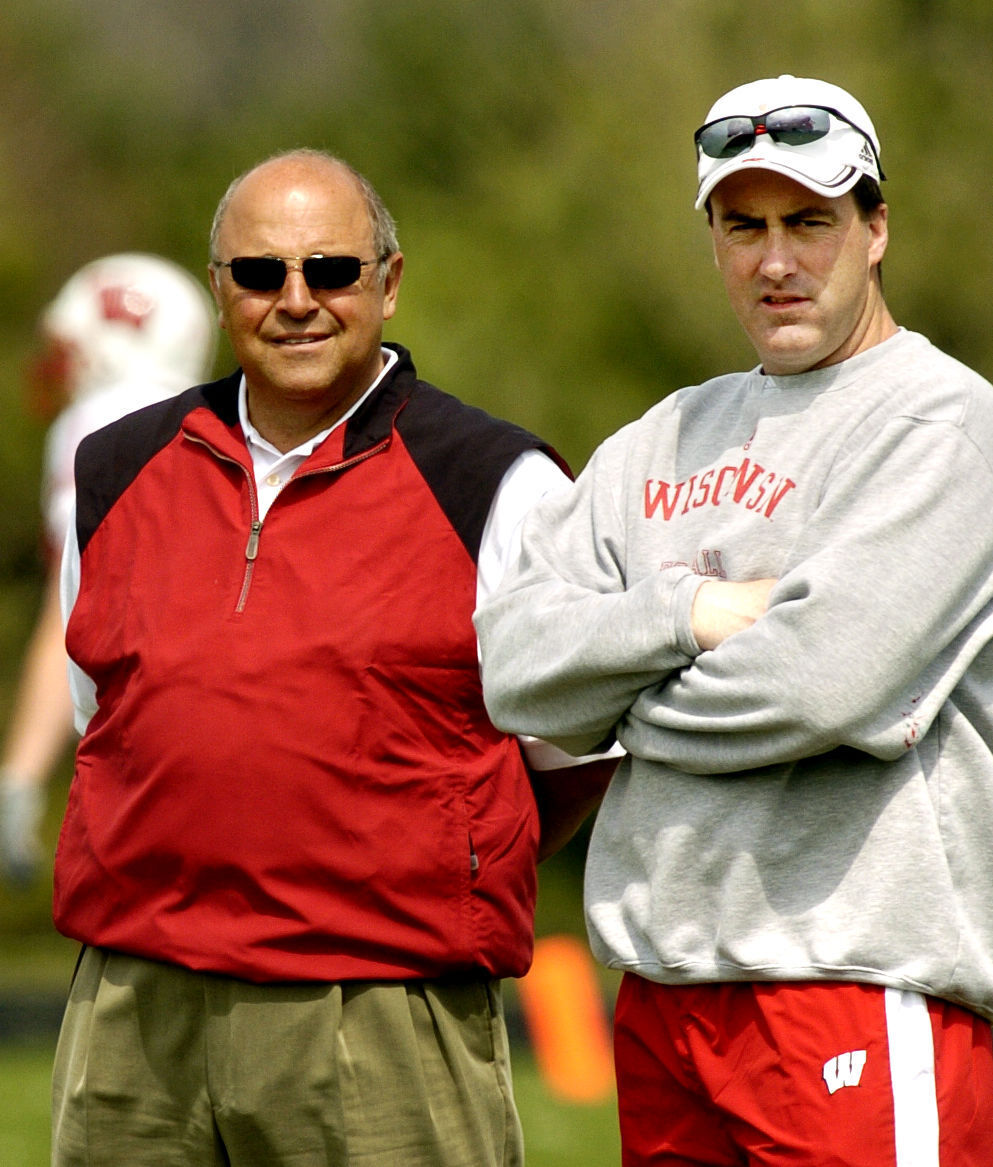 After Gary Andersen resigned as University of Wisconsin football coach following the 2014 Big Ten Conference title game, the seniors asked Barry Alvarez to come out of the athletic director’s box and coach the Badgers in the Outback Bowl.

There was only one problem. Alvarez’s grandson, Joe Ferguson, was on the team and he had been reluctant to even go to UW because he didn’t want anyone thinking he would get special treatment. Alvarez told the seniors he’d coach only if it was OK with Ferguson.

But when Alvarez called Ferguson seeking his approval, he didn’t exactly get the response he expected.

“Grandpa,” Ferguson told Alvarez, “I think it would be awesome. Besides that, we need a little swagger on the sideline.”

If UW needed a little swagger in 2014, you can imagine how badly it needed swagger in 1990 when then-athletic director Pat Richter hired Alvarez, an on-the-rise assistant coach at Notre Dame, to turn around a UW football program that had bottomed out by 1989. At the time, UW’s football and men’s basketball programs barely registered on the national radar and the athletic department was bathing in red ink.

UW needed a plan to climb out of its hole and Alvarez arrived with a good one thanks to his apprenticeships under coaches Bob Devaney at Nebraska, Hayden Fry at Iowa and Lou Holtz at Notre Dame. As much as it needed a plan to resurrect football, though, UW’s athletic department needed a leader, a frontman, a star. It needed someone who didn’t just seek the spotlight but who demanded it and reveled in it. It needed someone with supreme confidence and a bold approach. In short, it needed swagger.

For the next 31 years, Alvarez gave UW all the swagger it would need — and a whole lot more.

Now 74, Alvarez announced Tuesday that he would retire from UW on June 30 following 16 years as football coach and 17 as athletic director. He’s in the College Football Hall of Fame for his 119-74-4 record as a coach and, as the leader of an athletic operation that has become a top-25 fixture in football and men’s basketball and a national title contender in other sports, might be the most well-known athletic director in the country.

Alvarez’s confidence was on full display at his introductory news conference in 1990, when he warned fans to buy season football tickets while they can. His attitude has rubbed people the wrong way at times and he’s made a few mistakes along the way, but Alvarez leaves UW as the dominant figure in the school’s athletic history.

“I was mentored by people who knew how to win,” Alvarez said. “I knew the issues (recruiting) in the state. I knew the things that I had to address. I felt like I had a very good plan for success here. ... I just felt confident. I’d won every place I had been before, why not here?”

Alvarez is by no means the sole architect of a department that routinely wins and does it in the right way, but he was the one who started it by turning around the football program and the one who sustained it by creating a culture that consistently brings back UW’s best and brightest as coaches and administrators.

He has every reason to be proud. UW’s athletic department was a mom-and-pop operation in 1990 and Richter and Alvarez shepherded it into the 21st century. Both knew the necessary first step in any revival was winning in football and Alvarez’s team won the Big Ten title and the Rose Bowl by his fourth season. Success in football gave the athletic department the financial wherewithal to improve many of its other programs.

Over the 31 years, Alvarez taught UW two valuable lessons, ones that should never be forgotten.

As a coach, his first job was to lock up the best high school players from the state. Instead of swinging and missing on the top national recruits, he brought in players with high character and a passion for both the game and the Badgers, making UW a developmental program featuring mature, physical athletes who could compete with the high-profile recruits and big-time programs.

It has become a formula for winning at UW in more than football, too. UW’s extremely successful men’s basketball program has taken virtually the same approach over the last 25 years.

As athletic director, Alvarez followed Richter’s lead by emphasizing the hiring coaches and administrators who know the lay of the land at UW and are deeply invested in the school. This is particularly important because the academic side at UW doesn’t capitulate to athletics and knowing how to navigate through campus politics is important for success.

Andersen, one of the few high-profile outsiders hired by Alvarez, bucked the system before bolting after just two seasons and leaving the football program in a state of peril, though it recovered mainly because Alvarez replaced him with former UW player and coach Paul Chryst. More than most schools, hiring from within the family has worked out well at UW.

Alvarez’s biggest goal at UW was to build something that would last. Mission accomplished. He leaves behind an athletic department that has earned the right to have all the swagger in the world.

Photos: A look back at Barry Alvarez's tenure with the Wisconsin Badgers

Photos: A look back at Barry Alvarez's tenure with the Wisconsin Badgers

Tom Oates, who retired as a full-time columnist, has returned to write occasional columns for the State Journal.

Replacing Barry Alvarez as the University of Wisconsin’s athletic director will be both a tremendous opportunity and challenge.

Final countdown: Breaking down Barry Alvarez's career by the numbers

In Barry Alvarez's three decades with the University of Wisconsin, from his time as head coach of the football program through his tenure as a…

Players lift interim head coach Barry Alvarez onto their shoulders after their victory over Auburn in the Outback Bowl on Jan. 1, 2015, in Tampa, Fla. Alvarez, then UW's athletic director, agreed to coach in the game after Gary Andersen quit a month earlier.