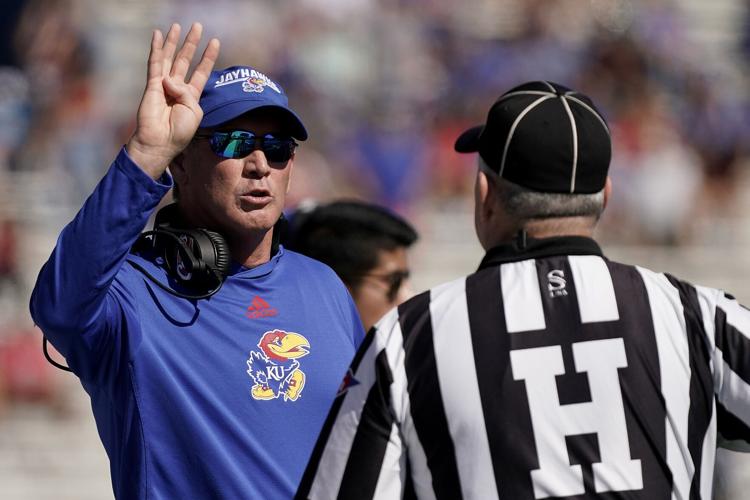 Kansas head coach Lance Leipold talks to an official during the first half of an NCAA college football game against Duke Saturday, Sept. 24, 2022, in Lawrence, Kan. (AP Photo/Charlie Riedel) 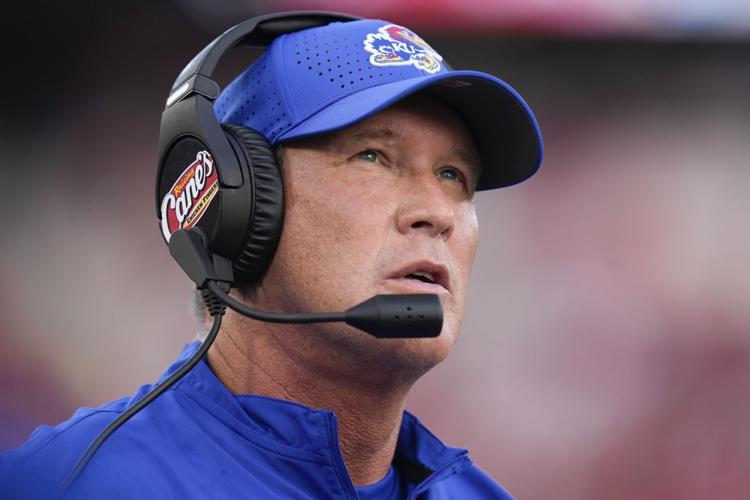 Kansas head coach Lance Leipold watches from the sideline during the first half of an NCAA college football game against Houston, Saturday, Sept. 17, 2022, in Houston. (AP Photo/Eric Christian Smith) 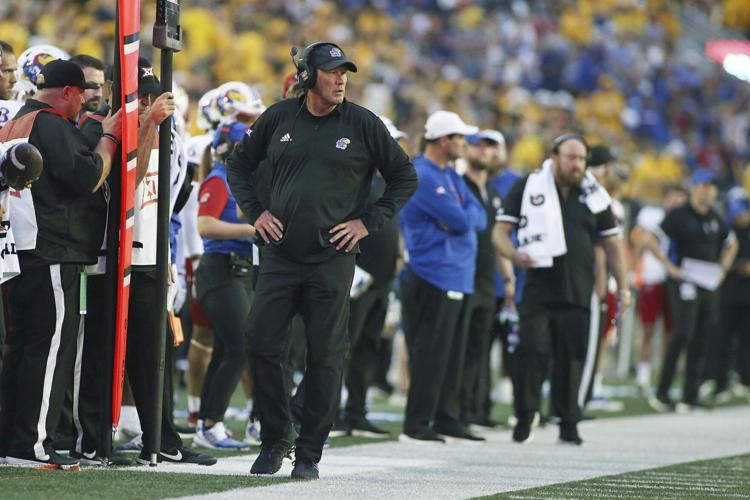 Kansas coach Lance Leipold watches from the sideline during the first half of an NCAA college football game against West Virginia in Morgantown, W.Va., Saturday, Sept. 10, 2022. (AP Photo/Kathleen Batten) 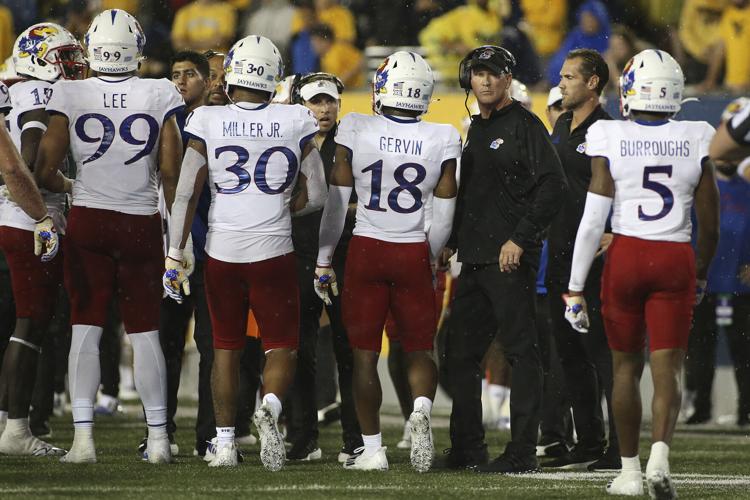 Kansas coach Lance Leipold, third from right, meets with his players during the second half of an NCAA college football game against West Virginia in Morgantown, W.Va., Saturday, Sept. 10, 2022. (AP Photo/Kathleen Batten)

LAWRENCE, Kan. — The long-suffering football fans at Kansas mostly thought it flattering when Nebraska fired Scott Frost and rumors began that the Huskers would be interested in hiring the Jayhawks' Lance Leipold as their next coach.

When Wisconsin fired its coach this week? The feeling wasn't so much flattery as fear.

Leipold was born in the small town of Jefferson, about a 40-minute drive from Camp Randall Stadium in Madison, and he's about as Wisconsin as summer sausage and cheese. Leipold played college football at UW-Whitewater, the Division III school where he later got his coaching start and won six national championships as a head coach. He also spent three seasons working for Barry Alvarez in the early 1990s as a graduate assistant with the Badgers.

So while the ties between Leipold and Nebraska were tenuous at best — he coached at tiny NAIA school Doane and the since-disbanded program at Nebraska-Omaha — the links Leipold has to Wisconsin run deep.

“We're happy here. We have no plans on going anywhere,” Leipold said Tuesday, when asked by The Associated Press about the interest he's generated with the first 5-0 start at Kansas since 2009 — one that has the Jayhawks ranked No. 19 as they head into this weekend's game of unbeatens against No. 17 TCU.

“Anything else is rumors," Leipold continued. "Some of these things are happening while we're in the film room — I didn't even know some of the stuff Sunday until later in the evening, when I'm getting all these text messages. I had no idea.”

He's referring to Wisconsin firing Paul Chryst, who was born in Madison and played quarterback for the Badgers before getting into coaching at Division III UW-Platteville. and after stops that included the NFL, returning to Madison and ending up becoming head coach in December 2014.

Chryst won at least 10 games in four of his first five seasons. He led the Badgers to a bowl game every year, including last season, when they went 9-4, finished second in the Big Ten West and won the Las Vegas Bowl. And twice he led Wisconsin to top-10 finishes in the final AP poll, one fewer than Alvarez accomplished in 16 seasons.

None of it mattered after the Badgers got off to a 2-3 start this season. Chryst was fired Sunday and replaced by defensive coordinator Jim Leonhard, a former Wisconsin star who will serve the rest of the season as interim coach.

“Paul Chryst is a close friend. I've known Paul since his late father tried to recruit me to Wisconsin-Platteville. That's a good family, a good man,” Leipold said. “That's a guy who averaged nine wins a year and got let go. But you know, that's a part of what we signed up for these days. It's a changing world in a lot of different ways and that's unfortunate.

“And I'm not questioning anyone's decision because there's a lot of factors that go into these (firings) that nobody really knows, but that's me speaking as a person and as a fan, not as a coach.”

Kansas will do everything it can to keep Leipold, whom it plucked from Buffalo on the heels of the failed Les Miles experiment in Lawrence. Leipold was rewarded with a one-year extension in May despite having won just two games last season.

As part of that extension, the average annual value of the 58-year-old's contract was bumped to $2.6 million. He's still the lowest-paid Big 12 coach by a wide margin: Iowa State's Matt Campbell is due $4 million this year, and Oklahoma State made Mike Gundy the conference's highest-paid coach at $7.5 million.

But Kansas is seizing on the momentum of a program more accustomed to 10-loss seasons than ones in which it wins five games. ESPN is bringing “College GameDay” to Lawrence for the first time Saturday, when the school aims for a third consecutive sellout.

Season ticket sales are rising faster than at any point in recent memory. The school also is pushing ambitious plans to replace Memorial Stadium, which dates to the 1920s, as well as building a hotel, conference center and other amenities that would create a new “front door” to the entire campus.

“What does this all mean? It means a lot for this program as far as where we're at and how we're viewed now,” Leipold said of all the attention this week. “It means a lot to this athletic department and this university and this campus.”

Now 19th, the unbeaten Jayhawks had not been ranked since mid-October 2009, the longest dry spell among Power Five conference programs.

“Something needs to change because that’s not us,” Badgers safety John Torchio said. “That’s not the Wisconsin football we all know.”

The Jayhawks have not been ranked since mid-October 2009, a dry spell of nearly 13 years that is currently the longest among Power Five conference programs.

In the long run, Melvin Tucker could be worth every penny Michigan State paid him. But it was premature to make him one of the highest-paid coaches in the country.

Three weeks into the season and there are still more than few teams ranked in The Associated Press college football poll that have a lot to prove, topped by Michigan.

Being a good, but definitely not great, quarterback can be a rough ride in college football. This is the life Penn State's Sean Clifford and Oregon's Bo Nix have led.

The greatest weekend in the history of Sun Belt football was not enough to push any of the conference's upstarts into The Associated Press poll.

The college football offseason is mostly spent trying to figure what's going to happen when the games start. Then in Week 2 we realize just how much we didn't know — and that's when the fun starts.

The thrilling victory and impressive performance by tantalizingly talented quarterback Anthony Richardson took Florida from unranked in the preseason to No. 12.

Defending national champion Georgia crushed No. 11 Oregon with stunning ease, unleashing a more dynamic offense and a defense that was just as salty as last season's wrecking crew.

Kansas head coach Lance Leipold talks to an official during the first half of an NCAA college football game against Duke Saturday, Sept. 24, 2022, in Lawrence, Kan. (AP Photo/Charlie Riedel)

Kansas head coach Lance Leipold watches from the sideline during the first half of an NCAA college football game against Houston, Saturday, Sept. 17, 2022, in Houston. (AP Photo/Eric Christian Smith)

Kansas coach Lance Leipold watches from the sideline during the first half of an NCAA college football game against West Virginia in Morgantown, W.Va., Saturday, Sept. 10, 2022. (AP Photo/Kathleen Batten)

Kansas coach Lance Leipold, third from right, meets with his players during the second half of an NCAA college football game against West Virginia in Morgantown, W.Va., Saturday, Sept. 10, 2022. (AP Photo/Kathleen Batten)