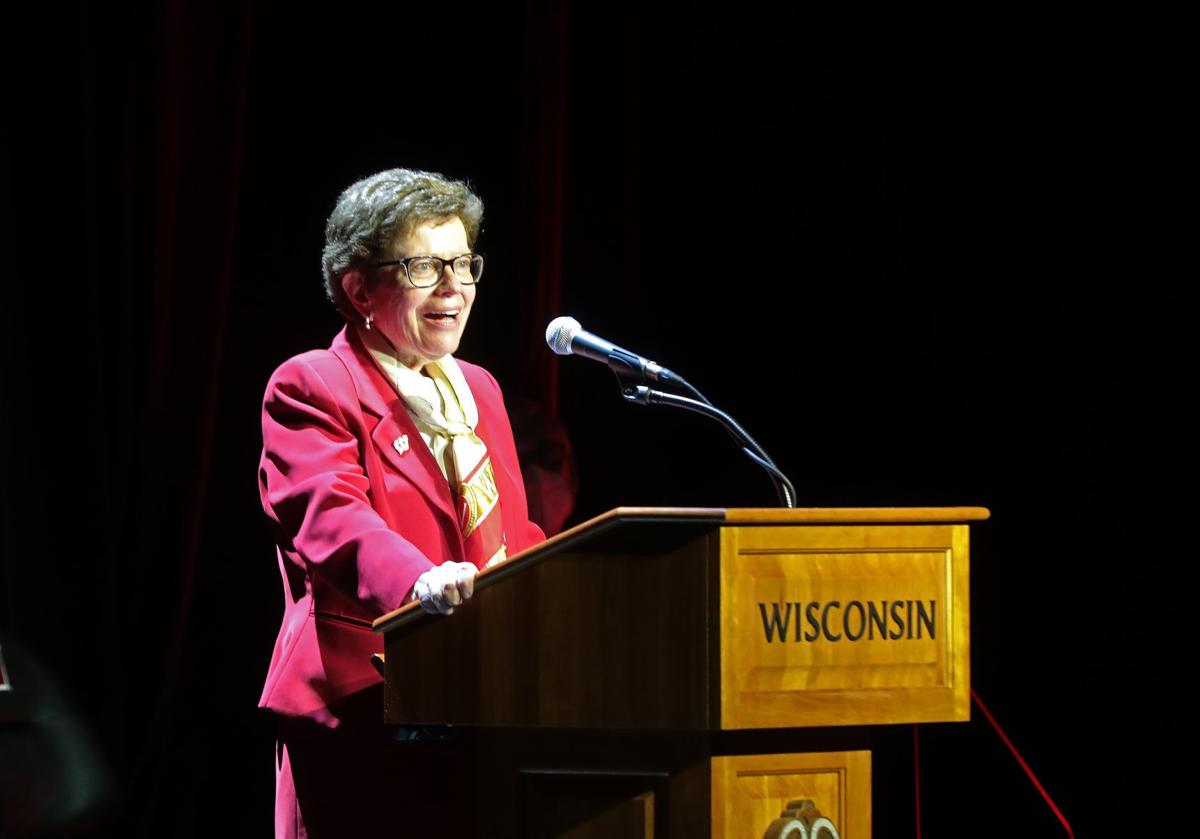 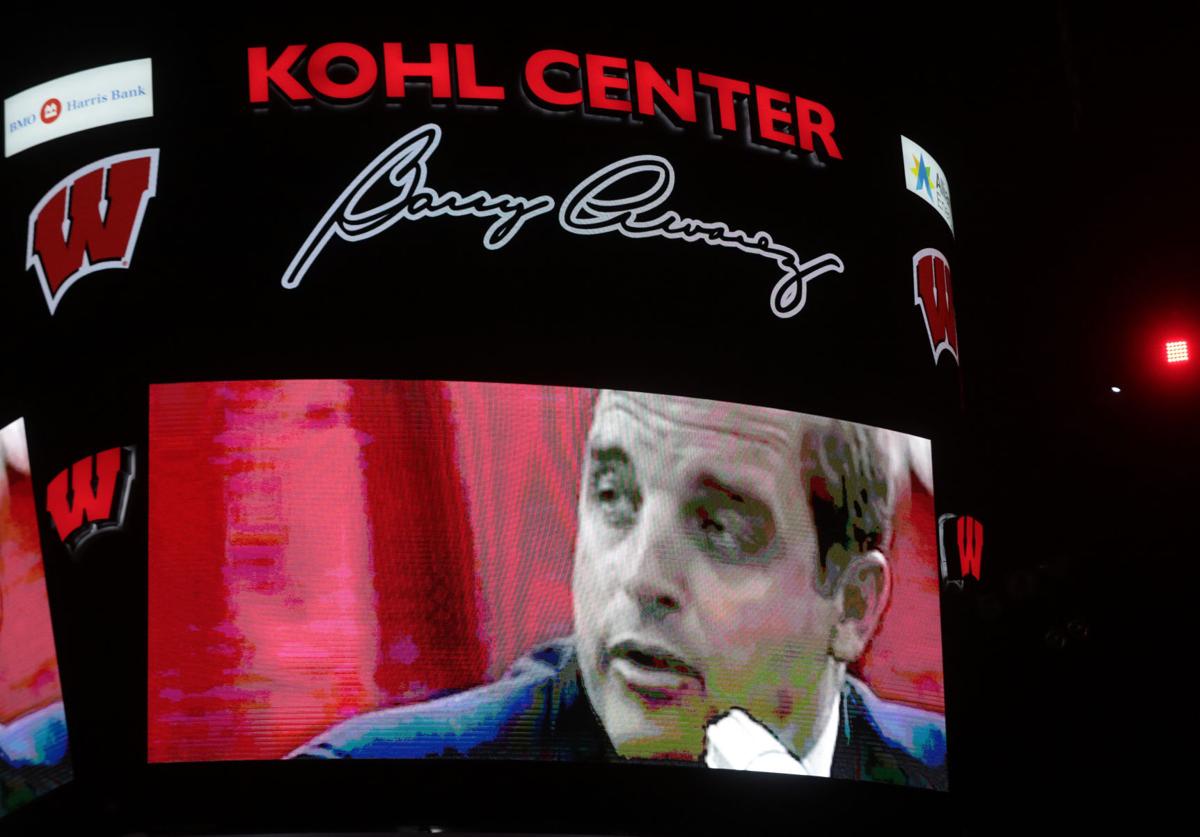 A video presentation Tuesday showed an image of Barry Alvarez's early days as head football coach for the Badgers.

The search for the next University of Wisconsin athletic director officially is underway, and UW-Madison Chancellor Rebecca Blank made it clear she understands the magnitude of finding the right person to replace Barry Alvarez.

“Leadership matters for maintaining the culture and the ethos and the quality of programs we have here,” Blank said Wednesday, one day after Alvarez announced he’ll be retiring this summer. “And if we get it wrong, we will not maintain that and that would be at a very high cost to our students, to our university, to the state.”

The job will be posted until April 28, at which time a nine-member search committee appointed by Blank will begin sorting through candidates in an attempt to narrow the field.

UW Athletic Board chair Pete Miller will lead the committee, which includes Badgers football coach Paul Chryst. Miller said the process will be “thorough” and that he hopes a hire can be made “within a few months.”

Alvarez said Tuesday his final day will be June 30, but Blank said she doesn’t necessarily view that day as a deadline by which to make a hire.

“I want the right person,” she said, “as opposed to a fast search.”

Blank last fall began a four-year term representing the Big Ten Conference on the NCAA Board of Governors. She said she has reached out “to people in college athletics who have broad networks, both inside and outside the Big Ten,” in an effort to advertise the position.

“I want a very strong and diverse pool” of candidates, she said.

UW unveiled a comprehensive “search prospectus” Wednesday morning that included details on what it is looking for in its next athletic director.

Under “principal duties” for the position, it says the role requires someone who “develops and sustains a departmental culture that values diversity and inclusion, including such areas as recruitment, hiring and programming.”

Alvarez considered his coaching background a plus as he made the transition to leading an athletic department. These days, more and more director roles are being filled by people with a background in business.

The key, Blank said, is finding someone who can navigate both worlds during a time of immense change in college sports.

Want to be Wisconsin's next athletic director? Here are the qualifications UW requires for Barry Alvarez's successor

A “special meeting” of the Athletic Board was held late Wednesday morning in closed session. UW spokesman John Lucas said the justification for doing so was “related to discussion of both the performance of (Alvarez), as it relates to the search for his successor, and the discussion of specific individuals who could be candidates for the position.”

That would seem to include one obvious internal candidate: UW deputy athletic director Chris McIntosh, who has been groomed by Alvarez for the job.

Blank was asked if she has concerns that the selection of a candidate publicly supported by Alvarez would be viewed as a rubber-stamped decision.

“As far as I can see, for every other athletic director search that has happened around this university, the process has been the following: The chancellor threw open his or her door and announced the candidate,” she said. “I have (put) a serious search committee together with a great chair. I’ve already made calls to a number of people around the Big Ten and elsewhere saying, ‘If you know good people, encourage them to be part of this search.’ We’re doing a national search and we’re going to look for the best candidate.”

Alvarez, according to Blank, will provide “advice and commentary” during the search process only when asked, but the search committee includes several people with close ties to him.

Members include Ted Kellner, a Milwaukee-area businessman, major donor to the university and one of Alvarez’s best friends.

Barry Alvarez chooses laughs over tears during 'day of celebration'

Also on the committee are three Alvarez hires: Chryst, softball coach Yvette Healy and Alando Tucker, who worked in administration before moving into an assistant coaching role with the men’s basketball program.

Another committee member, Jeff Mack, played under Alvarez and now works in business development at Park Bank in Madison.

The other members of the committee are Elzie L. Higginbottom, a Chicago businessman and former UW men’s track and field standout; UW Department of Obstetrics and Gynecology chair Laurel Rice; and UW student-athlete advisory committee chair Eden Rane, a member of the lightweight rowing team.

Miller said the group’s mission is to pass along a group of qualified candidates — he estimated three to five finalists — from which Blank could choose.

The Wisconsin State Journal is providing our readers with comprehensive coverage of Barry Alvarez's retirement from his position as athletic director at the University of Wisconsin.

From a look back at Alvarez's football coaching days and the changes the department has made since he came to Madison in 1990, to an examination of what lies ahead in the university's search for a successor, we have you covered with all the latest updates and in-depth analysis of this landmark moment in Badgers history.

To continue to support journalism like this and gain full access to all of our Badgers' coverage throughout the year, please consider a digital subscription. To all of our current subscribers, we thank you for your continued support of local journalism!

Barry Alvarez, 74, will finish his term leading the UW athletic program this summer after a 17-year stretch in the seat during which the department's budget nearly doubled.

Replacing Barry Alvarez as the University of Wisconsin’s athletic director will be both a tremendous opportunity and challenge.

Watch now: Barry Alvarez had plenty to celebrate at Wisconsin

With Barry Alvarez announcing his retirement as athletic director at the University of Wisconsin, take a look back at some of the biggest cele…

Sweeping changes are coming to college athletics in the form of NIL payments and athlete empowerment. UW's next AD has to take those challenges head-on.

Watch as UW celebrates Alvarez's 31-year Badgers career with "Thanks Coach! Celebrating Three Decades of Excellence" at 12:30 p.m. at the Kohl Center.

Final countdown: Breaking down Barry Alvarez's career by the numbers

In Barry Alvarez's three decades with the University of Wisconsin, from his time as head coach of the football program through his tenure as a…

Barry Alvarez disclosed that a search committee to find the next athletic director will be led by Athletic Board chair Pete Miller.

Wisconsin says farewell to Barry Alvarez in the latest cartoon from Phil Hands.

"For Wisconsin football and Wisconsin athletics in general, he's put the ‘W’ on the map.”

Barry Alvarez chooses laughs over tears during 'day of celebration'

“There’ll be plenty of time for me to get emotional,” the UW athletic director said.

The coach-turned-athletic director turned around the fortunes of the football team and solidified the bottom line.

Thanks for the memories: Share your thoughts on Barry Alvarez's time at Wisconsin

With Alvarez announcing he'll be retiring as UW's athletic director June 30, we thought now's the perfect time to ask our readers what they think of his impact over 31 years in Madison.

Want to be Wisconsin's next athletic director? Here are the qualifications UW requires for Barry Alvarez's successor

The University of Wisconsin is looking for a proven leader and decision-maker to succeed Barry Alvarez as its athletic director.

Starting next season, major college football and basketball players will be permitted to transfer one time before graduating without being required to sit out a year of competition.

"For Wisconsin football and Wisconsin athletics in general, he's put the ‘W’ on the map.”

A video presentation Tuesday showed an image of Barry Alvarez's early days as head football coach for the Badgers.