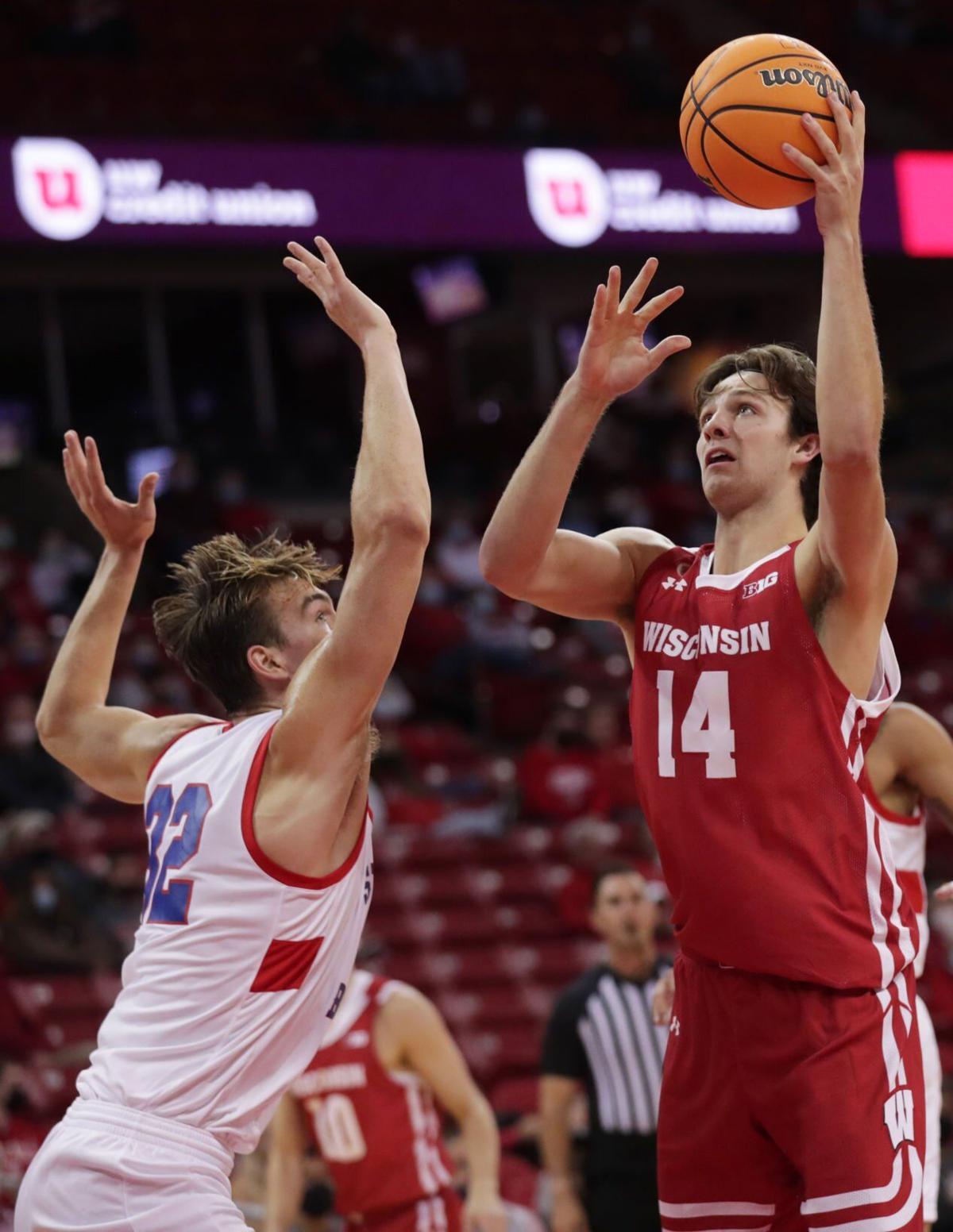 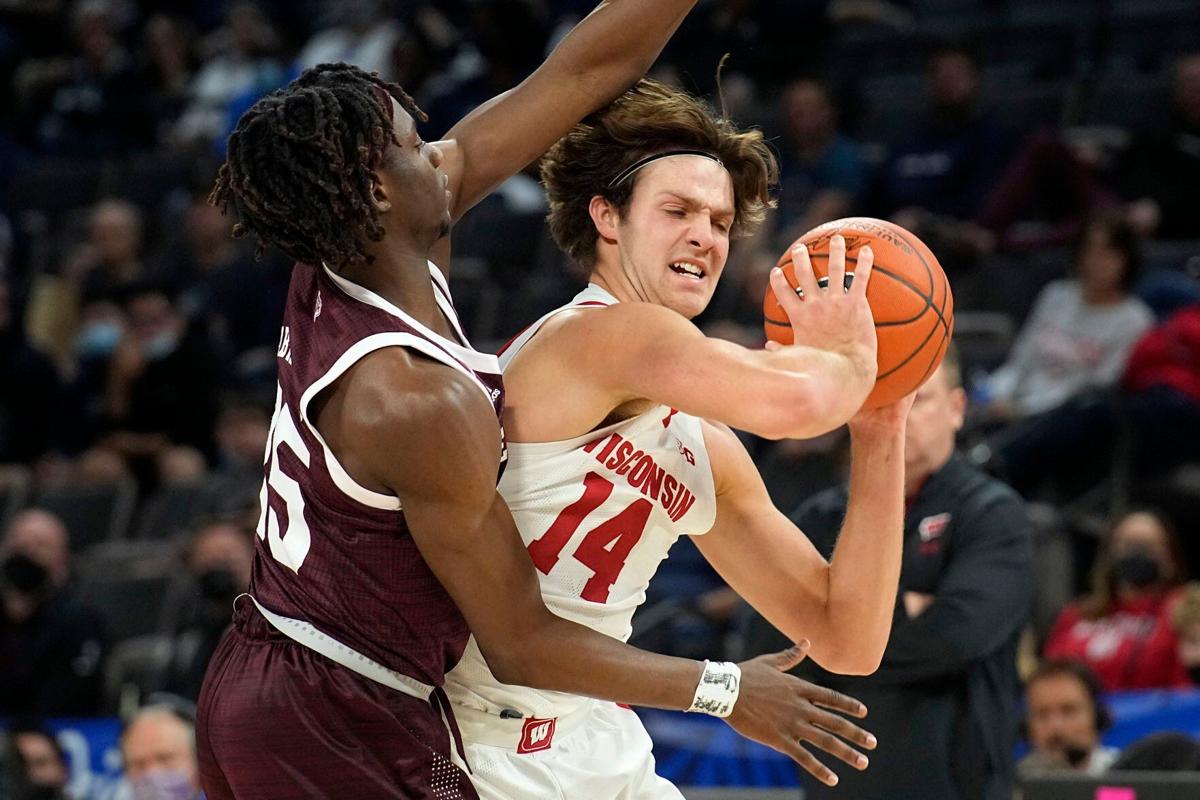 Carter Gilmore spent a lot of time watching from the sidelines a season ago.

The 6-foot-7 forward from Hartland had joined the University of Wisconsin men’s basketball team as a preferred walk-on despite multiple Division I offers from smaller schools. He knew he wasn’t likely to get playing time, so he tried to find other ways to stand out during a season in which he appeared in just eight games for a total of 16 minutes.

Open Jim: Where would Johnny Davis' season rank among recent great ones for Wisconsin men's basketball?

This included helping his teammates from where he was on the bench.

Gilmore said one of his biggest assets is his observation skills. He noticed something off about Tyler Wahl’s game when the Badgers were playing Penn State last season.

So when Wahl sat down next to Gilmore after twice kicking the ball out to teammates instead of driving to the basket, Gilmore encouraged him to be more aggressive and get into the paint.

“I remember he went in there two possessions later, did the move and got a bucket,” Gilmore said. “That was just when we kind of looked at each other and gave each other a smile.”

Gilmore has been one of the Badgers’ biggest surprises this season.

The sophomore earned a scholarship in the spring and is averaging 10.3 minutes per game. He’s only missed one game this season when he was out against Ohio State due to the flu.

The Badgers play the Buckeyes again at 6 p.m. Thursday at the Kohl Center.

Gilmore is averaging 1.2 points and 1.2 rebounds per game, but his teammates and coaches have called him one of their most important players off the bench this season.

“There’s a lot more I can do, but I’m definitely more confident,” Gilmore said. “I know all the guys kind of say it to me each game to look for my shot more, be more aggressive in practice, I’m one of the best players they say they have to guard on the scout team. So I give myself maybe about a C. I can work a little harder, play a little harder, and then just play more confidently and look for my shot more. And I think that’ll help my team.”

The Badgers split into two units during practices — the scout team and first team. The scout team typically is composed of players who have walked on to the program, redshirt players and anyone who isn’t typically in the rotation for a game. Their task is to emulate the upcoming opponent’s plays to prepare the first team for what it will face in the game.

The first team is made up of players who are key rotational pieces. It focuses on learning plays and getting ready for the upcoming opponent by playing against the scout team.

Gilmore has been the first player off the bench at least twice this season but still is splitting time between scout team and first team during practice.

“On the scout team, it helps me get more confidence on the offense and being able to do more than I would on the first team,” Gilmore said. “It’s pretty tough to go over there and they’re running plays and putting in new plays. When you’re over on the scout team, you don’t get to learn that as well. So having to keep up with the new plays that they’re putting in and learning the opponents’ plays as well gets pretty tough.”

While his other rotational teammates focus on learning new schemes and tightening up areas, Gilmore has to split time learning both the scheme of the opposition and the Badgers. That balance has been one of the most challenging parts of the season. He gets thrown into games a little less prepared than his teammates but is expected to be just as consistent.

“It’s all about being good at the little things,” UW coach Greg Gard said. “Carter has understood that. His body has improved over the offseason. It can still take another jump, but he’s just solid, he understands what we want. He’s juggling a lot, but he’s learning and growing and trying to get better.”

Gilmore played 19 minutes in the Badgers’ upset of then-No. 3 Purdue last week and defended center Zach Edey and forward Trevion Williams during the last few minutes of the game after Wahl, Steven Crowl and Chris Vogt fouled out for the Badgers.

“He’s always had a chip on his shoulder,” Wahl said. “He’s a hard worker. To see him get out there and play some meaningful minutes was really, really impressive from a kid who (was) looked at as just a walk-on last year. I’m really happy for him this year.”

Gilmore’s transition from seldom-used walk-on to consistent minutes off the bench has helped the Badgers win 13 of their first 15 games.

“I know I can help the team,” he said. “I didn’t really know the situation I would be in walking on. It was really just coming here and seeing if I was even good enough to play here. Getting here and then doing it every day in practice has helped me kind of realize more and more each day that I belong here, that I can play with the best of the best.”

Lunardi has eight Big Ten teams making his 2022 bracket, and the Badgers would be in the East bracket with Duke as the top seed.

His projection hasn’t been updated since Friday morning, so it doesn’t include UW’s win over Maryland into its formula. Ohio State is a five-seed in Lunardi’s projection, so UW could help itself by defending its home court this week against the Buckeyes.

Palm is as high on the Badgers as any national analyst, and UW ranks seventh in CBS’ Top 25. UW’s win at Purdue knocked the Boilermakers off the No. 1 line in Palm’s projections, which were updated Friday.

UW was a four seed in Palm’s first projection this season.

What do you think of his tournament field? 👇 pic.twitter.com/4XAj72ETR4

UW is on the five line along with Illinois. Only three Big Ten teams are higher than the Badgers and Illini in DeCourcy’s projection.

UW was No. 24 in the NET rankings Monday, down two spots from last week.

The NET rankings replaced RPI as the key evaluator for teams during the season and the tournament selection process.

Here’s a primer on how the NET Rankings are calculated:

The NET Rankings are used to determine in which quadrant a game falls for a team. This gives teams credit for playing, and beating, strong opponents, especially on the road. The breakdown is as follows:

Northwestern officials removed a Badgers fan from Welsh-Ryan Arena after he made racist and vulgar gestures during the game.

The Badgers are now the second-highest ranked Big Ten team.

TV information, potential starting lineups and things to know about the Wildcats to prepare you for the men’s basketball team’s game against Northwestern

Wisconsin’s chancellor and athletic director said the Badgers will prohibit the inappropriate fan at the Northwestern game from purchasing tickets through UW’s platform.

Two sets of brothers were deciding where to play next in the late spring of 2019. How one set of siblings saying no to the Badgers ended up being a blessing in disguise because it led to Wisconsin landing Johnny and Jordan Davis.

The 8th-ranked Badgers had five players score in double figures as they held off the Wildcats 82-76 to improve to 6-1 in Big Ten play.

A game-high 25 points from Johnny Davis wasn't enough to extend the Badgers' seven-game winning streak as No. 8 UW fell to No. 14 Michigan State 86-74 in a Big Ten battle at the Kohl Center.

The junior forward was injured in the Badgers’ victory over Northwestern earlier in the week. Here’s what we know.

The Badgers’ defensive statistics have slipped as they’ve risen in the national rankings. Here’s why that’s expected but also what the team says still can be ‘improved a lot.’

The game was scheduled for Jan. 25, but health and safety protocols within the Cornhusker program caused the game to be rescheduled.