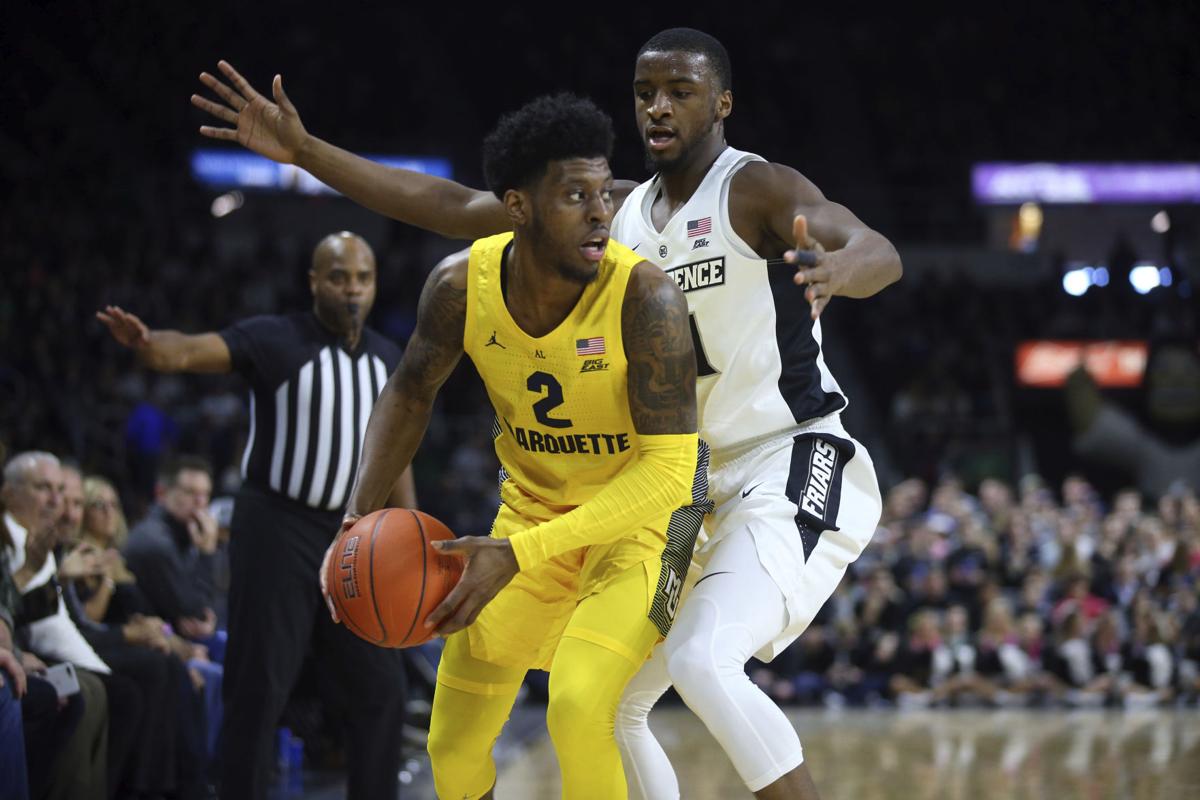 Marquette's Sacar Anim (2) is defended by Providence's Alpha Diallo, right, during the Golden Eagles' 84-72 loss on Saturday at Providence, R.I. 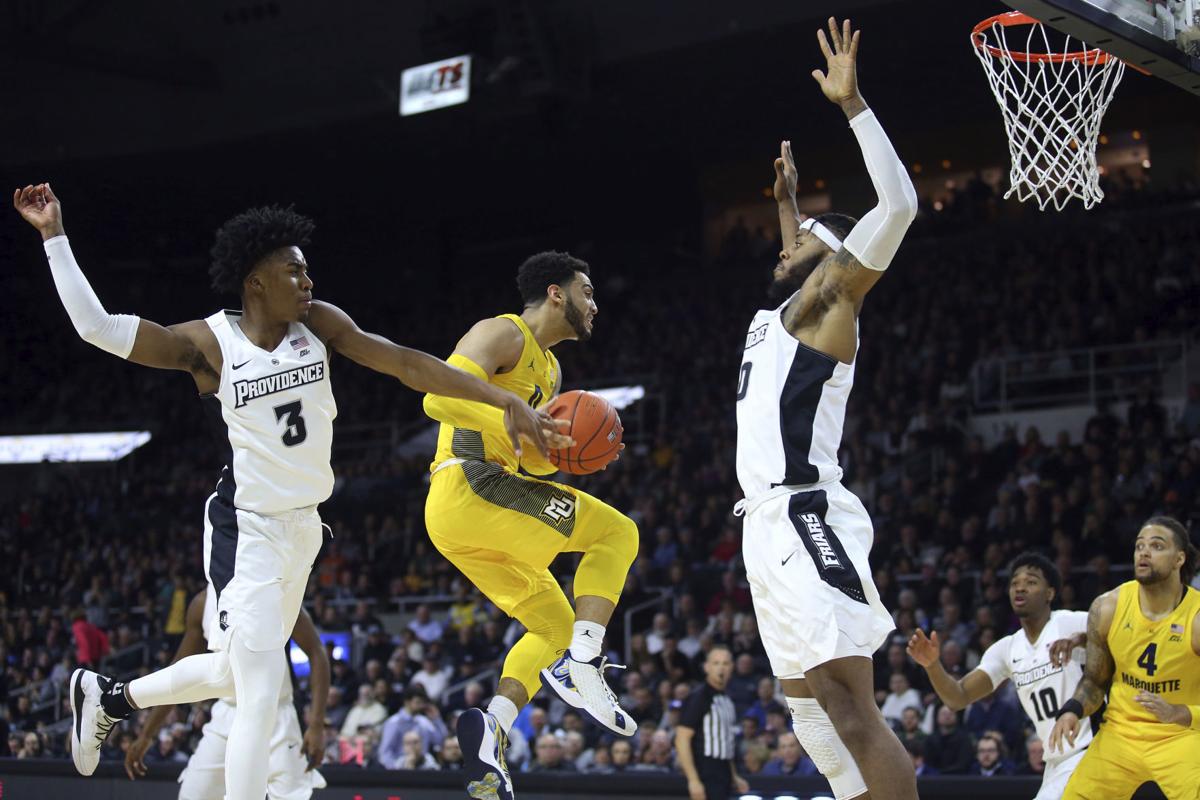 Marquette's Markus Howard, center, splits through the defense of Providence's David Duke (3) and Nate Watson (0) during the Golden Eagles' 84-72 loss on Saturday at Providence, R.I.

PROVIDENCE, R.I. — Providence coach Ed Cooley knew after his team lost three straight nonconference games at the end of November that the Friars would have little room for error when the Big East schedule came around.

The best way for Providence to play its way back into NCAA Tournament contention after early losses to Pennsylvania, Long Beach State and Charleston: beating ranked teams such as Butler, Creighton, Seton Hall and Marquette.

“There’s no more desperate team in America than Providence College,” Cooley said after an 84-72 victory over No. 19 Marquette gave the Friars their fourth straight win over a team in The Associated Press Top 25.

“We started 1-3 and we didn’t give up then. I don’t see why we’d give up now,” coach Steve Wojciechowski said. “Losing’s going to happen. We’ve got to figure out how we can get our mojo back so we can win some games.”

AJ Reeves added 11 points for Providence, which held a double-digit lead for all but 39 seconds of the game’s last 26:29. Howard scored 19 of his points after the Golden Eagles trailed 71-50 with 5:13 to play.

“I’m really happy I’ll never see him in this building again,” said Cooley, who noted that Howard scored 52 at Providence two seasons ago. “I’m just glad we’re done with him until hopefully the Big East finals.”

Howard shot 10 for 25 from the field and had just one assist for Marquette, which had four assists and 18 turnovers in all.

Providence led by as many as 17 in the first half thanks to its 3-point shooting (8 for 15) and 17 points from Pipkins. Marquette cut the lead to nine, 52-43, midway through the second before the Friars scored six straight points and the Golden Eagles never got within single digits again.

It was 62-50 when Providence scored nine in a row, the last five on a basket and a three-point play by Duke.

“I thought that was game,” Cooley said. “There just wasn’t enough time on the clock, even with Superman on the other team.”

Pipkins, a graduate transfer from UMass, had one point and zero assists at Marquette on Jan. 7, when the Friars won 81-80 in overtime.

“He was in foul trouble in our place, so we didn’t see the real Pipkins,” Wojciechowski said. “A lot of times when you transfer, it takes a while to get used to your role.”

The Friars have won three straight overall and have beaten then-No. 16 Butler, then-No. 21 Creighton and then-No. 10 Seton Hall since Feb. 1.

“It’s a long road but it comes fast,” said Providence forward Kalif Young, who scored 10 points. “You’ve got to understand that every game counts. We’re in the stretch, so every game counts even more.”

Marquette: The Golden Eagles dipped into The Associated Press Top 25 at No. 18 on Feb. 10 and have lost three in a row. Though the first two were to higher-ranked teams Villanova and Creighton, the loss at Providence will certainly drop them out of the rankings

Providence: The Friars are fourth in the Big East and the top unranked team in the conference. They are 4-4 against ranked teams this season and have beaten four ranked teams for the first time since 2015-16. They beat seven ranked teams in 1972-73.

“They’re playing like a desperate team,” Wojciechowski said. “Ed’s done a great job of rallying his team since the nonconference.”

Providence: At No. 12 Villanova on Saturday.

Bucks try to make sure they're ready whenever season resumes

Case's, St. Catherine's and Prairie's games tonight will all be affected.

Two decades ago, the rafters at the Kohl Center could best be described as barren.

Editor's note: A panel of Associated Press sports writers voted in March 2020 on the top 10 men's basketball games in the history of the NCAA …

Editor's note: A panel of Associated Press sports writers voted in March 2020 on the top 10 men's basketball games in the history of the NCAA …

Knowing when the rescheduled Tokyo Olympics will be solves one problem for USA Basketball.

The documentary looking at Michael Jordan’s last championship season with the Chicago Bulls is set for release nearly two months sooner than expected with no sports to air due to the coronavirus pandemic.

Marquette's Sacar Anim (2) is defended by Providence's Alpha Diallo, right, during the Golden Eagles' 84-72 loss on Saturday at Providence, R.I.

Marquette's Markus Howard, center, splits through the defense of Providence's David Duke (3) and Nate Watson (0) during the Golden Eagles' 84-72 loss on Saturday at Providence, R.I.