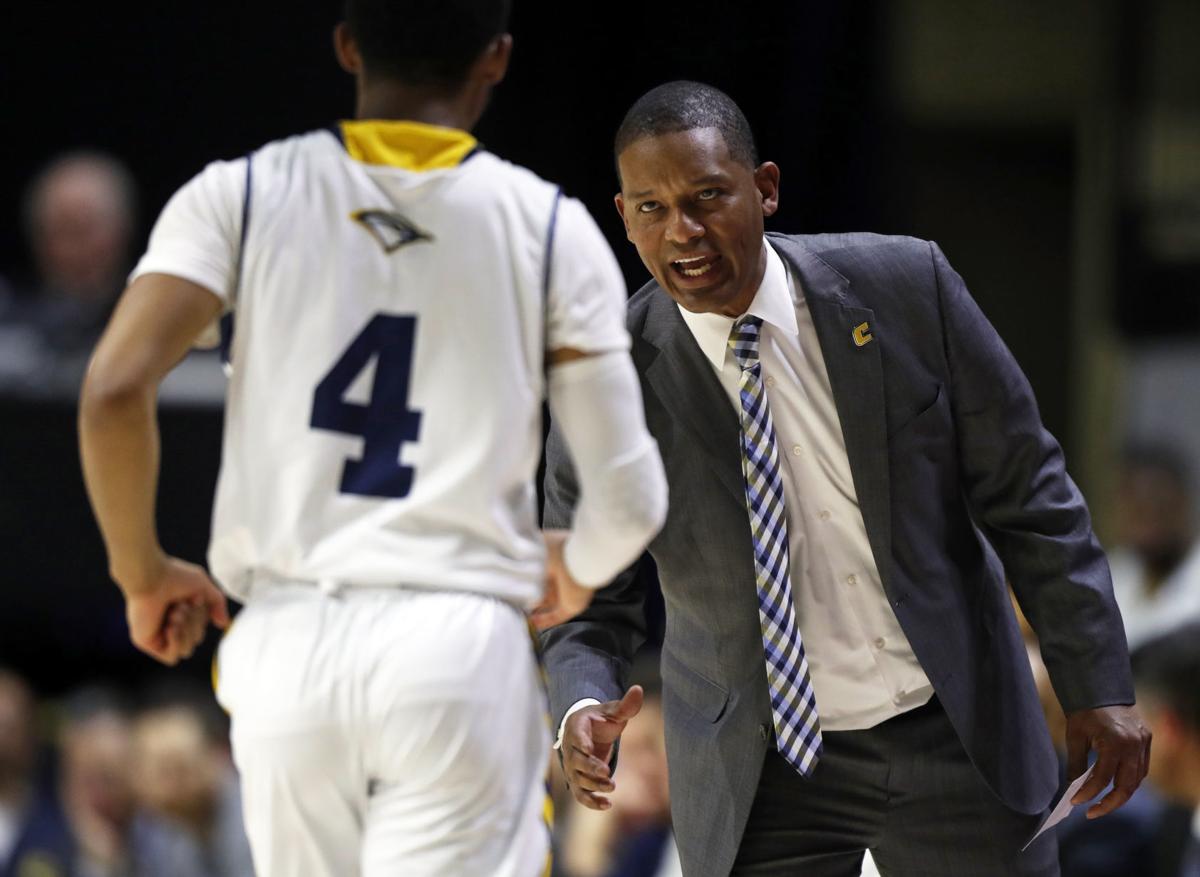 Chattanooga coach Lamont Paris, talking to guard Maurice Commander during a 2019 game against Wofford, was an assistant at UW from 2010-17. 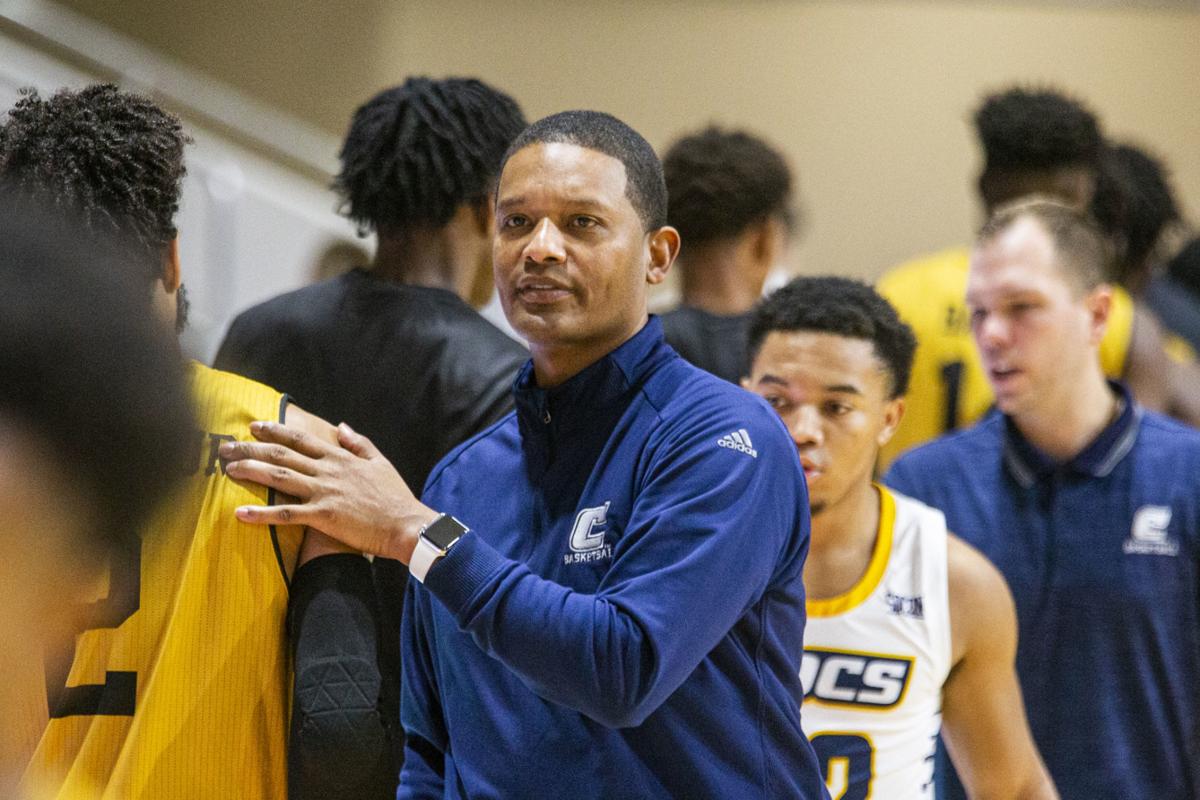 Lamont Paris became the 20th coach in Chattanooga history on April 4, 2017. The Mocs have qualified for the NCAA tournament 11 times — most recently in 2016 — and recorded three victories in 14 games.

Lamont Paris knew it wasn’t going to be easy.

Oh, sure, the former assistant coach for the University of Wisconsin men’s basketball team took over a Chattanooga program that had won 19 games the previous season and had a history of success. But as Paris dove into his first head-coaching gig in the spring of 2017, he understood he was going to have to essentially rebuild a roster that had lost six seniors.

That was one challenge. Another was a bit more unforeseen and involved establishing an academic culture within the program while being handcuffed, he says without going into specifics, by the task of reshaping a roster without incurring penalties within the NCAA’s Academic Progress Rate system.

It’s complicated, but it should be noted Paris spent as much time talking about success in the classroom as he did success on the court during an interview last week. One item he shared with pride: His Mocs have posted a cumulative GPA of more than 3.0 in each of the past two semesters.

“The great thing about that is once you get over the hump of that,” Paris said, “you feel much better.”

Paris received a two-year contract extension last September despite the fact he was coming off back-to-back losing seasons. Which brings us to another challenge Paris encountered during his first year in Tennessee: The man who hired him, David Blackburn, retired as Chattanooga’s athletic director two months after Paris had signed on with the Mocs.

Blackburn was replaced by Mark Wharton. The good news for Paris was Wharton had worked in Penn State’s athletic department and certainly was familiar with the Badgers’ run of success.

Paris said he’s developed a great relationship with Wharton, who rewarded his coach before, to use Paris’ phrase, the Mocs had gotten over the hump in terms of wins and losses.

That step came this past season, when Chattanooga went 20-13 and nearly got the chance to play for the Southern Conference tournament title. The Mocs were beaten on a buzzer-beater in a semifinal against Wofford.

Still, the season represented a significant turnaround for Paris and Co. Chattanooga was one of 88 teams to lose at least 20 games during the 2018-19 season. Seven of those teams won 20 games the following season — the Mocs, Boise State, Colorado State, Illinois, Little Rock, Richmond and West Virginia.

Chattanooga’s overall win total has improved every season under Paris, from 10 to 12 to 20. Its conference win total has steadily climbed from three to seven to 10. It finished a respectable 147th in the KenPom ranking and 153 in the NET this past season.

“To be completely honest with you, I probably couldn’t be any more pleased,” Paris said. “I think we hit our stride this past season about midway through and we had a couple guys that really started playing well and finished off the season well.”

Paris, 46, experienced NCAA basketball on every level prior to becoming a head coach. He’d played at the College of Wooster, a Division III program in Ohio. He’d been an assistant at the Division II and III levels, at a Division I mid-major (Akron) and, for seven seasons with the Badgers, at a high-major program.

What Paris never really had experienced was losing like he did that first season at Chattanooga, when the Mocs finished in last place in the conference with a 3-15 record.

But Paris remained patient and stuck to his plan. He’s established his own identity while also relying on all the knowledge he’s soaked up over the years from mentors. That group includes his college coach, Steve Moore, who recently retired after posting 867 wins over nearly four decades at the Division III level; Keith Dambrot, who was Paris’ boss at Akron; and the two men he worked under at UW, Bo Ryan and Greg Gard.

“I wanted our culture to mimic Wisconsin’s precisely because I don’t think there’s a better one out there,” said Paris, whose staff includes former UW player Tanner Bronson. “How we play (at Chattanooga) and some things that we do are completely different in some ways, but just the belief in principles and the belief in high-quality individuals (is similar). Some of the stuff we’ve done here academically has been mind-blowing relative to what’s been done here in the past. Those are things that I wanted to implement.”

Paris and Gard text throughout the season and talk when their schedules allow. Ryan, from his winter home in California, keeps close tabs on the Mocs and sends words of encouragement, according to Paris.

Paris has spent a unique offseason plugging holes on his roster. Among the losses was former Sun Prairie athlete Rod Johnson Jr., who left for Western Illinois as a graduate transfer. But Paris has added two transfers and hopes to add at least one more to a team that he believes will be even better than the 2019-20 version.

“I’m really proud of what we’ve done and looking forward to improve next year and continue to get better,” he said. “At some point you’re not going to be able to improve on what you did the previous year (in terms of win total). But I hope that’s a few years down the road. I think we’ve got a chance to be really good next year.”

Alex Marzette simply isn't going to take no for answer.

Jerry Sloan, the coach who took the Utah Jazz to the NBA Finals in 1997 and 1998 on his way to a spot in the Basketball Hall of Fame, died Friday. He was 78.

"The Last Dance" was superb entertainment - a 10-hour starburst of nostalgia that showcased the 1997-98 Chicago Bulls in general and iconic basketball player Michael Jordan in particular. But the series focused its Jordan-centric lens only through June 1998, when Jordan was 35 years old and once again standing at basketball's mountaintop. Jordan is 57 now. But the ESPN documentary only ...

Koreem Ozier is taking his game to the Deep South.

What can we learn from Jordan and 'The Last Dance'? Forget about what might have been and just stay in the moment.

If only life worked like film or fairy tale, with the ability to press stop - or at least pause - when the delight and exhilaration reaches its pinnacle.

What happened after 'The Last Dance'? A look back at the 1999 Bulls without Jordan, Pippen and Jackson.

CHICAGO - After the Bulls won their fifth NBA championship in 1997, Michael Jordan sat at the postgame news conference and fielded a question about a potential rebuild. "No one is guaranteed rebuilding in two, three or four years. The Cubs have been rebuilding for 42 years," he said, referencing their then-drought without a World Series appearance. A similar quip could be made about the Bulls ...

Chattanooga coach Lamont Paris, talking to guard Maurice Commander during a 2019 game against Wofford, was an assistant at UW from 2010-17.

Lamont Paris became the 20th coach in Chattanooga history on April 4, 2017. The Mocs have qualified for the NCAA tournament 11 times — most recently in 2016 — and recorded three victories in 14 games.