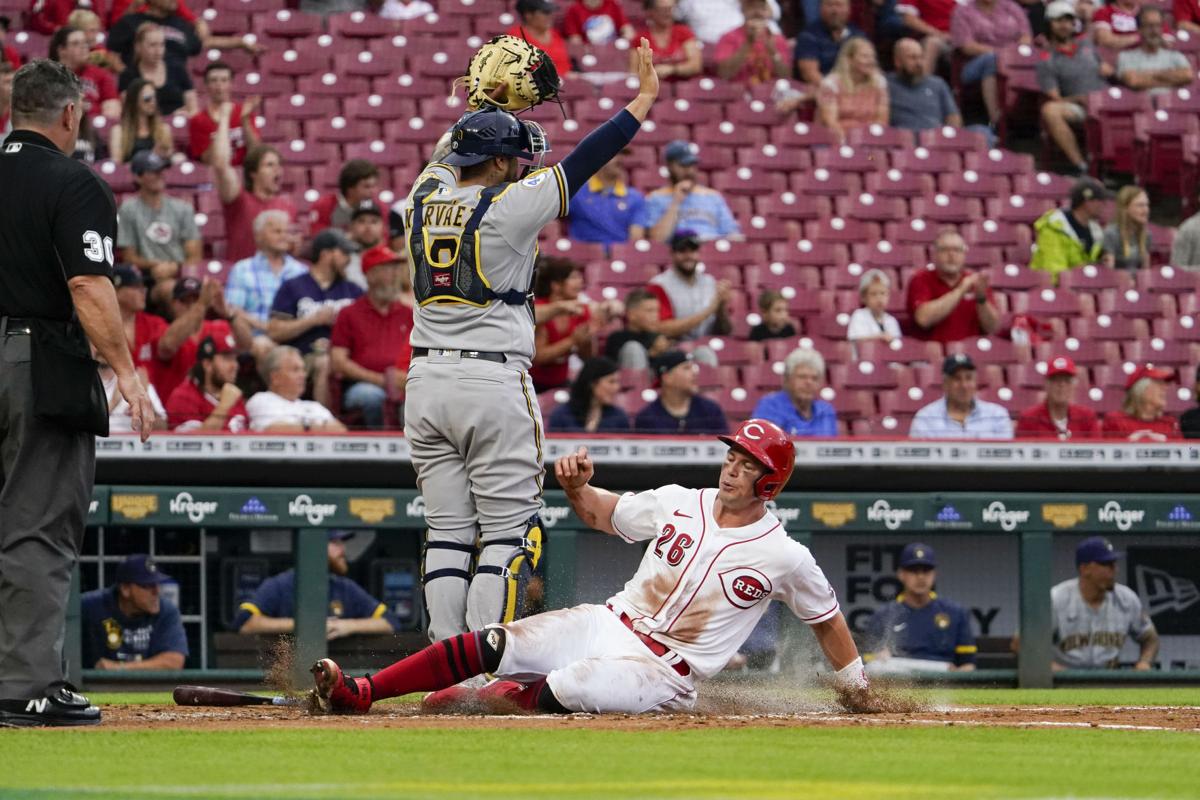 Reds' Scott Heineman scores on a single by Jonathan India as Brewers' Omar Narvaez motions to hold the baseball during the second inning Wednesday night in Cincinnati. 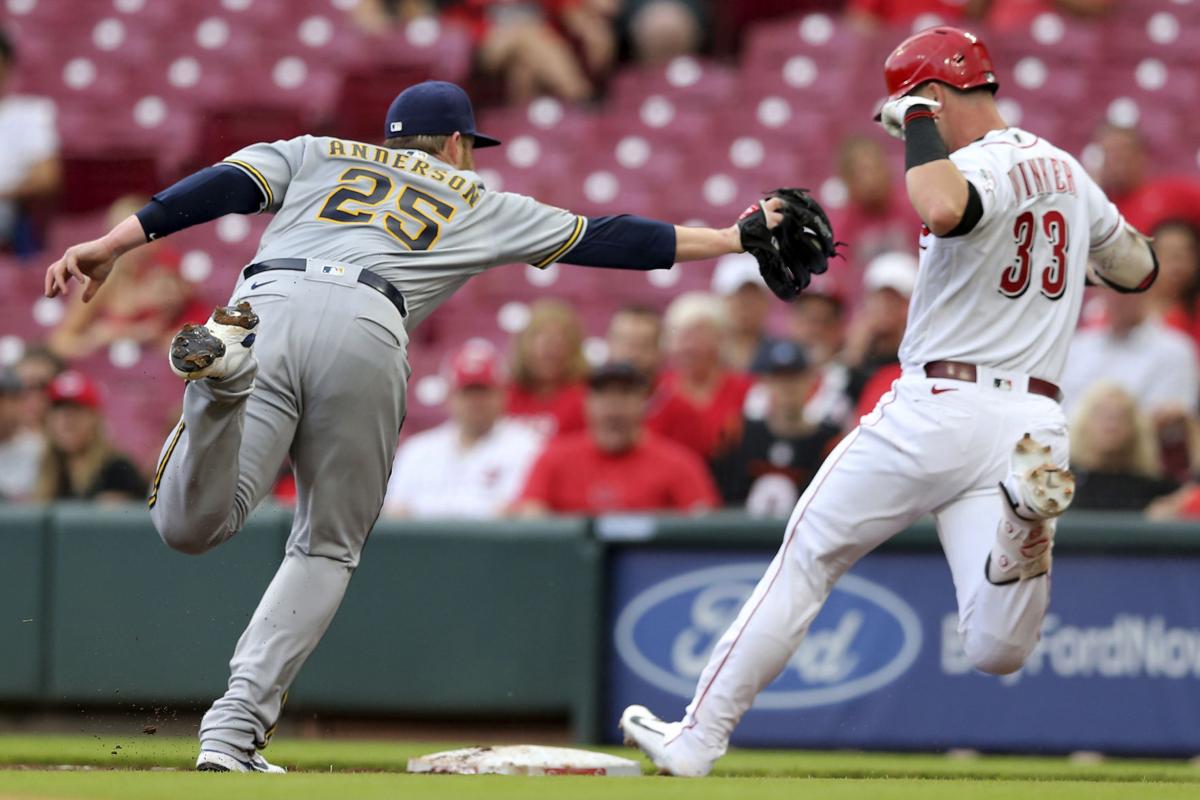 CINCINNATI — Vladimir Gutierrez settled down nicely after a tough start.

A conversation with a teammate helped.

Gutierrez (2-1) allowed two runs and six hits in the longest of his three big league starts. The right-hander struck out seven and walked three in his second straight win.

“All of my pitches that spin were working really well today,” Gutierrez said through a translator. “I was losing a little bit of confidence with my fastball to start, (but) I was able to mix them in really well with the rest of my pitches.”

The 25-year-old Gutierrez balked home a run in the first, and threw his glove in frustration after he returned to the dugout. Nick Castellanos then approached the rookie and told him he wanted him to go seven innings, and Gutierrez said OK.

“He gave me the confidence right there to get me through this game today,” Gutierrez said after the win.

Cincinnati backed Gutierrez with five runs in the first two innings. Stephenson doubled home Jesse Winker in the first, and Castellanos hit a two-run double in the second.

Stephenson made it 7-1 with a two-run double off Eric Lauer in the fourth, driving in Winker and Castellanos.

“The first inning I felt really good,” Anderson said. ”Got weak contact, some unfortunate events there. Made a terrible pitch to Castellanos (on) 3-2, and that was essentially the ballgame.”

Daniel Vogelbach hit a towering homer to right against Heath Hembree in the ninth. Christian Yelich then doubled, but Hembree struck out Avisaíl García and retired Manny Piña on a fly ball to right to end the game.

The Brewers dropped into second in the NL Central, a half-game back of the Chicago Cubs.

Gutierrez got a standing ovation after inducing an inning-ending ground ball from García in the seventh.

The worst bullpen in the majors needed the break. Five Reds relievers had surrendered all five runs in Tuesday night’s loss to the Brewers.

Brewers third baseman Travis Shaw had to be helped off the field after dislocating his left shoulder diving for a ground ball in the second inning. ... Milwaukee outfielder Lorenzo Cain (strained right hamstring) was working out on the field before the game, but manager Craig Counsell said July 1 is likely the earliest he could return.

Reds right-hander Sonny Gray was placed on the 10-day injured list after straining a groin muscle while warming up for the fourth inning Tuesday night. Manager David Bell said Gray likely will miss at least his next two starts. ... Cincinnati right-hander Jeff Hoffman (right shoulder) could be ready for a rehab assignment by the end of the month.

Right-hander Freddy Peralta, who came within five outs of a no-hitter in his last outing, starts against the Reds in the series finale on Thursday. Right-hander Luis Castillo gets the call for Cincinnati.

Unseasonably warm weather moved into the area over the last week and temperatures that climbed into the mid-90s seemed to be just the remedy for the Brewers' ice-cold offense.

Heading into their series finale against the Padres on May 27, the Brewers ranked near the bottom of the National League in just about every major statistical category and were especially futile with runners in scoring position.

Since then, though, Milwaukee's .226 team average ranks 10th in the NL (up from .209), and the Brewers' .471 slugging percentage — a number powered by a league-leading 21 home runs during that stretch — is second only to the San Francisco Giants with a .778 OPS that is good for third.

"It's been a pretty good run here," hitting coach Andy Haines said. "It's just been nice to put some runs on the board for our pitching because they've kind of been carrying us."

The recent offensive surge has been a welcome relief to Milwaukee's starting rotation, which continues to put up eye-popping numbers.

"I remember talking to you (reporters) maybe the first week of May and you asked ‘What are you guys going through right now with this tough stretch?’," Burnes said. "And I think I basically said, ‘Just hang in there.’ It’s one of those things in baseball — it’s going to come around. I think the last two weeks have kind of shown that."

An offense that gives starting pitchers a lead means little if the bullpen can't protect it and despite having lost two key options when right-handers Drew Rasmussen and J.P. Feyereisen were dealt to Tampa for shortstop Willy Adames, the Brewers' relievers have not let their teammates' efforts go to waste.

Closer Josh Hader (above) has been the biggest reason for that success. In five appearances during Milwaukee's recent hot streak, he hasn't allowed a single run while striking out seven of 17 batters faced and notching three more saves to give him 14 for the season.

"It seems like it's kind of the Brewers' formula when we win: we hit some homers and then get Hader into the game," Haines said. "I'm all-in on that."

"He’s just becoming more of an overall pitcher, and I think when you take that stuff and all the things that Josh brings, the unique delivery, the slot, all those things, and now the guy can throw three pitches at any time for a strike," pitching coach Chris Hook said. "I think that’s a formidable foe.”

Watch now: 5 of the Brewers' most eye-popping defensive plays so far this season

Reds' Scott Heineman scores on a single by Jonathan India as Brewers' Omar Narvaez motions to hold the baseball during the second inning Wednesday night in Cincinnati.