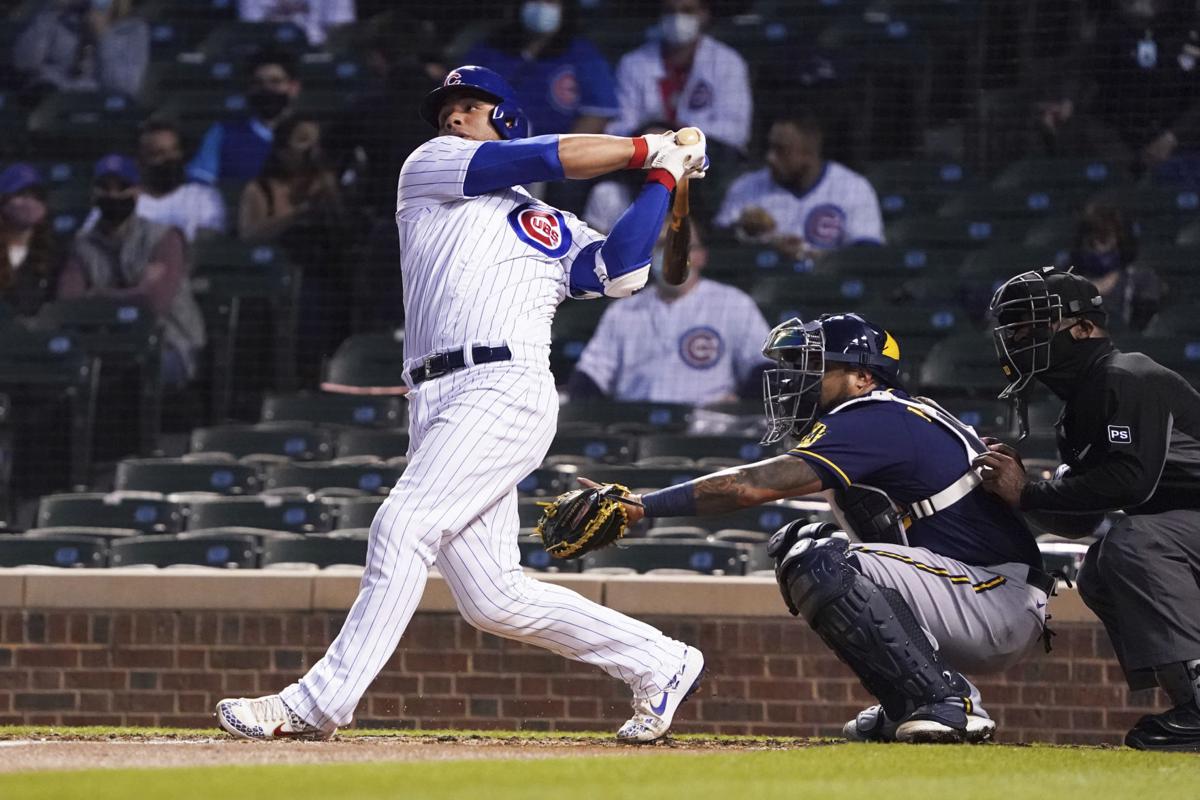 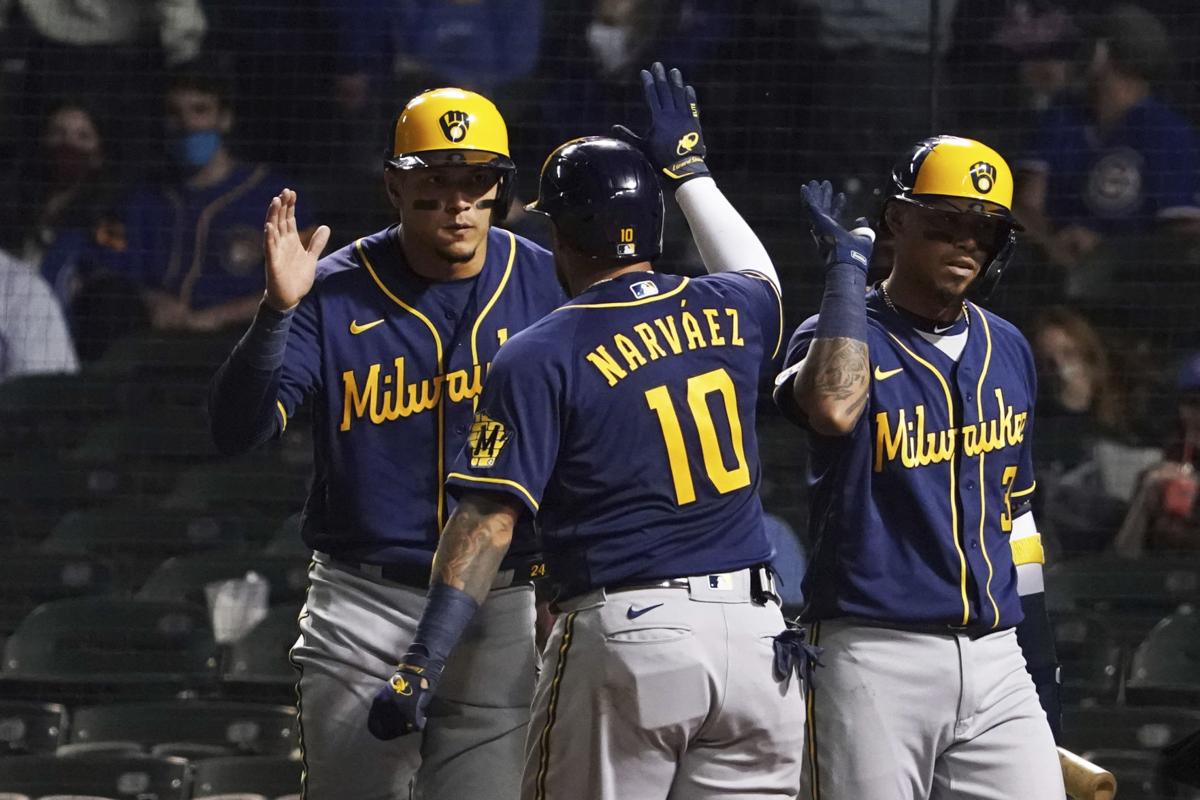 Omar Narvaez is greeted after hitting a three-run home run in the seventh inning to pull Milwaukee within 4-3.

CHICAGO — The Chicago Cubs turned on the power while the Milwaukee Brewers continued to struggle.

Willson Contreras, Javier Báez and David Bote homered during a four-run fourth inning to lift the Cubs over the Brewers 5-3 on Monday night at Wrigley Field.

Trevor Williams pitched perfectly until Omar Narváez’s leadoff single in the sixth — Narváez also broke up a no-hit bid in the eighth inning Saturday against Minnesota. Narváez added a three-run homer in the seventh for Milwaukee’s only runs.

Brett Anderson (0-1) allowed all of Chicago’s homers, giving up four runs and four hits over five innings while striking out four.

Neither team had a baserunner until the bottom of the fourth, when Ian Happ drew a leadoff walk from Anderson. Contreras came up next and knocked him home with a drive that just cleared the center field fence. Baez later homered to right-center, and Bote followed with a blast to deep center.

The Brewers have 39 strikeouts, 10 hits and five runs in their past 27 innings.

“We obviously need more runs,” manager Craig Counsell said, “but we haven’t gotten it so far.

Williams (1-0) was making his Cubs debut after five seasons with Pittsburgh. He pitched into the seventh, allowing two runs, two hits and two walks while striking out six.

Williams’ father Richard, a Chicago native and lifelong Cubs fan who once worked as an usher at Wrigley Field, was at the game to see his son play his first game for his favorite team.

“Pretty spectacular how he handled the moment,” manager David Ross said. “Nice for him to get off to a good start in a Cubs uniform.”

Williams was glad fans were allowed in the stands for what became a memorable day for his family.

“They’ve been looking forward to this moment for a long time,” he said. “Just a really special moment for my family and I. I’m thankful they were able to be in the stands for it.”

Alec Mills, who no-hit Milwaukee as a starter last September, pitched the ninth for his first save.

Chicago fans have been waiting almost 50 years to see a Cubs no-hitter at Wrigley Field. Milt Pappas last did so Sept. 2, 1972, in an 8-0 win over San Diego.

Valdez has not pitched in the majors. Norwood was designated for assignment in late March after appearing in three games for Chicago in 2020.

Brewers: The club announced that many players have received the single-dose Johnson & Johnson COVID-19 vaccine, but it did not disclose what percentage of players and staffers did so. Major League Baseball has announced it would relax protocols for teams that had 85% of their players and primary field staff vaccinated. “When it became available to us, a lot of us jumped on it,” said first baseman Keston Hiura, one of the players who received the vaccine. ... Manager Craig Counsell did not offer an update on assistant trainer Dave Yeager, who was hospitalized Saturday night after collapsing on the field while tending to umpire CB Bucknor. He added, however, he believes Yeager is doing well.

Cubs: Baez was struck near the right knee by reliever Eric Yardley in the sixth and Contreras took Devin Williams’ pitch off the front of his helmet an inning later. Both players remained in the game. ... Catcher Austin Romine (right knee soreness) left for the club’s alternate site in South Bend, Indiana. Manager David Ross said he expects Romine to get live at-bats there before he’s eligible to come off the 10-day injured list Thursday.

Omar Narvaez is greeted after hitting a three-run home run in the seventh inning to pull Milwaukee within 4-3.