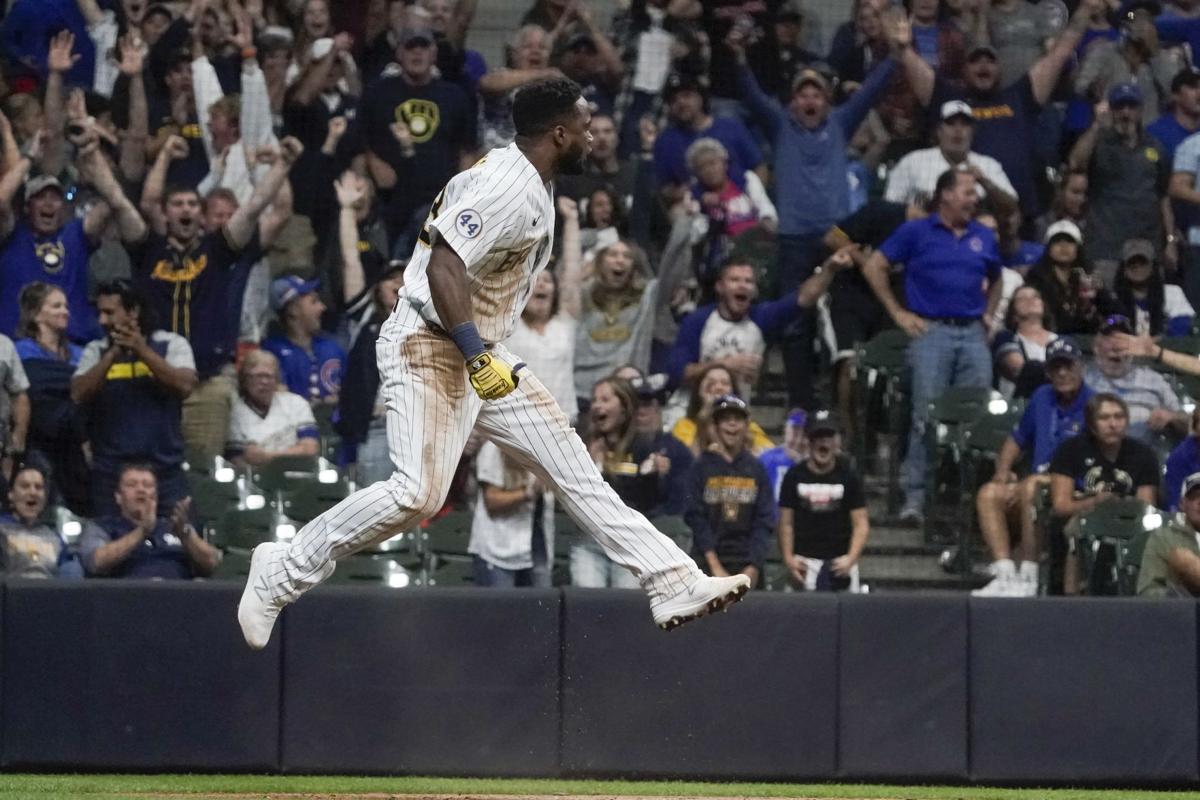 Brewers' Pablo Reyes reacts after scoring during the eighth inning Saturday night to give Milwaukee a two-run lead against the Cubs.

The Brewers won for the seventh time in nine games to ensure themselves at least a wild card after San Diego and Cincinnati lost earlier in the day. Milwaukee's magic number to lock up the NL Central title is three over St. Louis.

"There will be a little bit of celebrating tonight," said Brewers starter and NL Cy Young Award contender Corbin Burnes. "But the main celebration is going to be when we clinch the division."

Burnes was shaky by his standards in his first start since throwing eight innings in a combined no-hitter a week ago. He allowed three runs and six hits over six innings, striking out 11.

The right-hander gave up Ian Happ's 23rd homer with a man on in the fifth. It was the first homer allowed by Burnes since Aug. 6, when San Francisco's Brandon Belt took him deep.

"You're not going to be perfect every night, so sometimes that zero in the sixth is still a huge part of a game that helps you win a ball game," Brewers manager Craig Counsell said. "That's what he did tonight."

Piña, Milwaukee's backup catcher, scored the first run of the night when he sent Justin Steele's first pitch of the second inning to center. Escobar followed with a solo shot to lead off the third, snapping a 1-1 tie.

Burnes left the game with a 3-2 lead thanks to a solo home run by Peterson to lead off the sixth, but the Cubs tied it an inning later when Willson Contreras, who was robbed of a home run by Lorenzo Cain in the second, tagged Brad Boxberger for a two-out solo shot that made it a 4-4 game.

Piña struck again from the leadoff spot in the eighth, sending an 0-2 slider from Scott Effross (2-1) down the left field line. Kolten Wong added an insurance run later in the inning, driving in Pablo Reyes on an infield single.

Devin Williams (8-2) pitched a scoreless eighth and Josh Hader stranded a pair of runners in the ninth for his 33rd save.

Saturday marked the second straight night the Cubs' bullpen allowed an eighth-inning rally, but Cubs manager David Ross was impressed with the way his team kept pressure on Hader in the ninth, putting the go-ahead run in scoring position.

"We've given ourselves a chance to win both these nights," Ross said. "It hasn't turned out and it (stinks) for sure but for us to have (runners on) second and third with a chance to tie this thing up in the ninth, I was proud."

The loss was the Cubs' 11th in a row to the Brewers, who have won 15 of the first 18 meetings between the teams this season and sixth in a row at American Family Field where they are 1-6 in 2021.

Piña's multi-homer game continued an impressive run for the Brewers' backup catcher who took the took the field Saturday batting .310 (18 for 58) with five home runs and 22 RBIs over his last 22 games.

"He's turning in his best offensive season," Counsell said. "It's not been done with batting average but with power and home runs and driving in runs. He's having a tremendous season and tonight capped it off."

Were it not for the display on the video board, the 33,625 fans on hand Saturday night might not have even realized Milwaukee clinched a playoff berth.

There was hardly any celebration after Hader struck out Patrick Wisdom to end the game other than the usual post-game handshakes heading back to the dugout, but the muted response was by design as the Brewers opted to hold off until they've locked up the NL Central title, which they could do as early as Monday when the Cardinals come to Milwaukee for a four-game series.

"We've put the ability to win the division in our control," Counsell said. "That's our goal and we're sticking to that goal. We know that we're in the playoffs and everybody is thrilled with that, but we feel like we've earned the right to wait until we win this division."

Cubs infielder Nico Hoerner arrived in Milwaukee on Saturday and took part in batting practice but won’t be activated until Sunday, ahead of the series finale. Horner has been out since late July with an oblique strain. Manager David Ross plans to make Hoerner the everyday starter at shortstop in an effort to evaluate the progress of the 2018 first-round pick, who was limited to just 39 games due to injuries this season.

Brewers outfielder Avisail Garcia (back spasms) was held out of the lineup for a third straight game. Manager Craig Counsell had hoped to have Garcia back Saturday, but after an evaluation, the medical staff decided Garcia wasn’t at the point they’d hoped.

The rivals wrap up their season series Sunday with right-hander Adrian Sampson (1-2, 2.53 ERA) starts for the Cubs and left-hander Eric Lauer (6-5, 3.10) goes for the Brewers.

Watch now: 5 of the Brewers' most eye-popping defensive plays so far this season

Daniel Vogelbach became the eighth player in Brewers history to hit a walk-off grand slam when he cleared the bases Sunday against the St. Lou…

Smashing success: Brewers keep setting franchise records — and they're not done yet

It was a historic weekend for the Milwaukee Brewers as Corbin Burnes and Josh Hader combined to throw just the second no-hitter in franchise history.

Brewers' Pablo Reyes reacts after scoring during the eighth inning Saturday night to give Milwaukee a two-run lead against the Cubs.