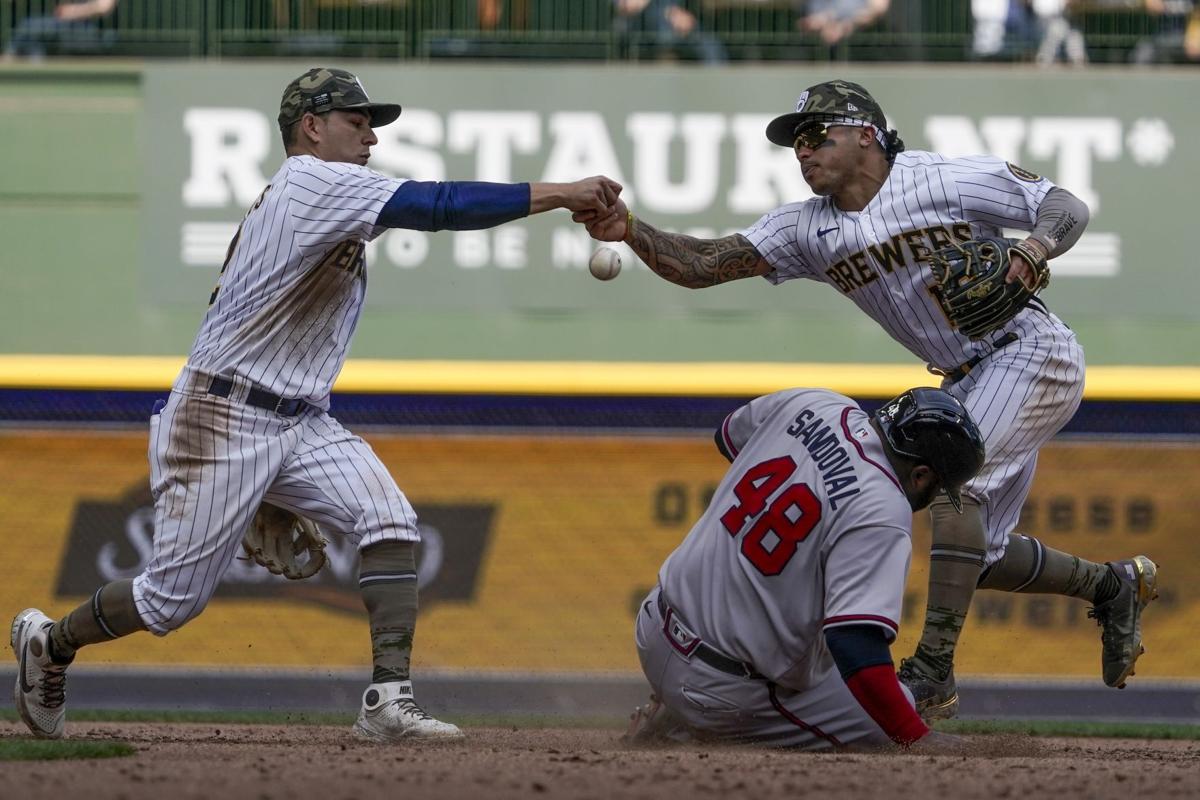 The Milwaukee Brewers' Kolten Wong and Luis Urias fumble the ball as the Atlanta Braves' Pablo Sandoval slides safely into second during the seventh inning Sunday in Milwaukee. 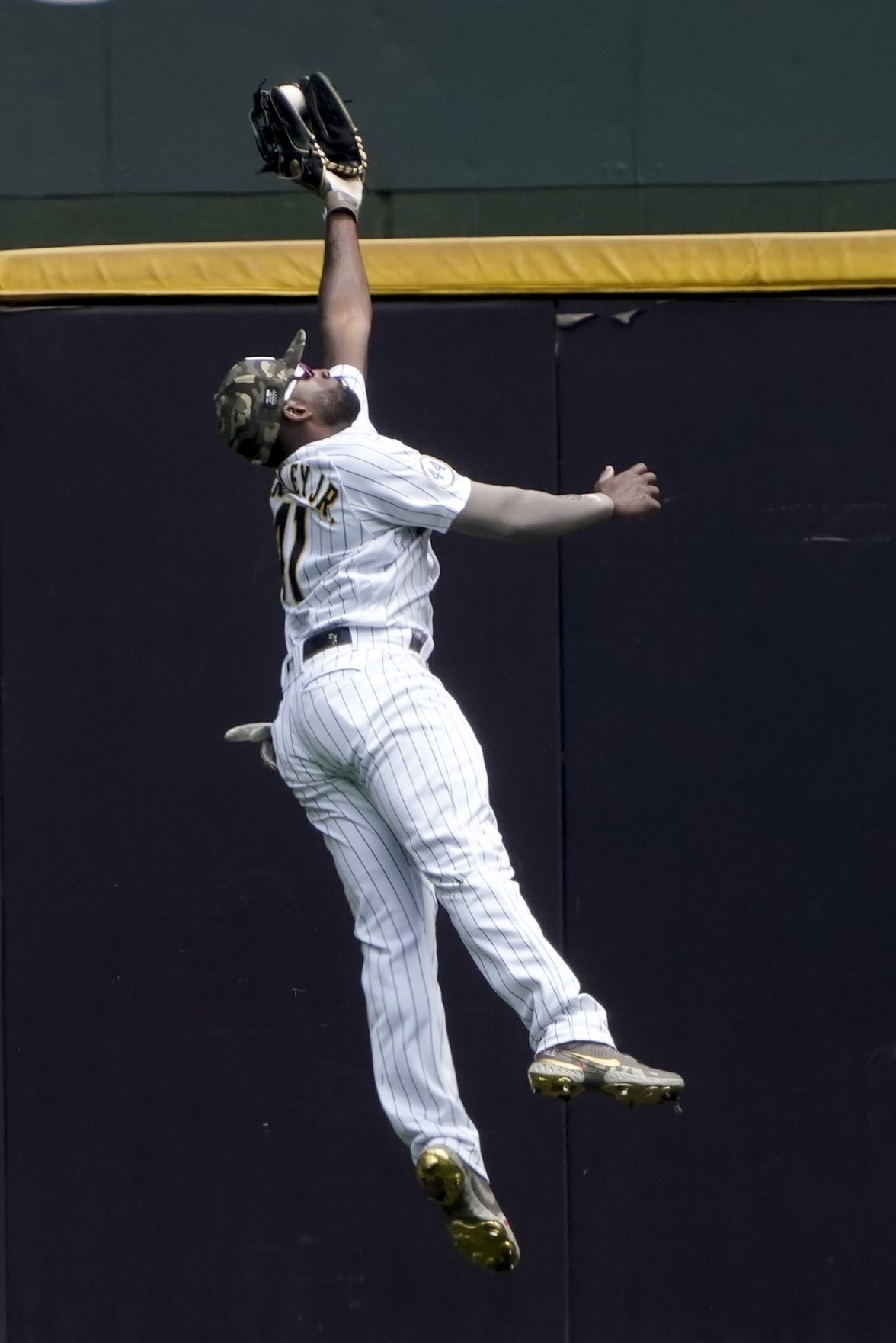 The Milwaukee Brewers' Jackie Bradley Jr. makes a leaping catch on a ball hit by Atlanta Braves' Ozzie Albies during the second inning Sunday in Milwaukee.

MILWAUKEE — Freddy Peralta struck out eight over six scoreless innings, Avisail Garcia homered and the Milwaukee Brewers blew most of an 8-0 lead before holding on to beat the Atlanta Braves 10-9 on Sunday.

It nearly fell apart for Milwaukee after J.P. Feyereisen relieved Peralta to start the seventh. He retired one batter before allowed two walks and two infield singles to make it 8-2. Brent Suter came in and, after two fielder's-choice grounders that resulted in zero outs, surrendered a grand slam to center by NL MVP Freddie Freeman that made it 8-7.

The Brewers shook off their highest-scoring inning by an opponent this season and got some insurance with Lorenzo Cain's two-run single in the seventh. The Braves added a run in the eighth against Devin Williams and another in the ninth against Josh Hader, who struck out William Contreras for his ninth save.

“It was a wild game, but we hung on for a win,” Brewers manager Craig Counsell said. “The offense kind of picked up our bullpen and our defense, and it’s been kind of the opposite this year. But the offense picked us up today.”

Peralta (4-1) held Atlanta to two hits and a walk while recording eight strikeouts for a third consecutive appearance. Since allowing a season-high five runs over four innings against the Phillies on May 5, the right-hander has thrown 13 scoreless innings, allowing three hits and a pair of walks during that stretch.

“Freddy was brilliant again,” Counsell said. “I thought this was just a real clinical performance. He was on target all day, everything he did was good. Right from the get-go he was really good.”

Huascar Ynoa (4-2) allowed a season-high five runs on nine hits and two walks while striking out six over 4 1/3 innings. He had surrendered just one earned run over his previous three outings.

“I felt like some pitches weren’t going my way or falling into the spots that I wanted but at the same time, you have to give credit to the hitters on the other team," Ynoa said. “You have your good days and you have your bad days. You have to learn from the bad days.”

Cain had three hits and scored twice, Kolten Wong went 3-for-5 and scored three times, and Omar Narvaez also had three hits for the Brewers, who had scored a total of four runs over the last three games while going 1-for-24 with runners in scoring position.

“It was good to see balls fall and get some runs on the board," first baseman Daniel Vogelbach said. “We’ve had some really good at-bats this homestand that just haven’t gone our way.”

Freeman's homer was his 11th of the season, trailing only teammate Ronald Acuña Jr. in the NL.

Braves: Acuña played for the first time since suffering an ankle injury in Thursday's loss to the Blue Jays. He was held out of the lineup for a third straight game but struck out as a pinch-hitter in the eighth.

Brewers: OF Christian Yelich (sore back) will be reassessed during the team’s day off Monday. Yelich started a third straight game for Triple-A Nashville on Sunday and went 0-for-2.

Brewers: Open a five-game trip Tuesday with the first of two games at Kansas City. Right-hander Brandon Woodruff (2-1, 1.64) gets the start.

One day after defeating the Menomonee Falls Lakers, the Racine Kiwanis closed out their weekend with a 3-2 Land O’ Lakes League loss to the Mo…

Avisail Garcia homered and singled home another run as Milwaukee beat Cincinnati 5-1 on Tuesday night for their 10th win in their last 11 games.

Tuesday's series opener at Cincinnati will mark the start of 33 games in 34 days leading up to the All-Star break.

Daniel Robertson and Tyrone Taylor homered as the Brewers beat Arizona 2-0 on Sunday to deal the Diamondbacks their team-record 17th straight road loss.

MLB's extra-inning rule is a hit with some, a whiff with others

May 1 was the 101st anniversary of a remarkable if obscure baseball game rediscovered every year.

Beginning Friday against the St. Louis Cardinals, the Cubs can start playing in front of packed Wrigley crowds again when the ballpark officially returns to 100% capacity.

The Milwaukee Brewers' Kolten Wong and Luis Urias fumble the ball as the Atlanta Braves' Pablo Sandoval slides safely into second during the seventh inning Sunday in Milwaukee.

The Milwaukee Brewers' Jackie Bradley Jr. makes a leaping catch on a ball hit by Atlanta Braves' Ozzie Albies during the second inning Sunday in Milwaukee.