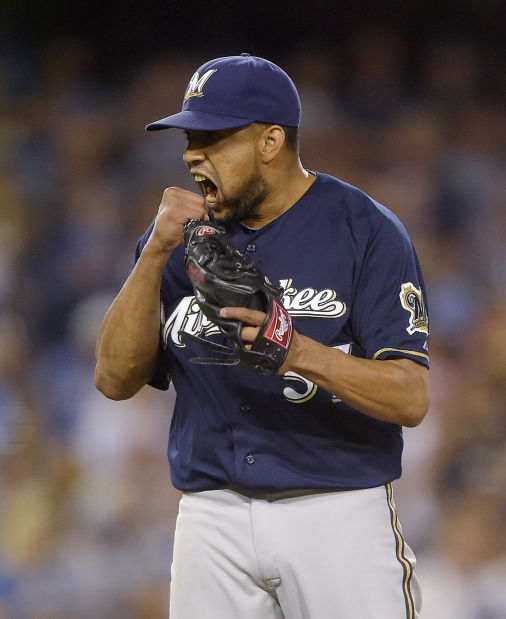 Milwaukee Brewers closer Francisco Rodriguez celebrates the last out of the Brewers' 3-2 win over the Los Angeles Dodgers Aug. 16 at Los Angeles. With 343 career saves, Rodriguez is 11th on the all-time list, four saves behind Randy Myers. 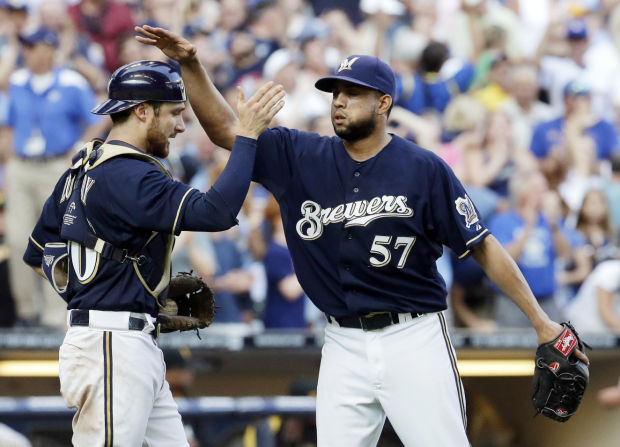 MILWAUKEE – As he continues his climb on baseball’s all-time saves list, Milwaukee Brewers closer Francisco Rodriguez has his sights locked on another set of numbers – wins and losses.

The 32-year-old right-hander earned his 39th save of the season Sunday in the Brewers’ 4-3 victory over the Pittsburgh Pirates at Miller Park to help the Brewers maintain their slim lead in the National League Central Division.

Rodriguez, known as K-Rod, made the ninth inning a little more exciting than the crowd of 42,761 may have preferred when he lost a 10-pitch battle with Pirates center fielder Andrew McCutchen for a one-out solo home run to cut the Brewers lead to 4-3. But, after issuing a two-out walk to Russell Martin, Rodriguez came back to strike out Pedro Alvarez to end the game.

With 343 career saves, Rodriguez is 11th on the all-time list, four saves behind Randy Myers.

But as far as Rodriguez is concerned, the more important number is the 72-58 record the Brewers took into their three-game series against the Padres in San Diego Monday night.

“That’s what we work for,” said Rodriguez, a 13-year veteran who has played for the Los Angeles Angels, New York Mets and Brewers. “Not every year you have the opportunity to be in the race and pitching in such pressure. But at the same time, it’s fun. I’m having a blast right now.”

As are the Brewers. While their NL Central lead has been whittled from a season-high 6 ½ games as late as July 1 to just 1½ games over the St. Louis Cardinals heading into the series against the Padres, the Brewers have been alone or at least tied for first place in the NL Central every day since April 5.

“I think every ballclub goes through adversity,” Rodriguez said. “The first month or two, we had a great run and everything was clicking. Then, we hit the wall a little bit and we struggled. Then we get back and it clicks and then again struggle. It’s been a little inconsistent, like a roller coaster, but one way or the other we managed to come back and stop the bleeding and get wins when we really needed to.”

Rodriguez’s season is the perfect example. He was a perfect 15 for 15 in save opportunities for a team that got off to an amazing 20-7 start. Rodriguez suffered his first blown save May 11 in a 6-5 loss to the New York Yankees and had another blown save May 26 in a 7-6, 10-inning loss to the Baltimore Orioles. But he then went a month before his next blown save (June 27 against Colorado) and almost another month before the next (July 25 against the New York Mets).

Since then, Rodriguez is 10 for 10 in save opportunities.

The Brewers, meanwhile, lost 11 of 13 games leading up to the All-Star break, but are 19-15 since the break, including a three-game sweep of the NL West-leading Dodgers in Los Angeles Aug. 15-17.

With just 32 games left in the season, Rodriguez knows it’s only going to get tougher for the Brewers. But he more than welcomes the challenge to play for the opportunity to be in postseason play for the seventh time overall and second with the Brewers.

“We just got to play more consistent because we got 2-3 pretty good ballclubs chasing us,” said Rodriguez, who was in postseason play with the Los Angeles Angels five times, including the 2002 World Series championship, and once with the Brewers (2011). “So, we have to be on top of our game. We still have a tough schedule coming up. We’re going to play teams that are right behind us (St. Louis and Pittsburgh) and teams that are right there in in the wild-card race also, so it’s going to be an interesting five weeks.”

• GAME IN PROGRESS: The Milwaukee Brewers-San Diego game Monday night in San Diego was in progress when The Journal Times went to press. For game details, go to www.racinesportszone.com

David Ortiz was elected to the Baseball Hall of Fame in his first turn on the ballot, while steroid-tainted stars Barry Bonds and Roger Clemens were denied entry to Cooperstown in their final year under consideration by the Baseball Writers’ Association of America.

Jim Souhan: How about a robot arbitrator to settle MLB’s dispute?

While the NFL dominated the sports landscape the past two weekends, Major League Baseball and the MLB Players Association continued to dawdle and damage their own popularity.

Locked out baseball players plan to make a counteroffer to management on Monday.

Milwaukee Brewers closer Francisco Rodriguez celebrates the last out of the Brewers' 3-2 win over the Los Angeles Dodgers Aug. 16 at Los Angeles. With 343 career saves, Rodriguez is 11th on the all-time list, four saves behind Randy Myers.