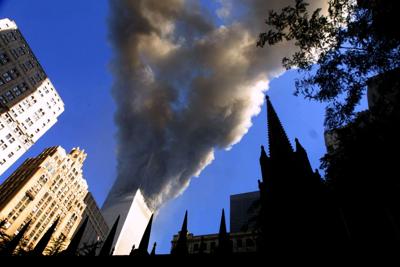 Where were you when you first heard about the terrorist attacks on 9/11?

Bart Van Roo of Waunakee was home with his wife the morning of Sept. 11, 2001. They turned on their TV and, like millions of Americans, watched in horror as a second plane crashed into the twin towers at the World Trade Center in New York City.

Van Roo knew his life would never be the same. Neither would Wisconsin’s and our nation’s sense of security. Not since Pearl Harbor in 1941 had the United States suffered such a devastating attack on its own soil.

Within hours, Van Roo was at Truax Field in Madison, waiting for the F-16 fighter jets he regularly flew on National Guard training missions to be equipped with missiles. The next day and for months after that, he was flying 20-mile loops above Chicago and sometimes New York, Washington and other big cities to protect against further attacks.

His new mission came with an unsettling possibility — that he might have to intercept or even shoot down a hijacked plane filled with passengers, if terrorists were steering it toward the Sears or Hancock towers in Chicago, or maybe the Wisconsin Capitol in Madison. All were considered potential targets.

"It's hard even for this generation in the military to understand how different the day before 9-11 was from the day after 9-11."

Thankfully, that never happened, though F-16s from Truax did have to confront a stolen plane from Canada, escorting it to a safe landing in Missouri. On another occasion, they responded to a jet with a passenger breaking into the cockpit, though authorities determined the intruder wasn’t a terrorist.

“I certainly felt proud that we were there just in case something happened, and as a deterrent,” Van Roo said last week. “It’s hard even for this generation in the military to understand how different the day before 9/11 was from the day after 9/11.”

The world changed in so many ways.

America lost its innocence 20 years ago on Sept. 11, realizing in the most dreadful of ways that we were vulnerable to fanatical enemies who could exact a terrible toll despite limited resources and crude means of violence. Nearly 3,000 people died in the 9/11 attacks at the World Trade Center, at the Pentagon in Washington when a third plane crashed there, and in Pennsylvania where a fourth jet plunged into a field (thanks to courageous passengers who fought the hijackers, preventing what might have been the destruction of the U.S. Capitol).

“Never forget” became America’s rallying cry. We’ll never forget the lives taken nor the heroes who saved lives. First-responders ran into burning towers. Many never made it out.

We’ll never forget how shaken yet resolved our nation was to prevent similar attacks. So far, on that goal, we have succeeded. America feels safer from such attacks today, though domestic gun violence and cyber threats have increased.

We should never forget that our nation’s initial attempt to protect our freedoms by limiting them with Patriot Act surveillance of citizens proved excessive, as then-U.S. Sen. Russ Feingold of Wisconsin had warned. Congress subsequently allowed much of the Patriot Act’s big-government intrusions to expire.

We’ll never forget how America unified to defend our democratic values and freedoms, with rousing international support. It was a special moment for America’s ideals. Our nation and its people rose above the dark forces that favored a barbaric past.

That’s something our children and future generations need to know, with all of the passion and complexity that factored into that tragic day 20 years ago, including America’s conflicted history in the Middle East before and after 9/11. Our children need to learn from the past to improve their and our nation’s future.

Esther J. Cepeda: ‘Spot the terrorist’ missed its target in the wake of 9/11

Too often today, our nation divides when we are challenged. Faced with a pandemic, we bicker over masks and vaccines. Shocked by the Jan. 6 insurrection at the U.S. Capitol — where ragtag protesters sought to overturn a legitimate election — far too many of our leaders in Congress chose politics over patriotism. Extreme voices on social media fan the flames of discord.

Our children need to hear a different story — the one from two decades ago when love for our country fostered enormous good will and cooperation to keep America’s beacon of hope shining around the world.

We were all Americans who shared a common experience and bond 20 years ago in the days that followed Sept. 11. We are still those Americans today in a growing melting pot of people who believe in freedom and liberty for all. Regardless of our political and cultural differences, we must strive to find the good in our fellow citizens, to respect their pursuits of happiness, and to try to come together around common goals.

Van Roo, now the commander of the 115th Fighter Wing at Truax, is one of two pilots still flying out of the military base in Madison who participated in the 24/7 air patrols following 9/11. He missed multiple Christmases and other holidays away from family, and deployed overseas to Qatar, Iraq, Japan, Korea, Afghanistan and Europe.

Tens of thousands of Americans similarly served at home and abroad to deter the sources of terrorism that could spawn another 9/11-sized attack. We need to honor their sacrifice today.

Van Roo never finished medical school to become a physician assistant, as he had planned. The trajectories of so many lives were altered by that fateful day when the towers fell.

“Flying at 1 o’clock in the morning over a big city, realizing you are there to protect it, you think, ‘How did I end up here?’” Van Roo said last week. “It’s not something I ever thought we would be having to do.”

But it’s something he and all of us should be proud of.

Not since the assassination of President John F. Kennedy in 1963 had so many Americans shared such a difficult moment as their nation and way of life were challenged. That’s why we remember where we were on 9/11 and what we were doing when those planes crashed in New York, at the Pentagon and in that rural field.

The world changed in profound ways. We all need to change the world for the better so that it never happens again.

Tell your children or grandchildren today about your own Sept. 11 experience — where you were, what you remember and how you felt.

They need to know that America, when it really needs to, can come together as one.

The views expressed in the editorials are shaped by the board, independent of news coverage decisions elsewhere in the newspaper.

Journal Times editorial: Shouldn't have taken a lawsuit to vaccinate at the border

On Wednesday, Sept. 15, the Biden administration announced that starting Oct. 1, immigrants are required to be fully vaccinated against the co…

Frankly, we expected better from institutions of higher learning such as the University of Wisconsin-Madison and UW-Oshkosh.

Journal Times editorial: These psychedelic experiments at UW are for therapy

They’re experimenting with psychedelic drugs again over at UW-Madison.

I personally wish to thank the 1,073 Racine County citizens who answered the call to participate in jury trials during the COVID pandemic.

It would be easy in this space to tell Burlington leaders to do whatever they can to save Echo Lake, the 70-acre body of water that provides an oasis of nature in the heart of the city.

We all hope that we never have to have 911 called for us or for any of our loved ones. We especially hope and pray that it’s not so serious th…

Tommy Thompson is not usually one to pick a fight. But he’s not one to back down, either, when one is dumped in his lap.