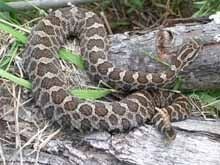 The state Department of Natural Resources is proposing to change how permits are issued for surveying and relocating endangered and threatened species, such as the eastern massasauga rattlesnake pictured here. 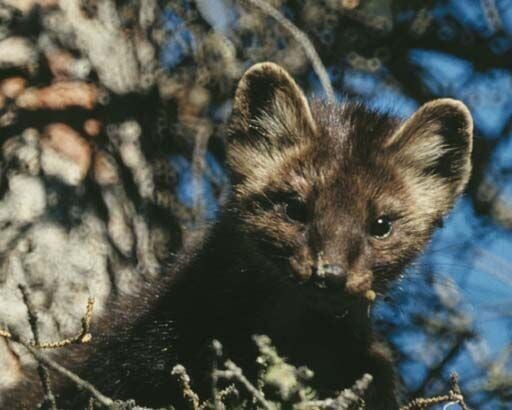 The American marten is the only mammal on Wisconsin's endangered species list.

The state Department of Natural Resources is proposing to issue a blanket permit for what’s known as “incidental taking” of endangered and threatened species as a result of surveys, removals and breeding required for “regulatory purposes.”

For example, when a development is planned for an area where a rare species of snake might live, an environmental consultant would go in to look for snakes and remove them.

Currently those consultants would need a permit for each project, which involves a public notice and comment period. Under the proposed change, projects that occur routinely with identical conservation measures would be covered under a blanket permit.

Paloski said permit recipients must still be authorized by species experts and submit annual reports to the agency.

“We want to make sure people have training and experience with the animals,” she said.

The DNR has determined that by adhering to conservation practices the change would minimize impacts to species and is not likely to jeopardize their existence or the survival of the state population.

While incidental take authorizations are often associated with the loss of individual creatures, the permit also covers handling.

“We’re not anticipating this activity will kill anything,” Paloski said.

More information, including the DNR’s impact assessment and background information on species, is available on the agency’s incidental take public notice website. The agency is accepting public comments on the proposal through Dec. 15.

The Wisconsin Department of Natural Resources is accepting public comments through Dec. 15 on proposed changes to permits for handling and relocating rare and endangered species. Comments can be submitted electronically to rori.paloski@wisconsin.gov or by mail to:

"I don’t know of anything else she brings to the table other than the Brooks trial,” fellow conservative candidate Dan Kelly said of Waukesha County Circuit Judge Jennifer Dorow.

The suspect is accused of stealing items from the store and returning later to return/exchange the items for their cash value, five items with a value of $1.25 per item.

The case is one of 350 eviction cases filed so far this year in Rock County Court as COVID-19 rent assistance and relief programs fade away.

A 10-year-old Milwaukee boy intentionally aimed a gun at his mother, then shot and killed her, because she would not buy him a virtual reality headset, prosecutors said.

The tree was estimated to be 248 years old, meaning it was just a sapling the day the American colonies sent a strongly worded letter to the king in 1776.

A pastor associate of Dane County sister parishes has been arrested on child sex charges, according to Dane County Jail records.

Christa Johnson, 57, of Cambria, pleaded guilty to one count of not paying employee withholding taxes for the third quarter of 2016.

In places like Hudson, Wisconsin, right-wing voters see an America under attack

They see a dark place, dangerous, where freedom is under attack by a tyrannical government and clans of neighbors might someday have to band together to protect one another.

SSM Health Dean was a planning an orthopedics ambulatory surgery center, which the new group says it will now build, along with an orthopedics hospital.

Survey: Most Americans have a connection with someone with substance abuse disorder

Survey: Most Americans have a connection with someone with substance abuse disorder

WisEye Morning Minute: The Need for Workforce Housing in Wisconsin

WisEye Morning Minute: The Need for Workforce Housing in Wisconsin

The state Department of Natural Resources is proposing to change how permits are issued for surveying and relocating endangered and threatened species, such as the eastern massasauga rattlesnake pictured here.

The American marten is the only mammal on Wisconsin's endangered species list.