Lee Enterprises will be carrying a live blog of events in the homicide trial of Kyle Rittenhouse, which began with jury selection Nov. 1 and opening statements the following day.

Rittenhouse, 18, shot two people and wounded a third during a night of unrest in Kenosha on Aug. 25, 2020. His attorneys contend he acted in self-defense, while prosecutors have portrayed him as an instigator.

Lee Enterprises/Kenosha News reporter Deneen Smith is reporting from inside the Kenosha County Courthouse, with reporting on this page augmented by remote staff.

After court today defense attorney Mark Richards said he believes they will finish with presentation of evidence this week. Asked if Rittenhouse would testify he said “Who’s Rittenhouse?” and laughed as he walked away.

3:35 p.m.: DeBruin is now testifying about what he saw after Rosenbaum shooting. "Now I can say (it was) Anthony Huber, it looked like he was trying to subdue Kyle, and that’s when everything happened in what seemed like a matter of a second."

Next, of Grosskreutz, DeBruin said "he had his firearm out, pointing it at Kyle, and Kyle shot Mr. Grosskreutz."

Bit of a crazy interchange in court as Richards asks DeBruin about a meeting DeBruin had with prosecution in which Binger asked him if he wanted to add anything to his statement. DeBruin took that as him wanting to rewrite his police statement. DeBruin said he hired his own lawyer and talked the next day to Richards. As cross examination got a little heated, judge sends the jury out of the room.

Back on the stand, ADA Kraus is pointing out differences between DeBruin's statement to police and what was said in court. "Like I said, I'm not a detective," DeBruin said.

3 p.m.: "You're the first witness who has ever done this, but you brought your own exhibits," lead defense attorney Mark Richards says to local resident Nathan DeBruin, who described himself as a freelance photojournalist. DeBruin brought in photographs he took the night of the shooting

The jury is looking a little exhausted as this witness goes through photos of Joseph Rosenbaum being involved in stuff like setting fire to a trailer and tipping over a port-a-potty.

1:55 p.m.: JoAnn Fiedler called to the stand. She said she went to protect businesses in Kenosha on Aug. 25 and met Rittenhouse that night. She affirmed that Rosenbaum yelled threats to the group she was with.

First witness up for the defense is Nicholas Smith, who worked for Car Source in the past and was with Rittenhouse and Dominick Black the night of the shootings.

Smith testifies that a family member of the family that owns Car Source asked for help defending the property, a direct contradiction of what the owner's sons testified to last week.

"That hand was over the barrel of Mr. Rittenhouse’s gun when his hand was shot?" Richards asks, trying to show how close Rosenbaum was to Rittenhouse's gun.

9:56 a.m.: Forensic pathologist Doug Kelley now on the stand. He did the autopsies for Anthony Huber and Joseph Rosenbaum.

Photos of Huber deceased are shown. Reporters in the room say Rittenhouse looking away from screens showing images.

Medical examiner moves on to Rosenbaum autopsy, with photo on the screen of headwound. The doctor says bullet travelled back to front and downward. Again Rittenhouse looks away.

Jurors appear to be paying close attention to medical examiner's testimony, taking notes, following his explanations — although one woman especially seems reluctant to look at the photos.

9:40 a.m.: The state received just on Friday high-resolution drone video that shows the shooting of Rosenbaum. With forensic imaging expert on the stand and video being shown. It shows Rittenhouse shooting Rosenbaum as Rosenbaum runs up to Rittenhouse, and it does not appear Rosenbaum ever made any contact.

Gun charge not dropped: In the opening discussions of the morning in the seventh day of the Kyle Rittenhouse trial — and before the jury is the room — Judge Bruce Schroeder denies defense motion to reconsider their request to dismiss Count 6, possession of a dangerous weapon by a minor.

The judge also informs the attorneys that a deputy observed someone taking video of the jury as they arrived. The deputy made the person delete the video. "I've been assured the officers had the video that was taken deleted. New measures are being taken to make sure that does not reoccur," judge tells jury when they arrive in the courtroom.

Before the jury was in the room, judge also said he would not address on the record the conversation he and attorneys had at the end of the day Monday in his chambers.

9 a.m. The prosecution is set to continue its case against Kyle Rittenhouse today in Kenosha.

On Monday, jurors heard from the protester and volunteer medic who survived after Kyle Rittenhouse shot him on the streets of Kenosha. Gaige Grosskreutz testified that he pointed his own gun at Rittenhouse but didn't mean to and had no intention of firing it.

Grosskreutz, the third and final man gunned down by Rittenhouse during a night of turbulent racial-justice protests in the summer of 2020, took the stand Monday at Rittenhouse's murder trial and recounted how he drew his own pistol after the bloodshed started.

“I thought the defendant was an active shooter,” said Grosskreutz, 27. Asked what was going through his mind as he got closer to the 17-year-old Rittenhouse, he said, “That I was going to die.”

Rittenhouse shot Grosskreutz in the arm, tearing away much of his bicep — or “vaporized” it, as the witness put it.

Rittenhouse, now 18, is on trial on charges of killing the two other men and wounding Grosskreutz. The one-time police youth cadet from Antioch, Illinois, had gone to Kenosha with an AR-style semi-automatic rifle and a medical kit in what he said was an effort to safeguard property from the violent demonstrations that broke out over the shooting of Jacob Blake, a Black man, by a white Kenosha police officer.

Testimony was expected to continue Tuesday with the state nearing the end of its case.

Prosecutors have portrayed Rittenhouse as the instigator of the bloodshed. His lawyers have argued that he acted in self-defense. He could get life in prison if convicted of the most serious charges against him.

Under questioning from the prosecution, Grosskreutz said he had his hands raised as he closed in on Rittenhouse and didn’t intend to shoot him. Prosecutor Thomas Binger asked Grosskreutz why he didn’t shoot first.

“That’s not the kind of person that I am. That’s not why I was out there,” he said. “It’s not who I am. And definitely not somebody I would want to become.”

But during cross-examination, Rittenhouse defense attorney Corey Chirafisi asked: “It wasn’t until you pointed your gun at him, advanced on him … that he fired, right?”

“Correct,” Grosskreutz replied. The defense also presented a photo showing Grosskreutz pointing the gun at Rittenhouse, who was on the ground with his rifle pointed up at Grosskreutz.

Grosskreutz, under follow-up questioning from the prosecutor, said he did not intend to point his weapon at Rittenhouse.

Wisconsin’s self-defense law allows someone to use deadly force only if “necessary to prevent imminent death or great bodily harm.” The jury must decide whether Rittenhouse believed he was in such peril and whether that belief was reasonable under the circumstances.

Grosskreutz said he had gone to the protest in Kenosha to serve as a medic, wearing a hat that said “paramedic” and carrying medical supplies, in addition to a loaded pistol. He said his permit to carry a concealed weapon had expired and he did not have a valid one that night.

“I believe in the Second Amendment. I’m for people’s right to carry and bear arms,” he said, explaining why he was armed. “And that night was no different than any other day. It’s keys, phone, wallet, gun.”

He said he went into action after seeing Rittenhouse kill a man just feet away — the second person Rittenhouse fatally shot that night.

While Grosskreutz said he never verbally threatened Rittenhouse, Chirafisi, the defense attorney, said that people don’t have to use words to threaten others. They can do so by their actions, “like running after them down the street with a loaded firearm,” Chirafisi said. Grosskreutz denied he was chasing Rittenhouse.

In addition, Chirafisi pointed to Grosskreutz’s lawsuit against the city of Kenosha, in which he alleges police enabled the violence by allowing an armed militia to have the run of the streets during the demonstration.

“If Mr. Rittenhouse is convicted, your chance of getting 10 million bucks is better, right?” Chirafisi said.

Chirafisi also asked Grosskreutz if he told his former roommate that his only regret was “not killing the kid and hesitating to pull the gun before emptying the entire mag into him.” Grosskreutz denied saying that.

Grosskreutz, who was trained as a paramedic, testified that he volunteered as a medic at protests in Milwaukee in the days after George Floyd died under the knee of a Minneapolis police officer in May 2020. Grosskreutz said he attended around 75 protests before the night he was shot, offering help to anyone needing medical attention.

While Rittenhouse is white, as were those he shot, the case has stirred racially fraught debate over vigilantism, the right to bear arms, and the unrest that erupted around the U.S. that summer over police violence against Black people.

Last week, witnesses at the trial testified that the first man shot and killed, Joseph Rosenbaum, 36, was “hyperaggressive” and “acting belligerently” that night and threatened to kill Rittenhouse at one point.

One witness said Rosenbaum was gunned down after he chased Rittenhouse and lunged for the young man's rifle.

Video and photos: Day 6 of the Kyle Rittenhouse Trial

Man shot by Kyle Rittenhouse: Thought 'I was going to die' 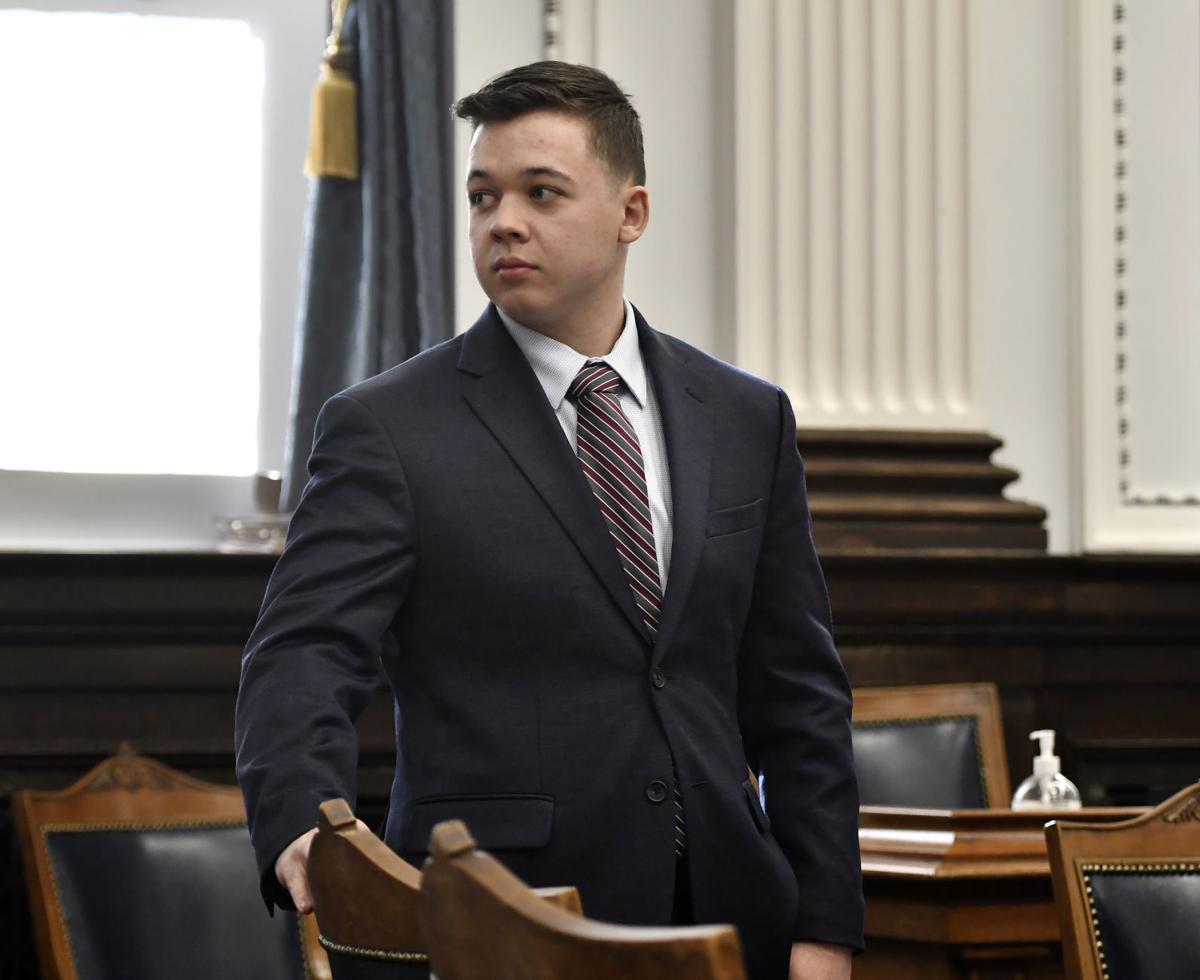 Kyle Rittenhouse looks back to the gallery during a break in testimony from Gaige Grosskreutz during his trial at the Kenosha County Courthouse in Kenosha, Wis., on Monday, Nov. 8, 2021. 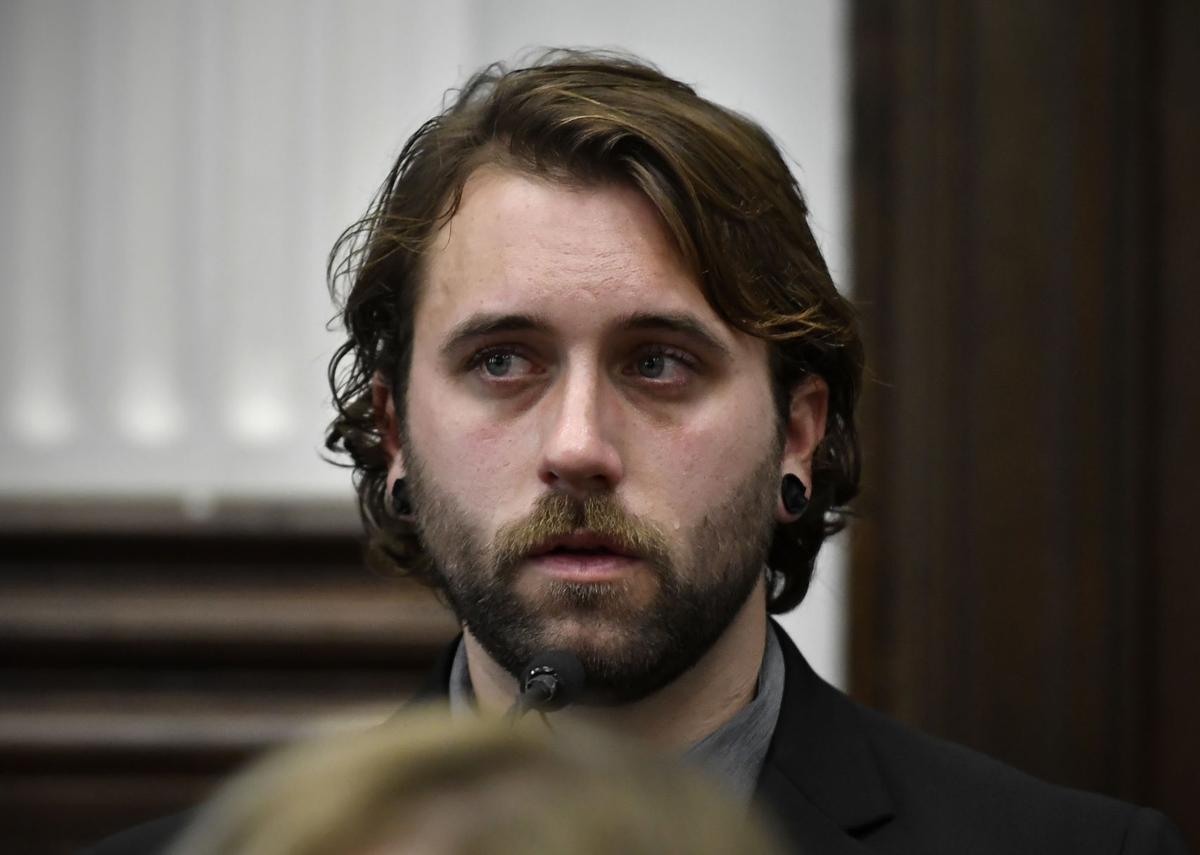 Gaige Grosskreutz describes the moments where he was shot by Kyle Rittenhouse during the trial at the Kenosha County Courthouse in Kenosha, Wis., on Monday, Nov. 8, 2021.