The University of Wisconsin Law School and several of its student groups are at odds over an upcoming recruiting event because the school is allowing an organization that rejects the existence of transgender identity to participate.

QLaw, a student group that advocates for the school’s LGBTQ student population, is spearheading the effort encouraging administrators to remove the Women’s Liberation Front from its lineup of public interest and government employers interviewing students for internships or post-graduation jobs.

Women’s Liberation Front describes itself as an organization dedicated to advancing and restoring the rights of women and girls.

But the group has a history of opposing gender identity legislation and worked with conservatives in fighting transgender rights, seeing trans activism as coming at the expense of women’s rights.

“Mainstream progressives have long shunned the organization, calling it a discriminatory, right-wing group disguised as feminist,” The Washington Post wrote last year in a story about the Women’s Liberation Front.

Law school Dean Daniel Tokaji said in a statement through a spokesperson that the school opposes discrimination in all forms and that, as far as he is aware, this is the first time Women’s Liberation Front has used the school’s Office of Career and Professional Development services. He cited First Amendment obligations in opening job fairs to employers with different viewpoints.

But to Ben Palmer, a second-year law student who is co-president of QLaw, allowing Women’s Liberation Front access to the school’s talent pipeline is “unacceptable” and directly conflicts with the school’s anti-discrimination policy. The group rejects that trans women are women, which QLaw said is discrimination on the basis of gender identity. Gender identity is protected under the school policy.

“We think there’s a strong distinction between a group that we find objectionable or disagree with and a group that enacts discrimination,” Palmer said. The school’s decision “signals to trans students that they won’t stand up for them.”

Even more concerning, QLaw academic chairperson Rainer Rosilez said, is the precedent it could set for other marginalized students. The first-year law student said the fact that it took students bringing the topic to administrators’ attention to elicit a response is “worrying” and “disturbing.”

Half a dozen other student groups representing Latinx, Asian, Middle Eastern, Black, Indigenous and female law students echoed QLaw in statements this week requesting the school remove the Women’s Liberation Front from the interview program and asking students not to apply for work at the organization.

The school, in a statement released over the weekend, acknowledged that it disagrees with positions Women’s Liberation Front embraces, but argues that their differences don’t justify excluding the group from recruitment programs.

All employers who use campus facilities, post jobs in the school’s job bank or participate in interviews must confirm they do not discriminate in their hiring practices. Women’s Liberation Front confirmed it does not, the school said, and “we have no information to the contrary.”

“That is key to this debate,” said Alex Knorr, QLaw’s other co-president. “To them, (Women’s Liberation Front’s history) does not indicate they would discriminate in their hiring practices. It’s just their belief.”

Members of QLaw wondered what follow-up, if any, the school does to confirm employers do not discriminate in their hiring practices. They met last week with Tokaji and Megan Heneke, assistant dean of the school’s Office of Career and Professional Development, where they said administrators suggested both trans students and those whose gender identity matches their sex assigned at birth apply for positions at Women’s Liberation Front to see if there was a difference in who received offers.

The idea, Palmer said, would put the burden of enforcing the school’s policy on students and also place trans students into a hostile environment.

Tokaji said the school discussed ways in which one tries to determine if an employer is discriminating. One common strategy is to have “testers” apply for a job to see if there are any disparities in who receives interview offers.

“We did not say that the enforcement burden should lie with students; rather, we asked them to provide us with any information they have regarding discriminatory conduct,” Tokaji said. “We have also conducted our own inquiry, which has revealed no information that (Women’s Liberation Front) is violating our equal opportunity policy.”

Women’s Liberation Front executive director Natasha Chart declined an interview request but provided a statement applauding UW Law School for “demonstrat(ing) courage in the face of a toxic intolerance pervasive within university and college campuses” and saying that the school’s decision reaffirms why the group wanted to participate in the first place.

Chart said the organization does not discriminate based on sex in employment matters.

Tokaji encouraged anyone with information on Women’s Liberation Front or any other employer discriminating in its hiring practices to come forward so the school can take action. 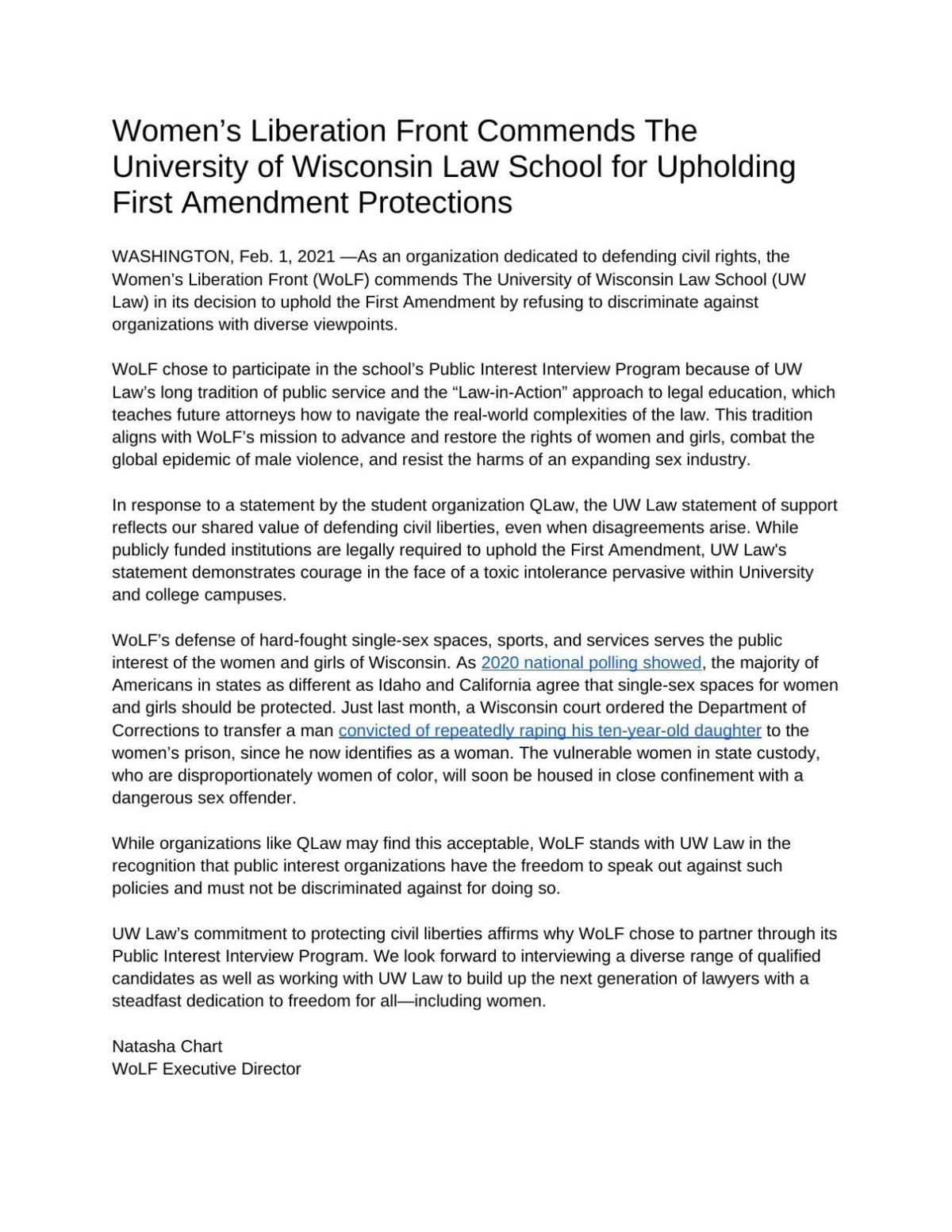 Police were searching Thursday for a Northwest Indiana traveling nurse wanted on charges alleging he forced a car-crash victim to have sex with him in exchange for pain medication that the victim had been begging for.

Evers has now issued a total of 157 pardons during his term in office.

Teachers belong to a group of 700,000 people who will be eligible for the vaccine starting Monday, joining those over 65. About half of those people have been vaccinated, allowing the move to the next priority group.

Ballot drop boxes would not be allowed anywhere other than election clerk offices in Wisconsin, and only voters — not elections officials — co…

Wisconsin witnessed a surge in absentee voting in 2020.

A Madison woman was sentenced Friday to a year and a day in federal prison for evading paying more than $3 million in taxes by skimming funds earned by video gambling machines in bars, authorities reported.

Under the "Final Five" electoral system, all candidates run on a single ballot in the primary, with voters selecting their favorite candidate. When votes are tallied, the top five candidates advance to the general election.

The national anthem would have to be played before all sporting events held at Wisconsin venues that received any public funding, from Green B…