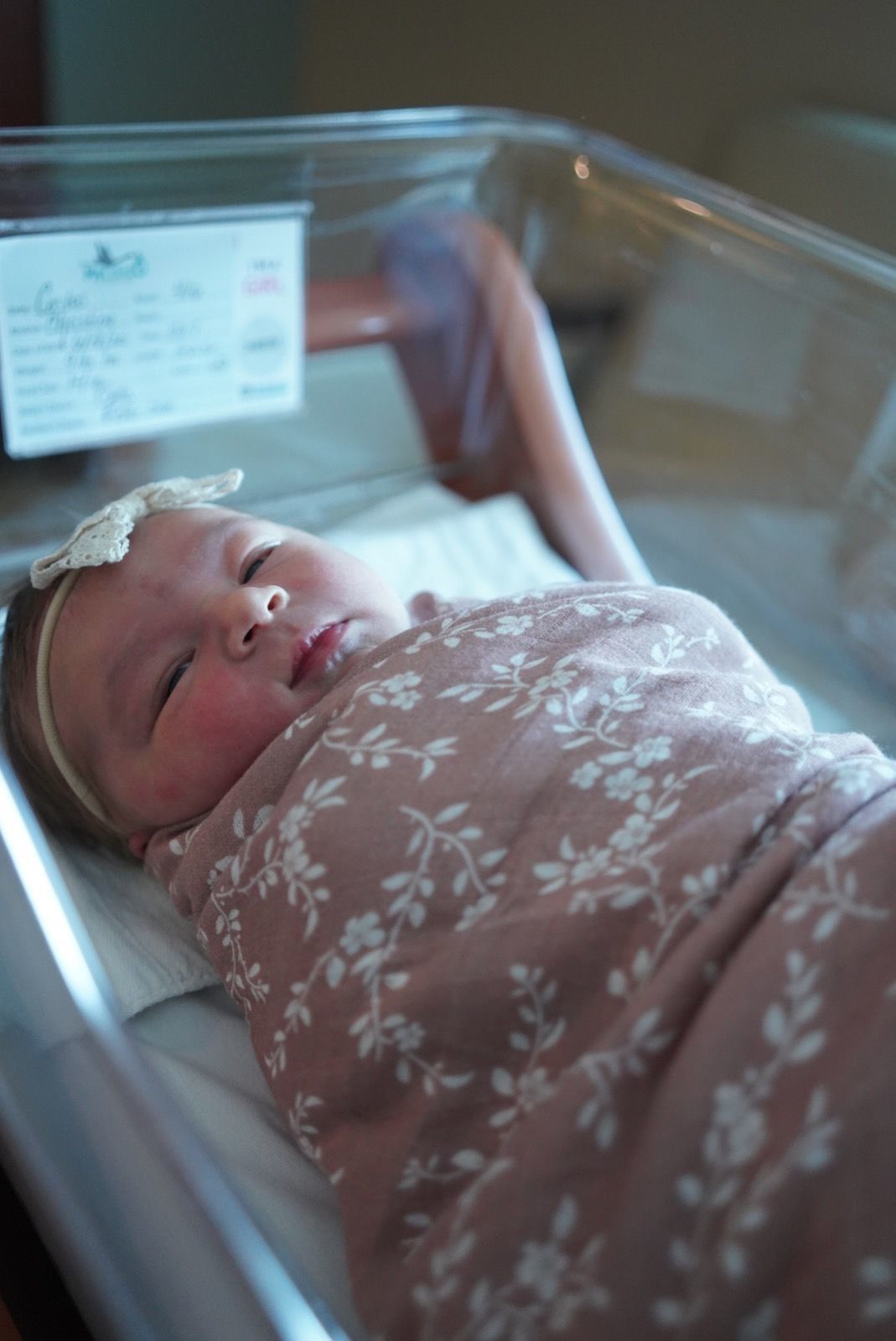 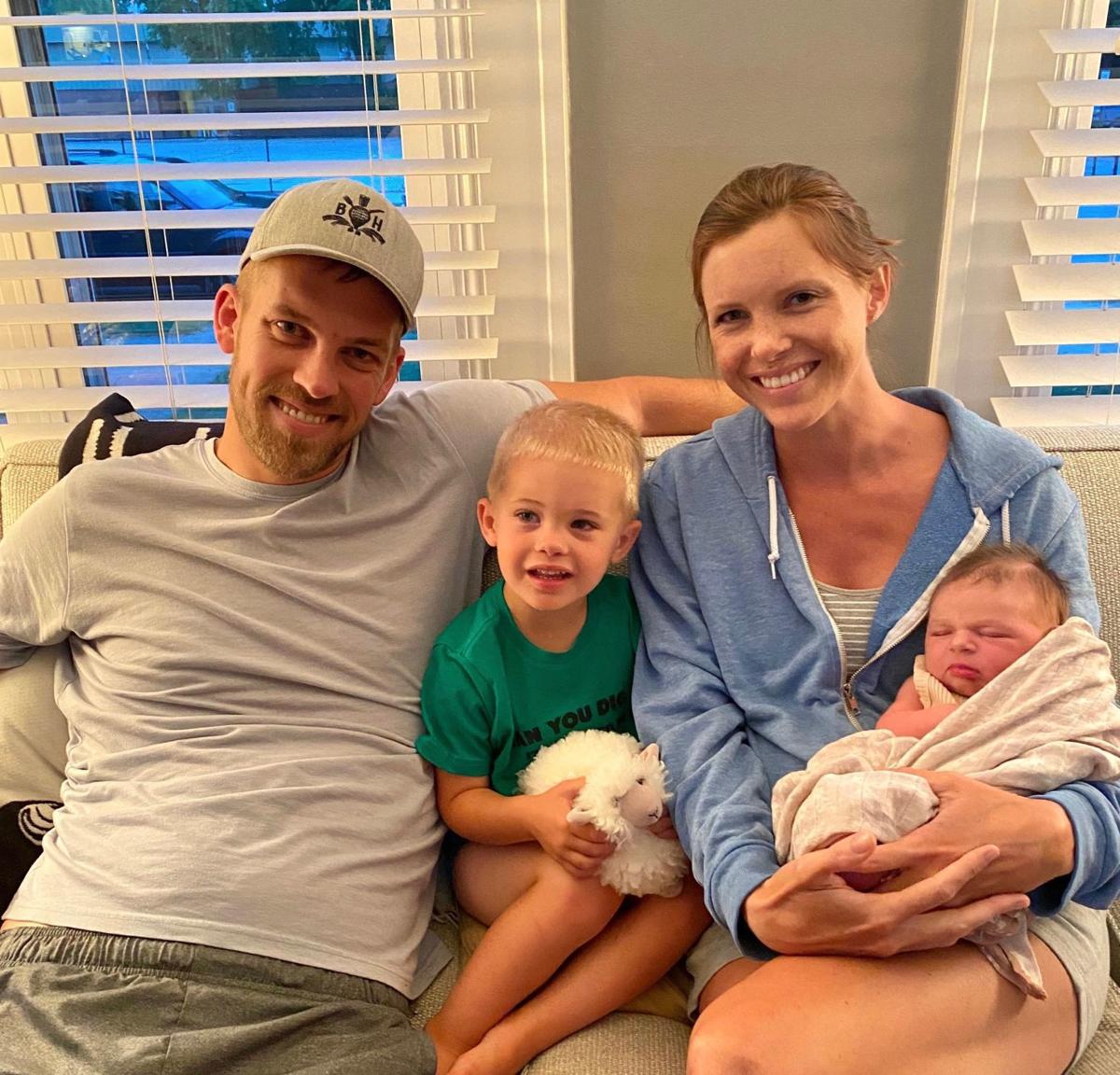 Evan and Christina Costas, with children Bill and Ellen.

VALPARAISO — Valparaiso City Councilman Evan Costas said when it became clear to he and his wife, Christina, late Tuesday night that their second child was preparing to enter the world, the couple did not immediately rush off to the hospital.

When their older son, Bill, was born two and a half years ago, it was a long and uncomfortable labor at the hospital and the couple wanted to hold off leaving home this time as long as possible.

"It's just more comfortable at home," Evan said Friday morning. "That was the plan."

What they did not expect is that their daughter, Ellen, was going to be in a much bigger rush to be born and that the couple would wind up delivering the baby themselves just outside the emergency room doors at the nearby Porter Regional Hospital.

"It happened so fast, it was wild," he said. "It was quite an experience."

Christina, who had worked as a postpartum nurse, knew how to keep herself comfortable at the family's home in downtown Valparaiso when it became clear that her delivery was nearing, Evan said. All was going well — until it wasn't.

"All of a sudden things just started moving very quickly," he said.

Evan, son of former Valparaiso Mayor Jon Costas, said he notified his mother it was time to get to their house to watch their son as he helped Christina, or Stina as she is known by, get up into the passenger seat of his Ford F-150 pickup truck. The mother-to-be yelled for Evan to notify the hospital they were on their way as he drove to the facility just north of Valparaiso.

When he pulled up outside the emergency room doors, Evan said he ran inside to notify staff and was instructed to bring his wife in on a wheelchair. After seeing how close his wife was to giving birth, he returned to the hospital seeking help before rushing back outside just in time to help his daughter be born.

"She was trying to stand up a little bit on the seat," he said of Christina.

It was at that point, around 1 a.m. Wednesday, that he saw the top of his daughter's head appear.

"Literally five seconds later the baby popped out," Evan said. "All I did was stick my hands out and catch her."

"You don't plan on this," Evan said. "Babies come out when they're ready."

Evan downplayed his role in the delivery, giving credit to his wife.

"I also wanted to add that we are grateful to God for protecting my wife and baby through all of that chaos," he said.

'They targeted her for the color of her skin': Madison woman suffers burns in attack

“She was minding her own business and sitting in a car and someone decided to pour fluid on her face and light her on fire,” Michael Johnson told the Cap Times Thursday. “That’s a hate crime. They targeted her for the color of her skin.”

The state Democratic Party this year has circled the wagons with a Save the Veto campaign aimed at holding all their seats.

The three-judge panel — all Republican appointees — found that the state can restrict early voting hours and restored a requirement that people must live in a district for 28 days, not 10, before they can vote. The panel also said emailing and faxing absentee ballots is unconstitutional.

Wisconsin Republicans who oppose making it easier for people to vote absentee have taken advantage of the opportunity to vote by mail in recent elections, with more than 80% of GOP members of the state Legislature doing it in April.

Big housing project proposed for farmland on Madison's North Side

The Annex Group is proposing 315 lower-cost housing units in multiple buildings at the corner of Packers Avenue and Wheeler Road on Madison's North Side.

“It’s clear that alcohol and coronavirus do not mix," said Madison Mayor Satya Rhodes-Conway, who added that the average age for coronavirus cases in Dane County is now 23.

Mayor Satya Rhodes-Conway said the city will be hiring one deputy mayor, and the position should be publicly posted Tuesday.

The state's teacher workforce has remained overwhelmingly white, according to the study.

There have been no documented cases of COVID-19 infection within Wisconsin’s $223 million mink industry, though producers say they are taking precautions to protect their herds and animal rights activists have renewed calls to ban the fur trade.

Evan and Christina Costas, with children Bill and Ellen.