This content is being provided for free as a public service to our readers during the coronavirus outbreak. Please support local journalism by subscribing.

Dane County’s public health department isn’t saying how much progress must be made against the COVID-19 coronavirus before limits on public gatherings and businesses are eliminated, leaving open the possibility that the restrictions could extend through the rest of the year or longer.

Meanwhile, UW-Madison on Wednesday issued an order that will limit access to a number of popular gathering spots on campus just as the warmer weather starts to draw people outside after two months of safer-at-home restrictions.

Public Health Madison and Dane County’s reopening plan, released Monday and known as Forward Dane, mandates a phased-in approach to the size of public gatherings and the number of people allowed at one time into stores, restaurants and other venues — all based on the county’s ability to meet a range of criteria on testing, new cases and other health metrics.

The county is currently in the “prepare for safe reopen” phase and could move into the first phase of the four-phase plan as early as Tuesday. For that to happen, the county must be meeting specific benchmarks for nine criteria, including contacting 70% to 85% of all new cases within 48 hours of test collection and conducting 400 to 800 tests per day. As of Monday, the county was meeting that threshold, but new ratings are due Monday.

More progress on the metrics is necessary to move into phases two and three, with each phase lasting at least 14 days, the same as the incubation period for the virus. But under the plan, the county would remain in phase three — which limits large gatherings to 100 people indoors and 250 outdoors and most businesses’ capacity to 75% — “until widespread protections are available.”

What constitutes “widespread protections” being “available,” however, is not defined in the plan, and on Wednesday, the department wasn’t saying whether it means universal access to an as-yet undeveloped vaccine against the virus, or something short of that.

“Right now we are focusing on providing clear guidance and expectations for the next three phases,” the public health department said in an unsigned email.

Public health experts don’t expect a vaccine to fight the coronavirus will be available before the end of the year, at the earliest.

“Our reading of it is you remain in phase three until a vaccine is widely available,” Manley, Wisconsin Manufacturers and Commerce executive vice president of government relations, said in an interview Wednesday.

He contended in his tweet that with the plan’s limits on large gatherings, “they’ve effectively killed Badger football, hockey and basketball for 2020.”

Correct. Underreported story of the new Dane County lockdown policy is that they’ve effectively killed Badger football, hockey, and basketball for 2020. No sporting events with more than 250 people until there is a vaccine (if there ever is one). Ridiculous overreach. https://t.co/nNWs4Yxe1G

In a statement, UW-Madison spokesman John Lucas said the county’s order “does not apply directly to units of a state agency.”

He said that once the university gets a plan from the Big Ten Conference on resuming competition, it will rely on that and on consultations with local officials in making decisions about how to move ahead with Badger sports.

While the university develops a broader, phased reopening plan, its Wednesday order requires people on campus to stay at least 6 feet away from others who are not part of their household, follow limits on the total number of people allowed in an area and remain outside areas that are closed with fences, gates or other barriers.

In a statement, the university said the rules “apply to all campus lands including but not limited to Memorial Union Terrace, Alumni Park, the Arboretum, the Lakeshore Nature Preserve, Bascom Hill, Gordon Commons lawn and recreation fields.” Temporary fencing will also be installed along the lake shore near the Memorial Union Terrace, Alumni Park and the Goodspeed Family Pier, which will be closed to boaters.

The university said it will “promote voluntary compliance with the order through education and communication,” but violators could be “subject to citation and fine.”

State law gives local public health departments the power to implement regulations “that it considers necessary to protect and improve public health” but says those regulations “may be no less stringent than, and may not conflict with, state statutes and rules of the department.”

The health department’s March order closing schools and limiting the size of public gatherings was done under the authority of a different chapter of state law that allows the local health officer to take “all measures necessary to prevent, suppress and control communicable disease,” and provides for a fine of not more than $500, a jail term of no more than 30 days or both for violating orders under made under law.

The health department did not respond to a request for comment Wednesday on Forward Dane’s legal basis.

Joe Biden also attended an online discussion with U.S. Rep. Ron Kind, where he criticized Trump's handling of the pandemic and called for the need for more testing and contact tracing.

In response to restrictions caused by the COVID-19 pandemic, about 80,000 people have received extensions until July 25 to renew their expired licenses.

Farmers have to deal with rural library closures and sharing internet with family members, as more of life is now internet-based.

Madison and Dane County announced Friday that restaurants and other establishments are allowed to open for limited in-person dining beginning next week. But some owners say they're waiting to do so.

With no "safer at home" order in place, local officials can choose to implement a county-specific template order, developed by the state, that models the Evers administration's extended stay-at-home language and reopening framework.

The lawsuit comes after Public Health Madison and Dane County announced the county's reopening plan, which replaces the statewide plan struck down by the Wisconsin Supreme Court.

Despite a projected $30 million budget shortfall for 2020 due to the COVID-19 pandemic, Mayor Satya Rhodes-Conway on Friday said the city will not furlough employees until at least July. 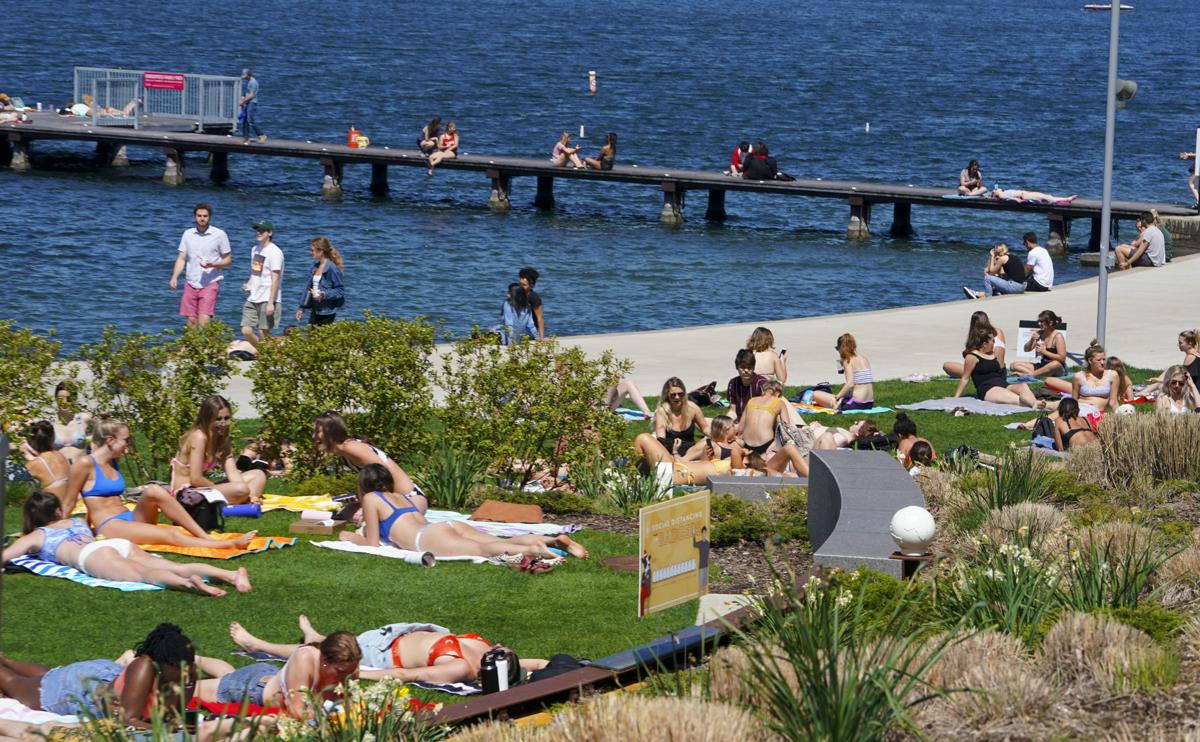 With clear skies and a high of 70 degrees there was little social distancing on display at UW-Madison's Alumni Park on Wednesday. Hours later, the university announced an order limiting gatherings on campus and said it would install temporary fencing along the lake shore and other popular spots to limit access. While nicer weather is on the way Thursday and Friday, public health officials are urging people to stay safe by enjoying the outdoors at a distance from others to help contain COVID-19. 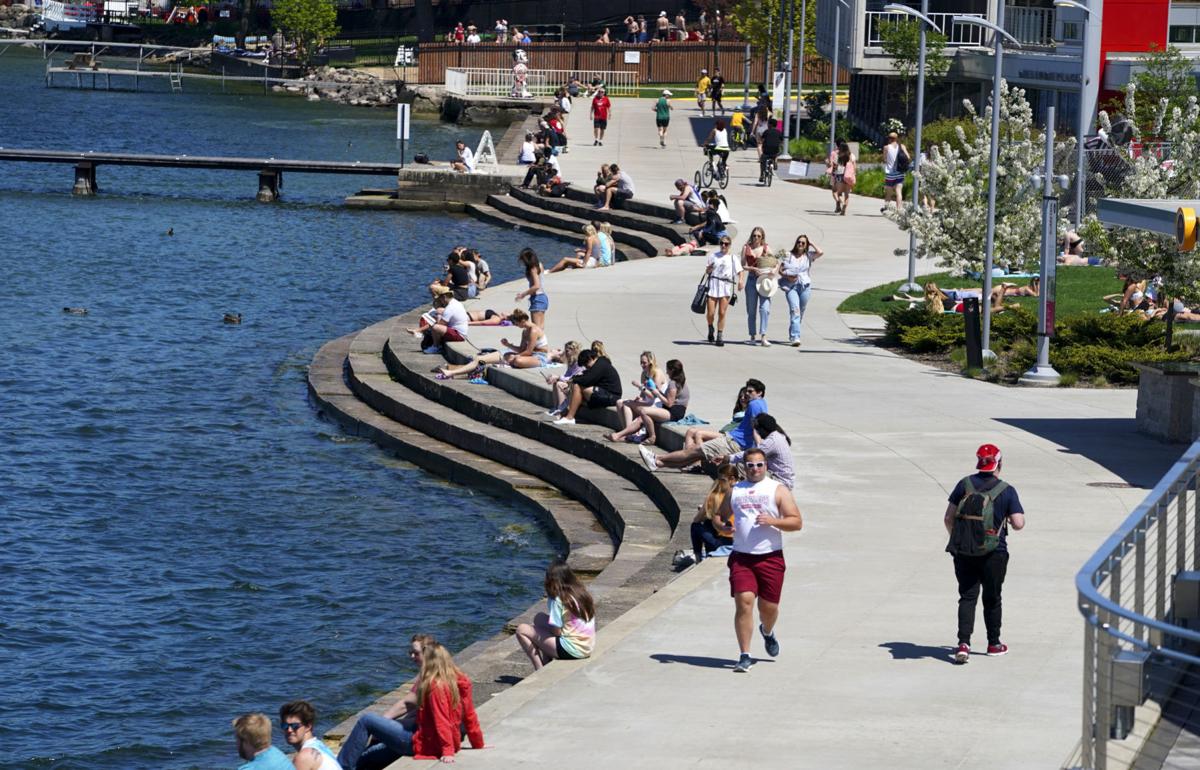 In an order announced late Wednesday, UW-Madison will fence off Union Terrace, above, and other high-traffic areas to try to limit large public gatherings.