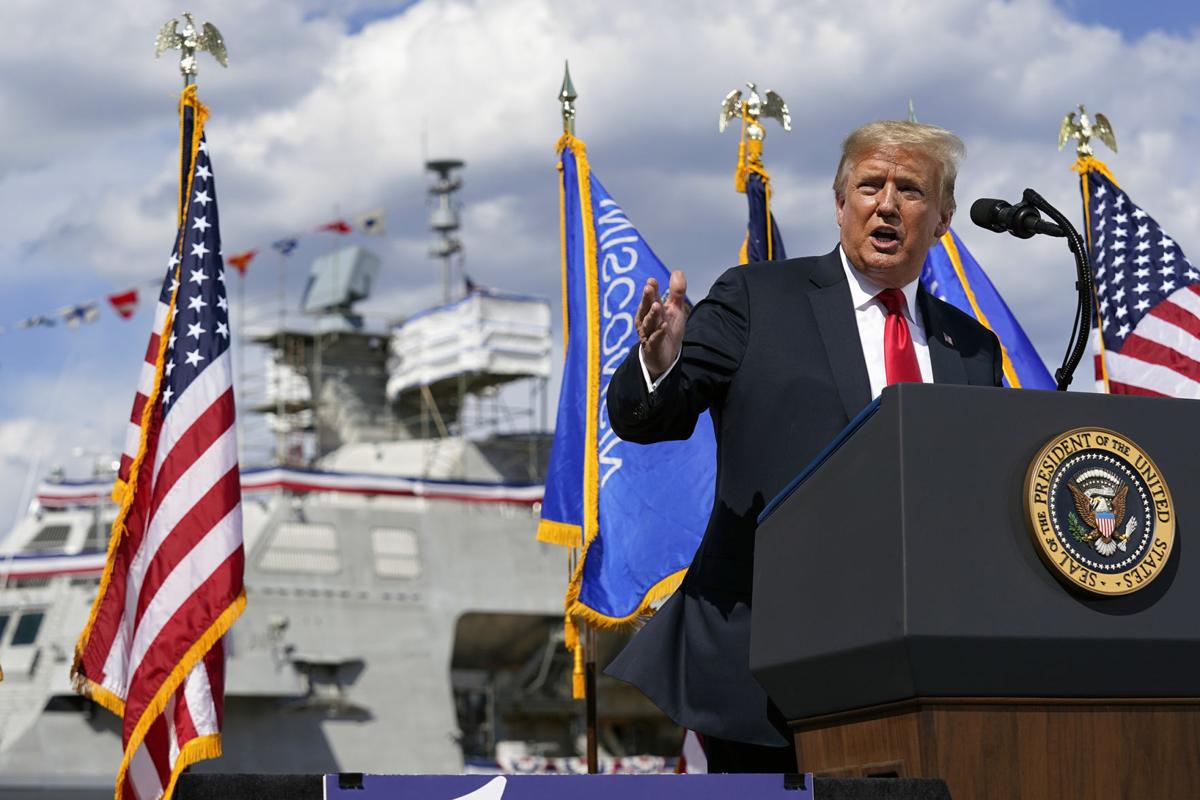 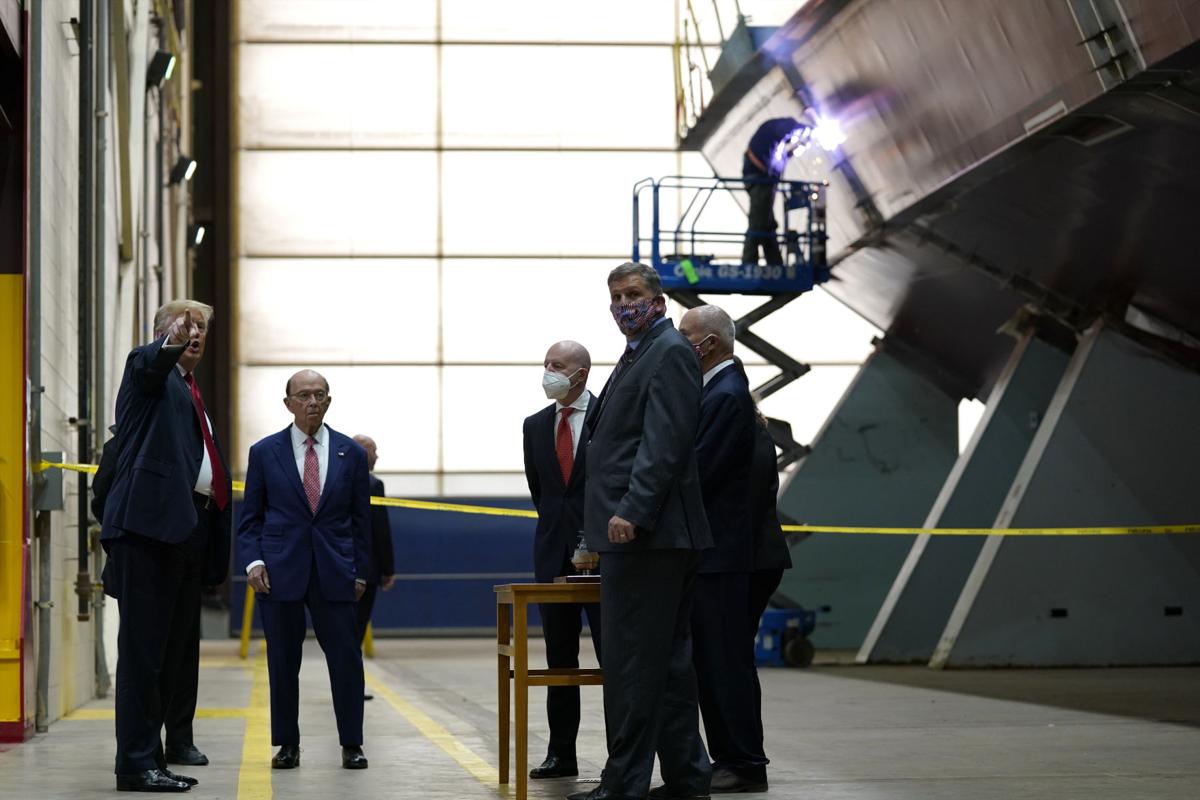 President Donald Trump tours Fincantieri Marinette Marine, where he spoke Thursday. Trump, who generally refuses to cover his face, did not wear a mask for his speech, though many of the employees who gathered for the address did.

MARINETTE — Despite enormous economic headwinds and sky-high unemployment numbers, President Donald Trump sought to showcase his record as a job creator on Thursday during a visit to a shipyard in the battleground state of Wisconsin.

Trump boasted of his “aptitude for manufacturing” and again offered a rosy prediction that the coronavirus-battered economy is set to turn a corner even as the U.S. marked its 14th straight week with more than a million workers making unemployment claims.

The president made the comments during a tour of the Fincantieri Marinette Marine shipyard, the recent winner of a $5 billion federal contract to building up to 10 new guided missile frigates. The Marine shipyard is a U.S. subsidiary of Italian enterprise Fincantieri, one of the world’s largest shipbuilders.

Trump’s visit to Marinette is believed to be the first time a sitting president has come to the city. As a candidate, John F. Kennedy campaigned in Marinette in 1960, when he gave a speech on the importance of loans for farmers. Pence was at the same Marinette shipyard in November to promote Trump’s trade deal with Mexico and Canada.

Wisconsin, a state that Trump narrowly won in 2016, is expected to be one of the most hotly contested battlegrounds as he looks toward his re-election effort.

“I understand manufacturing,” Trump said during an address to the shipyard employees. “Remember, manufacturing was never going to come back. Well, it did come back. It came back big.”

But times have changed in Wisconsin and throughout the country.

Unemployment has surged to 12% in Wisconsin, a rise on par with job losses nationwide because of the pandemic. When Trump last campaigned in the state in January, the unemployment rate was 3.5%.

Trump’s standing in Wisconsin appears to be suffering from the extraordinary period of turmoil, and his visit was part of a concerted effort to shore up support in friendlier areas that can make or break his re-election chances.

Before his visit to Marinette, Trump participated in a town hall, to be broadcast in prime time by Fox News Channel, from an airport in Green Bay. The trip came two days after he dispatched Vice President Mike Pence to the conservative Milwaukee suburbs.

The two parts of Wisconsin that Trump targeted this week — suburban Milwaukee and the Green Bay media market in northeast Wisconsin — are areas where he needs to run up a big vote advantage in November.

Trump noted that he has pushed for a 355-ship Navy fleet by the end of his first term, though left unsaid is that the Navy is on track to have have just over 300 ships by 2025. Still, Trump knocked Democrats as doing too little for the military.

“I will tell you that Democrats don’t like approving money for the military for whatever reason,” Trump said.

Some polls have suggested Trump has ground to make up in Wisconsin. A Marquette Law School Poll released Wednesday showed presumptive Democratic nominee Joe Biden with an 8 percentage point lead over Trump. Trump trailed Democrat Hillary Clinton in nearly every poll conducted in Wisconsin in 2016 — often by similar margins — before he won the state by fewer than 23,000 votes.

Marinette County helped deliver that win. Trump carried the county, about 170 miles north of Milwaukee along the shores of Lake Michigan’s Green Bay, with 65% of the vote.

Unlike Trump’s rally in Oklahoma last weekend and his visit to a Phoenix megachurch Tuesday, his tour of the Fincantieri Marinette Marine shipyard was not open to the public.

Trump, who generally refuses to cover his face, did not wear a mask for his speech at the shipyard, though many of the employees who gathered for the address did.

Marinette has not been a hotbed for the virus, with just a few dozen cases and three deaths. Thirteen employees at the shipbuilder have tested positive for COVID-19, but they have all recovered and returned to work, the shipbuilder’s spokesperson Eric Dent said. Everyone who enters the facility is now screened, he said.

Trump’s appearance gave him a chance to score points with blue-collar workers who know the importance of the shipbuilder to the region’s economy, said Rep. John Nygren, R-Marinette.

“Granted, Trump is not traditional in a lot of ways, but it’s a great opportunity from a working-class standpoint to show Republicans can stand up for them,” Nygren said.

Trump promoted a contract won in April by Fincantieri Marinette Marine to build as many as 10 Navy frigates. The shipbuilder plans to invest $200 million to expand the Marinette facility because of the contract. The company employs about 2,500 people now, and the deal could add 1,000 jobs and be worth $5.6 billion if all the ships are built. It’s the first new major shipbuilding program for the Navy in more than a decade.

Biden said in a statement Thursday that Trump was coming to Marinette “to take credit for Obama-Biden administration-fueled successes in an attempt to paper over the fact that Wisconsin has been bleeding blue-collar manufacturing jobs over the past few weeks. Instead of offering real relief to working families, he’s trying to claim credit for progress in Marinette he did not build.”

“I understand manufacturing. Remember, manufacturing was never going to come back. Well, it did come back. It came back big.” President Donald Trump, visiting Marinette shipyard

A conservative legal group asked a court on Monday to immediately stop the enforcement of Gov. Tony Evers’ statewide mask mandate even as Wisconsin now ranks among the top states for new coronavirus cases per capita.

Demonstrators in support of Black lives set up an impromptu block party in the Downtown intersection of West Washington Avenue and Henry Street, where they set up tables and grills to prepare food, played music and painted the street with washable paint.

Democracy in the Park, a now embattled ballot collection effort, is being challenged by state Republican leaders who call into question the legality and security of the event.

In first visit to Madison, Jill Biden pushes voters to 'do more' in the Democratic stronghold

State elections officials anticipate as many as 2 million people will cast absentee ballots in the Nov. 3 election, due in large part to the ongoing COVID-19 pandemic.

With most of Wisconsin’s $2 billion in discretionary federal aid for COVID-19 allocated, but some still not earmarked and much of it unspent, groups such as hospitals and EMS providers are jockeying for what’s left.

Portions of East Washington Avenue in Madison will have reduced speed limits due to recent drag racing, speeding and other dangerous driving, city officials said.

The court's decision in one of the cases could mean the deactivation of around 130,000 registered voters.

Madison poll workers were dispatched to more than 200 parks across the city Saturday in a non-partisan ballot collection effort launched by the City Clerk’s Office, despite an attempt to end the event by Wisconsin Republicans.

With an abundance of polls favoring Joe Biden, is Wisconsin still up for grabs?

Polling in Wisconsin was notoriously off in 2016, but there were only 70 polls here that year, and nearly 200 so far this year.

President Donald Trump tours Fincantieri Marinette Marine, where he spoke Thursday. Trump, who generally refuses to cover his face, did not wear a mask for his speech, though many of the employees who gathered for the address did.