Drones may soon have the capability to save thousands of lives each year by detecting terrorists’ improvised explosive devices and active land mines from long-ago wars thanks to innovative technology developed at UW-Madison.

The proven detection technology that also can detect chemical and nuclear weapons and drugs was successfully miniaturized and designed to fly on small unmanned aircraft by Fusion Technology Lab graduate students about five months ago, according to Jerry Kulcinski, an emeritus professor of nuclear engineering and the lab’s director.

“They did something that has never been done before,” Kulcinski said.

The centerpiece of the system is a fusion device that paints a target area with neutrons. Then sensors look for gamma rays or other particles with the signatures of specific materials such as explosives or a nuclear device. It’s the same technology used at security checkpoints to scan luggage and shipping containers in airports, but the breakthrough for the UW-Madison scientists was making the radiation source small enough to mount on a drone.

That added mobility makes the technology a potential game-changer: Military convoys could be alerted to roadside bombs. Rescuers could dig directly toward people buried by earthquake rubble. Valuable mineral deposits could be mapped.

Kulcinski, an internationally renowned scientist and longtime adviser for NASA, believes it’ll take about a year to get the system into the field — if they can find a company to buy it or fund it to completion.

“In a very practical manner, I think this can be a tremendous tool,” said Col. John W. Weidner, who helps manage the U.S. Department of Energy’s National Nuclear Security Administration. “From what I’ve read, its applications are only limited by the imagination of the user.”

Weidner, who is part of a team that manages the U.S. nuclear weapons stockpile, envisioned scenarios where the United Nations would use the drones in Syria after hostilities end there to verify whether all its chemical weapons were destroyed, or in Iran to determine whether that country is making nuclear weapons.

“I see all sorts of different opportunities if this can be adopted by the appropriate agencies in our government,” he said. “Intelligence agencies could find in a relatively passive, relatively quiet, no-person way what materials are in particular locations. That could be very powerful to them.”

It also is expected to be less expensive than many of the technologies the U.S. military and law enforcement agencies are using to detect explosives, Weidner said.

Instead of spending money for expensive tracked vehicles that roll up to a suspicious package, identify and maybe detonate it, military and police agencies “can fly a drone over it, irradiate it and find out it’s full of flour,” said Weidner, who has degrees in nuclear engineering and medical physics from UW-Madison.

Because the breakthrough was so recent, there has been little time for critical assessment of the technology, but early concerns center on its use of radiation and possible limitations in detecting nuclear materials.

“Unfortunately people have this natural, sometimes irrational fear of radiation that can cause them to prejudge,” Weidner said. That could turn off potential buyers, he noted.

Kulcinski said radiation levels will be minimal — a person spending an hour in a target area would absorb about the same amount of radiation as a traveler who spends 10 minutes on an airliner flying at 30,000 feet. As a precaution, Kulcinski said, all drone operations will need to include efforts to ensure people are not in the irradiated area.

A demonstration of the drones’ capabilities is needed before anybody can get excited about them, and their ability to locate nuclear weapons shielded by lead or steel will be the ultimate test of the new technology, said Matthew McKinzie, a nuclear physicist for the Natural Resources Defense Council, a New York-based environmental group. Like Kulcinski and Weidner, McKinzie worked earlier in his career at Los Alamos National Laboratory in New Mexico.

“Detection of illicit materials is a really difficult problem, especially for the most dangerous nuclear material, which is highly enriched uranium. The radiation signal can be concealed very effectively. And an improvised nuclear device, a terrorist’s nuclear weapon, can be made most simply with highly enriched uranium. In my mind that’s the toughest case. I think that’s the greatest challenge for that system: Can it address that threat?” McKinzie said.

Weidner is hoping a government agency will pay for a demonstration of the technology to help Kulcinski and the graduate students sell it to a private interest like a drone manufacturer.

“If they can get their first customer, I think that’s what it will take for it to take off,” said Weidner.

There are known limitations to the technology. For one, the neutrons from the miniaturized source can only detect explosives buried less than three to six feet below the surface.

“One of the ways to get around the drones is to bury (explosives) very deep, but if you bury them very deep they won’t create the damage they’d create if they were a foot or so below the ground,” Kulcinski said. “So if you can get the bad guys to bury everything six feet down, then you’re making some progress.”

The Navy was hoping the drones could locate mines deep in the ocean, but the hydrogen in water slows down the neutrons and neutralizes the technology. “Unless the mine is within three feet of the surface of the water, we can’t detect them,” Kulcinski said.

The drones need to fly relatively close to the ground, so Kulcinski expects some to be shot down if they are in a combat area. “It’ll be like being at a duck hunt. That’s going to happen,” he said. “But if the bad guys are shooting them down, you know that’s an indication that there are problems in that area to worry about, and you act accordingly.”

The potential applications of the drones are broad and exciting.

Kulcinski says they could be used to help rid the world of the scourge of unexploded landmines in current or former war zones. Nearly 50 million mines lurk in 60 countries, and they kill about 10,000 people per year and leave large portions of land unused, according to the American Nuclear Society.

Japan is interested in using the technology prior to, and during, the 2020 Summer Olympics in Tokyo, Kulcinski said. One of their focuses is on detecting backpack explosives, which create a unique problem for researchers.

“Now you have a human tied to a backpack, so you have to be careful how much radiation (neutrons) you use,” he said.

The drones’ non-military applications include mapping mineral deposits near the surface of areas like mountains or deep valleys previously unreachable by humans, according to Kulcinski. Weidner said the drones could also locate people trapped in a coal mine or buried alive under rubble following an explosion or a natural disaster such as an earthquake.

Kulcinski said there are also applications for the drones to help prospect on the moon for new energy sources, including the rare fuel needed for fusion power. Aaron Olson, a Madison native and Ph.D. candidate who is part of the fusion technology team, received a scholarship from NASA for his work in that area.

The miniaturized neutron source technology also will work in stationary situations like airports or other public areas that might be attractive targets for terrorists, Kulcinski said. “If we had a low-intensity neutron source in that hall at the Brussels airport, we could have detected those bombs without hurting anybody,” he added.

The March 22 attacks in Belgium that killed 35 people and injured more than 300 were a grim reminder for the researchers to stay focused on their project.

“Clearly it’s a very important thing, more so as unfortunate things like (the Brussels attacks) continue to happen,” said Aaron Fancher, a Ph.D. candidate from Indianapolis. Graduate student Kevin Johnson also is working on the project.

Another key member was Craig Schuff, who continued his work to miniaturize the neutron source after a diving accident in Lake Monona in 2011 rendered him quadriplegic. Schuff was preparing to defend his thesis when he died last October, and his parents will accept for him a posthumous doctorate in May. “He played a significant role in this,” Kulcinski said.

Weidner praised the students for recognizing the potential of marrying their miniaturized fusion source with a new, extremely efficient power technology called rectennas that can replace the drones’ heavy battery packs that limit their flying time. The problem the rectennas solved: The slimmed-down neutron source was still heavy enough that it needed a power source on the ground — mounted on a Humvee, for example. The rectenna technology is used to beam energy to the neutron source via radio waves.

“That synergy of those technologies is what makes this, to me, so intriguing,” Weidner said. “The students’ creativity to come up with this confluence of new developments, I really give them credit for having that foresight.”

He also credited Kulcinski, who does not take a salary from UW-Madison, for his dedication to his students. “One of these days you’d think he’d want to leave it all behind so he could spend more time playing with his grandchildren,” Weidner said.

Kulcinski played linebacker for the UW football team in the late 1950s and early ’60s before earning bachelor’s, master’s and Ph.D. degrees at the university. He returned to the campus to teach in 1971, and 59 of his students have earned advanced degrees in nuclear engineering.

“The whole point is that if you’re here at this university and you’re teaching nuclear processes, it’s more than making electricity,” Kulcinski said. “That’s what my students are doing.”

101 years later, posthumous degree for UW-Madison student who left for World War I

Milton Pettit Griswold died in 1954 after years of failing to get the university to acknowledge his filled war-time engineering degree requirements.

Craig Schuff, an engineering doctoral student who died last October, will receive his doctorate from the UW-Madison in May, a rare posthumous degree for a rare individual. A diving accident left him a quadriplegic in 2011. 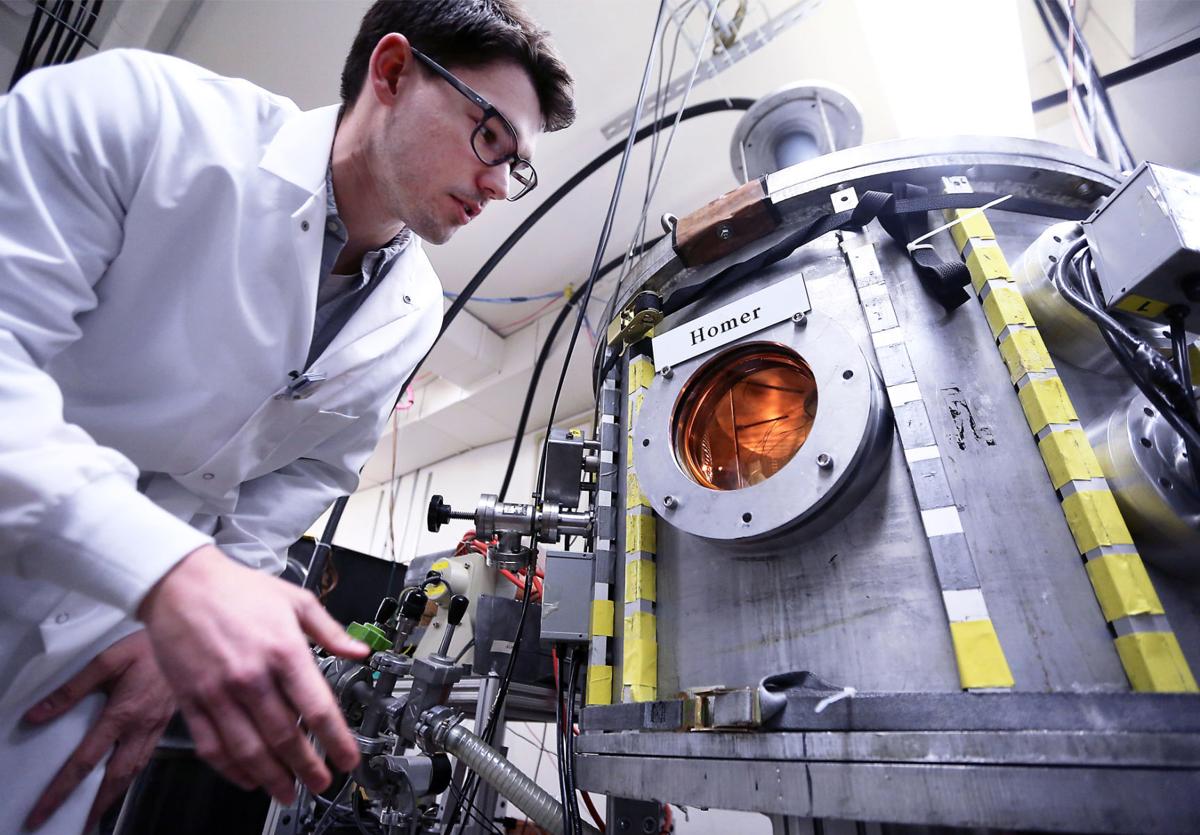 A miniature version of Homer -- the first neutron source built at UW-Madison's Fusion Technology Lab, shown here being tended to by PhD student Aaron Fancher -- can be mounted on a drone as part of a system to locate explosive devices or other dangerous materials. 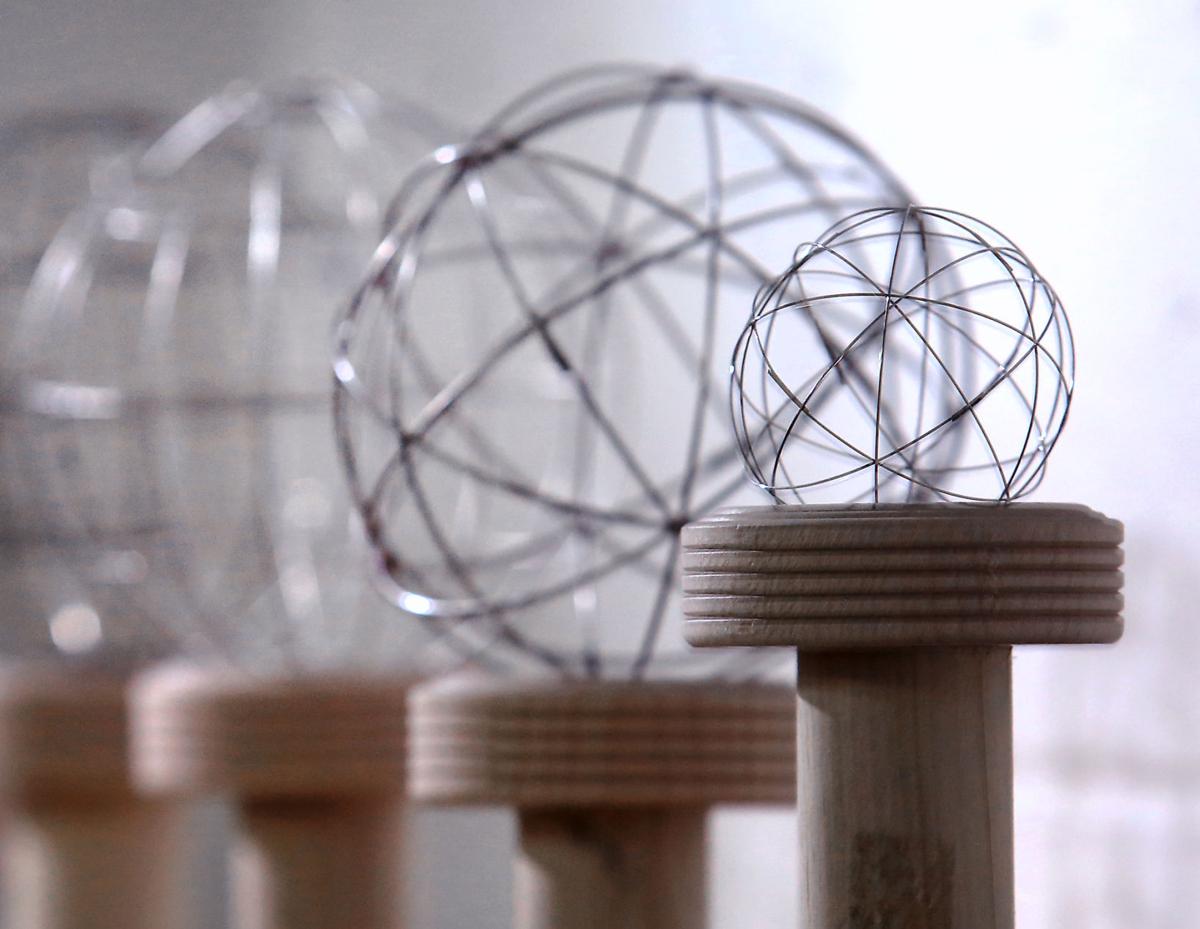 Models inside the Fusion Technology Institute in the Engineering Research Building on the campus of UW-Madison show how students have reduced the size of neutron sources over the years. 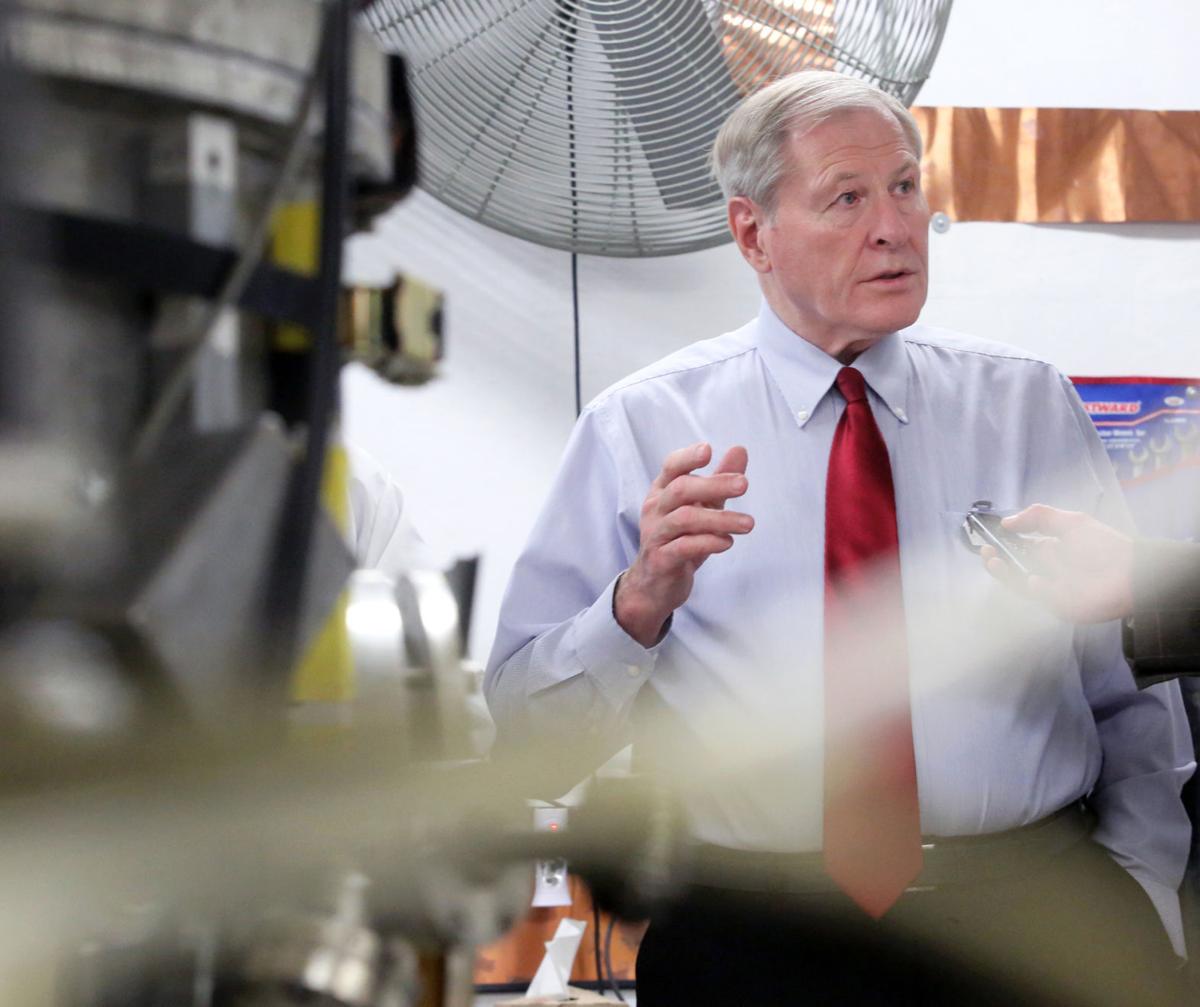 Jerry Kulcinski, emeritus professor of nuclear engineering at UW-Madison, works with his advanced graduate students in the Fusion Technology Lab in the basement of the Engineering Research building. 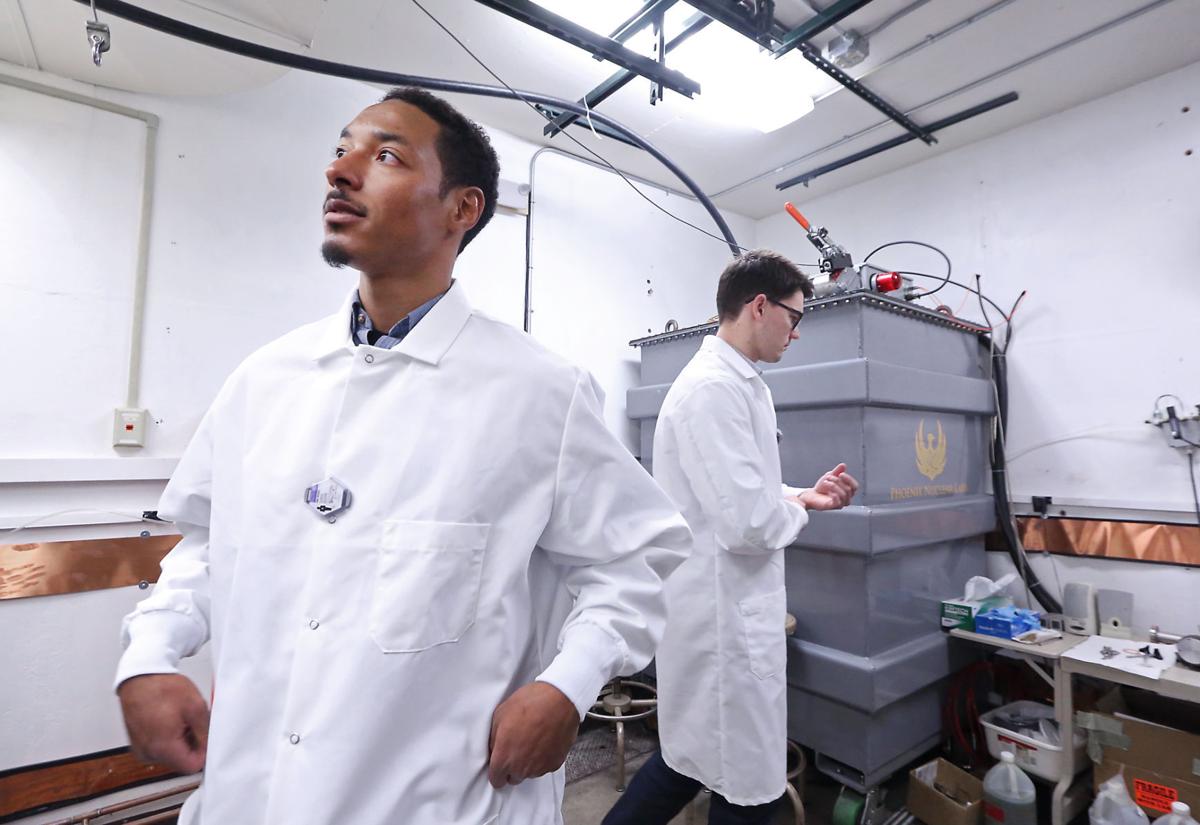 Aaron Olson, left, and Aaron Fancher are nuclear engineering PhD students involved in research work at UW-Madison's Fusion Technology Lab that is drawing interest from NASA and other groups. 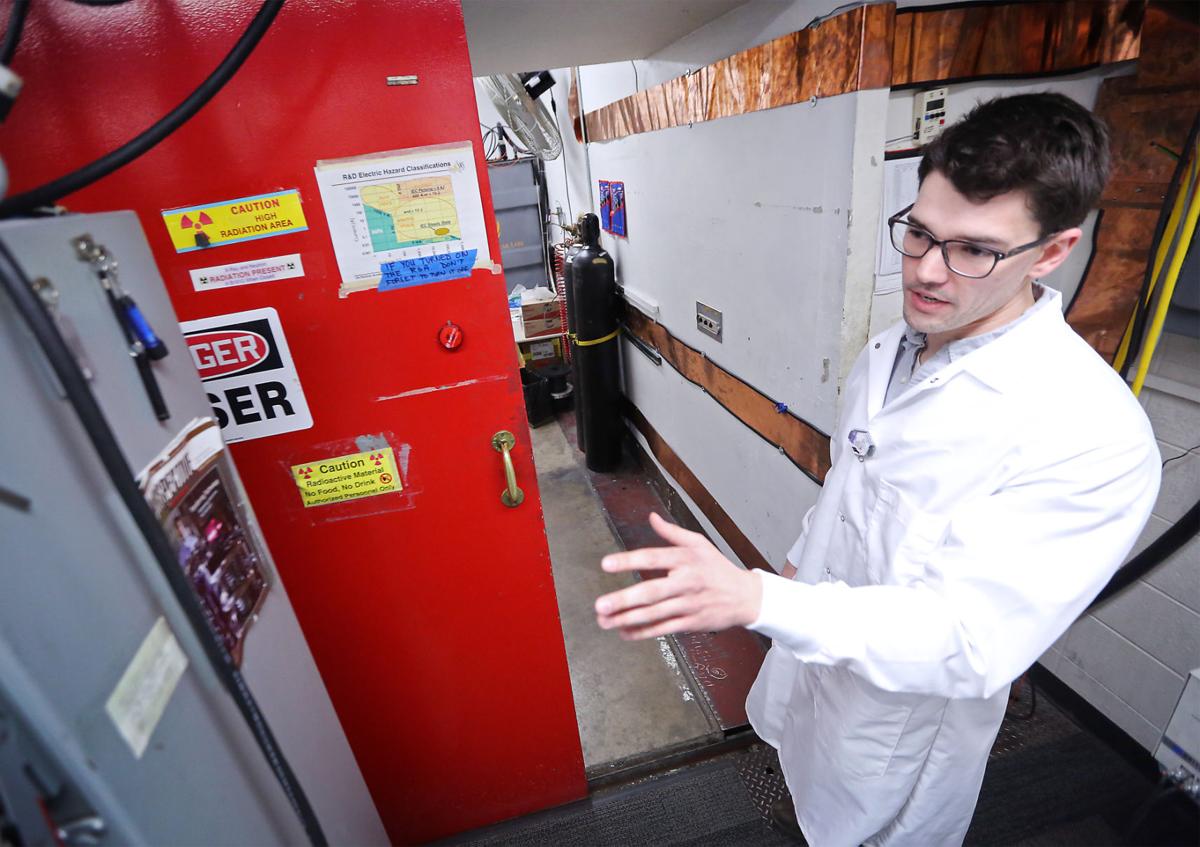 The Fusion Technology Lab has grown over the years but is still cramped with tools used by researchers such as Aaron Fancher. 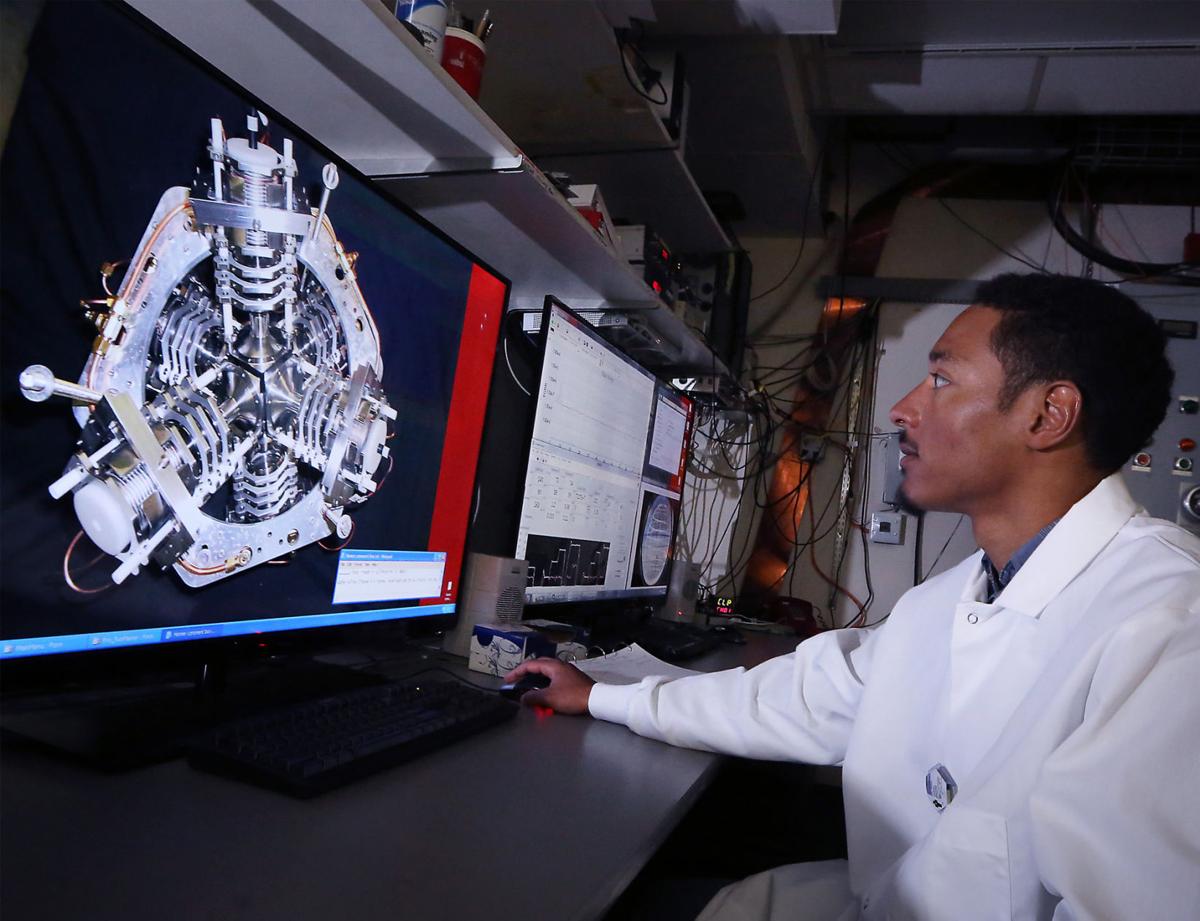 Researcher Aaron Olson views an experiment with a neutron source that is the key part of new drone technology he helped develop. 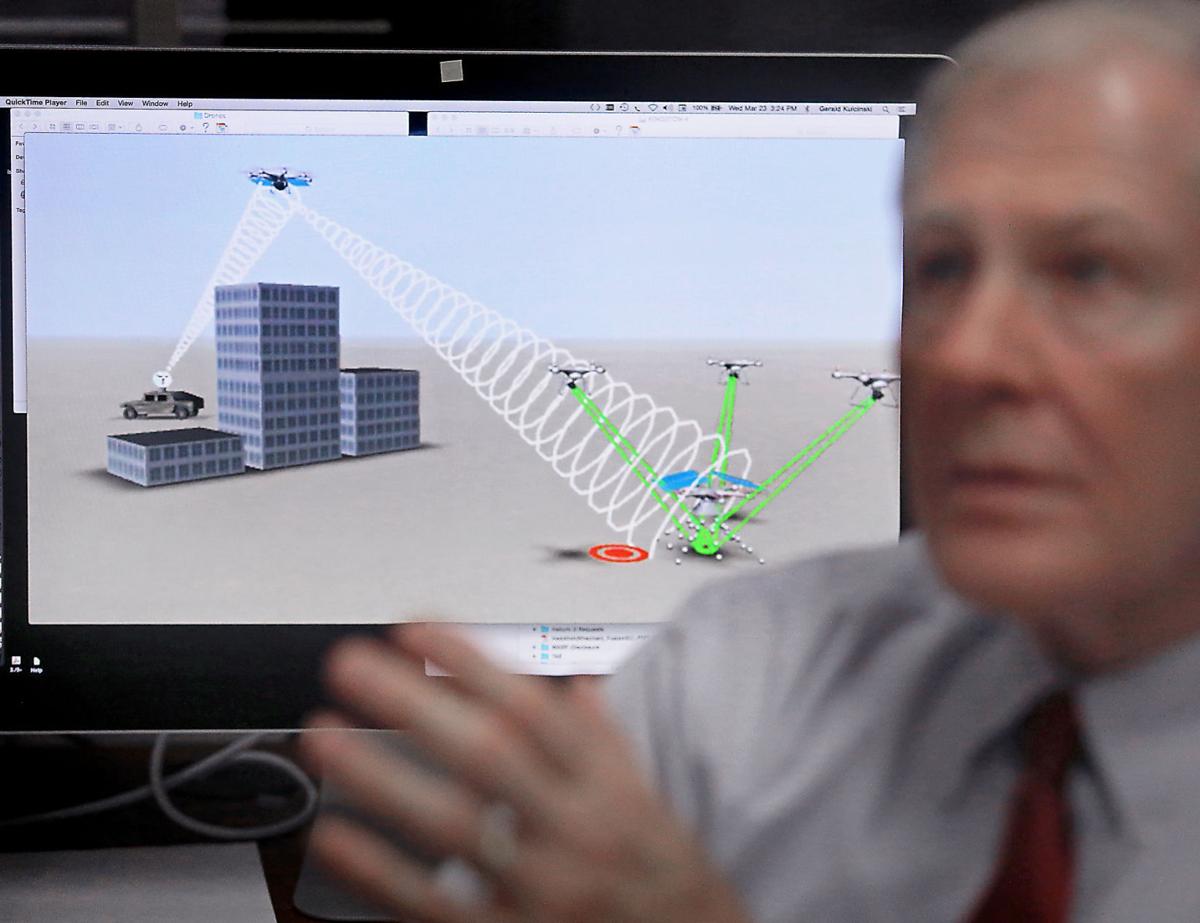 An animation of drone technology used to detect explosives is shown on a computer screen in the office of Jerry Kulcinski, emeritus professor of nuclear engineering and director of the Fusion Technology Lab.