WATERTOWN — Like any good Wisconsin fairy tale, the relationship was hatched with a chance meeting at a tavern, in this case, Heather’s Rockdale Bar & Grill near Cambridge.

Now, 17 years after Dianne Owens and Paul Elliott shared a pitcher of beer, the couple is immersed in the real world of home renovation that would make the producers of any HGTV show salivate.

Since July, Owens, a graphic artist, and Elliott, a public works foreman for the village of Maple Bluff, have combined their artistic and handyman talents to bring to life their castle-like home with a Watertown address but located on two acres of land a mile or so north of Interstate 94 near Johnson Creek.

Built with over 400 tons of Lannon stone, the nearly 11,000-square-foot home includes massive arched wooden doors on the front, its own elevator, seven bedrooms, four bathrooms, five furnaces, eight outdoor decks and grand staircases, both inside and out. A coat of armor, named Ted Knight, stands like a sentry in the living room that has an 18-foot-high ceiling.

But it will likely take another three years for the house to be completed. When Owens and Elliot purchased the property in July after selling their Cambridge home, some of the floors were not finished and there was no trim work or decorative lighting. Most of the sinks, toilets, showers or tubs weren’t connected to water, and the windows had no jams, while another 11 pallets of stone still needed to be installed on the building’s exterior.

For Owens and Elliott, this isn’t just a fixer-upper. They’re also trying to honor the wishes of Dale and Terri Roznik, who started building the house in 2008. However, the couple never moved in or completed the project because Dale died unexpectedly in 2011. The home, at one point assessed at $986,000 by the town of Farmington, ultimately went into foreclosure. Owens and Elliott bought the place for under $500,000 after more than a year of negotiations, letdowns and other potential buyers making bids but backing out.

“It was a lot of tears and a lot of anger. I had done so much legwork ahead of time (and learned) just everything about this place because I fell in love with it instantly,” Owens said as she stood in the living room. “I’m just so thankful to (the Rozniks). It’s because of her and him and their dream that I’m now literally living a dream. I’m just so grateful.”

For now, Owens and Elliott are in constant work mode in an effort to bring life to each room of the three-story house. They’re thinking about possibly renting some of it out for small weddings or corporate events, but those plans are not yet a priority.

They did, however, purchase several wooden pews from an old church in Whitewater which will likely be installed on the home’s second floor. A 24-foot-long wooden table, the top made from silo staves and supported by 6-inch square legs, will likely need to be lifted by a crane into another second-floor room that will someday host parties and family celebrations.

Owens, a student of history who has visited several castles in Ireland over the years, is also planning to grow wisteria, so the plant’s vines can cover the home’s exterior and further add a medieval feel to rural Jefferson County.

“Her mind never stops,” Elliott said of his wife, who has yet to call in a contractor, although family members have also assisted. “Between all of us, there’s nothing that we can’t do, except for stone work.”

The story of the house was chronicled by Steve Sharp of the Watertown Daily Times in 2009. He was accompanied by photographer John Hart who also worked for the daily paper at that time but since 2010 has been with the Wisconsin State Journal. Hart got the assignment when we made the Nov. 5 tour with Owens and Elliot.

The last time Hart was there, the driveway had a sign naming it “Roznikland Road.” Owens favors naming her new home Wisteria Castle.

Dale Roznik, an oral surgeon who did work in Oconomowoc, Brookfield, West Allis and Milwaukee and taught anatomy at Marquette University, told Sharp that a trip to Germany by him and his wife planted the seed for a house that resembled a castle. Roznik, who had a degree in electrical engineering and had experience in home repairs as a longtime Milwaukee-area landlord, also insisted on doing much of the $650,000 worth of stone work himself along with the contractors.

The Rozniks, in 1997, had purchased 200 acres of farmland but didn’t begin construction until 2008. There were stops and starts on the project, meetings with the county over zoning and a legal appeal that ultimately led to restarting construction.

“It is stunning how well things worked out. It flowed really well and the rooms are what I wanted,” Dale Roznik told Sharp. “We didn’t have any particular castle in mind. We would just take ideas for things like doors (from other castles) that you could match and it’s somewhat practical in terms of the sizes of the towers.”

But in January 2011, with the house incomplete, Roznik died at age 57 “trying so hard to make the world better, trying to get a lifetime of memories with his family and friends, to see his dreams with Terri fulfilled,” according to his obituary.

Some work went on in the house after Roznik’s death to make it marketable, but it sat empty for the next nine years.

Now it’s in a near-constant state of construction.

Owens, 54, grew up in Burlington and since 1997 has had her own graphic design company where she creates logos, brochures and direct-mail pieces for corporations, non-profits and political organizations.

Elliott, 56, is a Madison East High School graduate who spent time working at restaurants and as a lineman and splicer for a telecommunication company but has been with the village of Maple Bluff for the past eight years.

The couple, with three grown children between them, married in 2005 and built a home in Cambridge in 2006. But in April 2019, a realtor friend, who wanted to see the inside of the castle house, asked Owens if she would ask for a tour as a qualified buyer. Owens agreed and fell in love with the place at first sight.

“I knew that this place was meant to be for me,” said Owens. “I’m just thankful I have a husband who wanted to go for a ride on this.”

The couple has saved thousands of dollars with their project thanks to their own work that has been bolstered by a fully functioning workshop located in a nearby building that came with the house. It includes an industrial lathe, plasma cutter, grinders, sanders and a milling machine. Owens is also a sleuth for bargains on the internet and second-hand shops and is using the shop as a staging area for some of her larger purchases.

She has tracked down four matching chandeliers for about $400, a wooden bedroom set for $600 and a fancy-looking buffet with a matching armoire for $250 she purchased from a couple who had inherited it from an aunt but were storing it in a garage. The home’s massive wooden front doors that cover a 6-foot-wide opening were there when they bought the place, but Owens found a set of gigantic metal keys at a thrift shop as a finishing fantastical touch.

A 20-foot-wide, 7½-foot-high metal gate was purchased from a farmer near Evansville for $650 and will someday be installed at the end of their driveway. Owens and Elliott are debating where to place two 3-foot-high concrete lions.

“We’re doing this on a very, very tight budget,” Owens said. “People passed this place up because there was so much work. They couldn’t see past the drywall and the dust and everything. But I’m in heaven.”

Barry Adams covers regional news for the Wisconsin State Journal. Send him ideas for On Wisconsin at 608-252-6148 or by email at badams@madison.com.

Photos: A castle comes to life in rural Jefferson County

Construction began in 2008 but new owners are in the midst of trying to finish the project after the original owner died unexpectedly in 2011. 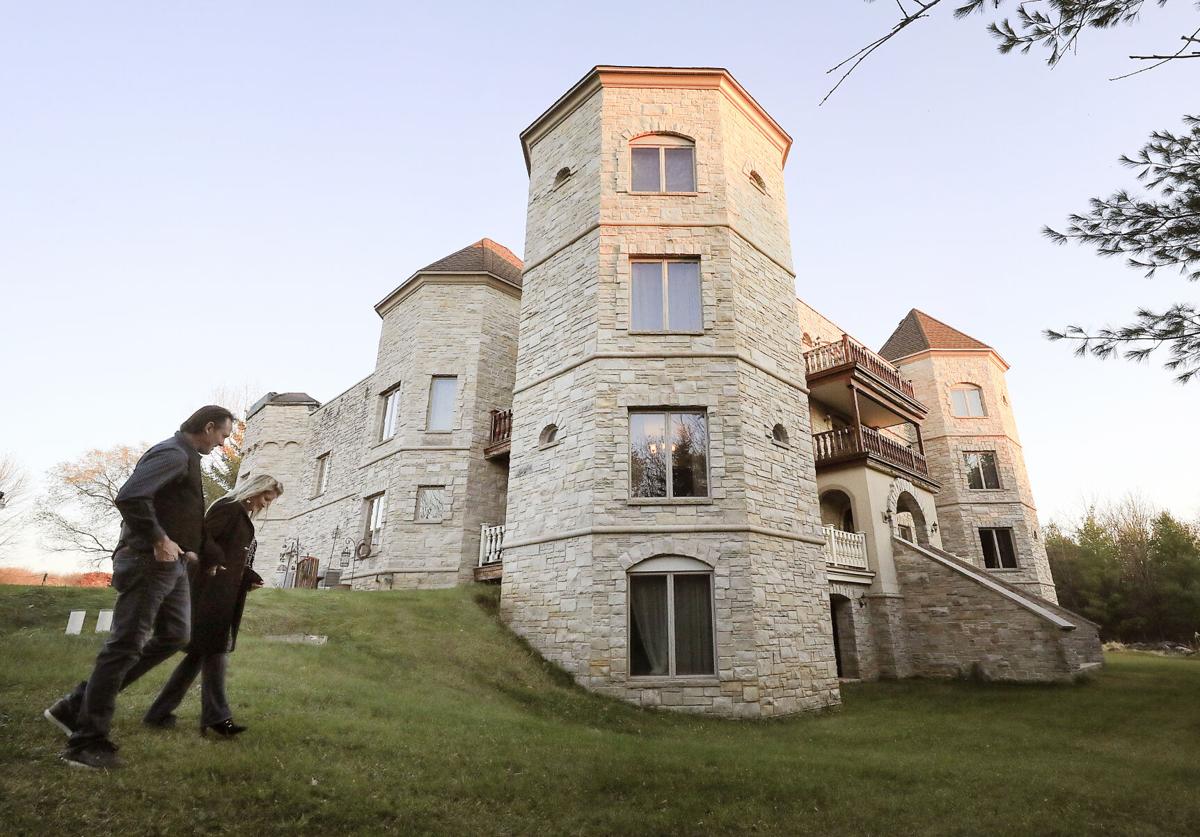 Dianne Owens and Paul Elliott walk their 2-acre property in Jefferson County that is home to their 11,000-square-foot house that resembles a castle. Construction began in 2008 by another couple but came to a halt after one of them died unexpectedly. The home sat empty and unfinished for nine years before Owens and Elliott purchased the property in July. 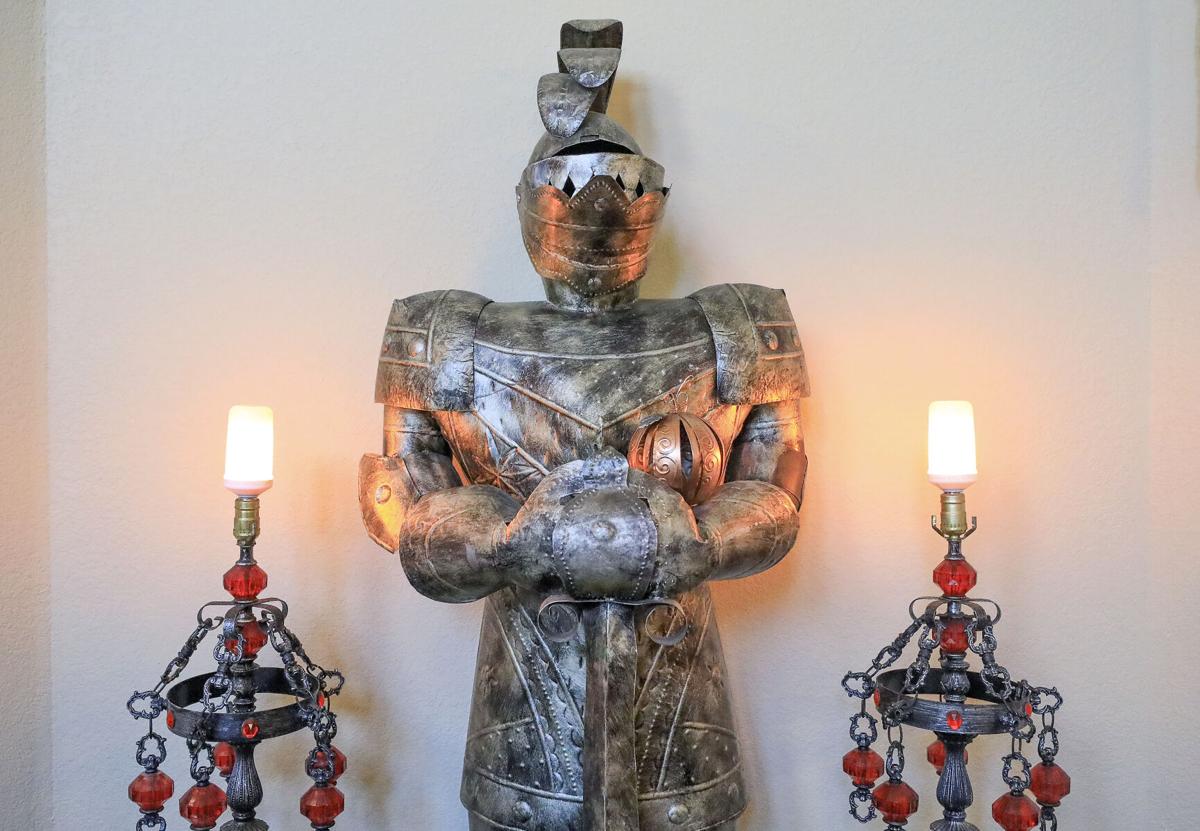 This coat of armor, dubbed Ted Knight, was purchased from a seller in La Crosse and is one of the centerpieces of the living room of Owens and Elliott. 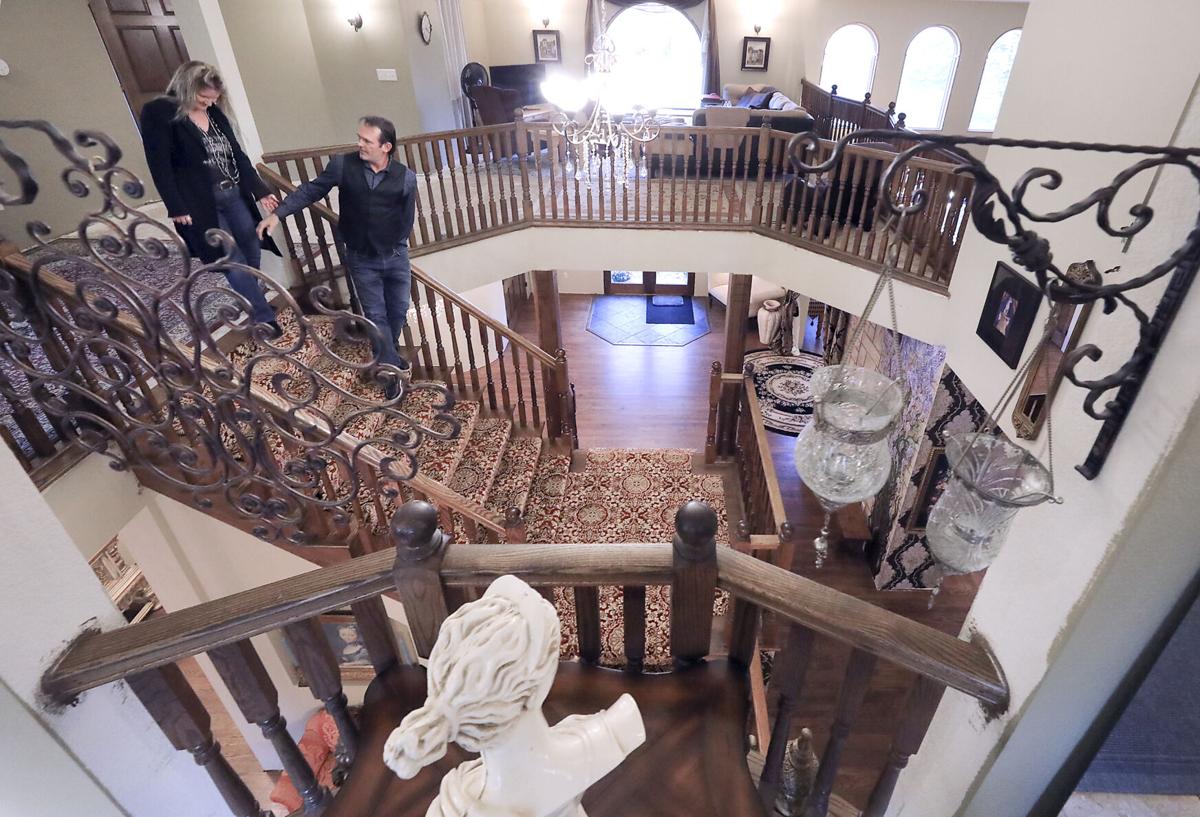 Dianne Owens and Paul Elliott descend the main staircase of their castle-like house in rural Jefferson County. The home, located between Watertown and Johnson Creek, was built in 2008, but most of the interior was unfinished when the couple purchased it in July. 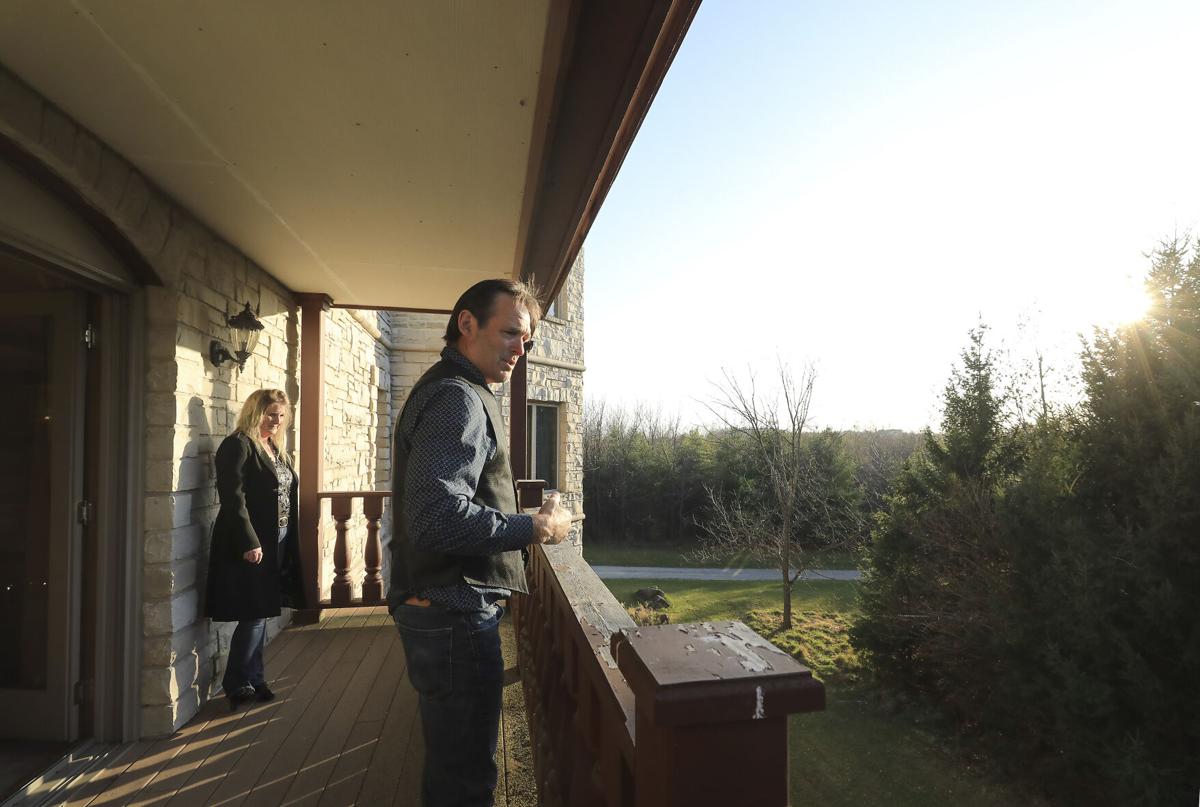 Owens and Elliott look out over the countryside from one of the eight outdoor decks on a home that resembles a castle. 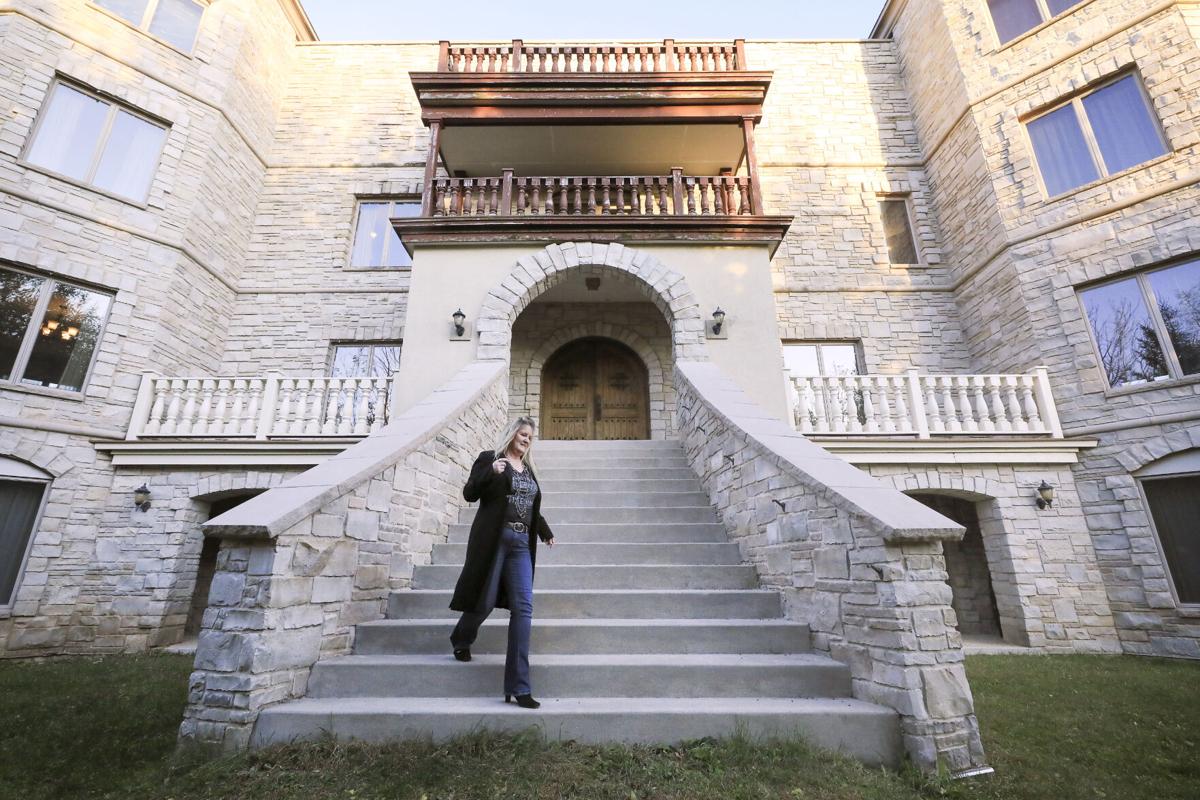 Dianne Owens walks down the front steps of the home she shares with husband Paul Elliott. The couple have spent most of their free time finishing the interior of the seven-bedroom, four-bath home. 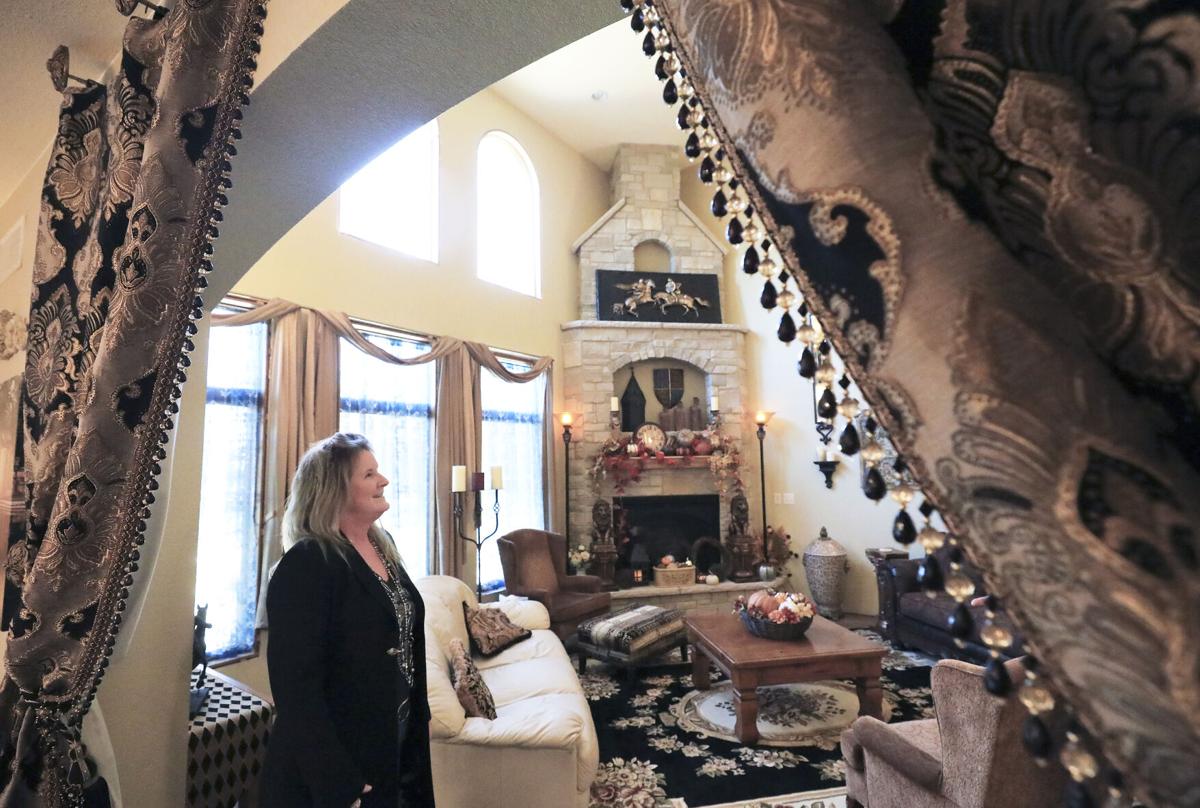 Dianne Owens is seen from the home's front foyer looking into the living room that includes a fireplace and an 18-foot ceiling. 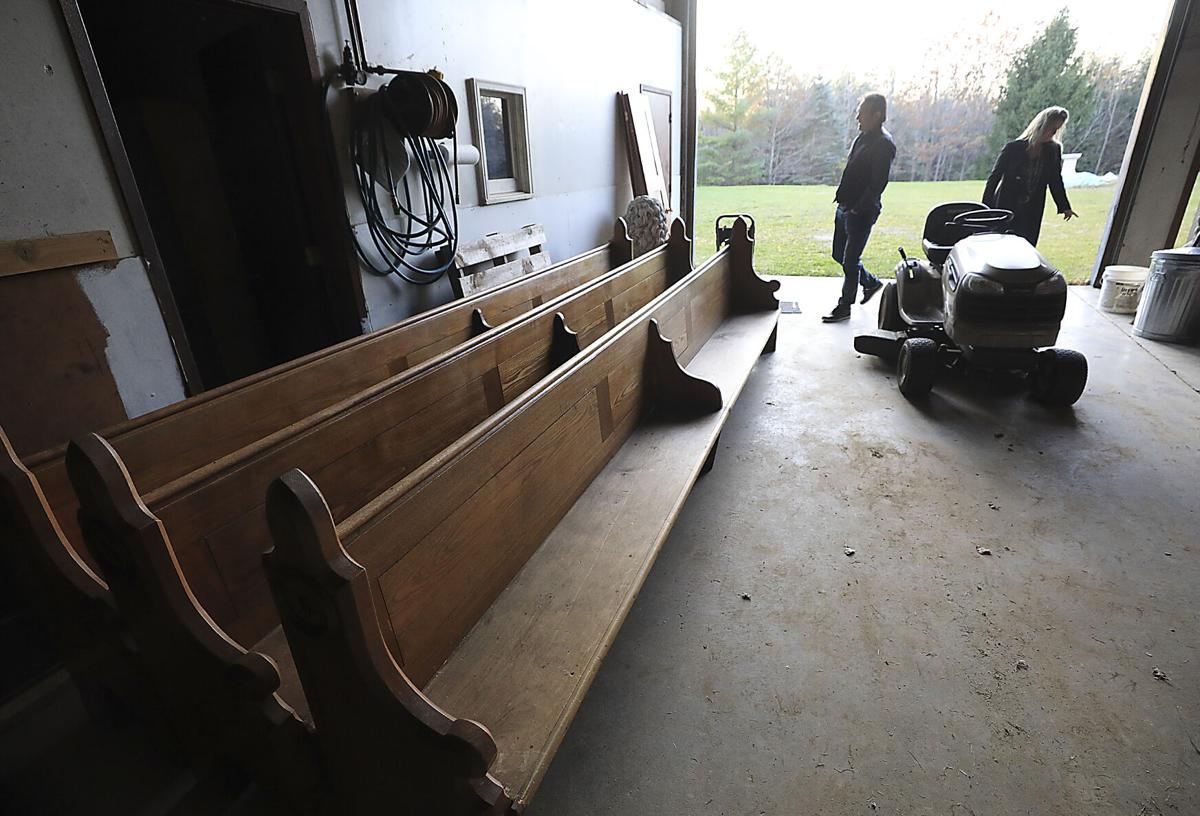 Wooden pews from a church in Whitewater were purchased by Dianne Owens and Paul Elliott, who want to create a chapel inside their home south of Watertown. The pews are currently in a workshop along with pallets of stone for the home's exterior and a 24-foot-long table that will go in a second-floor event space. 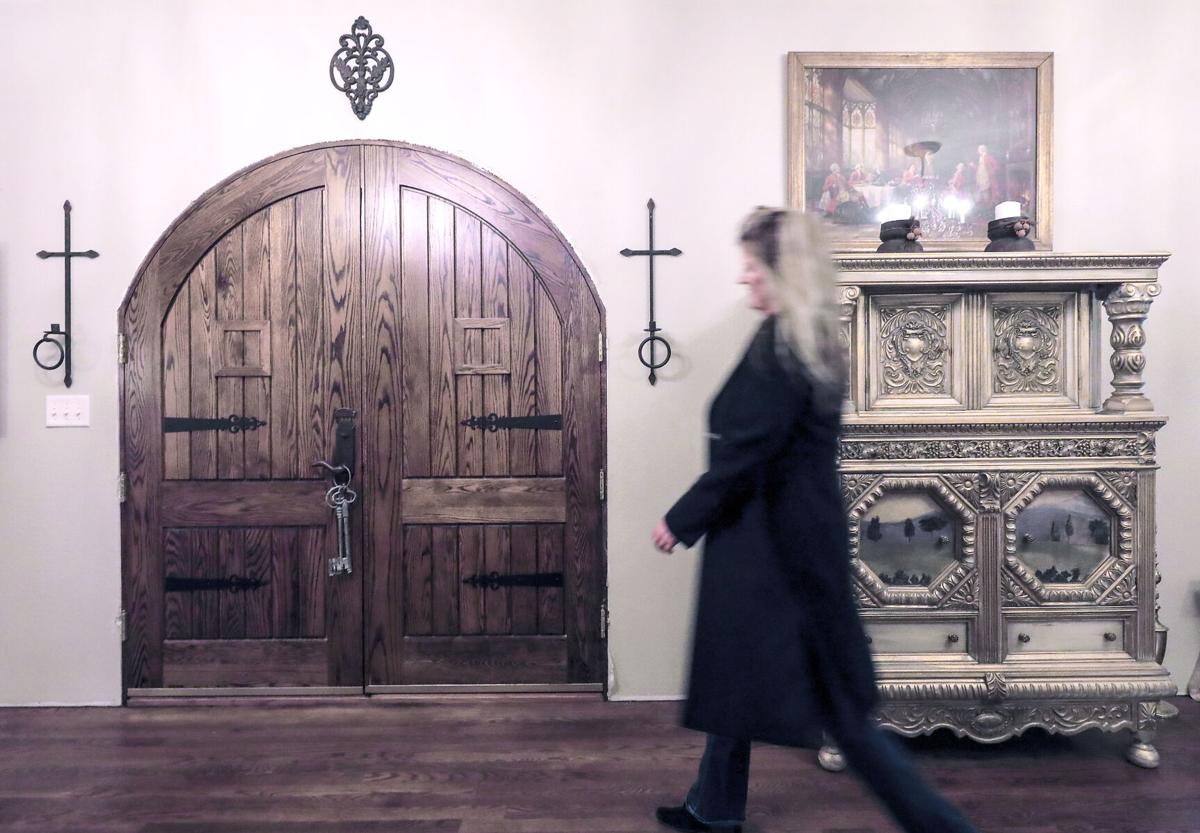 Dianne Owens approaches the 6-foot-wide front entrance of her home in rural Jefferson County. The house, designed like a castle, also has an elevator, five furnaces and five air conditioning units. 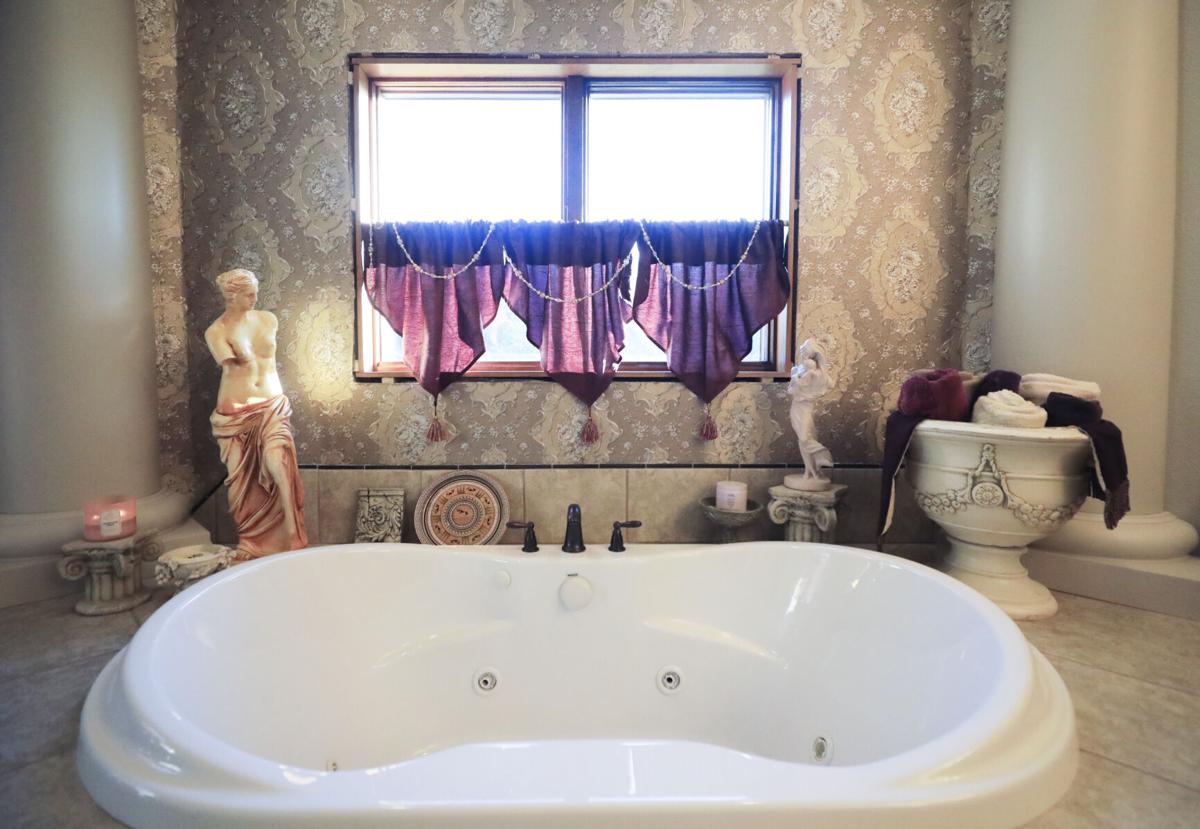 The master bath is one of four bathrooms in the nearly 11,000-square-foot home of Dianne Owens and Paul Elliott.