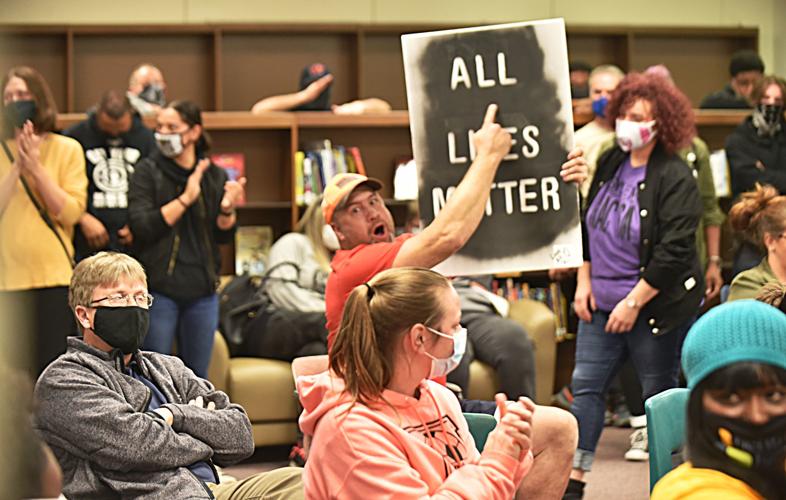 Amid a shouting match during a Burlington Area School Board meeting Nov. 9, Matt Allen points to his "All Lives Matter" sign while others chant "Black Lives Matter." 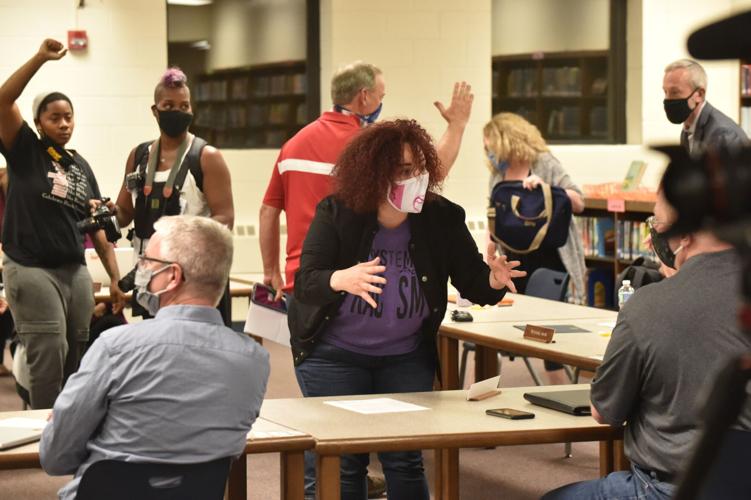 A demonstrator tries to speak with Burlington Area School Board members moments before the School Board exited Karcher Middle School's library on the night of Monday, Nov. 9, as protesters shut down the meeting with chants when calls for the school district to take up an anti-racism curriculum were not immediately addressed.

BURLINGTON — A Burlington Area School Board meeting ended Monday night with chanting, arguments, School Board members walking away and a police presence.

The issue at hand was a proposal that BASD adopt an anti-racism policy and curriculum, which advocates have demanded but others in the community have opposed and the School Board has not adopted. Such polices have been internally discussed since March.

The demands have been made after numerous allegations of racism in Burlington schools, with critics saying the school district has done little to discourage such behavior. Several of the young people who spoke Monday said that, while attending Burlington schools, they were called out for their race, on the receiving end of racial slurs, had been spit on and were physically hurt because of their race.

Action may have taken place Monday, but the meeting was called off before the board was even halfway through with the night’s agenda. Julie Thomas, BASD’s communications director, told The Journal Times in an email Tuesday morning she did not know when the items from Monday’s agenda may be taken up again.

Two allegations regarding the use of the racial slurs within Burlington High School came up in just the past two weeks:

1. A virtual high school class was interrupted by an unknown person who repeatedly yelled the N-word; one student of color was in the classroom. Burlington High School has confirmed this incident and says that the Burlington Police Department is investigating.

The first hour of Monday’s meeting went mostly as planned: With contentious and loud but mostly orderly public comments. Arguments broke out between people who carried “All Lives Matter” signs and opposed including education about Black Lives Matter in school curriculum, and those affiliated with Burlington Coalition for Dismantling Racism who carried “Black Lives Matter” flags and demanded more acknowledgment of racial issues and of America’s often overlooked history of racism in the classroom.

“We’re not saying Black lives don’t matter. We’re saying Black Lives Matter Incorporated should not be included in a curriculum,” a man who identified himself as Robert Jensen said during the meeting.

Later in the meeting, Preston Allred, who is Hispanic and said he is the only one of his siblings to not transfer out of the Burlington Area School District, described a time that after another student repeatedly called him a racial slur, he grew angry and got into a fight. Despite the slurs, Allred said he was punished and told by a teacher to “be the better man” and that the other student went unpunished.

“I went to the school. It happens on the daily,” Allred, now 21, told the School Board of his experiences with racism.

When the School Board tried to move forward with the meeting, with one member beginning to talk about a National Honor Society meeting after an hour of citizen comments, the group of about 50 demonstrators — some of whom were from Burlington, others who were supporters from Milwaukee — became frustrated with their demands not being immediately addressed and began chanting.

Chants calling for justice — such as “If we don’t get it, shut it down,” and “All lives can’t matter until Black Lives Matter” — echoed through the Karcher Middle School library, the site of the meeting.

Although School Board President Rosanne Hahn had previously tried to calm both sides of the crowd — saying “I don’t want to adjourn the meeting; I want you all to have the chance to talk” — the School Board gave up on trying to continue with the meeting and walked out.

Minutes later, as chanting continued and a few groups from both sides attempted to have conversations amid the din, about a half-dozen uniformed officers from Burlington Police and the Racine County Sheriff’s Office arrived and ushered everyone outside.

Although one scuffle nearly broke out after an officer, who was escorting a couple of people out of the building, pushed a vocal demonstrator approaching him, the night ended without violence.

“We are nonviolent, but we are not peaceful,” one woman said outside before promising that protesting would continue until anti-racism policy and curriculum is required in the Burlington Area School District.

“They was not expecting this,” another man said. “They were not expecting us to shut it down the way we did. That’s what they used to, sweeping it up under the rug.”

In photos: Protesters shut down Burlington School Board meeting Nov. 9, 2020

In photos: Protesters shut down Burlington School Board meeting Nov. 9, 2020

Laura Bielefeldt with her fist in the air

Press looks on as comments are made

Moments before School Board members exit

Fists up as School Board meeting has been shut down

End of the meeting, start of the protest

Law enforcement arrives in the library

Find this story at JournalTimes.com to see a video of what took place at Monday's BASD School Board meeting, and to read the school district's draft proposals for strengthening its anti-bullying and anti-harassment measures.

The Burlington Area School Board held a special virtual meeting earlier today to move forward with a proposed anti-racism policy, setting up a possible vote on formal adoption at the board's next meeting.

Religious leaders from across Wisconsin are pledging to support Burlington's anti-racism movement as it grows in volume and visibility. "Burlington, look out. This is not the last time you'll hear from us," said one reverend from Milwaukee.

With police officers in the building, Burlington school board returns to tense in-person race discussions

BURLINGTON — With at least four police officers on site and a packed meeting space, the Burlington Area School District on Monday night held i…

In PHOTOS and VIDEOS: A November 2020 anti-racism demonstration and car caravan in Burlington

A look at what happened during a Black Education Matters Demonstration and car caravan in Burlington Monday.

Amid a shouting match during a Burlington Area School Board meeting Nov. 9, Matt Allen points to his "All Lives Matter" sign while others chant "Black Lives Matter."

Demonstrators disrupt a Burlington Area School Board meeting Nov. 9 after emotions boiled over about a proposed anti-racism policy in the district.

A demonstrator tries to speak with Burlington Area School Board members moments before the School Board exited Karcher Middle School's library on the night of Monday, Nov. 9, as protesters shut down the meeting with chants when calls for the school district to take up an anti-racism curriculum were not immediately addressed. 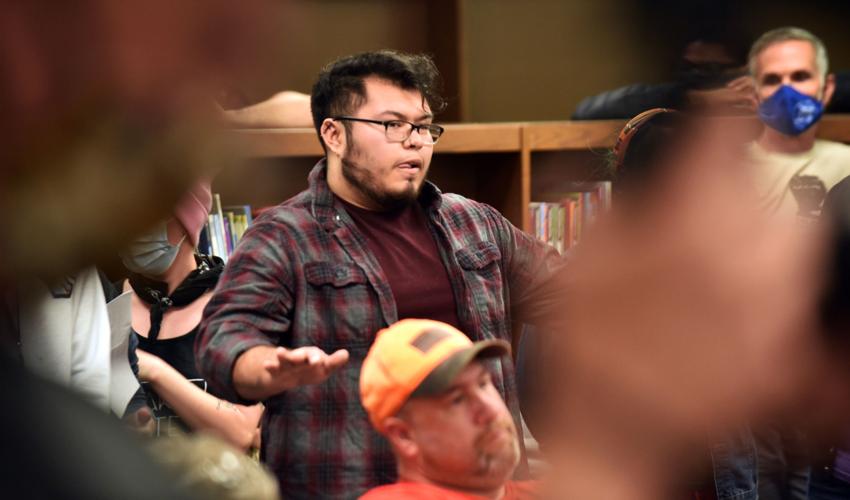 Preston Allred tries to keep the packed Karcher Middle School library quiet when it came his time to speak about incidents of racism he said he experienced while attending Burlington Area School District during Monday night's School Board meeting.