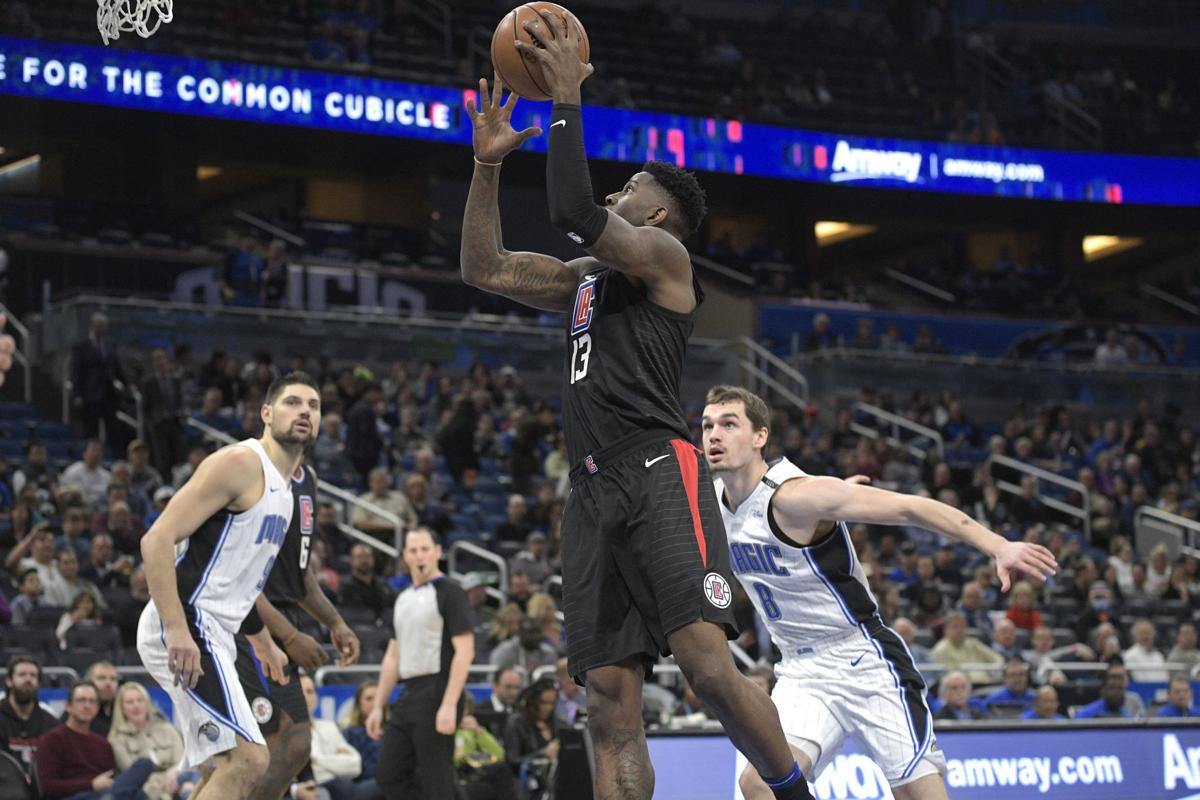 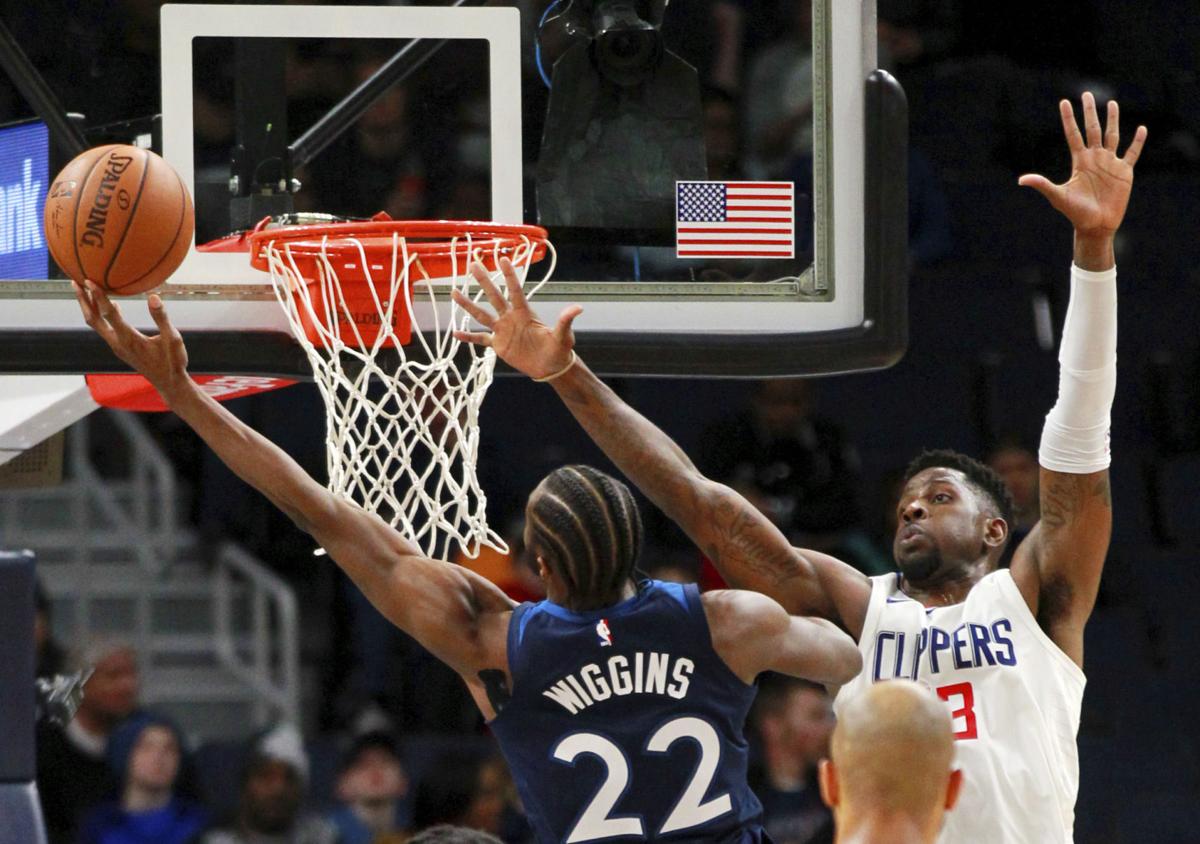 Minnesota Timberwolves forward Andrew Wiggins (22) shoots in front of Los Angeles Clippers forward Jamil Wilson (13) in the third quarter of a game on Dec. 3 in Minneapolis. The Timberwolves defeated the Clippers 112-106. 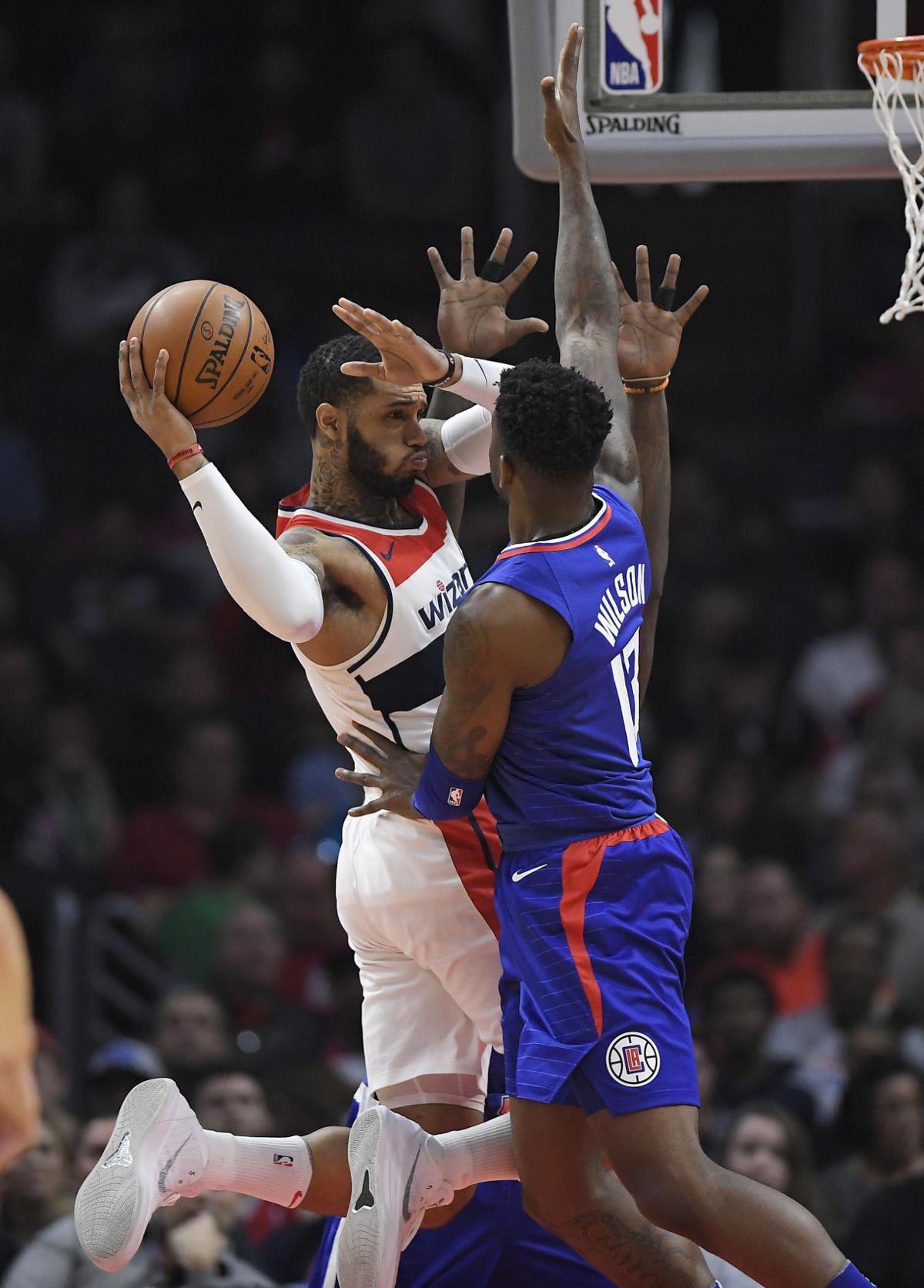 Los Angeles Clippers forward Jamil Wilson forces Washington Wizards forward Mike Scott to pass the ball during a game on Dec. 9 in Los Angeles. Wilson, who attended Horlick High School and Marquette University, has moved into the starting lineup for the Clippers.

Right now, at least, the odds are heavily stacked in James Wilson’s favor.

As for Jamil Wilson, James’ son? Not so much.

After Jamil staged a long-distance shooting clinic in the NBA Summer League in Las Vegas in July, he and his father made a friendly wager.

Wilson will have his work cut out for him if he hopes to collect. The 27-year-old former Marquette University and Horlick High School star is shooting 43 percent from 3-point range — still an excellent percentage — for the Los Angeles Clippers.

But before anyone dismisses Jamil’s chances of having his father buy him dinner at one of his favorite local restaurants, remember this: He isn’t a stranger to beating so-called insurmountable odds. Just the mere fact he is playing in the NBA is a testament to that.

Path to the NBA

Wilson, a 6-foot-7 forward, seemingly had little chance of playing in the NBA after he was bypassed in the 2014 NBA draft. The odds got increasingly worse in the succeeding years.

Wilson became a basketball vagabond, playing one season for the Bakersfield (Calif.) Jam and another for the Texas Legends in what was then the NBA D-League. He then played for Cangrejeros de Santurc in San Juan, Puerto Rico, and then for Auxilium Pallacanestro Torino in Turin, Italy.

By his own admission, Wilson thought his dream of playing in the NBA was fading into oblivion.

“I think every person that is looking to achieve their dream, at some point along their journey, thinks it might be out of reach,’’ Wilson said. “Then, you get down to what you really want in life.

“I’m not going to lie about it. When I was in Italy, it was a crossing point for me. I wasn’t seeing any real NBA interest and I decided if nothing happened I’d continue my career over there. I could play in Europe until I was 38 or 39. As long as you can shoot the ball, you can play over there. I thought I’d be over there a while.’’

But then Wilson got an unexpected call from his agent, Steve McCaskill. Wilson was told by McCaskill that Sam Cassell, the former Milwaukee Bucks point guard who is now an assistant coach for the Clippers, had inquired about him and wanted Wilson to play for the Clippers’ summer league team.

That proved to be a godsend. Wilson went to the Las Vegas Summer League and acquitted himself quite nicely — especially with his perimeter shooting. Wilson impressed Clippers officials enough to garner a “two-way’’ guaranteed contract, one in which he could play with the Clippers and the Agua Caliente Clippers of Ontario, Calif., their NBA G League affiliate.

Wilson spent the first 15 games with the Clippers watching — either being inactive or suiting up but not playing. On Nov. 20, Wilson got on the court, getting mop-up minutes against the New York Knicks in historic Madison Square Garden.

“It was a pretty awesome moment,’’ Wilson said. “And it came a day before my birthday. I turned 27 the next day. Making my debut there was something special.’’

It got even better. On Dec. 3, Clippers head coach Glenn “Doc’’ Rivers, a former Marquette University star himself, decided to insert Wilson into the starting lineup against the Minnesota Timberwolves at Minneapolis.

Not only was his first NBA starting assignment a moment Wilson will never forget, it also came against his old Marquette teammate and friend Jimmy Butler, now a star for the Timberwolves.

“That was special, having gone to school with Jimmy and having played along with him at Marquette,’’ said Wilson, who scored nine points in 28 minutes in that game. “He has had a great influence on my basketball career.’’

Yet, as memorable as his first NBA game and start were, Wilson acknowledged it wasn’t the “coolest’’ moment of his storybook. That occurred about two weeks ago when the Clippers took on the Spurs in San Antonio.

Wilson scored a career-high 13 points — his season average is 7 points — to go along with three steals. A nice game, for sure. But it was what occurred after the game that thrilled Wilson.

“Gregg Popovich came up to me and shook my hand,’’ Wilson said of the Spurs’ head coach. “He said, ‘Great job. Keep getting better.’

What Wilson has accomplished this season IS big. According to the Elias Sports Bureau in New York, there are only two other undrafted rookies who have started more games in the NBA this season: Maxi Kleber of the Dallas Mavericks and Mike James of the Phoenix Suns.

What’s more, Wilson has been receiving major minutes. In eight straight games, he played between 21 and 28 minutes before being replaced in the starting lineup on Friday night by Clippers All-Star forward Blake Griffin, who had been sidelined with a sprained left medial collateral ligment.

A pragmastist, Wilson knows he isn’t guaranteed anything, especially with Griffin back on the floor.

“It’s been quite the journey and I obviously want to stay here,’’ said Wilson, who scored a career-high 17 points Tuesday night against Sacramento. “I know when Blake gets back, things will be different. Hopefully, I’ve made a good enough impression on them.’’

Minnesota Timberwolves forward Andrew Wiggins (22) shoots in front of Los Angeles Clippers forward Jamil Wilson (13) in the third quarter of a game on Dec. 3 in Minneapolis. The Timberwolves defeated the Clippers 112-106.

Los Angeles Clippers forward Jamil Wilson forces Washington Wizards forward Mike Scott to pass the ball during a game on Dec. 9 in Los Angeles. Wilson, who attended Horlick High School and Marquette University, has moved into the starting lineup for the Clippers.