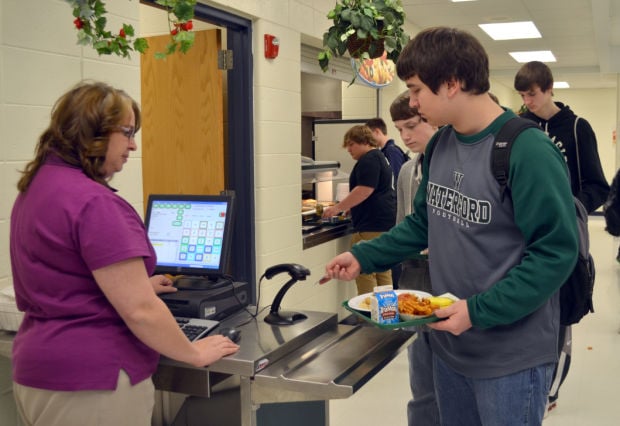 A student pays for food, including ala carte fries, during lunch at Waterford High School, 100 Field Drive, on Thursday, March 20, 2014. The school could not serve the fries in the coming 2014-15 school year under new National School Lunch Program food healthiness requirements. / Lindsay Bullock lindsay.bullock@journaltimes.com 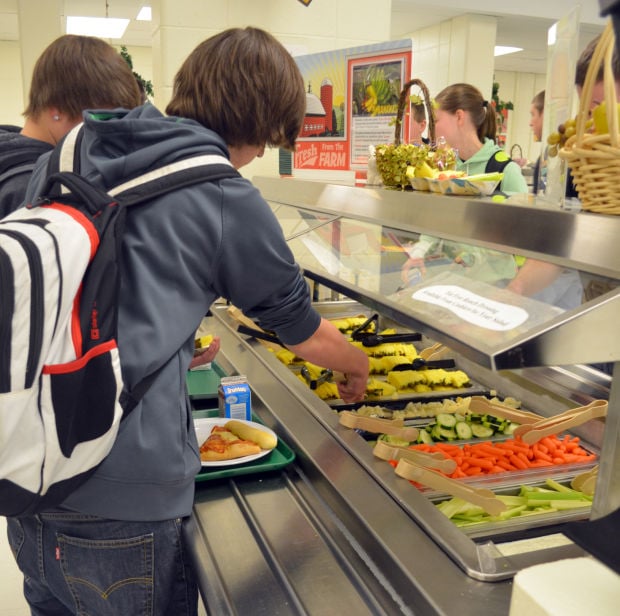 Students take fruits and vegetables during lunch at Waterford High School, 100 Field Drive, on Thursday, March 20, 2014. Students are required to take the produce every day under the National School Lunch Program, but school officials say much of it ends up in the garbage. / Lindsay Bullock lindsay.bullock@journaltimes.com

WATERFORD — New federal requirements that foods sold in schools be healthier have some area school districts opting out of the federal lunch program that provides subsidies for serving free or reduced-price meals to low-income students.

The Waterford Graded and Waterford High School districts have weighed their options and decided they’d rather forego the money and serve what they want. They’ll continue to cover the costs of low-income students’ meals — likely by spending less on fruits and vegetables that students simply throw away, and by serving slightly less healthy but overall tastier meals to increase lunch participation among paying students, officials from those districts said.

Waterford Graded’s School Board unanimously voted in January to leave the National School Lunch Program for the coming 2014-15 school year, when the new food healthiness requirements will be in effect, said District Administrator Chris Joch.

The Waterford High School Board unanimously made the same decision on Wednesday, said Superintendent Keith Brandstetter.

The National School Lunch Program previously required participating schools make lunches healthier by doing things like serving more fruit and a greater variety of vegetables; offering only low- or non-fat milk; and eliminating trans fat. Further requirements for the 2014-15 school year will limit sodium and require all grains be “whole-grain rich,” according to the U.S. Department of Agriculture.

Additional changes that take effect in July will apply similar requirements to other food sold at schools during the school day, like items in the a la carte lunch line or in vending machines, according to the USDA.

Those changes would be especially problematic for Waterford High School. A coffee shop run by special education students would likely have to close given the calories and sugars in specialty coffee drinks, Brandstetter said. The school’s a la carte revenue would also likely decline, according to Taher, the high school’s food service vendor.

And, when it comes to the meals themselves, the requirements “just restrict us a little too much,” Brandstetter said. Students have complained about taste, portions are not big enough for athletes and dollars get wasted on fruits and vegetables that students must take but often throw away, he said.

“The taste has gotten a lot worse and the portions have gotten a lot smaller,” said junior D.J. McGilvary. “The pizza my freshman year tasted good, and now it tastes like cardboard. And nachos — there’s a lot less chips than there used to be.”

Junior Austin Mealy said the school lunches leave him hungry in the afternoon at track practice.

“Most of us are athletes and we need more food,” he said.

Similar concerns about the food were part of Waterford Graded’s decision. Plus, “the prevailing sentiment among the board members (was) that the federal government’s having too much influence or control in that area of school programming,” Joch said.

Without the federal program, Waterford students’ meals will still be healthy, Joch and Brandstetter said.

“It’s not like we’re serving them pure sugar,” Brandstetter said. “It’s probably no different than you’re serving your kid at home.”

Waterford High School has 14 percent of its students getting free or reduced-price meals. Without federal dollars paying for those meals, the school will have to come up with about $53,000 each year. That’s roughly 10 percent of the approximately $518,000 it spends on food service annually; money from paying students makes up the rest of that amount, Brandstetter said.

He hopes to recoup those federal dollars and keep his food service budget balanced by spending less on garbage-bound fruits and vegetables, and by making meals — and a la carte items — tastier so more kids buy them.

“The rationale is there’s going to be less waste and they can serve a better product and they can sell more, which will increase profit and will offset some of the other losses,” Brandstetter said.

In Waterford Graded, 19 percent of students get free or reduced-price meals, Joch said. The amount of federal money received for those meals and the total cost of the district’s food service program were not available Friday.

The district has asked food service vendors to include deficit abatement plans when applying to work with its schools. Like Brandstetter, Joch also hopes better food will lead to more buyers. But, he added, dollars in the district’s general fund could be used to offset losses if necessary.

Other Racine County districts may follow the two in Waterford. The Dover School District Board, for example, has been talking about leaving the National School Lunch Program because of concerns about the new regulations and resulting food quality, said District Administrator Matt Stratton.

This week, news that the Waterford Graded and Waterford High School districts opted to leave the National School Lunch Program brought to ligh…

RACINE — Racine Unified will not be leaving the federal lunch program, which provides subsidies for serving free or reduced-price meals to low…

A student pays for food, including ala carte fries, during lunch at Waterford High School, 100 Field Drive, on Thursday, March 20, 2014. The school could not serve the fries in the coming 2014-15 school year under new National School Lunch Program food healthiness requirements. / Lindsay Bullock lindsay.bullock@journaltimes.com

Students take fruits and vegetables during lunch at Waterford High School, 100 Field Drive, on Thursday, March 20, 2014. Students are required to take the produce every day under the National School Lunch Program, but school officials say much of it ends up in the garbage. / Lindsay Bullock lindsay.bullock@journaltimes.com