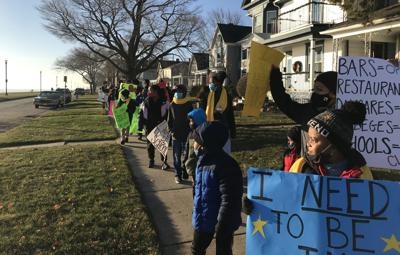 RACINE — It has been a trying year for Joy McClelland and her family. The closure of school buildings, ordered by the City of Racine due to the coronavirus pandemic, has made life even more difficult for McClelland and her surrogate granddaughter, Mira Payton.

About a year ago, Payton came to live with McClelland and her husband after a tragedy in Payton’s family that meant she could no longer live there. When the pandemic first hit last spring and schools first closed their doors, McClelland and her husband took turns staying home with Payton to keep her on track with virtual learning. Payton, 10, was already behind in school. She has attention deficit issues, making remote learning especially challenging for her.

Three weeks ago, McClelland’s husband died unexpectedly. When schools were ordered closed, beginning Nov. 27, McClelland had to figure out how to continue working and ensure that Payton was supervised and keeping up with her schoolwork as they were both still in the throes of grief.

“Strangers who sit in an office in a locked city building are telling parents and caregivers what is in their child’s best interest,” McClelland said. “They don’t know. They don’t know this child. They don’t know about her learning problems or her attention problems.”

A group of several dozen Renaissance Lutheran School-Villa parents, staff and students on Wednesday morning marched from the school at 1510 Villa St. to Monument Square in the hopes of bringing attention to stories like Payton’s and to protest the mandated closure of school buildings in Racine.

City of Racine Public Health Administrator Dottie-Kay Bowersox on issued a public health order on Nov. 12 closing all public and private school buildings within her jurisdiction from Nov. 27 to Jan. 15. That order was challenged and temporarily put on hold by the Wisconsin Supreme Court. But before the Supreme Court put the order on hold, the City of Racine updated its Safer Racine ordinance to include the school closure order. That ordinance is what the city is currently citing in its mandate that in-person schooling is currently illegal, despite the hold on Bowersox’s order. Bars and restaurants in Racine are still allowed to provide dine-in service, but at significantly reduced capacity.

While sixth-grader Jeriah Hawkins said she’s capable of learning virtually or in-person, she knows that not all of her classmates fare the same and that it’s especially challenging for the youngest students. The students struggle with things like internet connections, and some simply learn better through hands-on activities.

“How are you guys going to have bars and stuff open and not schools?” she asked. “Bars are optional. But school? You need that.”

Renaissance is a private school run by LUMIN Schools, based in Milwaukee. Renaissance participates in the Racine Parental Choice Program.

Renaissance Principal Tiffany Engibous said she was shocked when she first learned that the city had ordered schools closed following Thanksgiving until Jan. 15, especially because of all the safety measures Renaissance had put in place. The school’s safety plan was approved by the City of Racine Public Health Department.

“My reaction is just a desire to be able to collaborate with the Health Department and to be able to get some answers and to put some input in prior to a decision like this taking place,” she said. “I understand and value so much the desire to make sure everyone is safe. And I know their job is really difficult right now, as it is for many, but I do think that the input of other administrators and of school administration is really important.”

Renaissance took precautions like limiting in-person classes to 15 students, requiring masks and social distancing, kept kids in the same room all day so they’re only exposed to those classmates, and practiced regular cleaning and sanitizing. Families who are not comfortable with in-person learning have the option to go virtual.

School officials argue that some students are less insulated from the virus now, while they’re going to day care or are being supervised in groups with kids from multiple families gathering together without the same safety precautions that are in place at school.

"Even though they can see us on Zoom, it’s not the same.”

In one Renaissance family there are 19 cousins staying with their grandparents during the day, and they’re all sharing Wi-Fi.

Engibous said that no cases had spread within the school this year, according to their contact tracing efforts.

Renaissance had originally planned to return to in-person classes on Dec. 8, but withdrew that plan when the City of Racine Health Department reiterated the school would be fined if it opened its doors.

After Renaissance students found out they would not be returning to in-person schooling, middle school science teacher Sam Pustina said she fielded phone calls from six students upset about the change, several of whom were crying.

“To be totally transparent, I was enraged,” Pustina said of the blanket order closing all school buildings in the city.

She said all but three of her 44 students wrote letters to the Health Department expressing disappointment and sadness about not being able to attend classes in person. Pustina also contacted the Health Department, asking for the data behind the decision, which she said she has not received.

“How are you guys going to have bars and stuff open and not schools? Bars are optional. But school? You need that.”

Pustina said she was especially confused with the city’s decision after the nation’s top infectious disease expert Dr. Anthony Fauci, as recently as Nov. 29 told ABC’s “This Week:” “Close the bars and keep the schools open.” He added that the data indicated that the spread of COVID-19 from and among children “is not very big at all” and that community spread is largely driven by indoor seating in bars and restaurants where people don’t wear masks.

When asked during a Board of Health meeting Tuesday about how “Dr. Fauci said we should send the kids back to school,” Racine Public Health Administrator Dottie-Kay Bowersox replied that Fauci’s comments should not be taken as a “one size fits all.” Bowersox attested that, since 20 of the City of Racine’s 112 identified COVID-19 outbreaks (as of Dec. 1) were in schools, they should remain closed amid the ongoing spike.

Bowersox added that “the number of outbreaks” have raised too many concerns for her to believe it’s safe for schools to remain open, despite the federal guidance: “We have concerns about the number of positives that we’ve seen.”

Learning suffers while at home

Pustina’s students were still participating in hands-on labs when they were learning at school, but now keeping their attention is much more difficult.

It’s also more difficult for her to provide emotional support for her students from a distance.

Shak’la Stephens is a mother of six, five of whom attend Renaissance Lutheran.

“I’m working and also trying to balance with the schooling and it’s just not cutting it,” she said. “Opening our doors is best for our children.”

Stephens believes that the kids aren’t making the personal connections they need through virtual learning, and said they become easily distracted when learning from home.

Pustina added: “Sometimes their teacher is the only face they see that’s a positive inspiration. Now they don’t have that. Even though they can see us on Zoom, it’s not the same.”

Prior to the city's restrictions closing of school buildings, one RUSD teacher said that he and his 7-month-old son both contracted COVID-19 after the district would not allow he and his wife — who is also a Unified employee — to both work from home so they would not have to send their son to daycare.

That teacher told the School Board that the district gave them the option of one of them staying home on any given day while the other was required to report to work in person. They decided that wouldn’t work for their family and instead chose to both return to work in person and send their son to daycare.

Four days after his son came home from daycare with COVID-19, his father tested positive as well.

“If RUSD had been more flexible, if we have both been given the option to work from home, thus giving us the option to keep our son at home, it’s likely that he and I would still be healthy,” the teacher said in written comments.

A private elementary school in the City of Racine has backtracked on a plan to welcome students back to the school building while a city ordinance prohibiting in-person schooling remains in effect.

RACINE — The City of Racine is still banning schools from having students and teachers in their buildings within city limits through Jan. 15, … 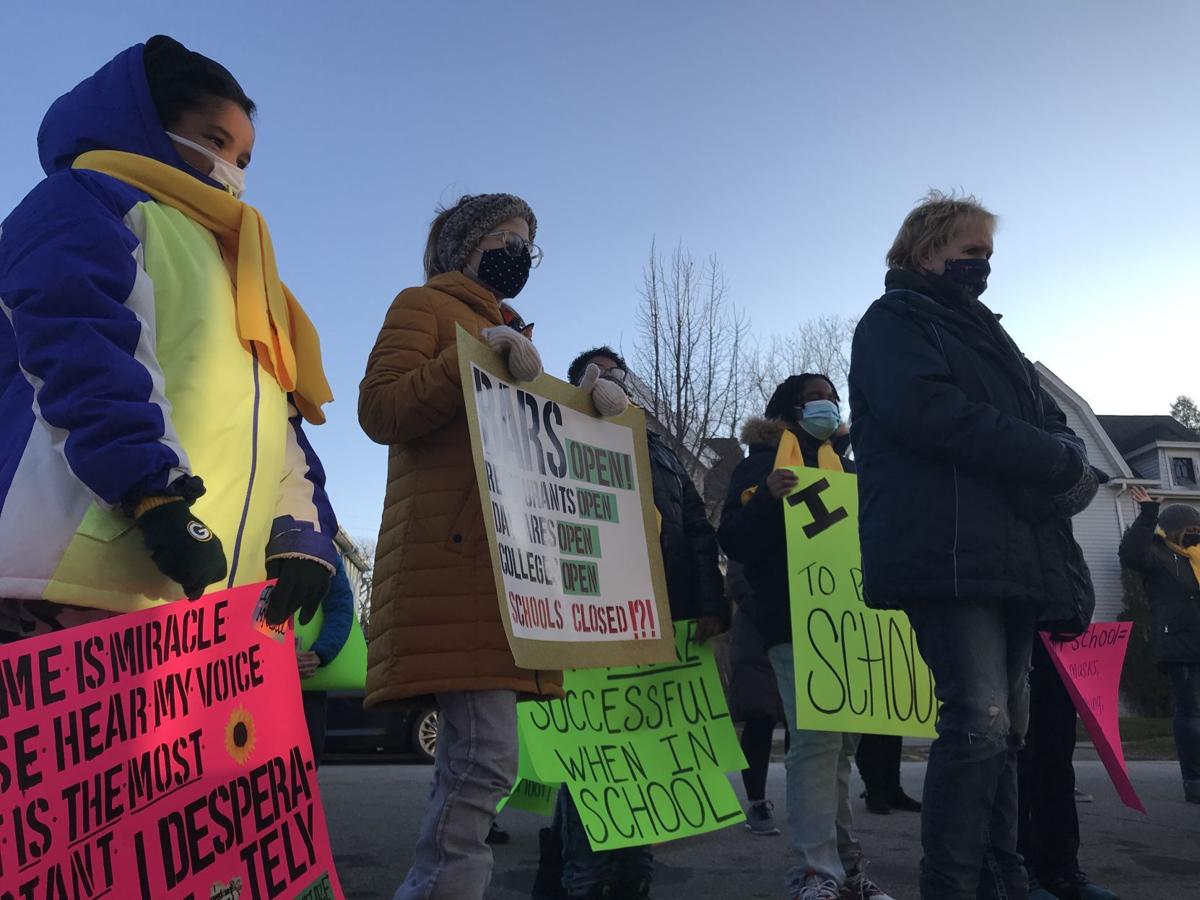 Mira Payton, 10, at left and her surrogate grandmother Joy McClelland at right, along with other parents, teachers and students gather Wednesday morning in protest of the City of Racine's school closure ordinance. 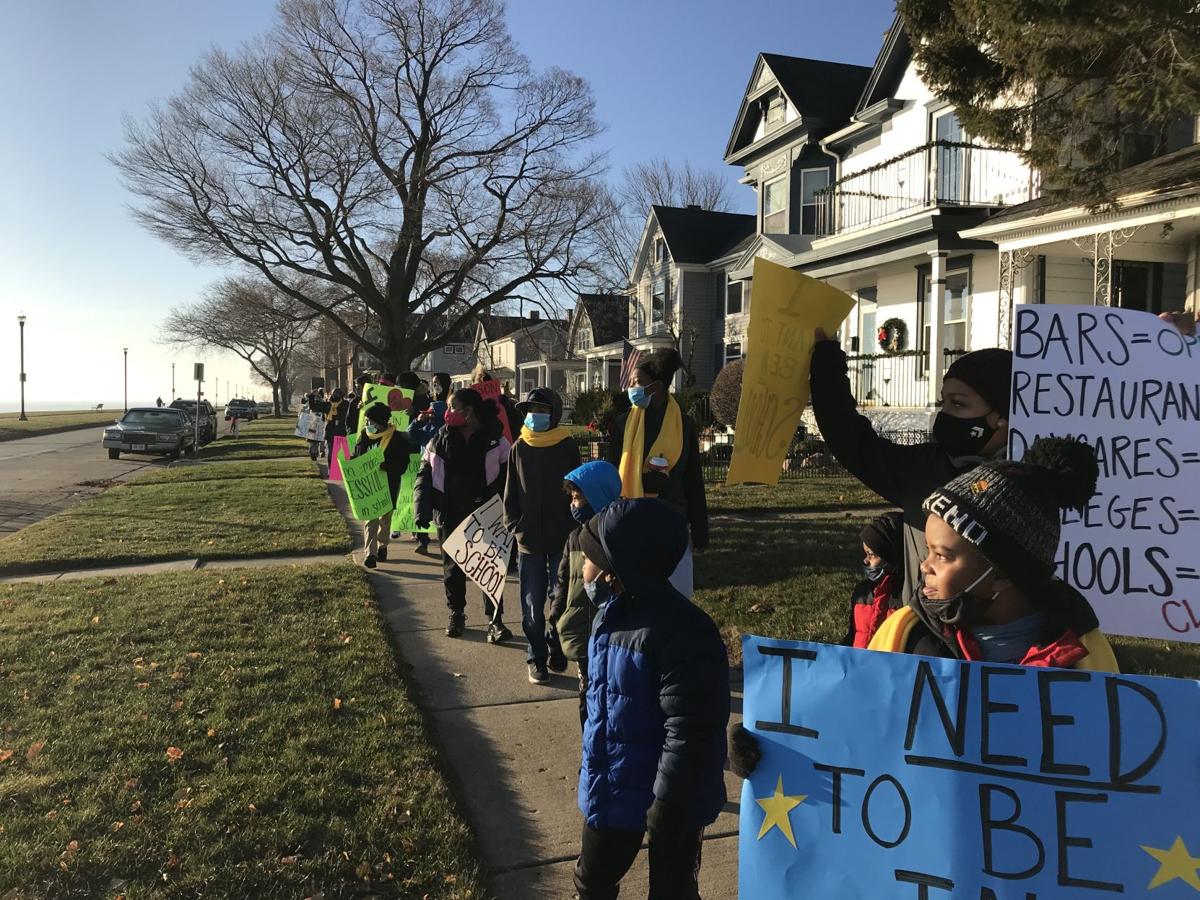 Renaissance Lutheran parents, students and teachers react as a driver honks in support of their march through Racine to protest the portion of the city's Safer Racine ordinance that orders all K-12 school buildings closed from Nov. 27 to Jan. 15. 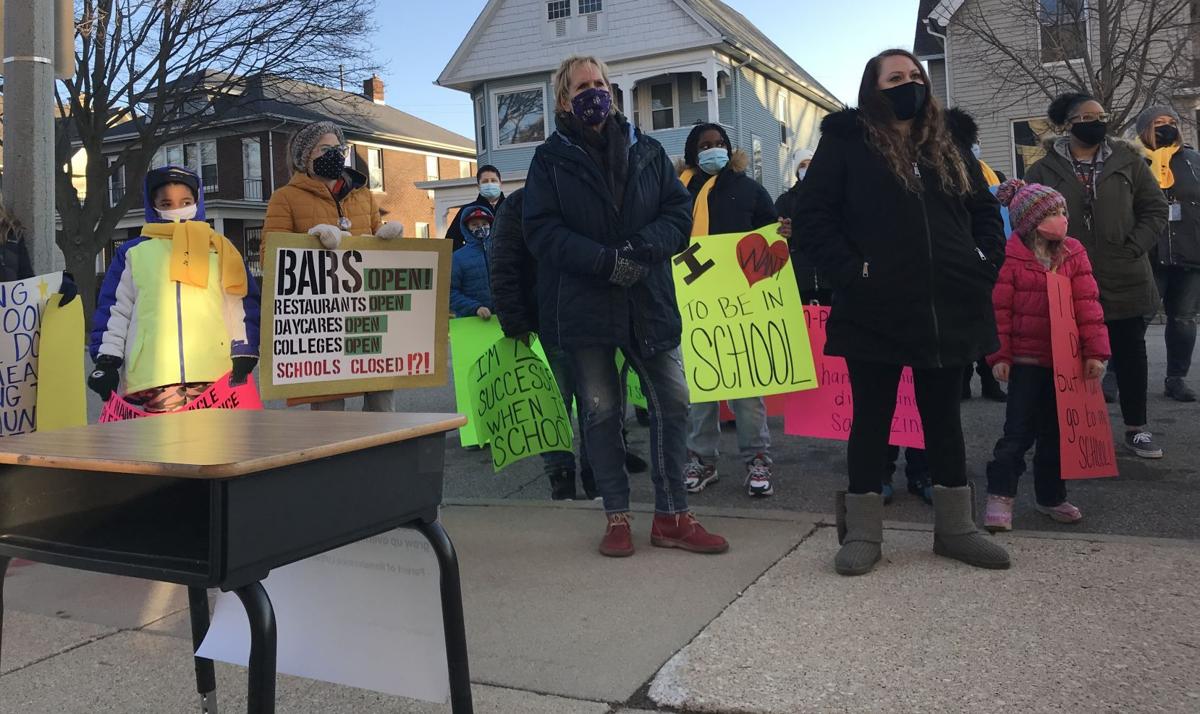 Parents, students and teachers gather at Renaissance Lutheran School-Villa in Racine on Wednesday morning to protest the portion of the city's Safer Racine ordinance that orders all K-12 school buildings closed from Nov. 27 to Jan. 15.