Become a Member
Read Today's E-edition
Share This
Watch now | No Holiday Train, no problem: The Depot tavern and Raymond School team up for a food drive
0 Comments
Share this
Diana Panuncial

CALEDONIA — At one point recently at Raymond School, the hallway near the main entrance of the school was close to being completely blocked. By boxes of donated food.

The food bank made its final stop at the school on Tuesday. By Tuesday morning, at the end of the food drive, the school had a total of 4,990 food items collected, according to The Depot’s co-owner, Sue Gracyalny, with the total weight of the donation being 3,930 pounds. (That’s the same weight as a full-grown killer whale.)

When the food bank stopped at the school mid-November, Gracyalny — who is organizing the food drive — said the students had already amassed over 850 pounds, meaning that about three-fourths of the nearly two tons of donations came in just two weeks.

“Give yourselves a round of applause,” Gracyalny told the Raymond students. And they did.

The Depot Restaurant and Tavern will be collecting food donations at 11402 County Road G or Parker Power at 11333 County Road G, until Dec. 5. Monetary donations are also an option, said Depot owner Sue Gracyalny. Raymond School is hosting a blood drive, the second of its ways of giving back this holiday season, from 9 a.m. to 2 p.m. on Saturday at 2659 South 76th St. For more information on the blood drive, visit www.facebook.com/RaymondPanthers. For updates on the Depot's food drive, visit www.facebook.com/TheDepotonG.

These food drives can be essential. According to Feeding America, food banks distributed the equivalent of 6 billion meals to Americans last year; and, in the first days of the pandemic, 40% of those getting help from food banks were going to food banks for the first time.

The food drive was held in lieu of the Canadian Pacific Holiday Train making a stop near the Depot, where it made its first and only stop in 2019 since the COVID-19 pandemic.

The CP Holiday Train travels coast to coast collecting monetary and food donations that it distributes to each stop’s local food banks. Since its inception in 1999, it has raised over $19 million and more than 4.8 million pounds of food.

The train did not stop for the 2020 holiday season because of COVID-19 concerns, and it was cancelled again this year;. But Canadian Pacific will be hosting a virtual celebration (with “stops” in Wisconsin) where it will still donate to food banks across the country.

“Everybody’s bummed,” Gracyalny said of the holiday train not making a comeback for the second year in a row. “It’s kind of like the holiday kick-off around here.”

Despite the news, Gracyalny mobilized and set up a food drive for Racine County Food Bank anyway, partnering up with Raymond School after seeing how the students performed in their fall fundraiser.

“The students were just amazing, they’re so charismatic and hard working,” she said.

She also hosted a food drive at the Depot, inviting local youth — such as pageant winners and costumed characters — to gather donations.

Giving back in a big way

Gathering donations was a way for the students to unite toward a good cause, since they weren’t able to do so last holiday under COVID-19 precautions, said Stacy Stock, a seventh- and eighth-grade language arts teacher and adviser for the student council.

“We asked the kids, ‘What are some things you think we can do for both our school and for our surrounding community?’ And it was just a resounding answer of, ‘Food,’” Stock said.

The top three classes who contributed the most to the total of 4,990 food items collected would be given a prize, “not that they needed one,” Stock said.

Cameron DaPra, seventh grader and student council officer, led the way to recruiting his peers — and the 49 other student council members and three other officers — to contribute to the food drive. The school’s parent-teacher organization chipped in, too.

Giving back in a big way is something new for Cameron, he said, but seeing the results has made him feel “pretty happy.”

When asked if he expected such a large amount of food to be donated, Cameron shook his head and grinned. “I was expecting, like, a smaller amount.”

Donating food has also made Cameron and his classmates feel accomplished because “Christmas is coming up. And people are needing to go and get food, but they don’t have the money for right now because of COVID.”

In photos and video: The Depot and Raymond School's 2021 food drive

Food drive at the Depot

That's a lot of stuffing

Burlington's city planner is cautioning that the development would take place on land that has historic value, as well as environmentally sensitive wetlands. "The proposed plan seems aggressive," he wrote in a report.

RUSD student's mom wants action against ex-employee who injured him

A man who worked for RUSD is no longer employed with the district after he allegedly, while trying to stop a student suffering an episode brought on by mental illness, left marks on a student's wrist that lasted for weeks.

21 schools in KUSD move to virtual learning due to COVID

The Kenosha Unified School District has moved 21 schools to virtual learning reporting COVID-19 cases at or above the district’s 3% threshold policy, as of Monday.

Investigators are seeking help to identify a suspect in the Nov. 12 illegal shooting of a trophy-caliber deer near Waterford, in an incident that police call "disturbing," partly because it happened in broad daylight near homes. 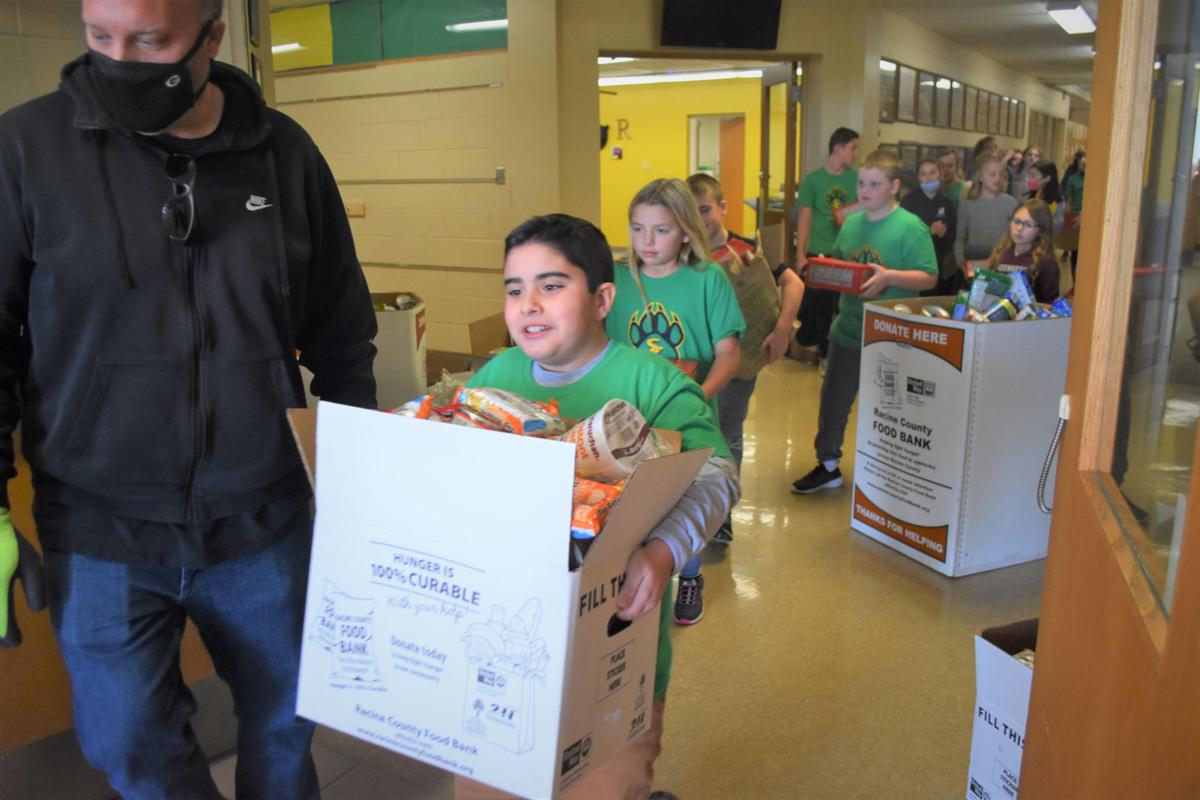 Noah Childers, Raymond School fourth grader, leads the way as other students haul out boxes for the Racine County Food Bank on Tuesday. 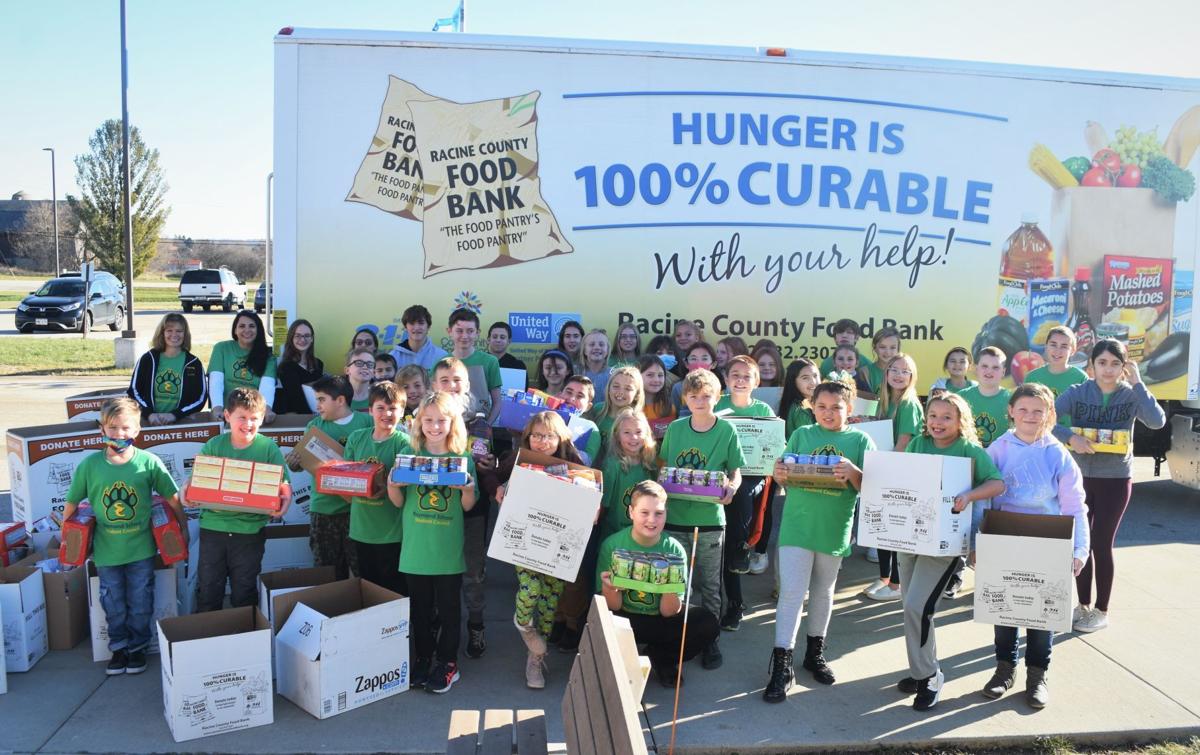 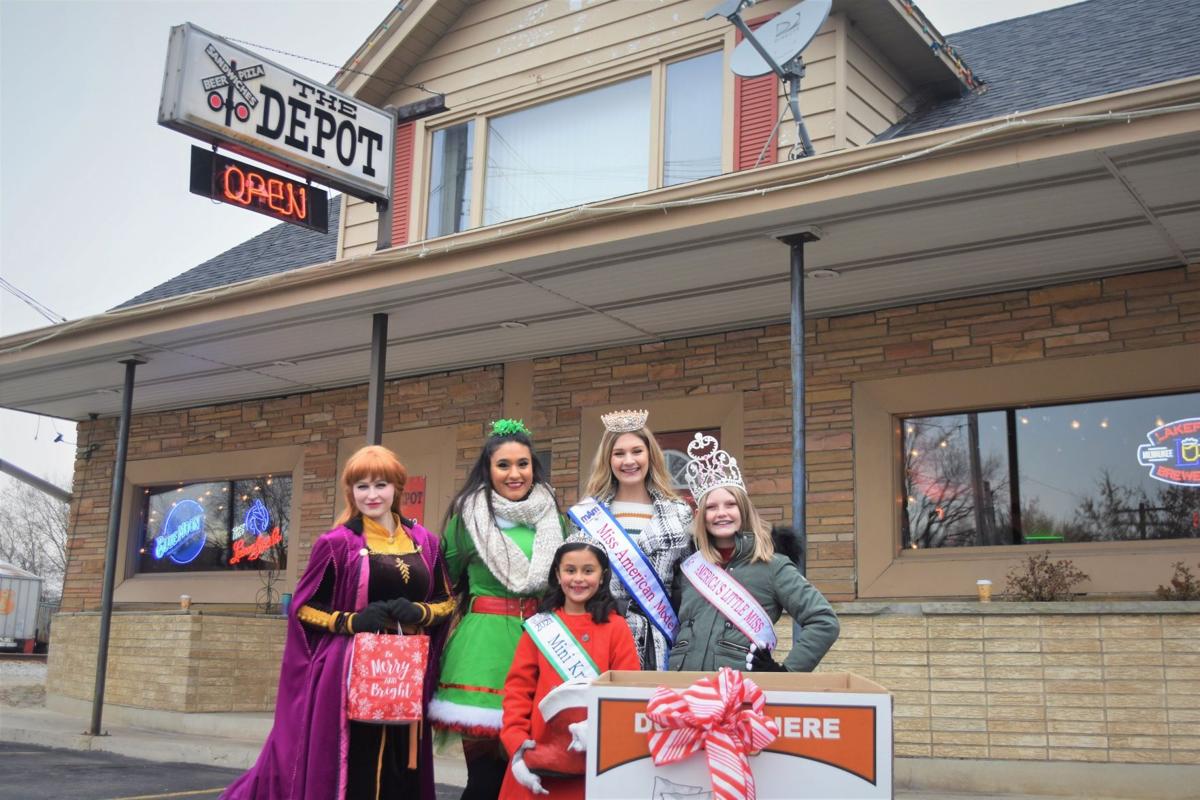 From left, in back: Rayne Kleinofen and Ashley Rodriguez, dressed up as characters from the Fairytale Birthday Company in Franksville; and Madi Long, Miss American Junior Model Teen 2021. From left, in front: Tali Heller, Mini Kraut Princess; and Ava Pinnow, America's Little Miss. The group was seen outside the Depot Restaurant and Tavern on Saturday, Nov. 27, encouraging donations for the food drive. 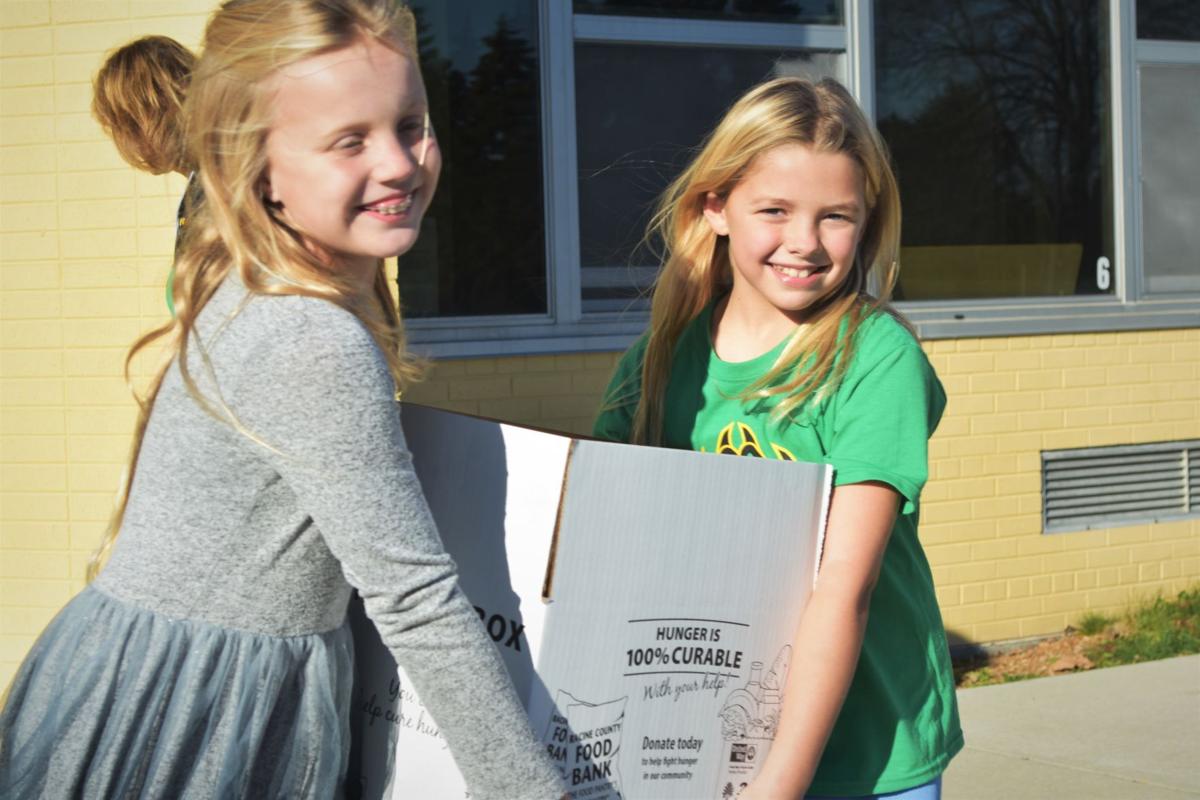 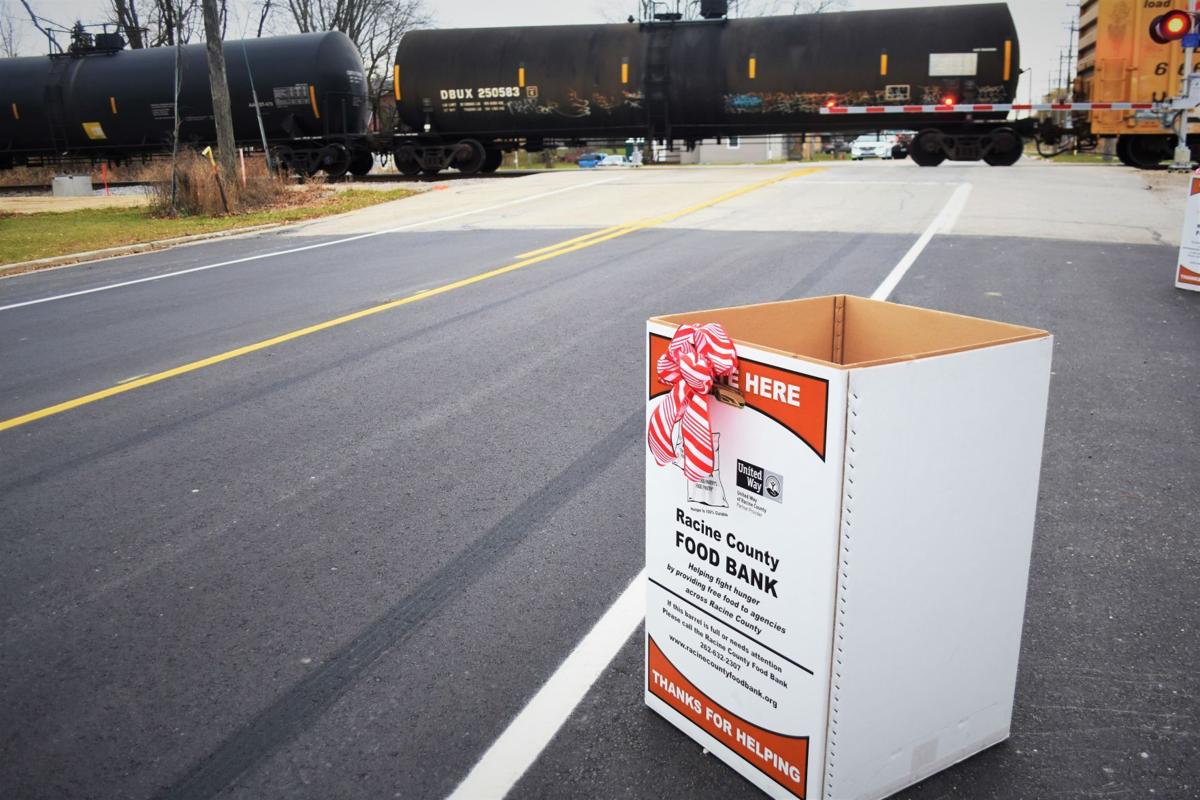 A box from the Racine County Food Bank stands outside the Depot Tavern and Restaurant on Highway G near the train tracks, where a Canadian-Pacific train is seen cruising through on Saturday. The CP Holiday Train made its first and only stop at the Caledonia tracks in 2019 after Depot owner Sue Gracyalny rallied for a stop, gathering food and monetary donations. It did not return in 2020, and will not return again to any stops in 2021 due to the ongoing COVID-19 pandemic. 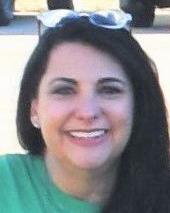 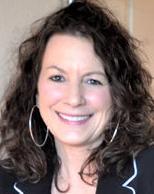