RACINE — A quote hangs over the writing desks inside Balanced Vision Wellness Boutique.

As said by Audre Lorde, a black poet and activist: “When I dare to be powerful, to use my strength in the service of my vision, then it becomes less and less important whether I am afraid.”

It’s but one of the talking pieces inside the new boutique in the lower level of 500 Wisconsin Ave. in Downtown Racine, owned by Air Force veteran and wellness coach Tessa Thompson.

Other eye-catching elements of the boutique include colorful paintings of black women, more quotes of empowerment and copies of Thompson’s published guided journal, “Royalty Journal: A Collection of Affirmations, Quotes, Inspiration & Reflection For Women.”

Thompson, 40, wanted the boutique to reflect her identity: “I didn’t always see pictures of me in the library, or pictures that incorporated my culture … so I wanted to bring myself to my space.”

Thompson got the chance to share her space for the first time with friends, family and other supporters during her grand opening on July 17. Her boutique sells wellness products such as essential oils and weighted blankets, but it also doubles as a workspace for hosting events.

Balanced Vision aims to be a safe space for anyone to talk openly about their personal wellness and mental health organically, Thompson said. As a full-time social worker in the Kenosha Unified School District, she said she has seen many students struggle with opening up.

Through Balanced Vision, Thompson hopes she can “normalize (wellness) and make it something that is talked about and not stigmatized.”

According to the National Institute of Mental Health, in 2019, there were an estimated 51.5 million adults in the United States with any mental illness (AMI). The prevalence of AMI was higher among women (24.5%) than males (16.3%).

In the same year, a survey by the American Psychological Association revealed Americans are becoming more open about mental health — 87% agree having “a mental health disorder” is nothing to be ashamed of — but there’s still some stigma.

For example, 33% agreed with the statement, “People with mental disorders scare me,” and 39% said they would view someone differently if they knew that person had a mental health disorder.

To combat that stigma, Thompson said she hopes to be able to start conversations about personal wellness and wants them to start organically. She wants to help clients answer questions like, “What affirmations and rituals of self-care can I implement into my daily routine?” so it feels more natural and less intimidating — something she calls “intentional wellness.”

For example, Thompson will host a makeup event for women of all ages to learn about makeup and self-confidence. “It’s the external and the internal,” she said.

“As women, we have so much on us that we feel like we have to always have it together, and you don’t have to be this superhero,” Thompson said. “That’s not what it’s about. It’s about being vulnerable. It’s about finding your light, finding your way, and having spaces inclusive enough to be able to do that.”

For “Royalty Journal,” Thompson gathered notes written by mothers to their daughters and other women in the community to form guided journal entries.

A mother of six, Thompson created the journal to strengthen her own bond with one of her teenage daughters, whom she adopted.

“I was a foster parent … realizing things about her mental health,” Thompson said. She shared that her relationship with her adopted daughter was not always the strongest; she fixated on things she couldn’t control, negatively affecting her mental health.

Her relationship with her adopted daughter, as well as negativity from her previous marriage, caused Thompson to look at how she could improve her situation. She said a lot of her mental healing and self-care is based on focusing on what she can control.

For example, Thompson hopes her makeup event will encourage women to see getting ready for the day as a positive, uplifting and confidence-building routine.

Dedication to her friend

Thompson dedicates the boutique to her best friend, Mary Alice Ward, who died by suicide in 2019.

Thompson and Ward were best friends for 24 years and joined the military together, alongside Ward’s cousin Monica, in 2000. They served in the Iraq War.

“She was a counselor herself … she committed suicide within just a few hours of us talking to each other,” Thompson said.

In a lot of ways, Thompson is still dealing with grief, but that pain was pivotal in her addressing her own mental wellness.

Ward’s father, Joseph Burns — a fellow veteran who had encouraged the three young women to enlist in the military — said he was “floored” when he heard the boutique was going to be dedicated to his late daughter.

“They were such good friends. For her (Tessa) to do something like this, I couldn’t be more blessed,” Burns said. “I just wish that she (Alice) could’ve been here to see Tessa progressing.”

For now, the boutique is open on an appointment- and event-only basis, so it does not have hours. To keep up with opportunities to visit the boutique, check out its Facebook page at www.facebook.com/balancedvison or visit Thompson’s website at www.mrstessathompson.com. 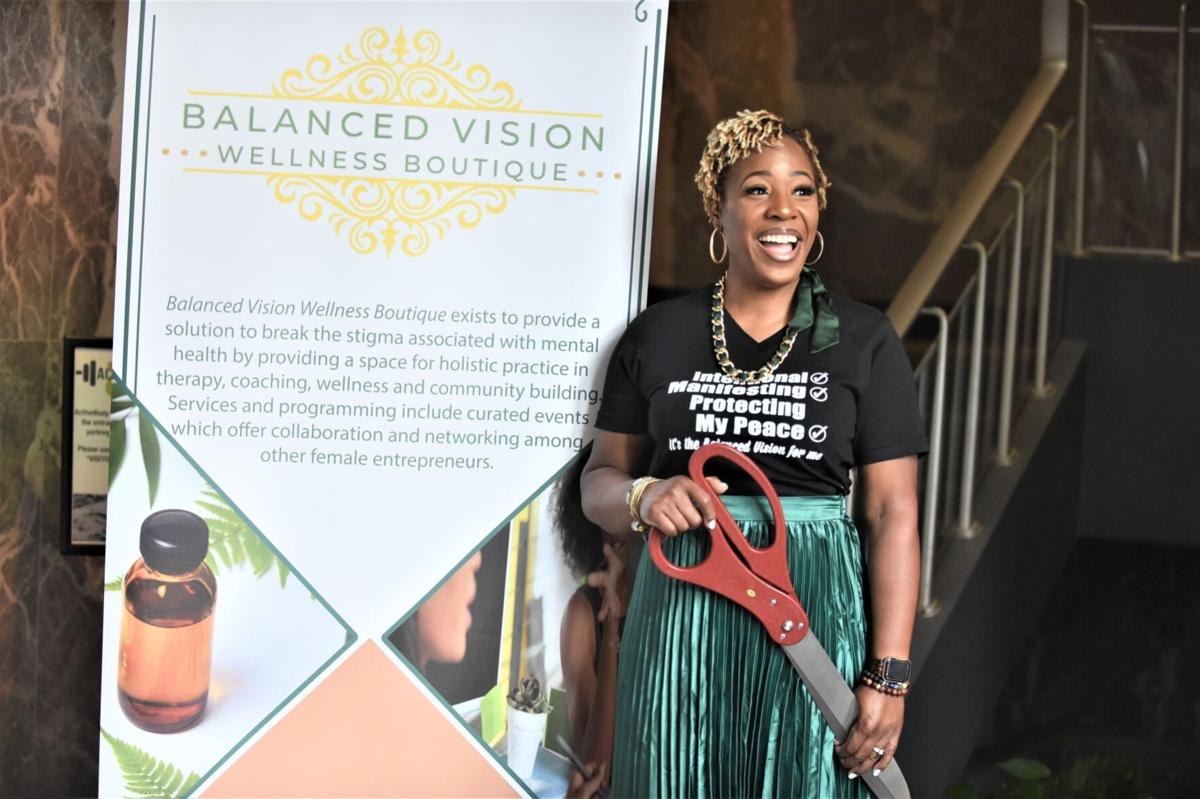 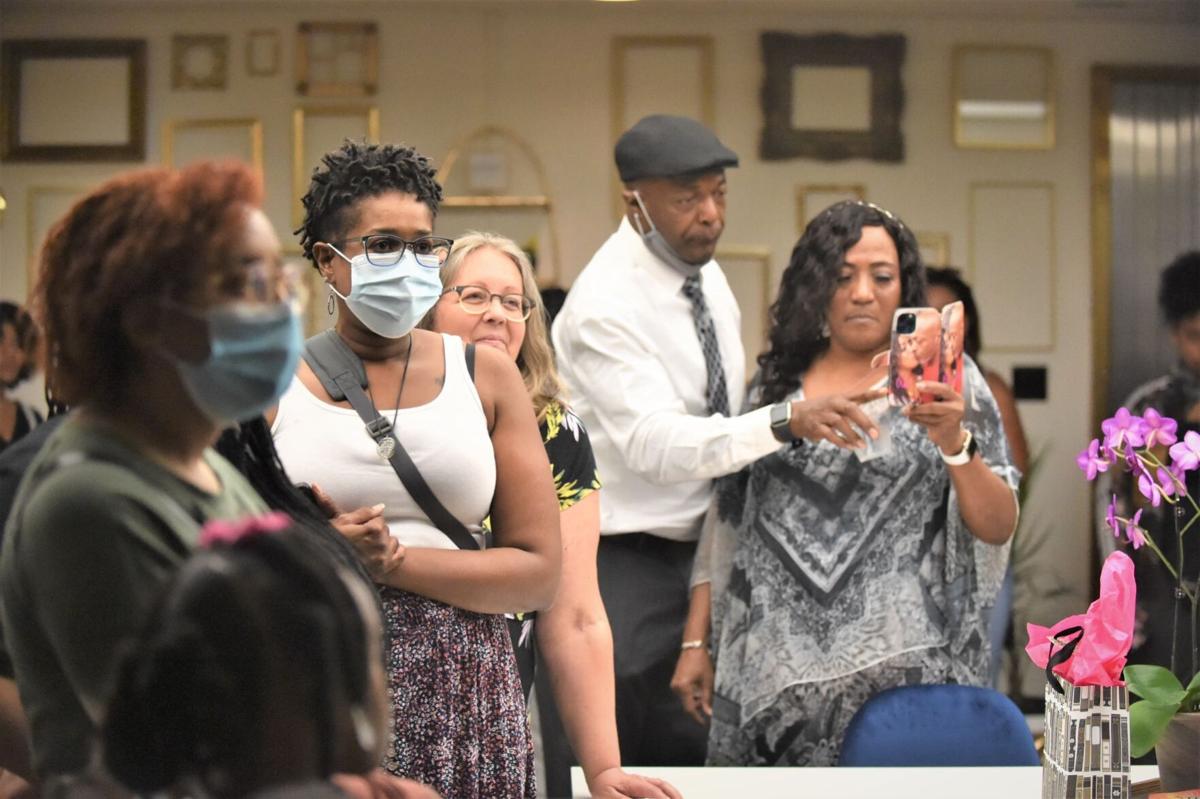 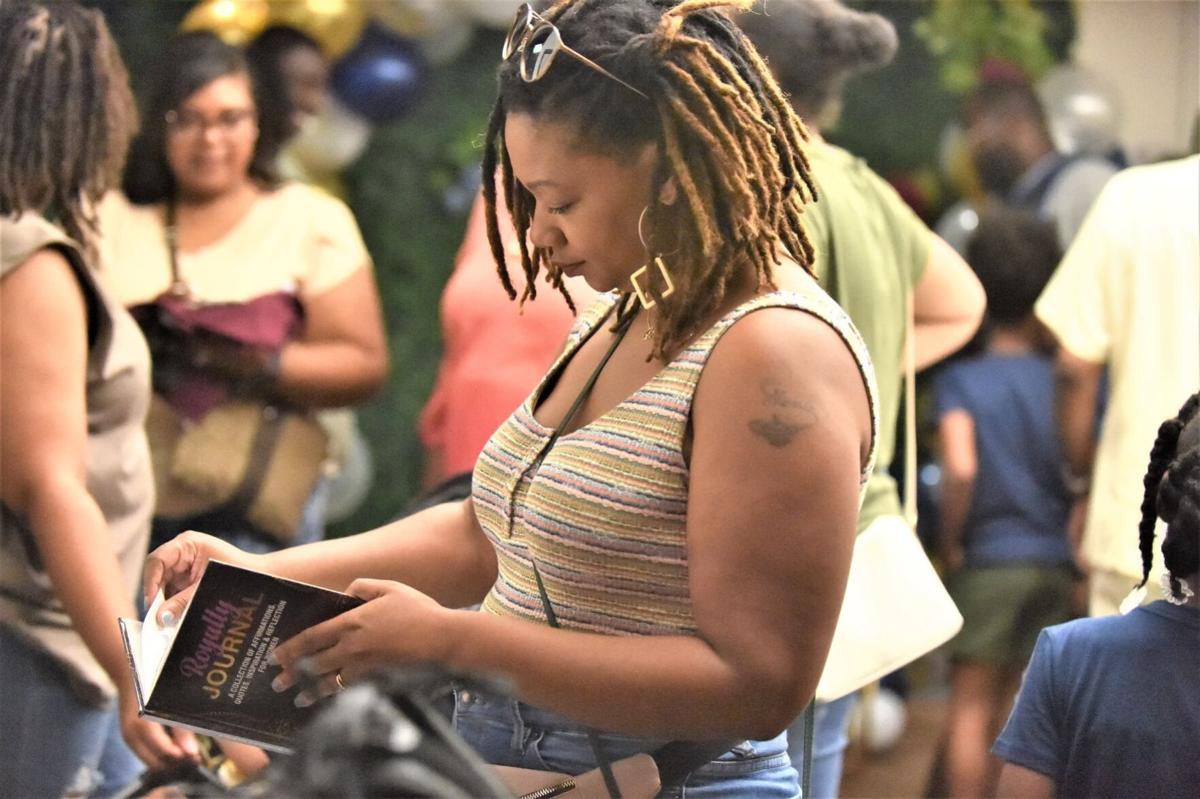 An attendee of the Balanced Vision Wellness Boutique's grand opening flips through Owner Tessa Thompson's Royalty Journal on Saturday. The guided journal is meant for mothers and daughters. 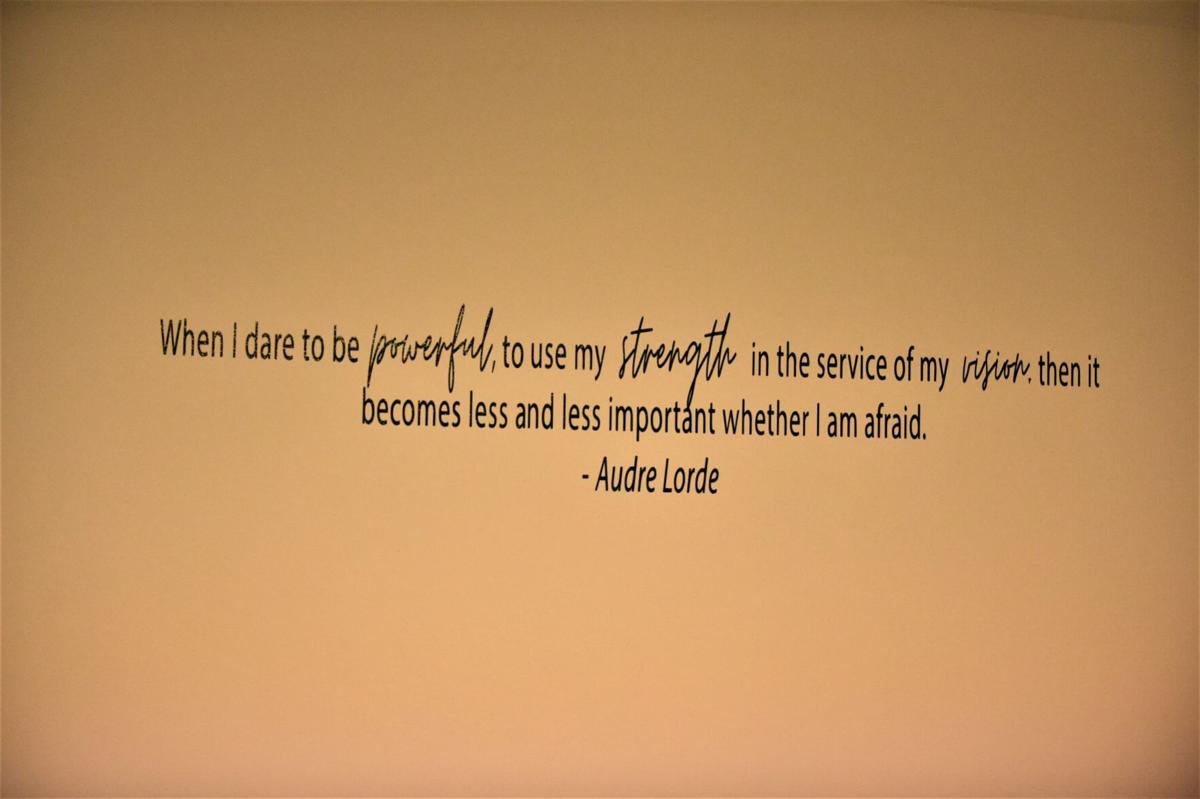 A quotation from Audre Lorde, a black writer and activist, is painted on the wall inside Balanced Vision Wellness Boutique. 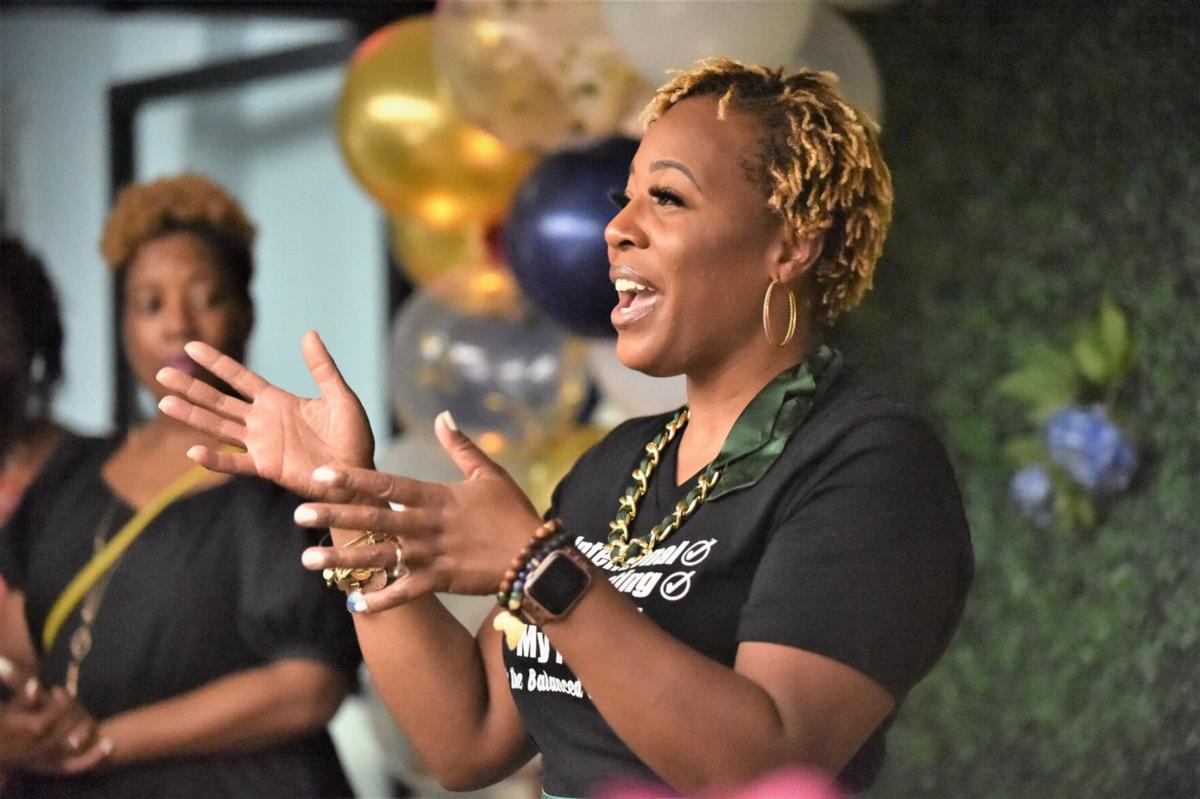 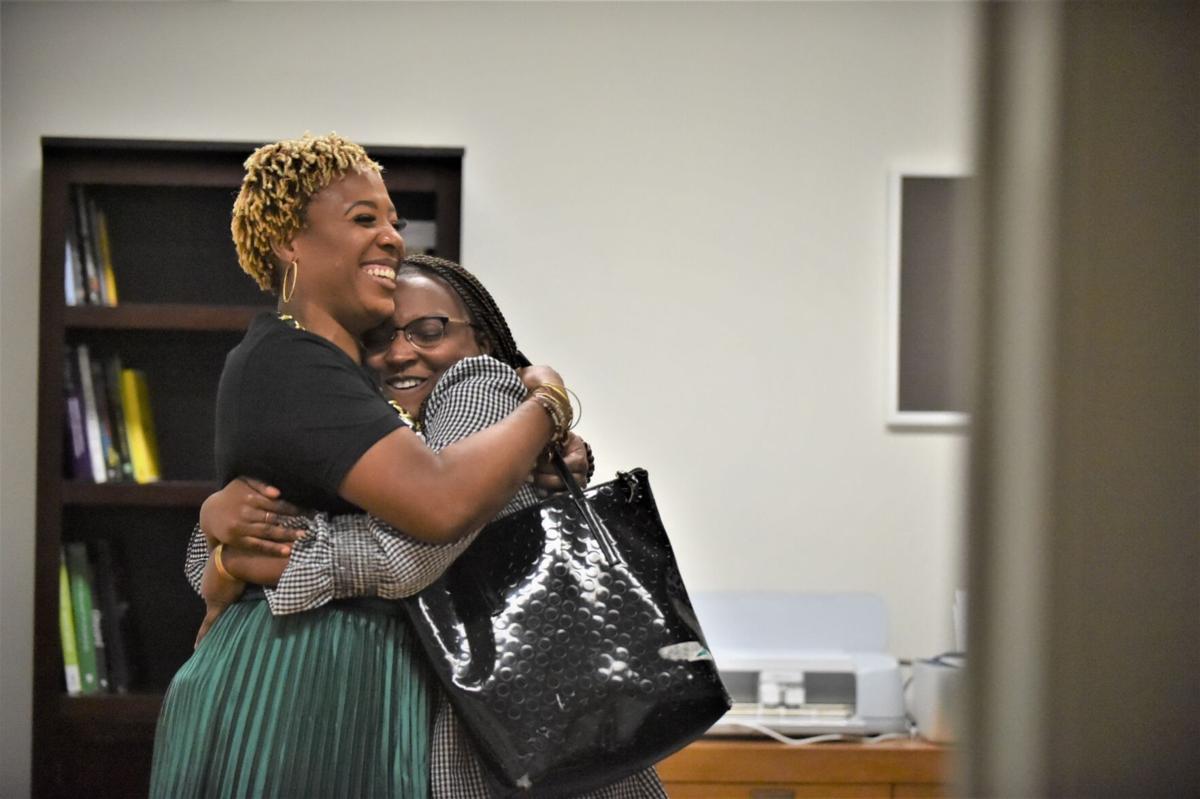 Tessa Thompson hugs one of her supporters on July 17.