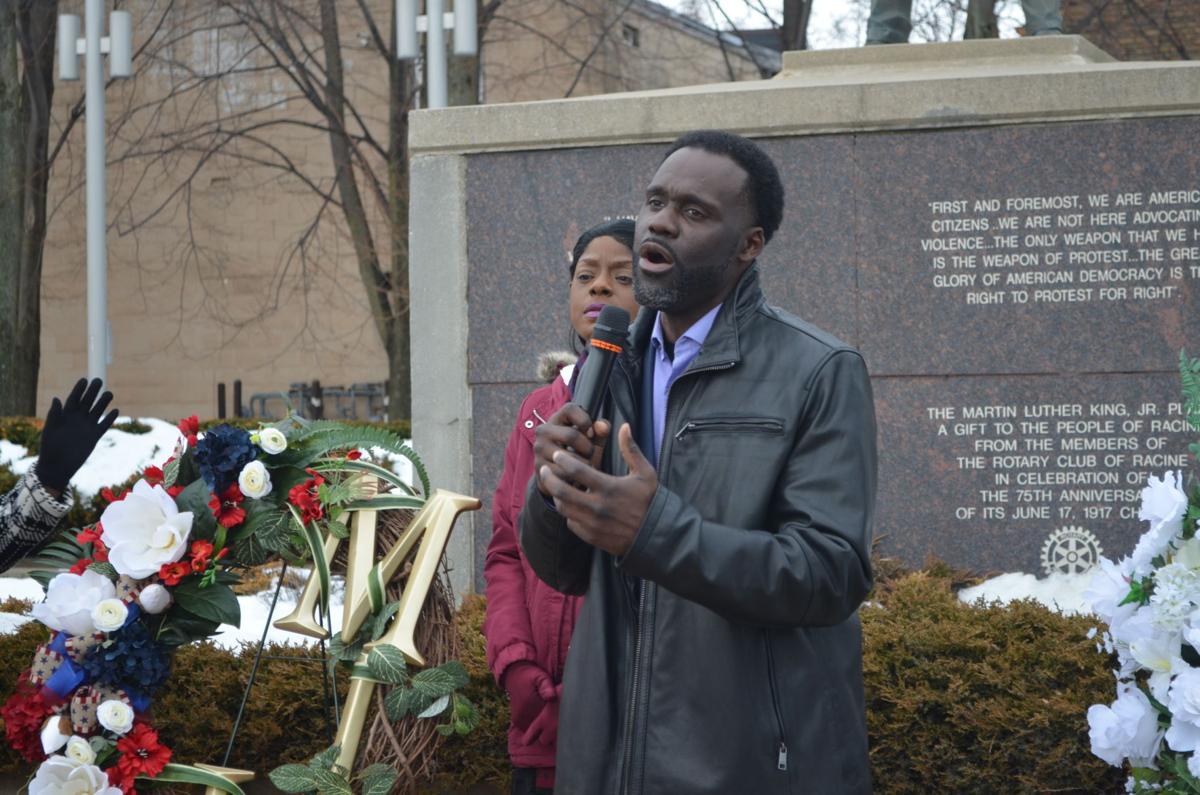 Tiwan Strong sings a rendition of the song "Glory" by John Legend and Common  during a Friday wreath-laying at Dr. Martin Luther King Jr. Plaza in Racine. "Glory" was featured in the 2014 Oscar-winning film "Selma," which portrays the marches from Selma to Montgomery in 1965. 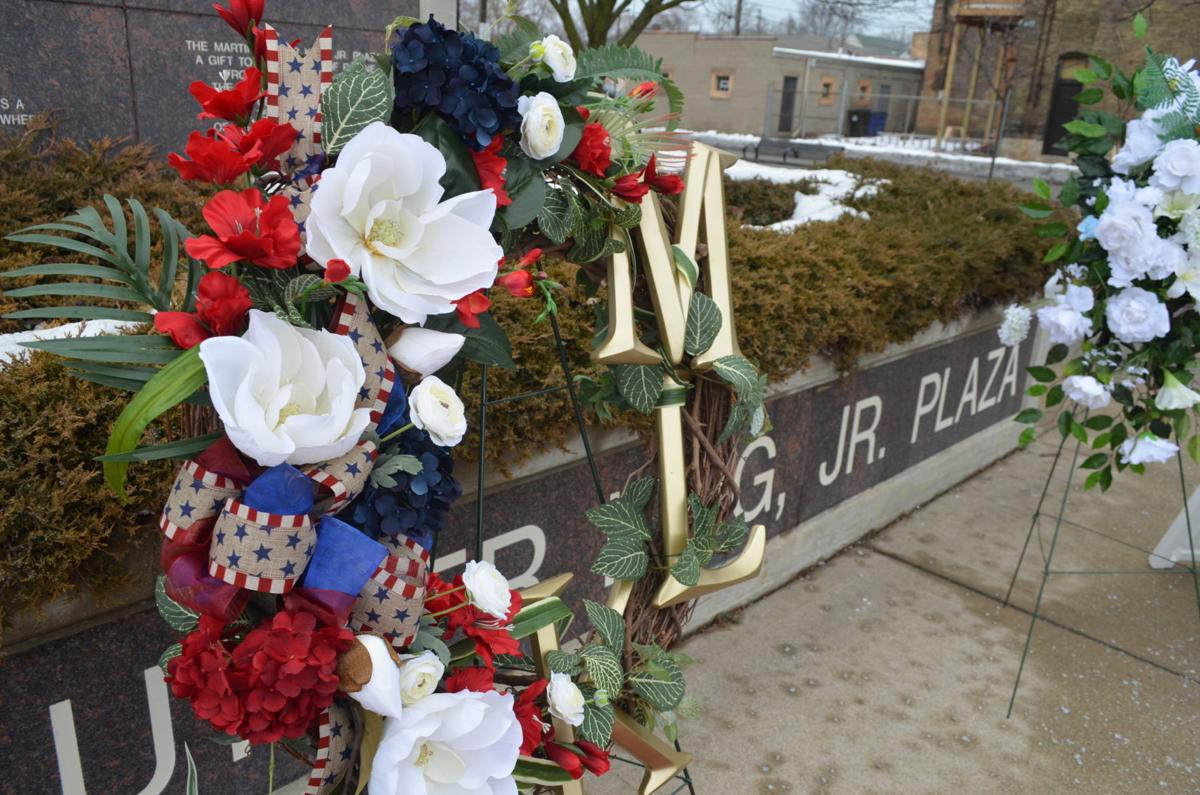 The wreath, which features white and red flowers with MLK's initials intertwined, is seen on Friday after being laid at the plaza that bears his name in Racine.

A wreath was placed at the base of the King statue located in Dr. Martin Luther King Jr. Plaza at the intersection of State and Marquette streets.

“To have this wreath-laying is pivotal,” said Kelly Scroggins, a member of the new group Racine Women for Racial Justice. “It’s time to dream again about a beloved community with equality.”

The laying of the wreath in Dr. King’s memory has been an annual event for 35 years. Lisa Parham, of the Racine Mirror, organized the event along with many volunteers, sponsors and community partners.

There were many speakers from the community, including Racine Mayor Cory Mason and Racine County Executive Jonathan Delagrave. There were also representatives from communities working for justice, such as Milwaukeean Maria Hamilton, whose son was killed by police, which led her to form Mothers for Justice United.

Due to the ongoing COVID-19 pandemic, Sharpton joined the event via Zoom.

He called for participants to remember the resiliency and strength shown by Black Americans throughout their history.

He reminded listeners how horrific the trans-Atlantic slave voyage was. That people were not only chained together but chained down — for the entire voyage, lying in their own waste.

Sharpton spoke of the era of civil rights when Black Americans drove to participate in the March on Washington for Jobs and Freedom, Aug. 28, 1963, while being subject to Jim Crow and random violence. They had to travel with food and sleep in their cars because they could not stop in the South for a bite to eat or a night’s rest in a hotel, Sharpton reminded listeners.

“When I think about the sacrifices and the stress he (King) lived under every day of his life,” Sharpton said, “it would be a lot of nerve to say we can’t face what we face today when he faced so much more.”

He added, while the U.S. is currently going through dark times, the days were brighter than they were before.

Sharpton pointed out many living in the U.S. today have the blood of those trans-Atlantic slaves, and of the civil rights activists, flowing in their veins. “Even in our blood there are the people who knew how to be strong and tough — even in the worst of circumstances.”

There are those even now, Sharpton added, who might not vote if there are any inconveniences to do so, even though their forefathers and foremothers fought and died so they could vote.

Sharpton acknowledged the difficulties of 2020, which seem to have leaked into 2021.

He reminded those listening that before President Donald Trump, the United States had a Black family living in the White House for the first time.

“What is possible for us we have already seen,” he said, later adding, “but we have to be strong.”

Sharpton ended his message by reminding everyone that change is work, and that the work goes on.

Wreath in front of statue

A song for MLK

A prayer during the ceremony

Listening to the prayer

Diana Panuncial of The Journal Times contributed to this report.

Wisconsin's oldest surviving bank building, in Burlington since before the Civil War, to close

Chase Bank has disclosed plans to close its branch in Downtown Burlington, vacating not only a popular business in the Loop but also a historic property that has included a bank since the 1840s, making it Wisconsin's longest continually-operating bank.

Tiwan Strong sings a rendition of the song "Glory" by John Legend and Common  during a Friday wreath-laying at Dr. Martin Luther King Jr. Plaza in Racine. "Glory" was featured in the 2014 Oscar-winning film "Selma," which portrays the marches from Selma to Montgomery in 1965.

The wreath, which features white and red flowers with MLK's initials intertwined, is seen on Friday after being laid at the plaza that bears his name in Racine. 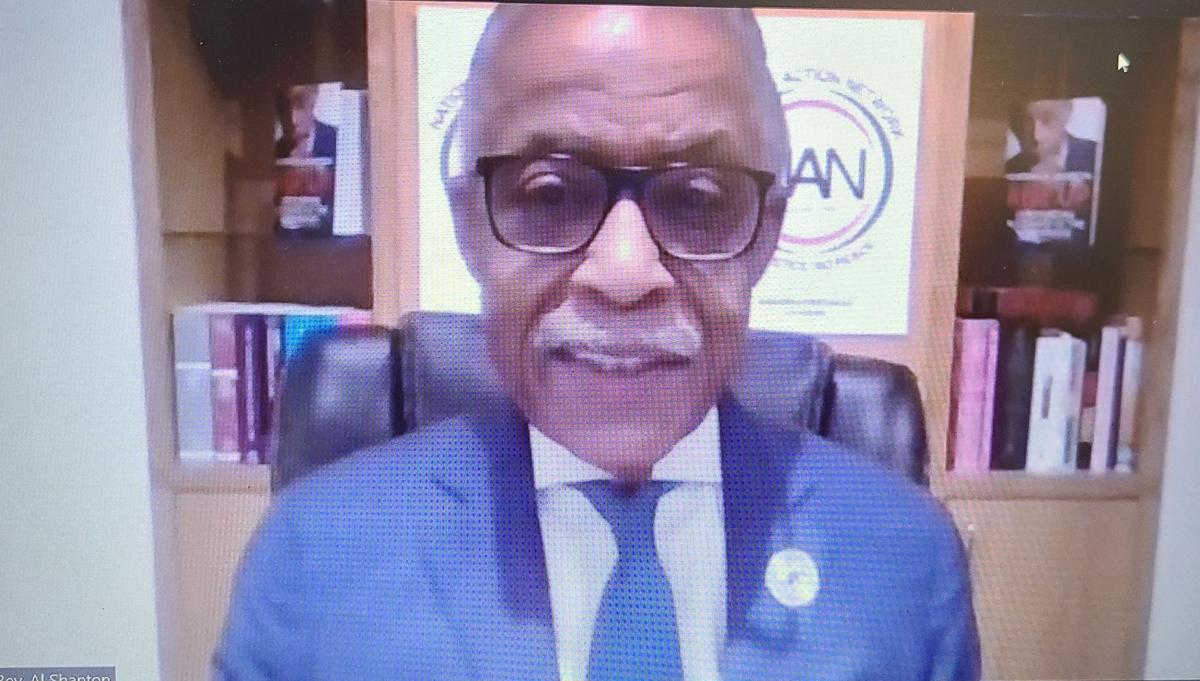